Some giant tuna off Sydney this week, for those fishos able to get wide. Forrest Duncan: 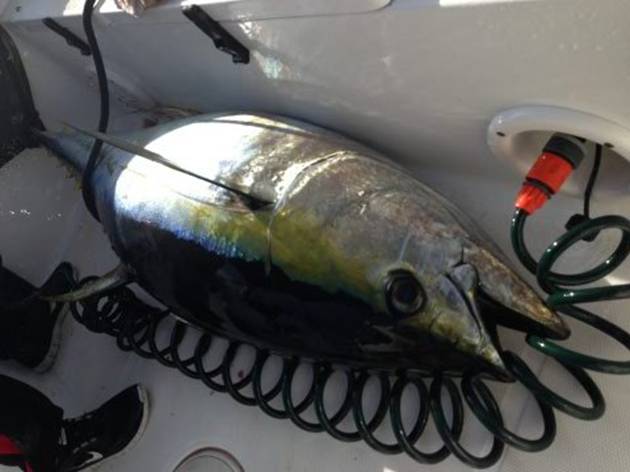 Andy, No.1 son and I picked up 50 and 70kg yellowfin yesterday off Browns, unfortunately (fortunately?) your fish bag just wasn't big enough! 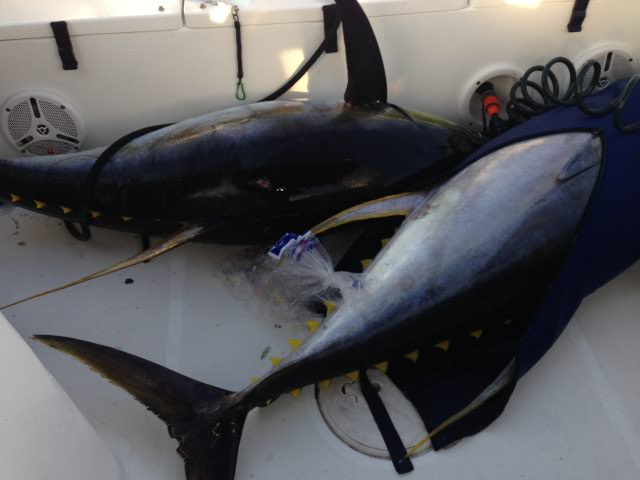 Nice problem to have! Maybe we need a 75 kilo+ model, Forrest? Slade pleased with his neoprene chiller bag too. Big fish don’t fit in an esky, but their quality means they must be looked after:

Andrew, please find attached a photo of a 17 kg spaniard on one of your fish chiller bags. Great for oversized fish in the tropics (Townsville). Cheers. Slade.

Yes they are, thanks for the pic Slade. Dale and Greg fished through Sunday afternoon until late in the evening and scored some beautiful yellowfin, for their efforts: 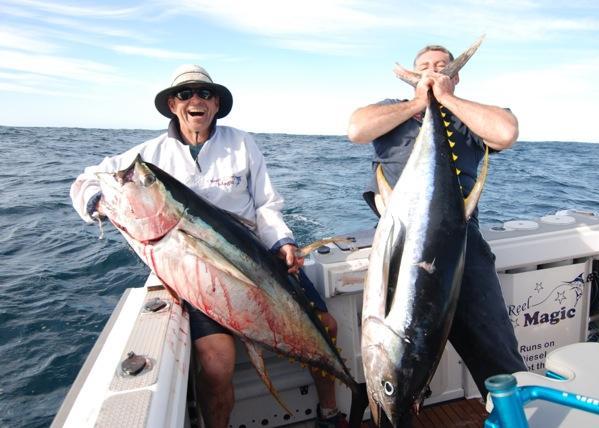 We must be lucky! Some say, 'gee, there must be a lot out there if you guys are catching them! Same area, same water… late arvo bite. 2.6knt south current. Ended up off Point Perp again after dark! Regards, Dale and reelMAGIC 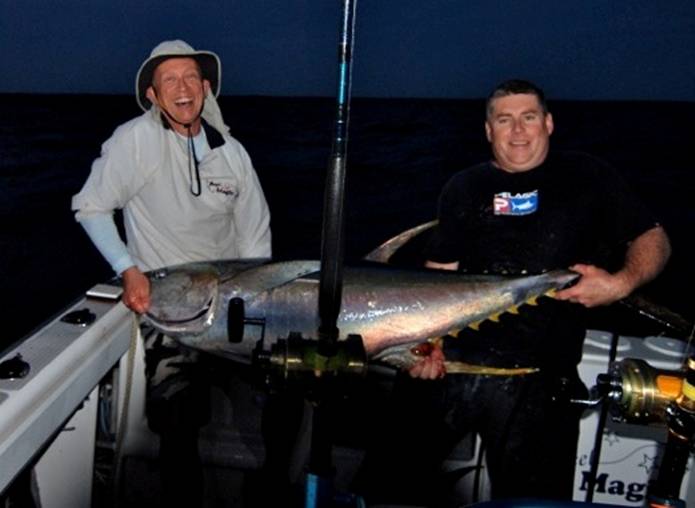 Fantastic lads, and with good weather forecast for the long weekend so many blokes making plans to get out wide. Including me. J Downrigger sales have gone ballistic since the arrival of our new improved model last week, with many clients keen to give it a try. The new star drag system works like a dream: 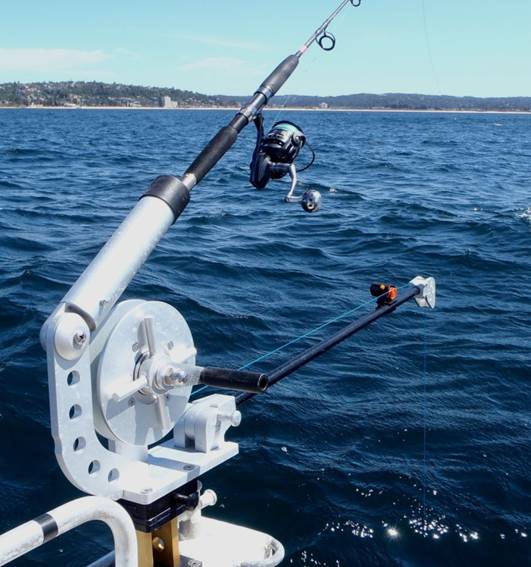 The season has started very early and good kings were taken across the weekend. Here’s one Ben Squire scored off Long Reef on Sunday, in almost the same spot the pic above was taken: 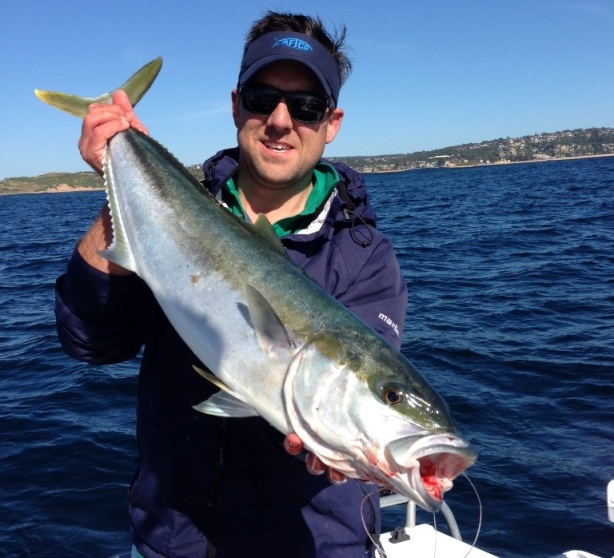 He backed up later the same day, with this beauty from Middle Harbour: Matt Reid from Raptor Charters has been putting his clients onto some nice ones too: 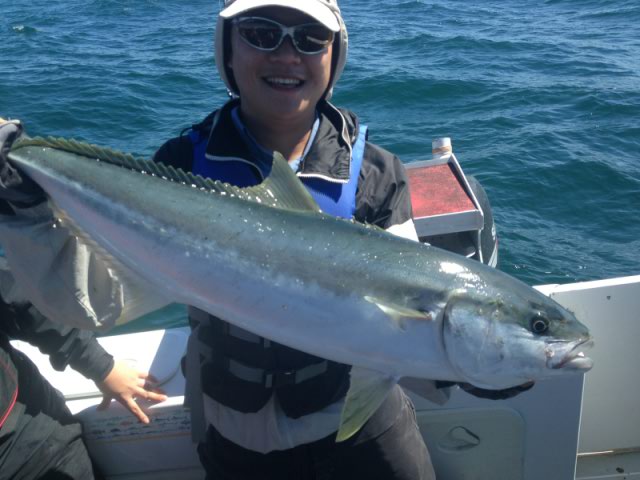 and giving our new overhead combo a workout in the process: 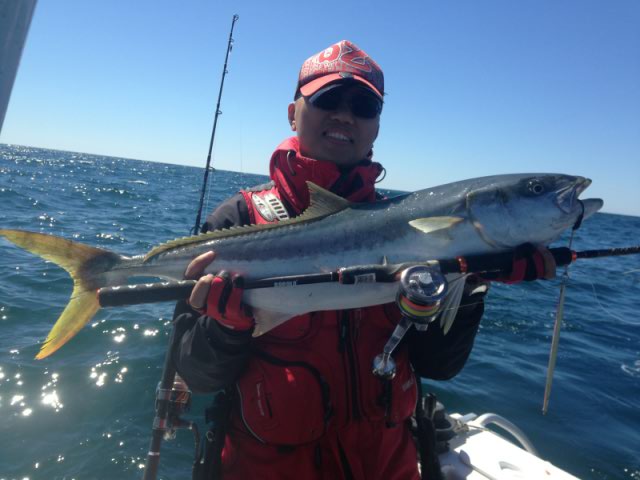 I reckon we’re going to have a big kingfish season, particularly in November/December when larger models come into the Harbour. The always-good Richardson Marine reporting this whopper caught, last Friday: 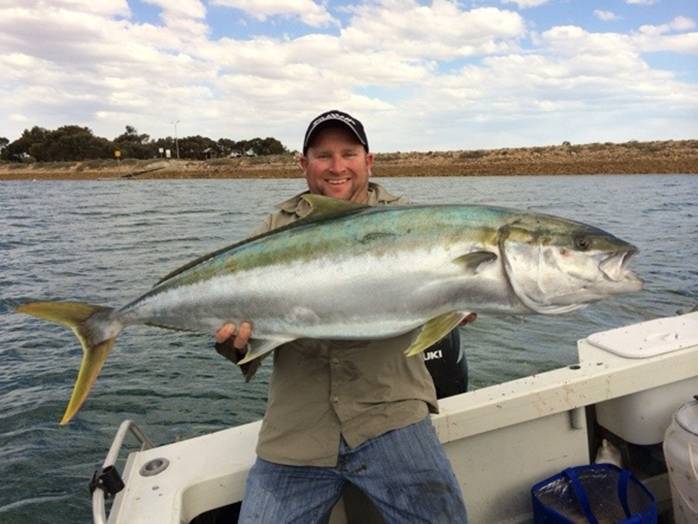 I read somewhere that Cleanseas are tripling their kingfish production at Port Lincoln which makes sense because they thrive, in SA. Closer to home, and Bob Penfold making the most of his retirement: 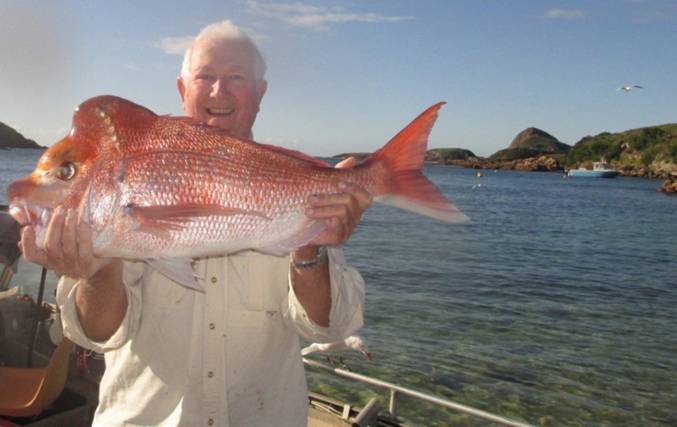 Weather is perfect.  Sea is calm.  Weather warm and sunny (like Florida).  Fish are swarming and I have 6 months supply of great eating filets all vacuum packed and in the freezer.  Lots of work but my friends love em… photo is in Esmeralda Bay on Broughton Island. 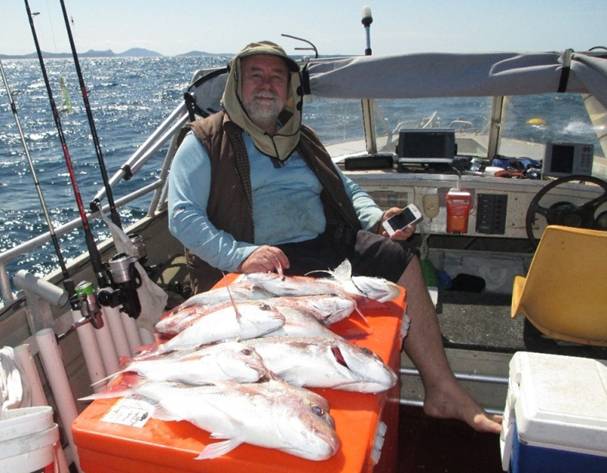 Well done and thanks for your report, Bob. Kevin Preston says spring is well under way, on the south coast: 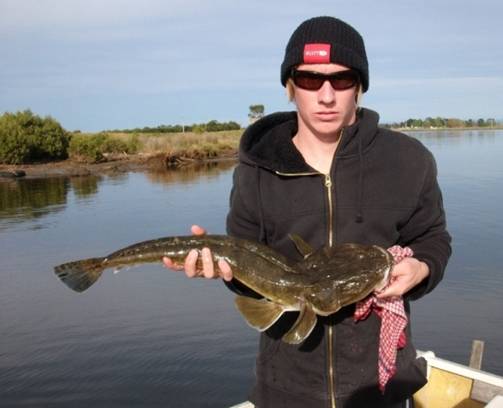 I’d call that a good sign, Kevin. For anyone heading off Sydney this long weekend, throw in the salmon casting gear or even, a flyrod? We popped outside for a quick look on Wednesday, there were acres of them churning the water to foam. Big ones, too: 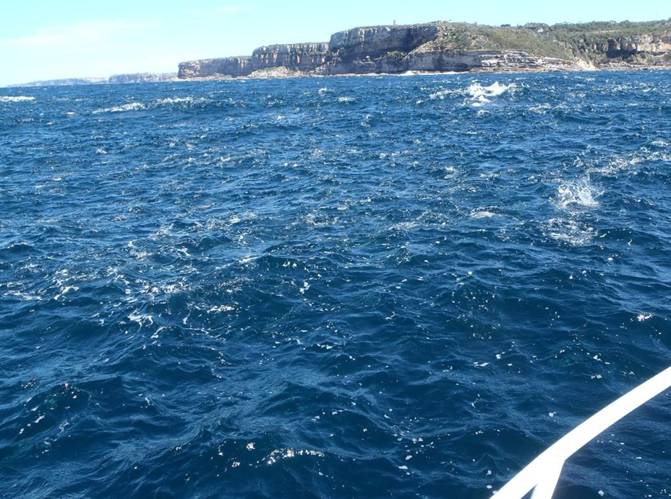 Just ordered a stack of stinger spoons to be shipped in the November order. With the popularity of the Head Start bait and swim head combo we’re keen to try a similar technique using squid. These won’t be expensive:

Speaking of squid, a client stopped by for a downrigger today and had his squid jig box in the car. I took a pic. How’s this, for a collection? Around one hundred there: 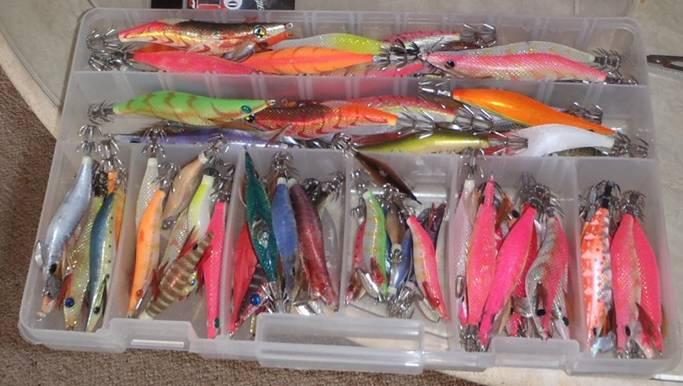 Spotted at Mt Colah this week. It'll take lots of TLC to get this old weapon seaworthy again:

Where would we be, without inventors like Ben Foster?

Hey Andy, I'm mucking around with micro jigging and thought this was worth a laugh. I've extended the butt on this 4ft, 3-6kg Hemingway whip stick, it's a kayak rod that bends back like a ugly stick so thought I target some rats this summer with your 40g jigs. I'll let u know how I go. 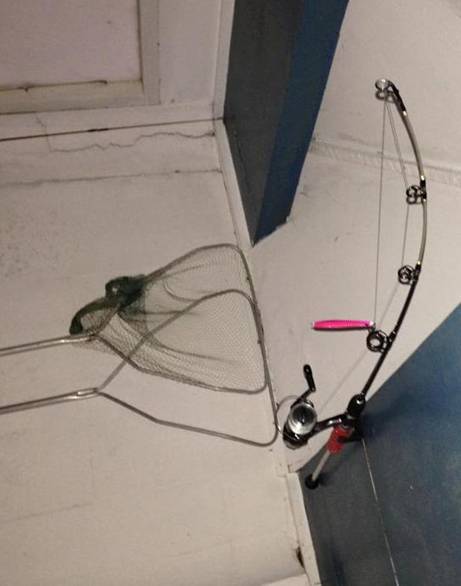 Okay that’s funky. I’ve got a nutty project for summer too Ben, catching a giant slimy mackerel on my Shimano Club Demi. Direct drive baitcaster, about half the size of a business card: 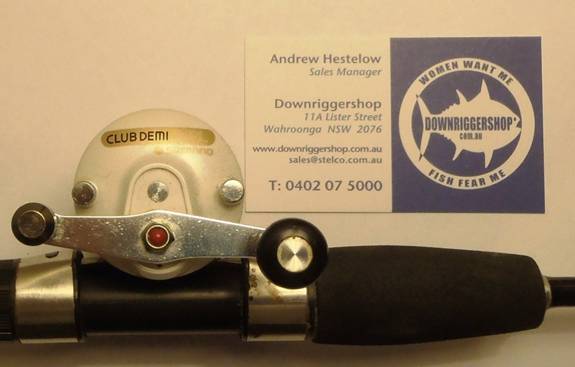 To politics, and the George Cross is awarded for conspicuous bravery in peacetime. Les deserves one for spending all last weekend with a bunch of greenies:

Hi Andrew, following are some snippets of my report on the GNS (Grey Nurse Shark) Symposium.

Would you believe that, after all the prime fishing country they’ve locked us out of, the greenies are STILL blaming us for a ‘high rate’ of shark deaths? 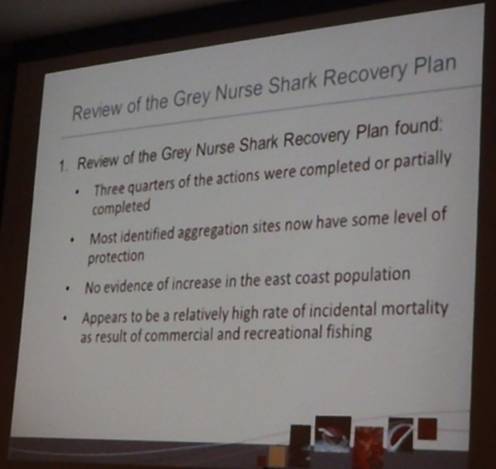 ‘No evidence of increase in the east coast population.’ That’s a blatant lie. As Phil from Angler’s Action Group wrote in May 2010:

Winter surveys by NSW Fisheries in 1999 and 2000 by Otway identified 207 and 292 sharks respectively, and both NSW Fisheries and Environment Australia repeatedly stated there were less that 300 grey nurse sharks left off the east coast of Australia. Otway and Burke’s survey of 2003 and 2004 paper has the estimated population of 460. Carley Bansemer had previously identified 924 individuals and this number has apparently increased to about 1250. … A recent Commonwealth funded population count of the grey nurse shark using the mark/recapture technique of “photographed and fingerprinted” sharks estimates the east coast population to be 1315 individuals, or 1365 when

adjusted for an unmarked population or 2142 when adjusted for possible site fidelity. Though the numbers do indicate protection of the east coast population is still required, it does suggest that previous surveys indicating low numbers and not enough females to continue the species and giving a possible quasi-extinction date of around 2020, appears to be exaggerated. 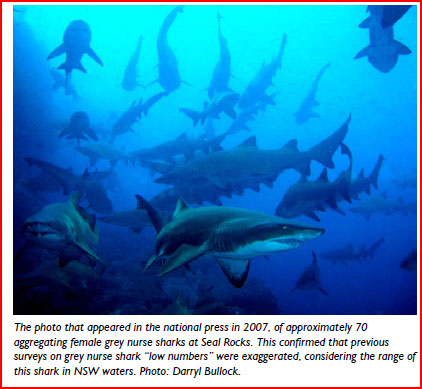 What a con. Seventy sharks at one dive site, yet Otway said there was only 292 on the whole east coast. That’s before we even acknowledge these sharks are in every state of Australia: 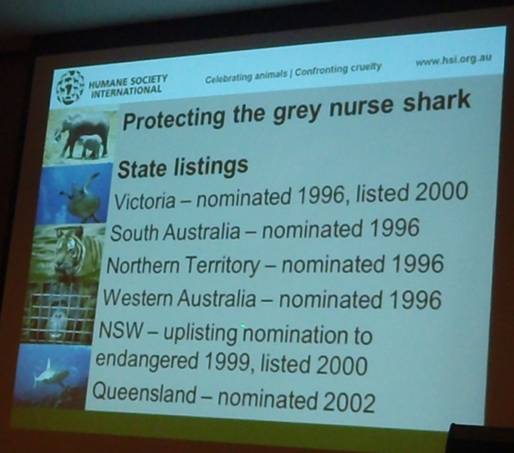 And roam temperate oceans worldwide. So what’s the fuss all about? It’s about profit, and self-interest. For dive operators, grey nurse sharks are a money machine. For greenies, ‘protecting’ the sharks means they can trumpet success to their inner city voter base – most of whom wouldn’t know a grey nurse from a wobbegong. For researchers, hefty grants (hundreds of thousands of dollars, at times) flow to those working to ‘save’ the sharks. Which is why the real disgrace in this giant scam belongs to marine scientists: 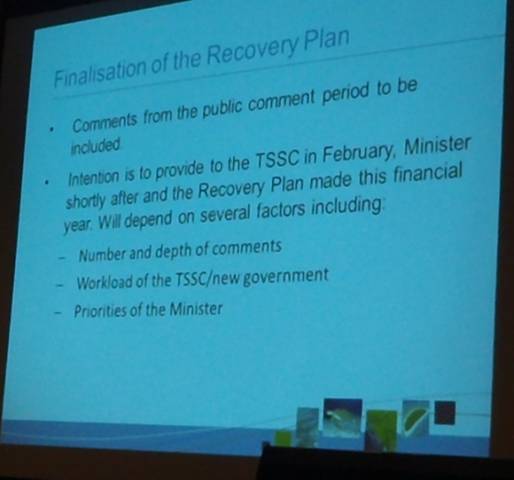 The TSSC mentioned above refers to the NSW Threatened Species Scientific Committee. They are responsible for deciding what species get ‘protected’- grey nurse sharks, Macquarie perch, Murray crayfish and the like. And just like the NSW Fisheries Scientific Committee we looked at last week, the TSSC is stacked with Tim Flannery types. Check this out: 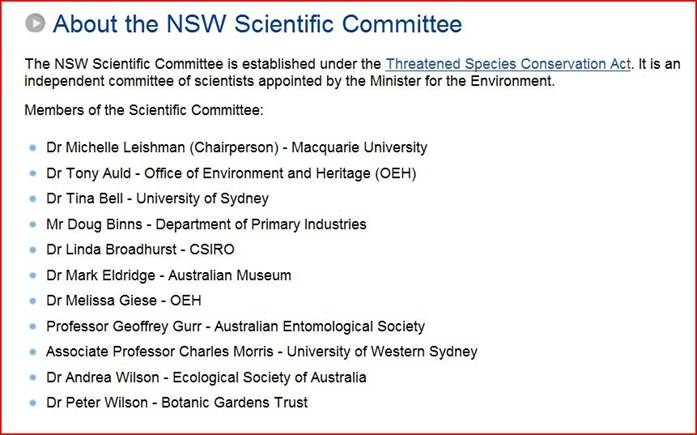 And so on. Why is this of concern? Because just last month Australians voted against the global warming scam, and against the carbon tax. Polling showed both those topics were such a turn off for Aussie voters that Labor didn’t even want them discussed. The only party who campaigned on climate change – the Greens - suffered a 27% negative swing:

Yet NSW Fisheries Minister Bodgy Hodgy uses advice from global warming fearmongers to decide what areas to close to fishing, and which species need to have fishing bans put in place.  She’s turned NSW Fisheries into a sheltered workshop for Tim Flannery types. Is it any wonder she’s made so many mistakes, and alienated the fisho fraternity? No. In closing, I must mention that, in two weeks time (18-20 October) Spiro and I will be at the Adventure 4WD Show at Eastern Creek. Stop by for a catch up, if you’re passing? 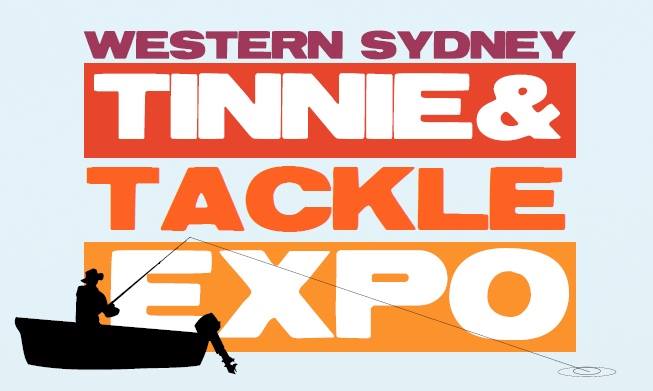 Thanks especially to our contributors, and please keep it coming! So many readers are enjoying the weekly report and it’s all thanks to those who send in their pics. Cheers,