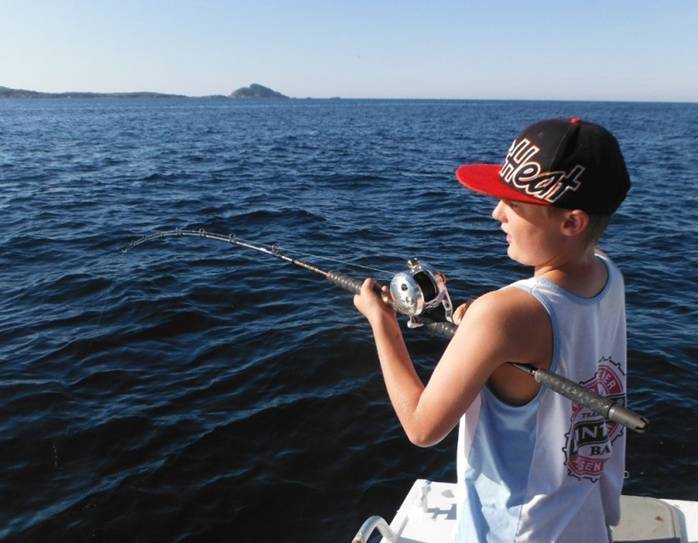 Hi Andrew, thought you may like a couple of photos of the Jig Day in action around Broughton Island over Easter /Anzac week 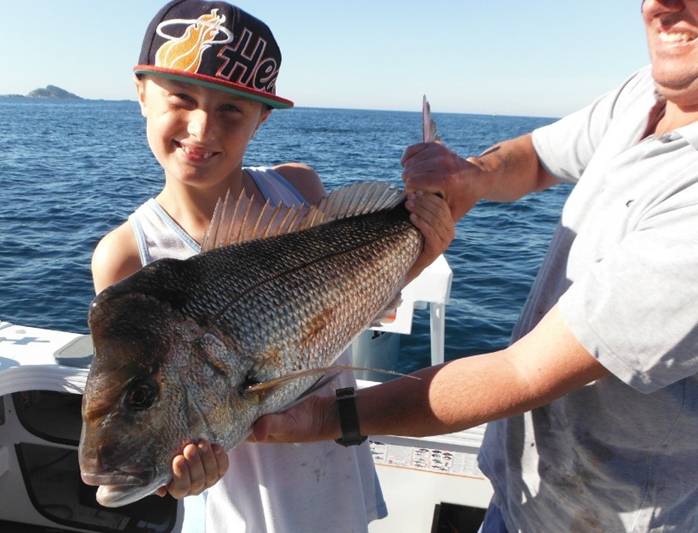 WOW what a nice red. Then it was dad’s turn: 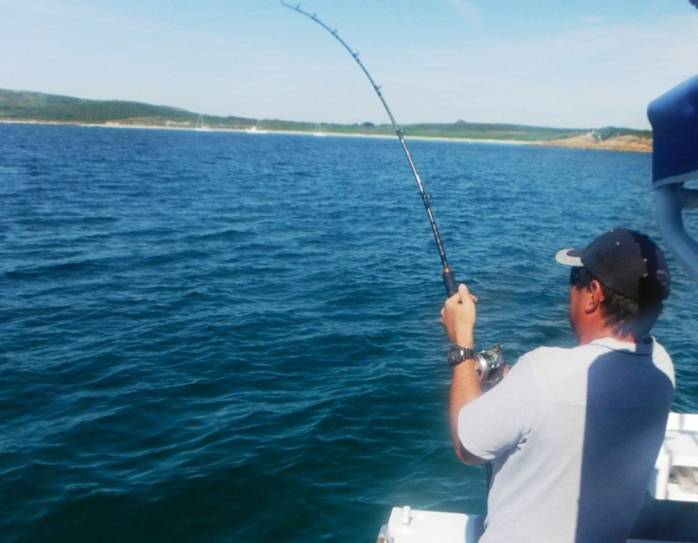 Solid longtail. Anyone who’s boated one of these know how hard they go:

Excellent work Team Mackenzie, and thanks for the pics. This one from Broughton too: 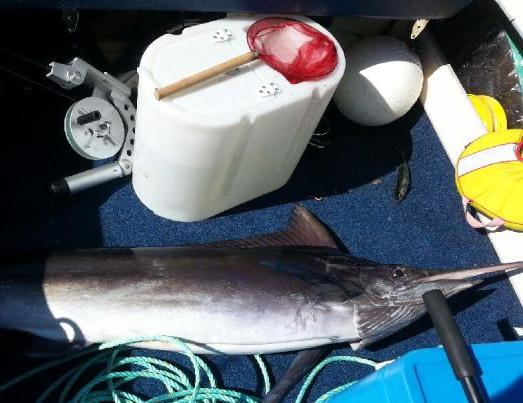 New downrigger landed this after the first 15 min of use off Port Stephens sorry not a good picture, I was on my own

Don’t apologise! What a great result. Dave Maltby up north, on holidays: 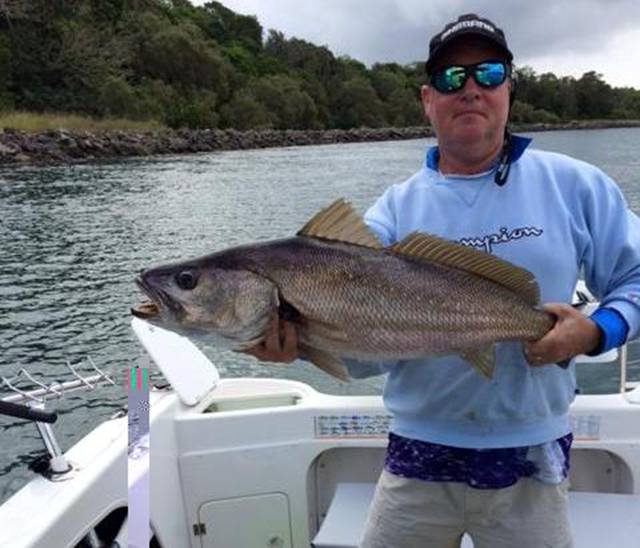 April such a great month for fishing, you don’t even have to leave home. Mark Hiley, a few klicks from where I’m sitting: 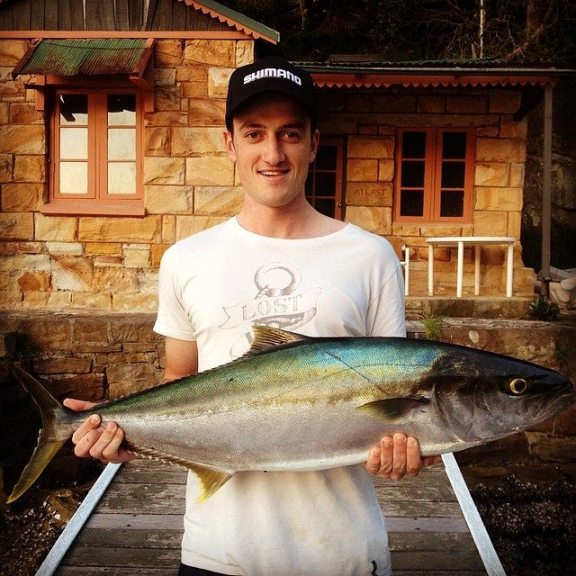 Andy, Sam Higgins tells me you were chatting about Cowan 1m kingys not long ago. They are certainly there! Got this bad boy this arvo, measured exactly 1m. Caught in Cowan on a live yakka. PB by far!! Saw two others the same size following too, also followed poppers and slapstix but no hook up.

What a top fish, especially from those waters. Roland from All at Sea Charters in the Hacking kicks off the Sydney snapper season: 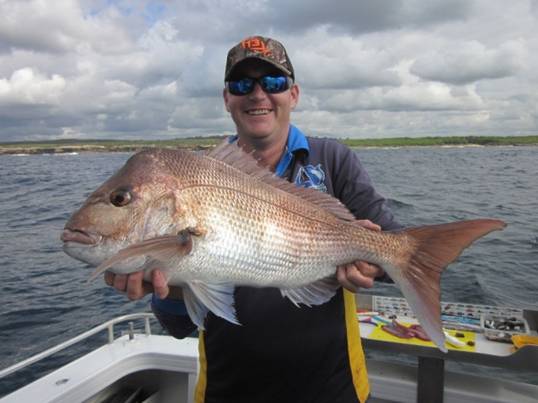 Good morning Andrew, perhaps you and the readers are interested in our catch last Monday. Fish of the day was a 70 cm snapper at about 5.4 kilos. Hooked up less than a nautical mile off the Royal National Park and Port Hacking.

Oh yes we’re very interested, Roland. So interested I spent maybe thirty minutes studying the pic background, trying to figure out where that beautiful red was taken. J Eric Warren sends a report from the old days, gamefishing in the Phillipines from an outrigger canoe. I get such a kick out of reading these classic accounts: 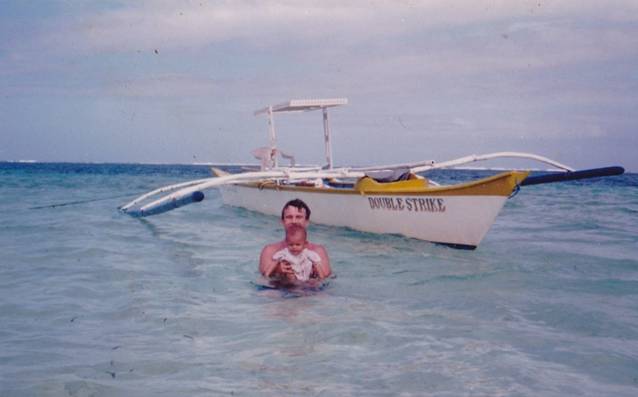 … outrigger boat I had made to my specifications. Not one power tool used to build it . Good memories mate !  Talking downriggers, on really sunny days or heaps of weed I used a handline with a inline chain of lead sinkers appox 3 kg 12 fathoms in front of a rigged flying fish ,worked a treat talking care that we wouldnt catch the downrigger somewhere in the boat from a run and loose the fish. The fighting swivel chair is a plastic kitchen chair with the legs cropped off with a bracket bolted through the engine cowling. Its fully scuppered with a sealed deck 1/2 way from the gunwale to the waterline, lived in it! ; )

Not as happy a boating story below. Thanks Karl Houseman, for being on the spot:

Andy, saw this unfortunate bloke at Brooklyn boat ramp on the weekend. Boat was a Bayliner bow rider. Started and ran it for a bit then it cut out and when he tried to restart got "chk chk boom". Reminder for all boat owners to check fuel lines, breathers, bilge blowers and spark arresters. No one hurt in this one but bloody lucky!

Jason H selling his 6.25m Tournament. This bloke is very particular about his gear and has the best of everything (including a lot of our tackle!) So if you’re in the market I would recommend checking it out: 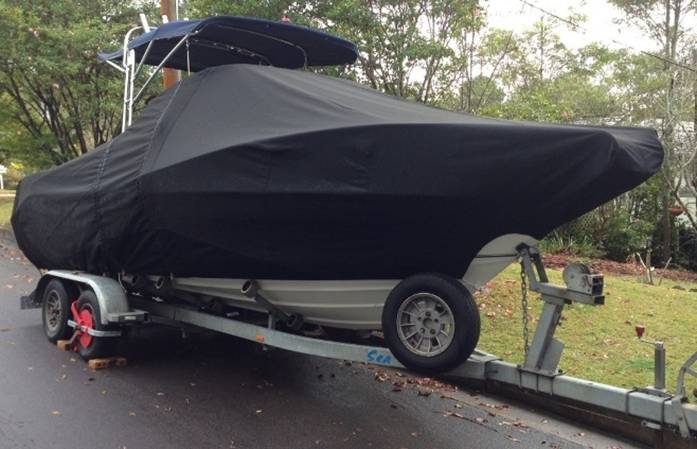 Hey Andy, as you are aware I am in the process of upgrading my boat. Step 1, sell current one. Maybe you can post this up on your Facebook page and see if anyone is interested.

Been a great boat but selling to upgrade Asking $47,500 Boat is in Sydney (Wahroonga)

Good luck Jase. To tackle, and in the USA, the Zuker ZF-14 Black & Purple is the number one skirted trolling lure. Ours are very similar in size and shape but are both rigged ready for use and, cheaper. Each lure is six inches long, with heavy gauge stainless short shank trolling hook. Rigged on two metres of 100-pound mono with armour spring loops, crimped at both ends. Original Zuker lures from Rayanne’s Tackle are $20 each – unrigged, plus delivery. Ours are $40 for 4 *including delivery.* Deadly on bluefin, yellowfin, striped tuna and can be trolled at high speed. Send me an email for a Paypal request, or more details? 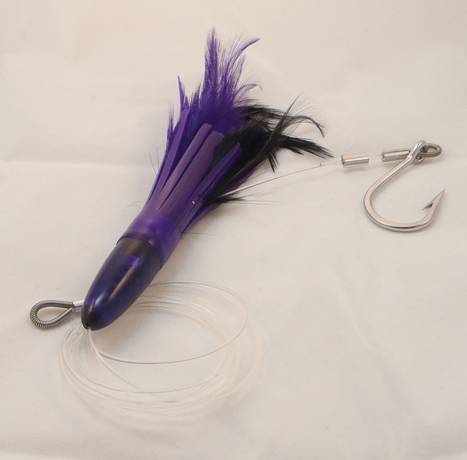 Steve Sims from WA has featured in our reports several times recently. He bought two of our big E80W electric reels and has been giving them a massive workout on 25 kilo blue-eye and 60 kilo hapuka recently, all of which have featured in the weekly report. 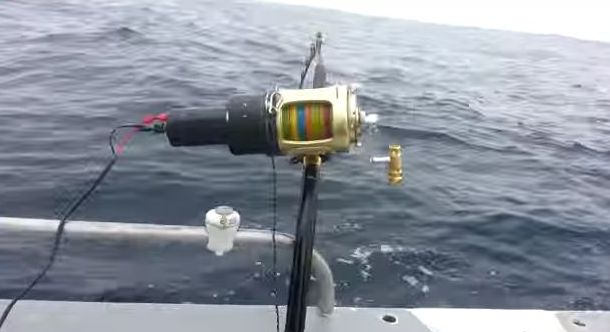 He called me Monday on the way back from the boat ramp to say they had a special day. A swordfish speared a hooked blue-eye through the gills not far under the boat and then charged off back into the depths. Smoke was literally pouring off the reel (which concerned me warranty wise!) but eventually the fish disengaged. This is the bloke who sent me the Hondex sounder pic, showing swarms of blue-eye at 417 metres: 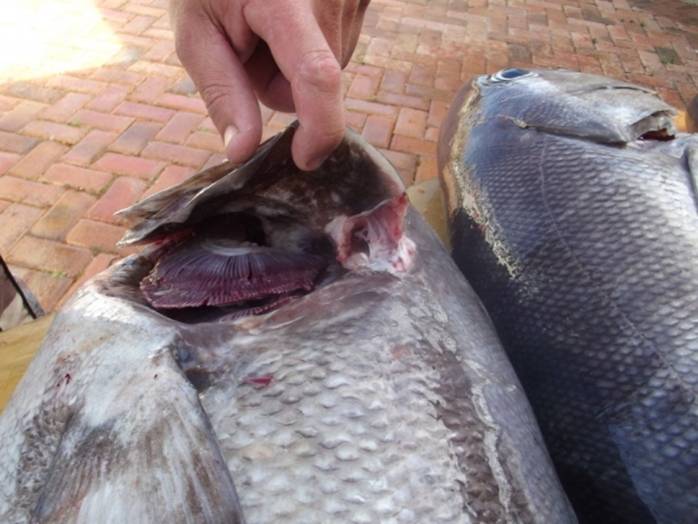 Andrew this is the damage of a swordfish attack on a trevalla at about the 50m mark. It started its attack at about 80m mark. At 40m we hooked up and I’m pleased that with all the smoke coming from burning oil on the drag of the E80W the reel didn't miss a beat. Unfortunately after an hour and quarter into the fight it tail wrapped us and we parted company. As for the trevalla it was floating alongside the boat about 5m away. Here is the damage inflicted. 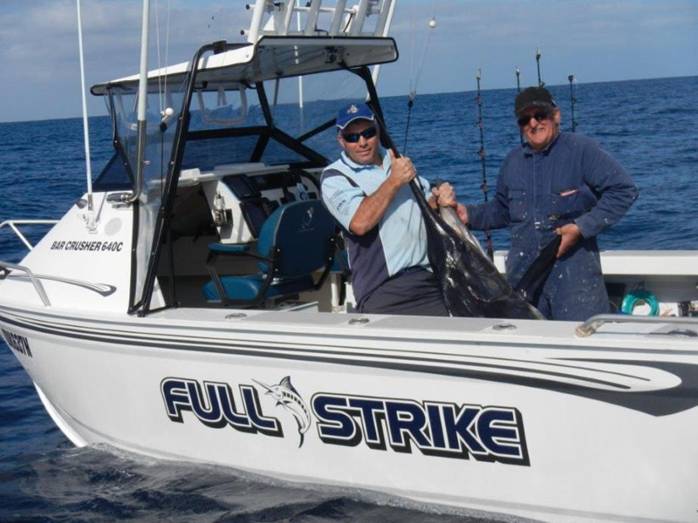 Hi Andrew, fished Bermy during Easter, bottom fishing was hard going with leather jackets everywhere we went. The game fishing was good though with water temps around 24.  We had 4 marlin raised in the five days game fishing and my mate Bill landed this 100 kg + stripe marlin on Anzac Day.

Some nice feedback on our power reel knobs this week. Duncan from D & H Reel Repairs pleased with those fitted to his clients’ ABU baitcasters. They look good, don’t they?

Matt Summerhayes pleased with his upgrade too. It’s sort of hard to describe why a ball knob feels so much better, on a spin or jig reel. But it *just does*. 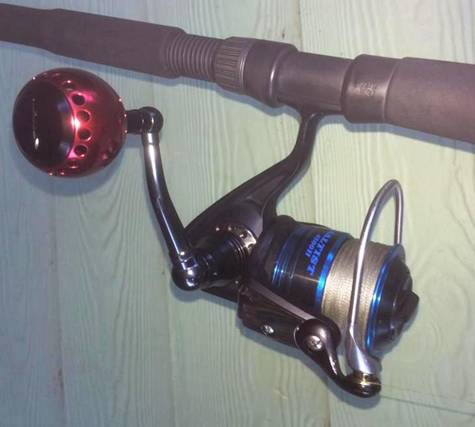 Reel knob looks and feels great on the Saltist 4500T and took 1 minute to fit. Thanks again Andy

Mark Way from Kiama GFC sends news from down south too: 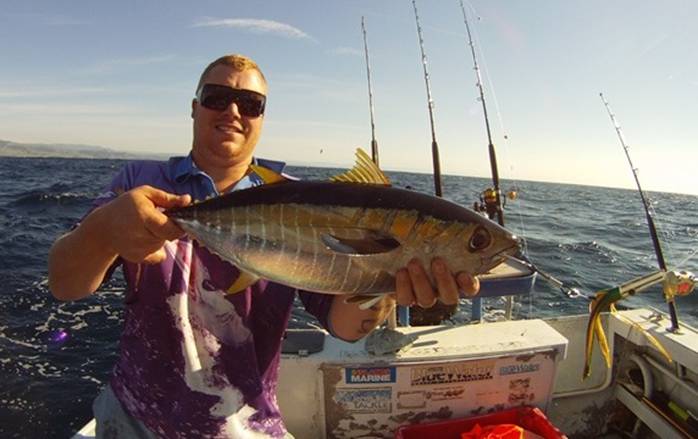 Greg Barea on El Bandito fished on Anzac day with two skippies on Board, "Tim Monck and Matt Nofferi "and found 23.4 degree water on the shelf. The Jelly Bean Fin are still in 55-60fa area and they caught a few with some lost Striped marlin out on Shelf.  Snoop n Round had a 3:3:1 Striped Marlin. 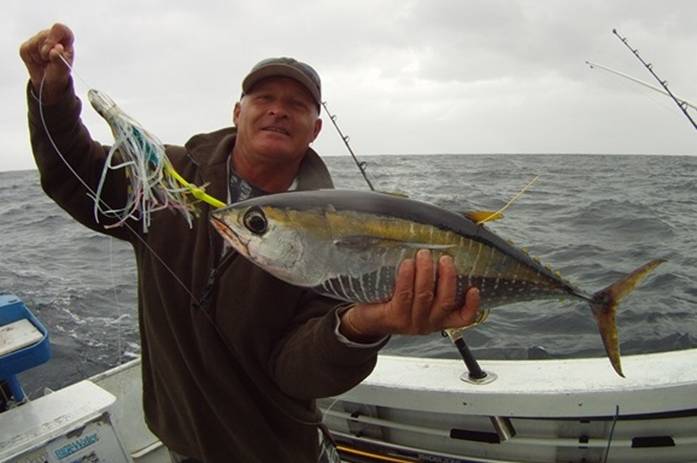 So you’ve been holidaying on King Island for a week – and haven’t caught a scale. You head down to the beach with your whiting rod on the last morning of your stay – saying a little prayer, that you’ll find something this time: 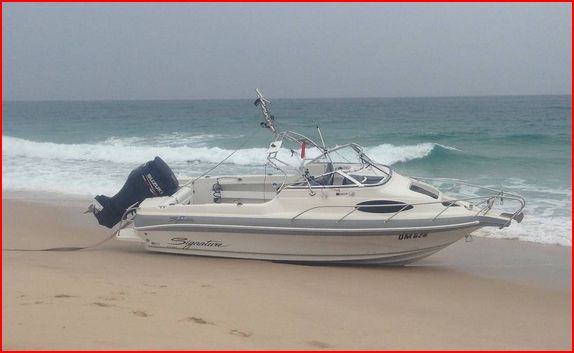 ‘The bigger one was lost.’  Blimey, talk about twisting the knife: 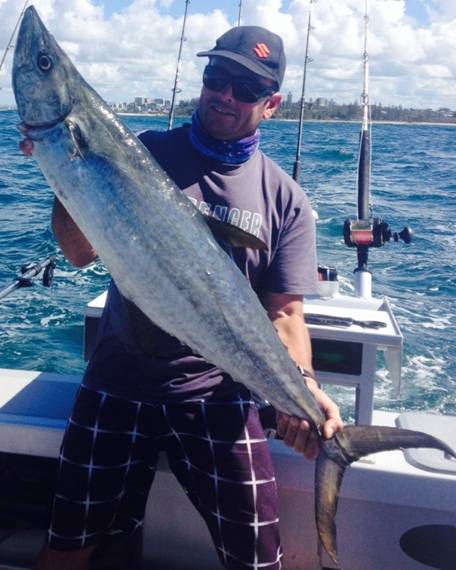 Thanks Andrew, the fishing report is great, attached a pic from this weekend off Caloundra-Sunshine Coast which led to a bigger one which was lost, hence leading to me having to buy the replacement drag washers off you for my Stella!!! Thanks James

To politics, and last week we covered the greenie push to lock up Long Reef (in Sydney’s north) to fishing. They claimed it needed ‘protection’ like Shelly Beach at Manly, just a few kilometres south. Only problem was, Shelly Beach has just been declared the State’s dirtiest beach by the CSIRO. Finding a spot to sunbake is difficult, thanks to the Greens ‘lock it up and leave it’ mentality : 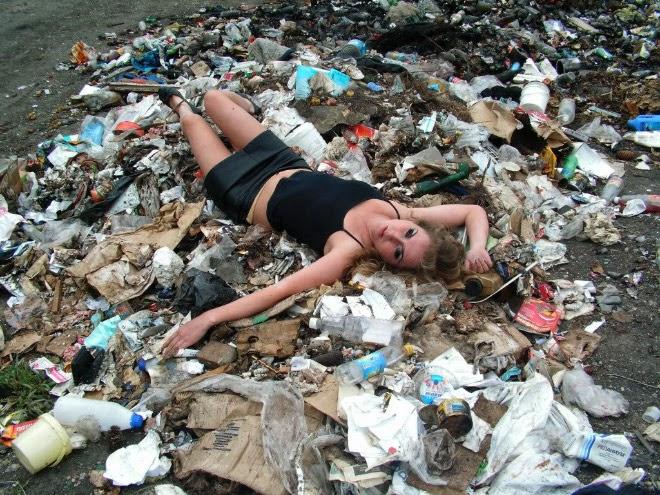 Tony Flook, the greenie behind the campaign, is someone I have enormous sympathy for. Going through life with a name like Flook would not be an easy cross to bear. But since environmental decisions need to be based on peer-reviewed science (LOL) let’s take a look at his credentials. John Harding is the man who took Flook’s ‘Crouching Diver – Hidden Abalone’ credibility pic: 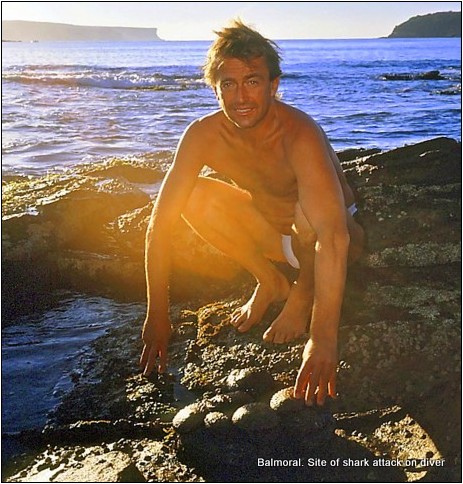 John wrote to me:

Tony has never caught an abalone in his life - too hopeless.  I brought those in the picture around for him and we let them go in Sydney Harbour - near where he used to swim with mask and snorkel each morning, to see if they would grow in number. The text was a bit of glorification.  I've since changed it on my blog to the true version.

Grateful, John. What I would say to greenies like Flook is, clean up the mess you’ve already made before making a new one. But really, it’s not about the environmental benefit at all. It’s the same old thing we’ve seen for years. Selfish yuppies trying to big note themselves with a display of fake concern. And that’s breaking out everywhere. Bayview boat ramp is on the Parramatta River, west of Sydney Harbour Bridge. Administered by Canada Bay Council, who received $2.3m for upgrading the three boat ramps in their Shire – on the proviso that no access would be restricted. Having received all that money, Council now wants to close the boat ramp at nights: 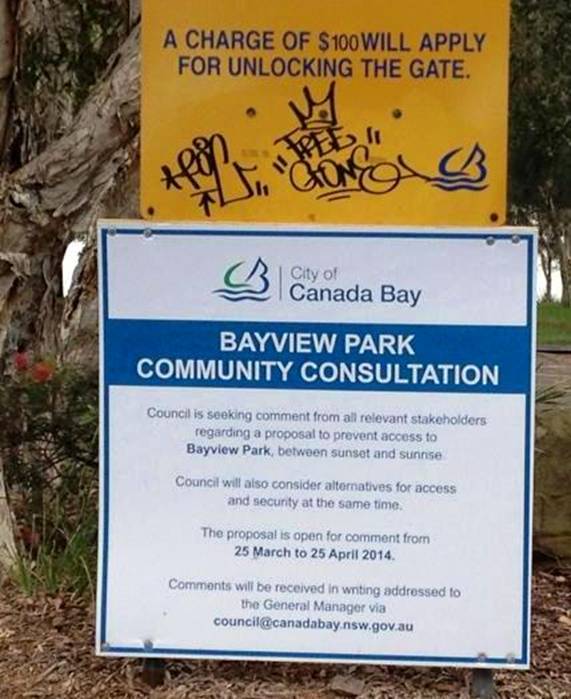 Not boaties causing a problem, but because hoons use the place. And just like Flook, some yuppie busybody is driving the campaign: 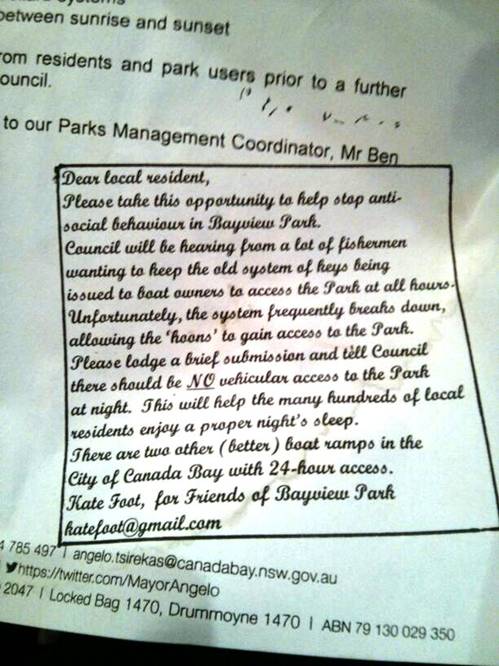 The question is, will Duncan ‘double demerits’ Gay, the NSW Maritime Minister, enforce his own guidelines? My bet is, no, going on his track record of unbroken failure over the last three years. Readers will know of my concern about the hundreds if not thousands of floating hulks and mooring minders in NSW bays and estuaries: 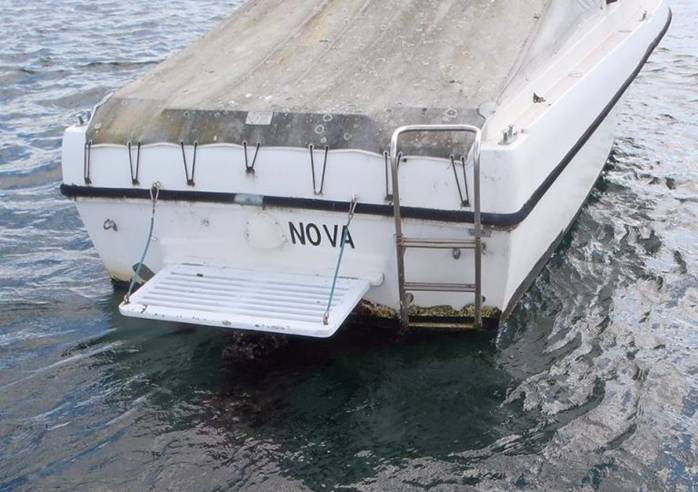 My parents bought a house in Beauty Point 20 years ago and they were offered a boat and mooring out front. Only problems was the boat and mooring would stay in his name. The boat was not even functional. What a rort.

The regulations as regards moored boats are actually very strict:

So many readers on our Facebook page wondering why they’re not enforced. Maritime patrol boats drive past these hulks every day and turn a blind eye. Meantime our clients are being fined for not wearing a life jacket – when they’re fishing in two feet of water:

Now why would that happen? I’m not one for conspiracy theories, but this State has been rocked by corruption findings over the last month. Three Ministers have stepped down, including the Premier. So when news of a $80 million boat storage was announced this week, some connections were made: 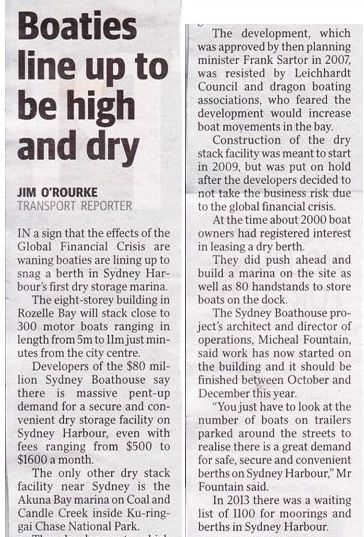 Especially since I’m told by an insider that the boat storage was originally planned for Homebush, way closer to the western suburbs, and accessible by the long suffering boat owners who live out that way and have to pay maybe $15 each way in tolls just to get to a boat ramp. But then when the Coalition government got in, the proposed site moved from Homebush, to trendy Rozelle. There’s not a lot of Grange at Homebush. And in case anyone thinks I’m drawing a long bow, check this out. From Hansard, the Parliamentary record of debate, yesterday Tuesday 6th May. Not only are our fishing taxes being wasted left, right, and centre, a hefty chunk of them have been misappropriated for other purposes:

We’ll keep on this story but if anyone has any intel to share on mooring rorts or Maritime shenanigans, please let me know? All confidences will be respected. Thanks to our readers and double special thanks to all those generous enough to share their adventures with us. Until next week,