Every so often the planets align and suddenly, overnight, the fishing goes crazy. That’s what’s happened in Sydney, this week. The gemfish spawning run hit overdrive attracting mako sharks in the hundreds at Browns, while just east bluefin and albacore are swarming. Eddie Aspden: 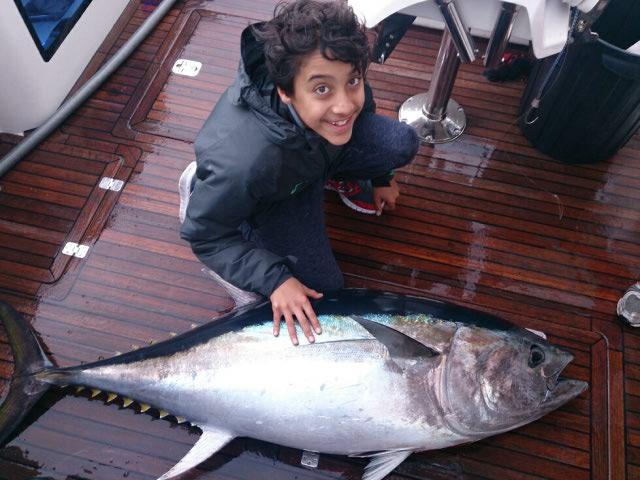 HI Andy, quick report before bed. We went well wide of Browns today and hooked up around 12:30pm 10 mile east of browns to a school of bluefin on five lines though only 2 fish were landed. This one was 65kg caught by Jerome 11yo.

The other fish was around 40kg: 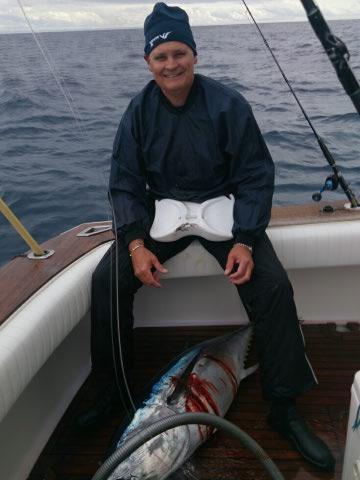 15 Albacore as well over the morning to about 8kg. Strangest part of the day was running into a school of ravenous micro kingfish that mauled all our lures in 1800 meters of water! Must have been on their way somewhere: 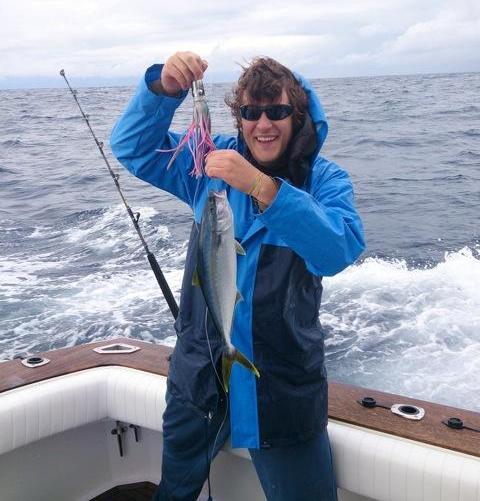 So good, Eddie! Really grateful that you sent such a top report after a big day on Big Blue. Kurt from Marquis out there too: 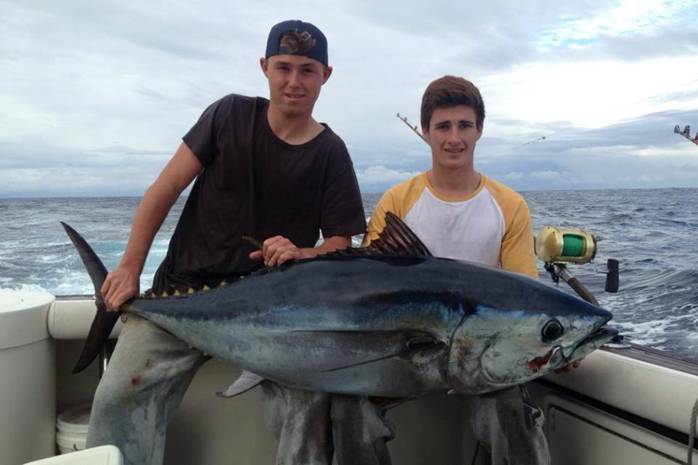 Great stuff! By crikey this is exciting. We were out wide on Wednesday too, but no big tuna gear on board. Our primary plan was to fish the bottom at Browns Mountain. That worked well: 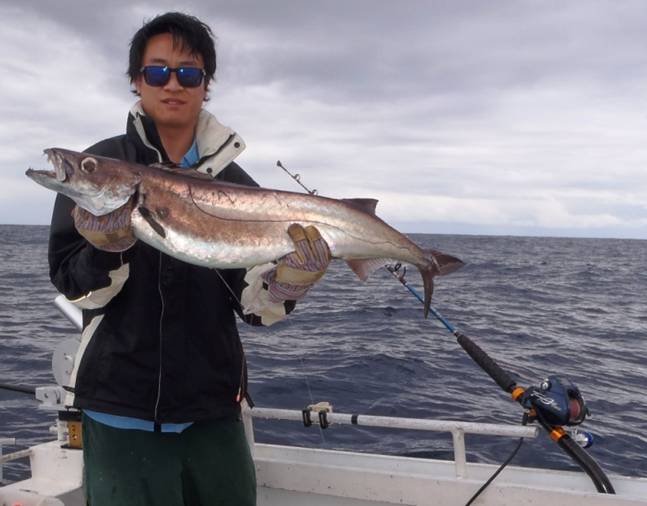 Jay brought up this big frost fish. I usually put those back over the side, but Jay – whose family are expert cooks - tell me they taste really good, if prepared properly: 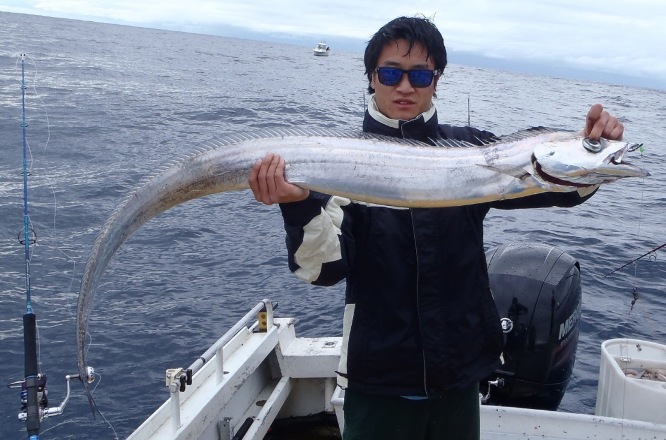 We were using the Daiwa Tanacom bull 750 on our housebrand bent butt rod, and it worked a treat. Check this out, 40 seconds of bringing up gemfish up from 400 metres down:

Fishing nearby was client and friend Chris Adams on his big Trailcraft. He uses our electric 80 Wide reel to deadly effect: 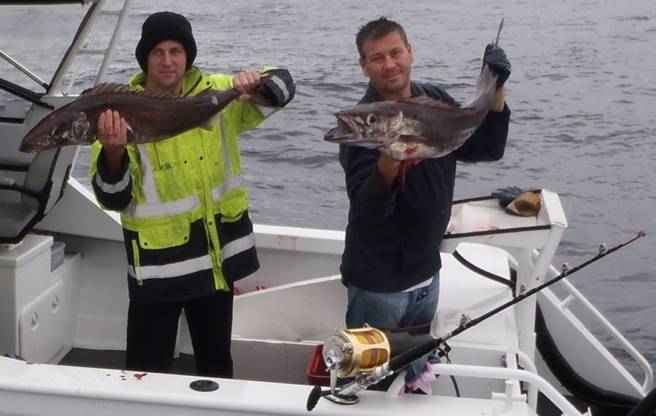 This reel is so powerful it was able to pull a large hooked mako up to the back of the boat, where the shark went completely crazy. Check this video out, some pretty wild action:

A couple of boats over, and Blue Illusion had a nice mako tied off to the starboard rail: 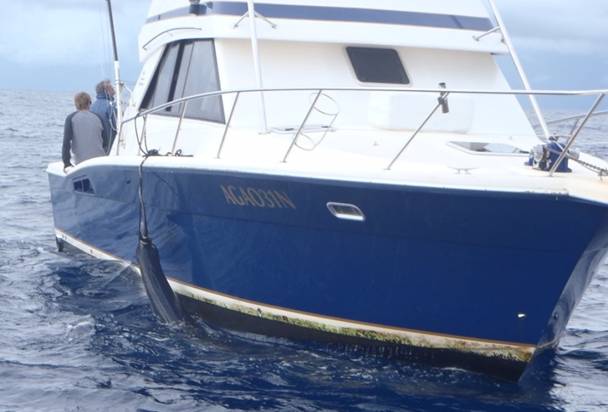 The VHF on Wednesday was alive with chatter from excited fishos hooking up on bluefin, albacore, and even yellowfin. Do anything you can to get out there! When the fishing is this hot you have to drop everything, and go. Note that you may have to range wide: 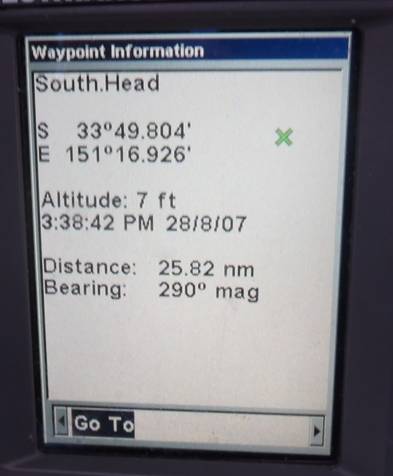 Whether they are still relevant is anyone's guess, but they can't hurt as a starting point. J Good luck if you're going, and get me a pic or two? Sydney Heads a welcome sight for our crew, after a big day out wide: 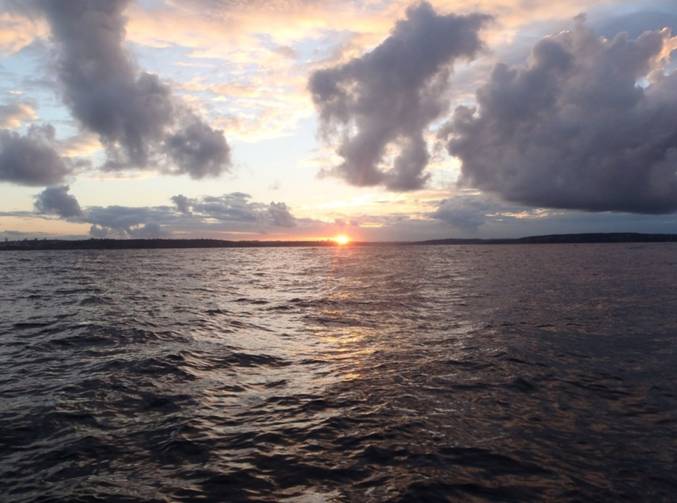 With so many blokes fishing really deep water now, it’s been fascinating to see pics of fish we’ve never even heard of, coming through quite regularly. How’s this, from Richardson Marine? Matt Hunt fishing off Portland on Tuesday scores two Knife Jaws: 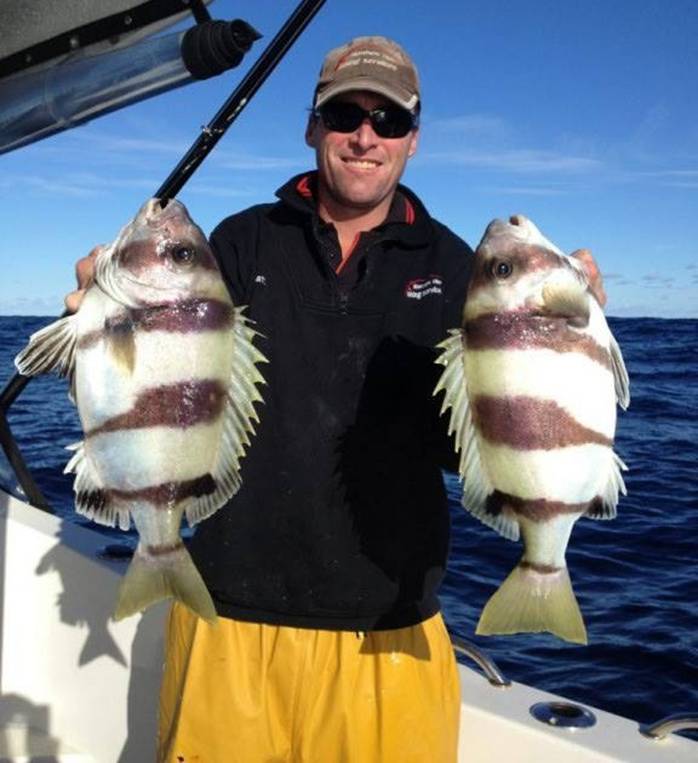 Trevor Jane catches some beautiful bar cod off Brisbane, and something unusual too: 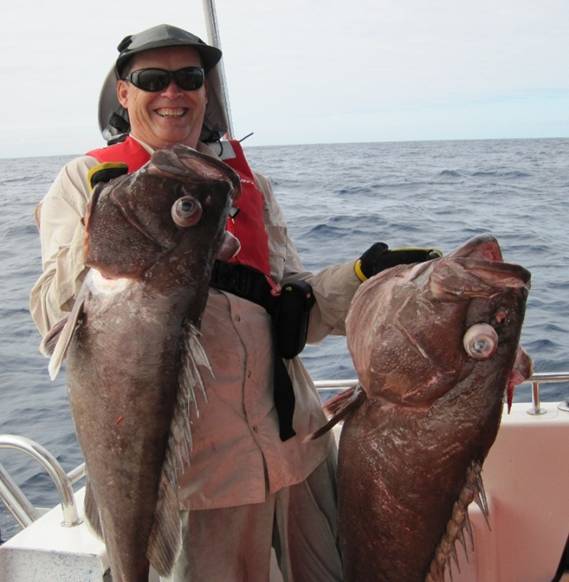 got this little thing - teeth like piranha - bit through 60lb Jinkai easy - what is it? Tasted good.

Don’t know, amigo! But for sure one of our readers will enlighten us. And while we’re playing Guess This Fish, Wade Harper caught another deepwater weirdo at Browns on Sunday. I’ve never seen anything that even looks like this one:

Went out yesterday arvo for a quick drop of Browns, and try out the new combo. 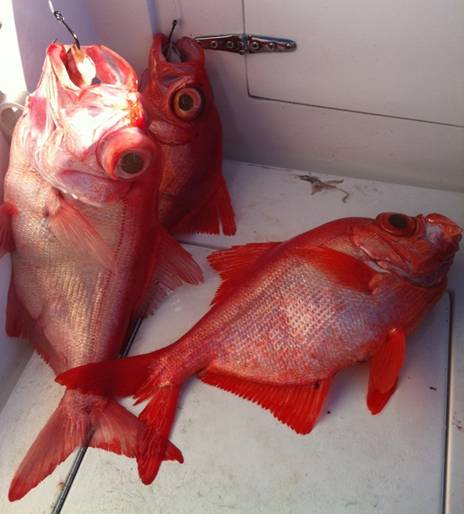 Not sure of what fish is in the first pic (any idea?), But the 3 way on the Alfonsinos looked pretty good.. Great combo. Worked a treat. Thanks for your help.

Julian Pepperell checked in on our Facebook page to inform the 800 fishos pondering the species that it’s a banded cucumber fish. Adam Cree from Blue Reef Charters has been making the most of the gemfish run off Sydney: 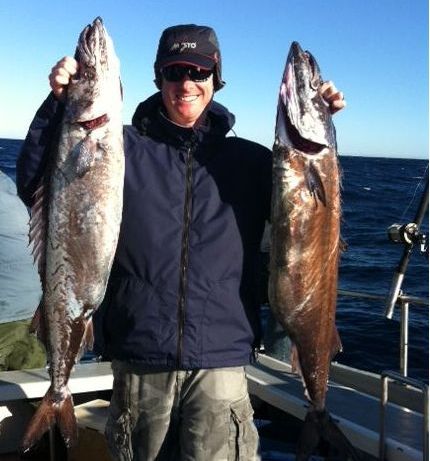 Good timing! Editor Ben Knaggs reminds me that the latest Fish NSW magazine is out, and yours truly has a story in there about fishing deep at Browns Mountain. Don’t miss that one, whatever you do J 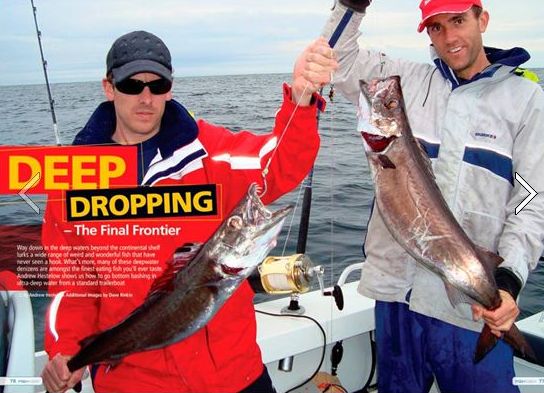 Deep drop fishing is on fire! Top catches of big gemfish and blue-eye have been coming from the deep waters right along the coast recently. Find out how to get your share of these fantastic deep water tablefish in issue 2 of Fish NSW, where expert deep drop fisho, Andrew Hestelow hands out the need-to-know info on bottom bashing in ultra-deep water from a small trailerboat. Grab your copy now in newsagents or via www.fishnsw.com.au.

Ian has some good questions, before deciding which electric reel to purchase:

         Is the braid the multi coloured type or can this be supplied as an option? 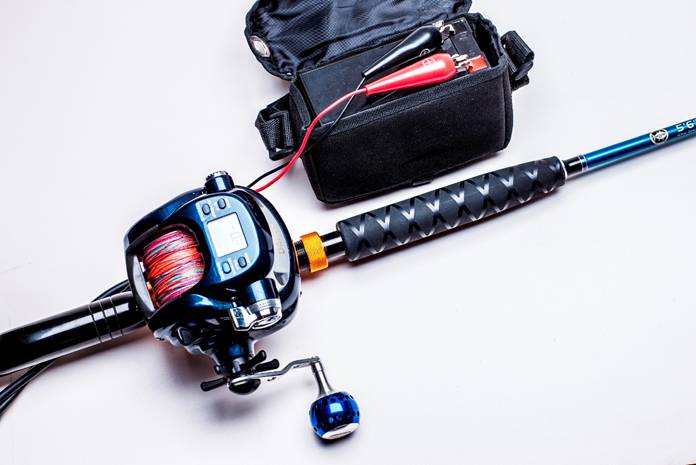 The Daiwa TB750, shown above, spooled with 700m 50-pound cc braid and mounted on our bent butt rod. Price, $1050. All electric combos supplied with weight and rigs too. All you need is the bait. J We used the 750 last Monday and it ran all day on a battery we sell - a 12V 7 Amp hour supplied in a very convenient canvas pack, with strap and 12 and 240V charger. 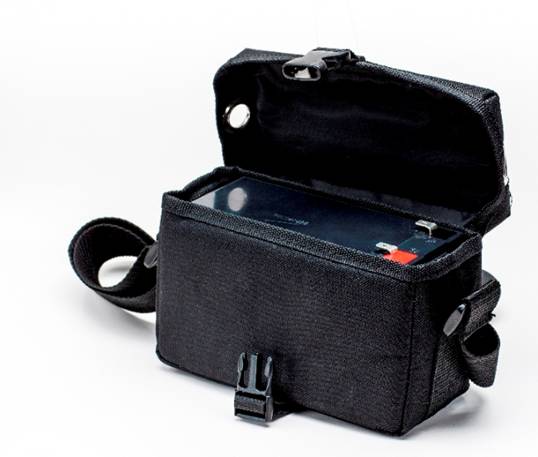 I would recommend using this one, it’s worked so well for us. If you are worried about draining the battery late in the day, just switch the alligator clips to the boat battery. $39 and it’s supplied with 12V and 240V chargers. Actually it’s really good for anything that runs on 12 volts: 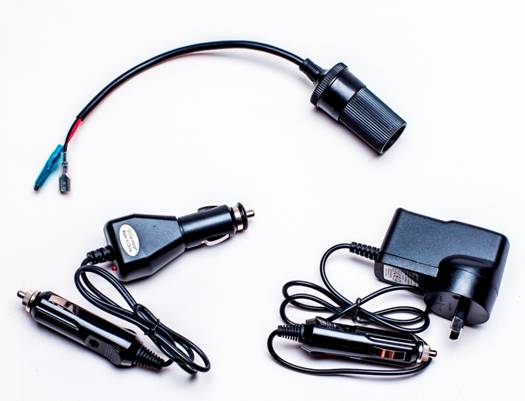 Warranty is twelve months on parts and labour, excepting commercial use. We only supply colour change braid now, simply because it’s so helpful - especially for this type of fishing. The Tanacoms have an auto shut off when retrieval reaches 5 metres of line and they also have a built in jigging program. Great bit of gear and the 750 can be used as a regular reel, too.  Kevin is waiting on an electric reel for his new boat, and sent me a pic of his new pride and joy. Wow, and I do mean wow:

Danielle writes, after seeing the pic on the Facebook page:

Dimitri’s sent in some killer reports over the years, it’s great to hear from him again:

Hey mate just thought I’d let u know, headed out to 90m of water east of the Gold Coast, jigged on sunrise, then trolled heavy tackle on the Shelf then came back to jig the same spot in the arvo. Ended up with 7 kings around 5-10kg, and one sambo. 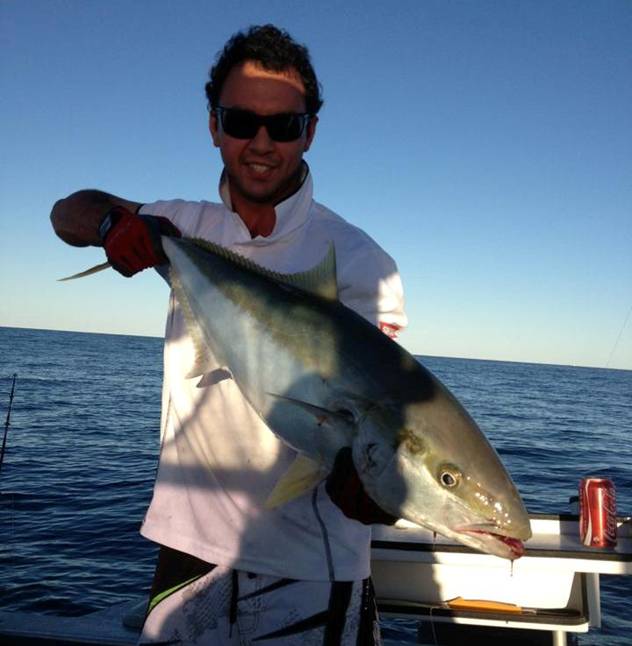 This fish I caught was the biggest of the day on your purple jig which also got a few bonito and a king the same size as the jig. The bonito really do like this jig 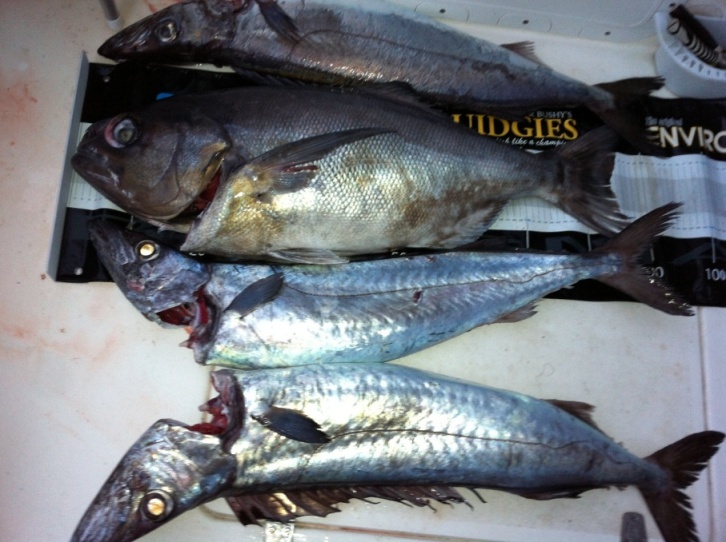 Robert from isourceboats.com.au was in the right place at the right time: 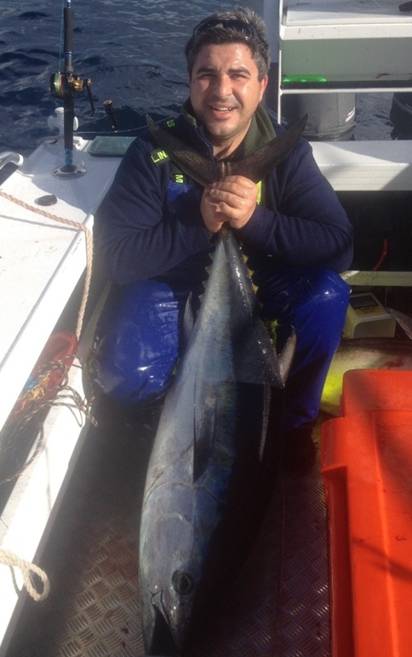 Caught this beauty in Ulladulla closer to new Zealand btw on the 1st July, my first. We had a five way hookup, screaming Tiagras, and landed 3 on Isource.

That would have been SO GOOD. A bit further north and Mark Way says the bluefin are on, off Kiama: 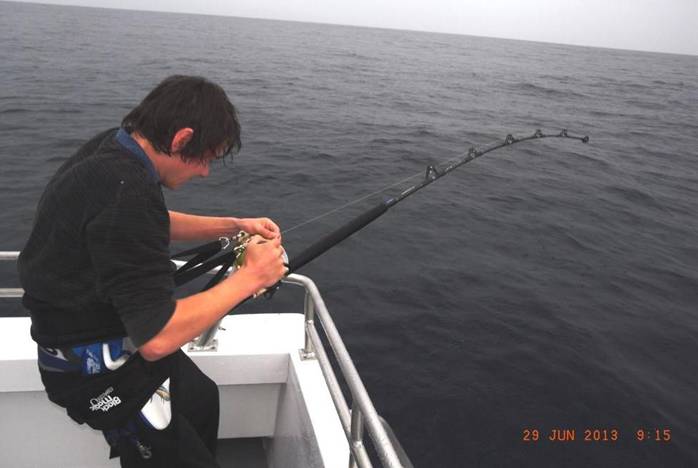 Bluefin are here but out very wide in 2500fa! 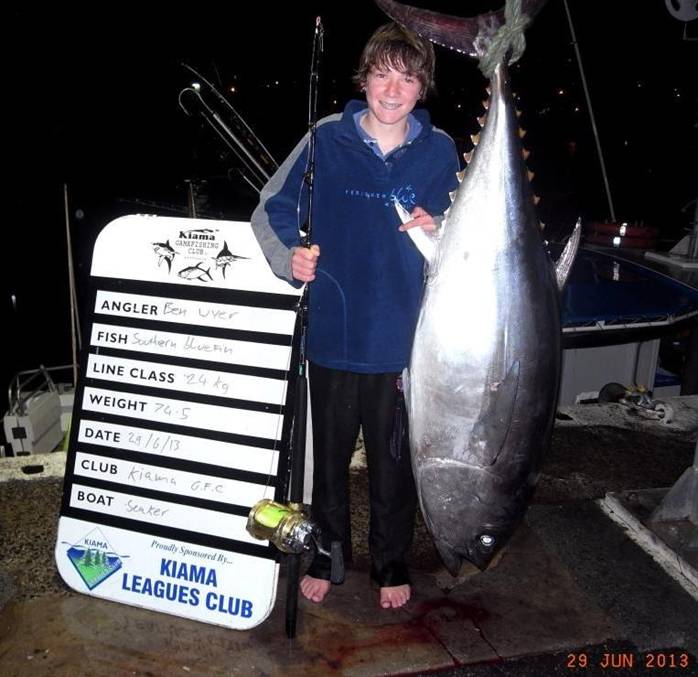 Young Gun" Ben Wyer recently caught a 74.5kg Bluefin Tuna on 24kg to set another Club Record. Ben will be heading down to Southern Zone Presso/AGM on Saturday with me to pick up a Junior Zone award, Well done Ben!

Too right, that’s a huge accomplishment. Heading down to give a talk at Vikings Fishing Club in the ACT early next month. Vic from the club ran up this flyer, to advertise the event. All welcome, it starts at 7.30pm, downstairs in the Sportsman’s bar, at the Vikings Erindale Club: 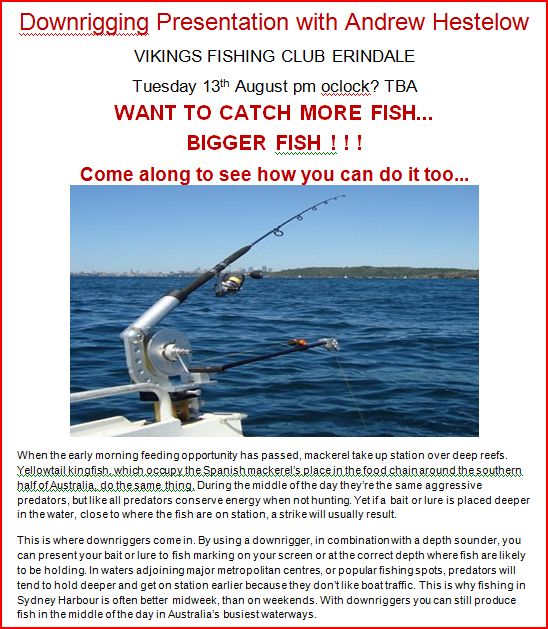 To politics, and Angela from Tweed Anglers sends coverage of the Coffs protest. Thanks, Ange:

Feedback from the meeting still coming in with all who attended very upbeat, about how things went.

All kinds of background intel and rumour floating around as to why the bag limit reduction even saw the light of day. An interesting response last week from a well connected chap who told me the reason is simple. To understand what happened, I should mention that Australia Post has a gigantic mail sorting facility at Artarmon, on Sydney’s north side. When the use of email really started to explode and invoices were being sent as a PDF (rather than hard copy) the volume of mail at the sorting facility dropped dramatically. So much so that sorting staff were really worried, as to how long they would keep their jobs. So they started putting the same batch of mail through the sorting machines again and again, maybe four or five times in a night. I know this because a friend worked there. In the same way, Fisheries staff were worried when Hodgkinson’s first initiative as Minister was to shut down the Cronulla office. They all started bustling around with make work schemes, worried that with the media full of talk about cutting the public service their jobs could be on the line, if they weren’t looking busy. According to my contact the real motivation behind the bag limits review is just a make work project with submissions, meetings, consultation and the like all intended to make those involved give the impression of activity. This is just wacky enough to be true. And it fits what we know for sure, that Bodgy Hodgy has no real engagement with her Fisheries portfolio – and no real interest in it, either. Katrina Hodgkinson is a Rob Oakeshott, making promises she has no intention of keeping.

The other interesting intel received this week is that Bryan Van Der Walt, NSW Rec Fishing Programs Manager, is driving this craziness and has ACORF Chairman For Life Bruce Schumacher under total control: 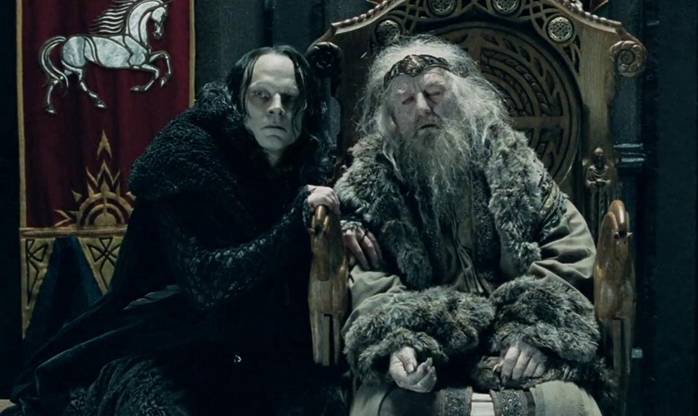 An opinion piece on the excellent Richardson Marine website nails it:

I encourage every angler regardless of where you live to make a submission to this NSW recreational fishing regulations review, with a very clear and simple response, “we will not accept any changes to our regulations that are not based on good science.” No need to say anything more. They can take their social concern and shove it, as far as I am concerned.

This submission is due before the 31st July.

We need to turn this tide, today far too much money is being spent trying to justify locking anglers out, and far too little on addressing the real issues, we as angler need to unite and become proactive instead of constantly being reactive. We need to show these so called environmental groups how to do real conservation, not this cr@pp they are doing.

We need to unite and join forces with all affected stake holders including the commercial fishing industry, Today it’s not just the general community that has been brain washed by this green filth but anglers are starting to believe the  propaganda as well. …..Anglers need to be educated on what the real threats to our marine environment and our species are, we need to put an end to this anti-fishing propaganda, and start making positive changes.

Exactly. Don’t think this will be the end of it, other Green-influenced Fisheries departments are just as keen to bump up the red tape and are watching developments in NSW closely. Chris Wallace writes from EcoFishers at South West Rocks:

Good on you Chris! The submission form is attached and please remember – you don’t have to be from NSW to complete it. Please – help us out. We’ll do the same for you, one day. Print, complete and mail. In the long run it may be more helpful to your fishing future than your tackle or boat. Until next week and as I always say – and mean most sincerely – thanks to our readers and especially, our contributors. Without your generosity we’d have nothing. Tight lines,