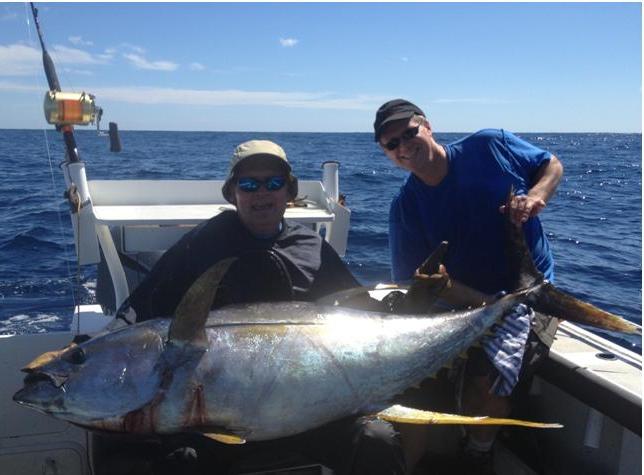 That’s just incredible, and thanks so much Pete for sending this (almost) live pic. I was having a boat maintenance afternoon and (of course!) listening to VHF 21. Radio chatter SO EXCITING. Pete Hodgkins, on Sunday night: 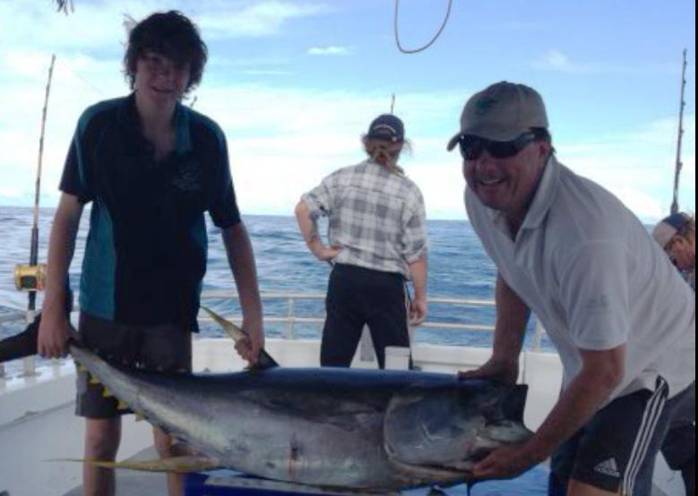 Hey mate weighed this fin for Ben Wyer 2 night 56.5kg on 24 his first fin, this kids going off with his captures and already has two club records. They had fish jumping round the boat while he was hooked up! Plenty of action wide off Kiama.

Looks like it! Grateful for your email, Pete. Rod Findlay got us all fired up on Facebook with this one: 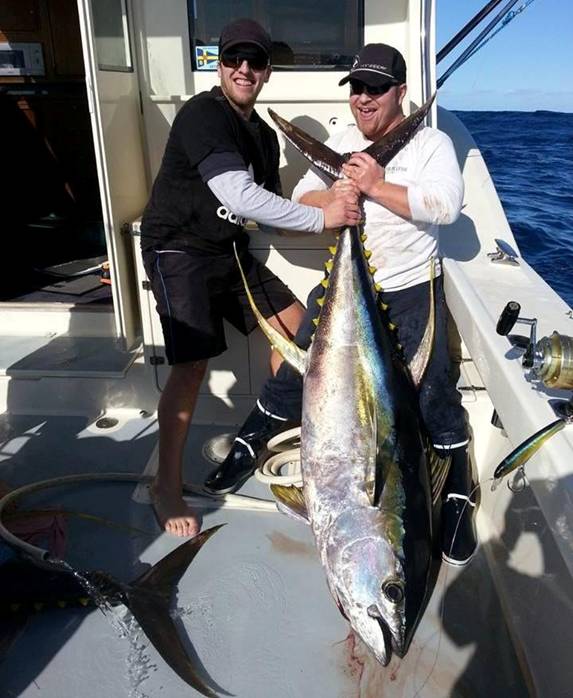 GOLD. Look at the size of that tail on the deck! Jared Banek fished north, and proved the big fish are spread right along the coast: 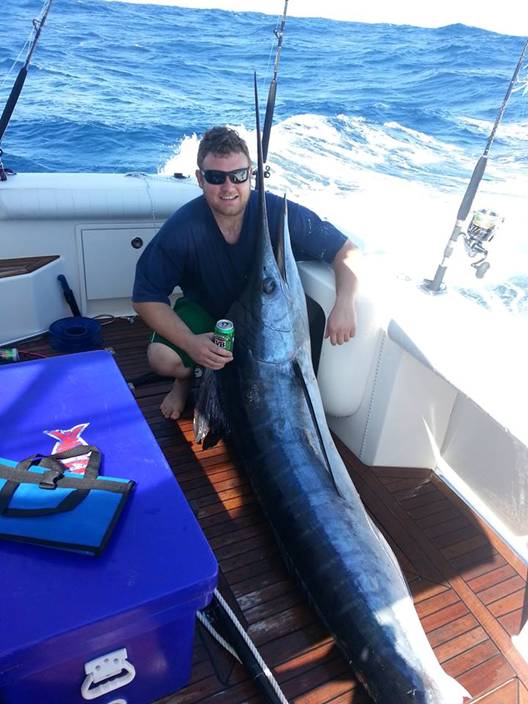 ‘Marlin… gem fish … kings.’ What else does a man need, to keep him happy? Well maybe one of those cold VBs Jared’s celebrating with. Definitely need some Allmark kingfish pics, champ. Talking of marlin, here’s one pulling a bloke over the side of a trailerboat in Fiji.

Spectacular and, no one hurt so, pretty funny too:

Across the country, and Dean has been fishing wide off Jurien Bay in WA. He’s been getting some big fish but reckons it’s time to go the 80 Wide electric reel route. Grateful for the pics showing what he’s been up to: 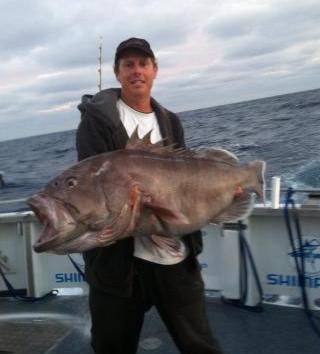 I have attached the payment receipt as well as some photos for you of our recent fish caught on your hooks. 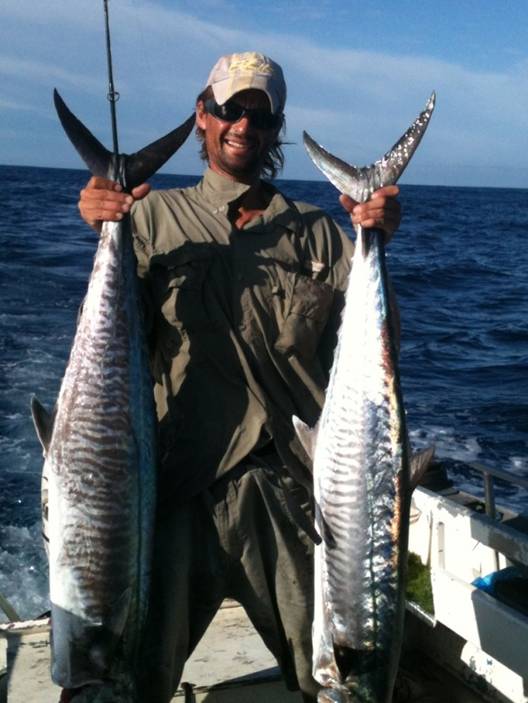 Please note the 190 kg marlin was only taken due to it expiring during the fight. 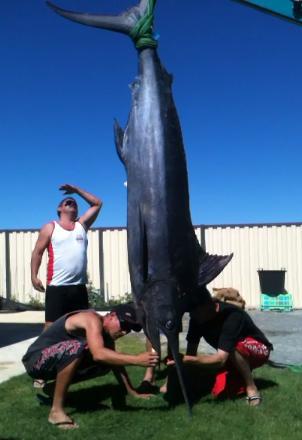 I will be making another order for some more of your new down deep hooks when they arrive. 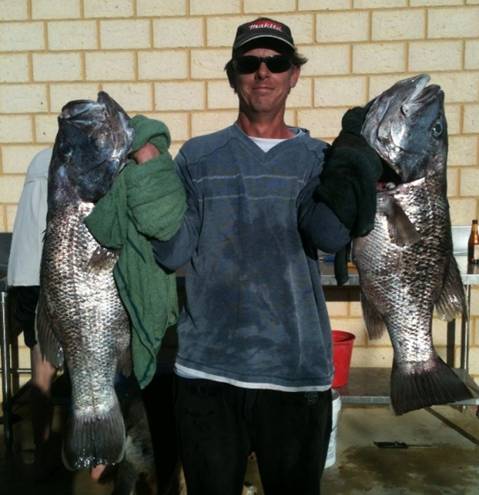 Please do Dean, the big reel in your capable hands will produce some absolute monsters.  Very grateful to clients for the nice feedback we’ve received lately. Ioannis in Greece: 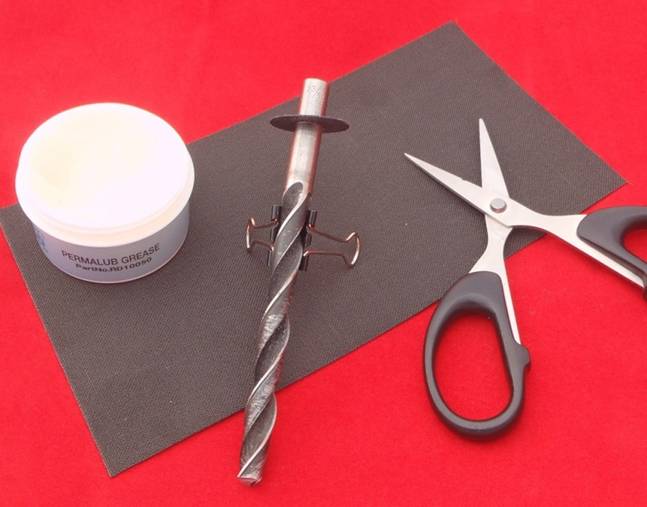 Hello Andrew, I received the carbontex yesterday and they are great!!!

I have already upgraded 2 of my reels and they are working perfect. Thank you for the products.

I just wanted to let you know I bought a cooler bag from you a few months back for my kayak fishing and it worked a treat keeping mackerel in top condition while I was on the water. Keep up the good work!!

I'm getting myself ready and hoping I can crack a metre king this year on my rigger. By the way, really appreciate your quick response. I must say your customer service and after sales service is impeccable and the best I've ever come across. Will be letting all my mates know!

The new carbontex washers I cut to fit my Fin Nor OF9500 and it now has unbelievable stopping power!! I’m very happy with it and the knob on my Rarenium 4000 feels and works a treat!

Thanks lads, you’ve made my week. With tuna steaks over $20 per kilo the last thing you want is to leave big fish lying on the deck.

Pop them in a chiller bag, add some ice, and they’ll be in prime condition by the time you get home: 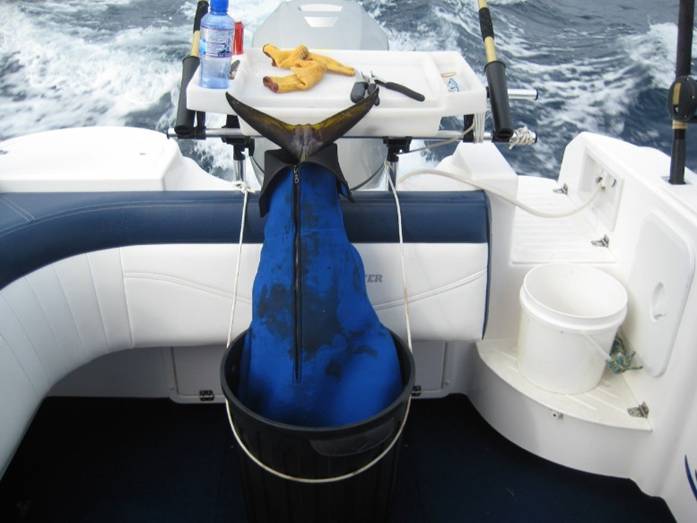 Wayne from Warringah Anglers sends news of their snapper comp, next month. 'Red October', I like it: 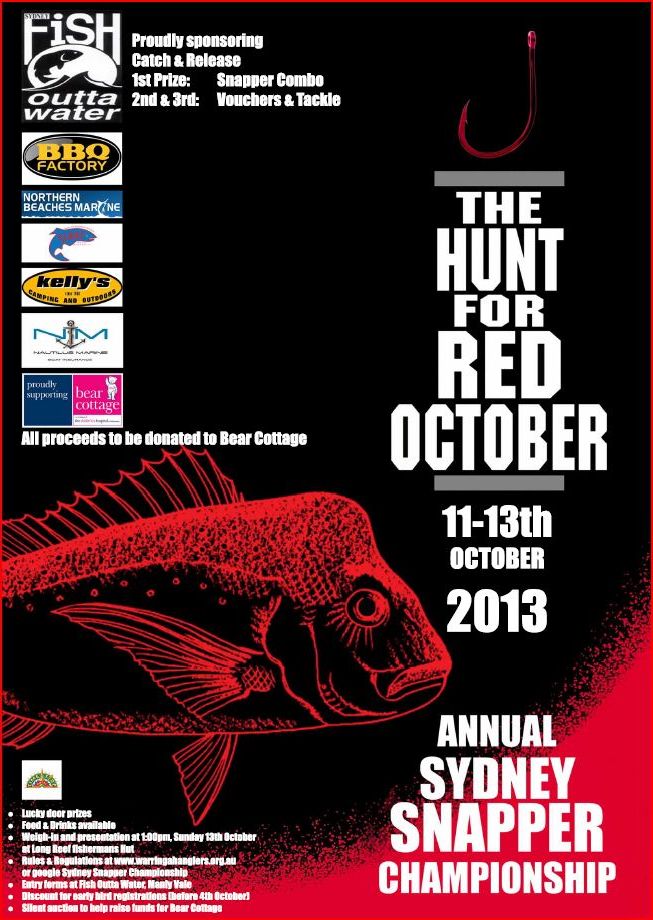 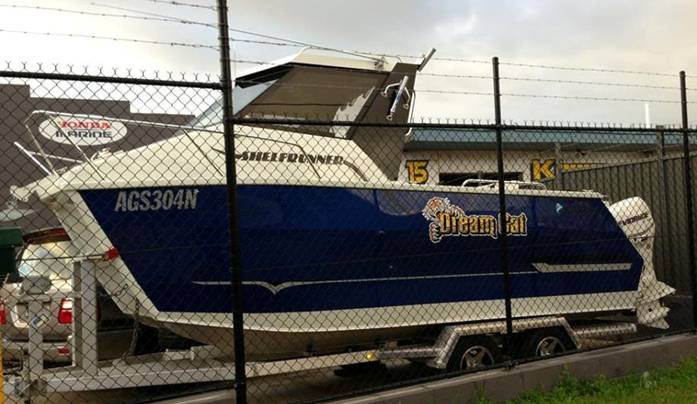 Sold the Tabs, was a great little boat to push the down riggers around Pittwater, my son and I just picked up the new Sailfish, looking forward to some good times with my son. Just couldn't get any better sharing the same hobby!

Mike and (son) Steve wasted no time getting out for a sea trial. Looks like a challenging day offshore: 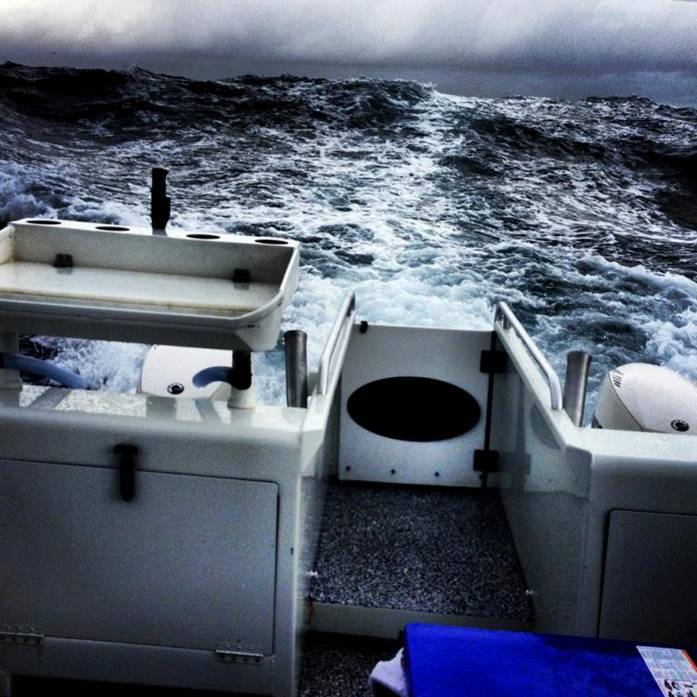 Dang right! Pat and Karen Little went to Rompin chasing sailfish, last week. I hear so many good things about this place: 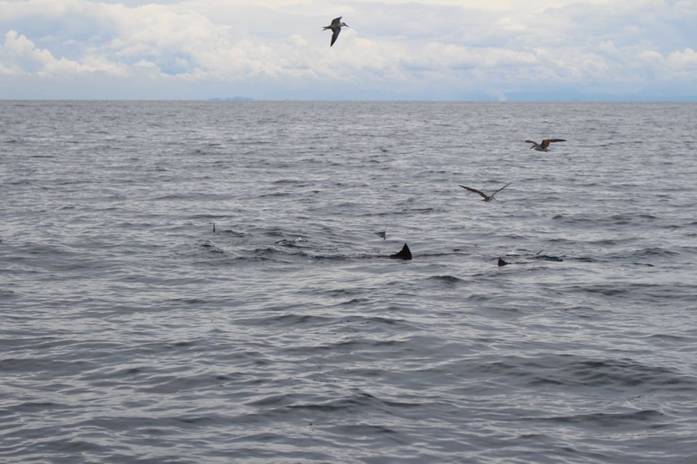 Andrew, just got back from Rompin chasing sailfish, what an amazing fishery with packs of sailfish feeding all around the boat at times.

To be sight casting to sailfish is pretty cool! Your braid got stretched a bit! 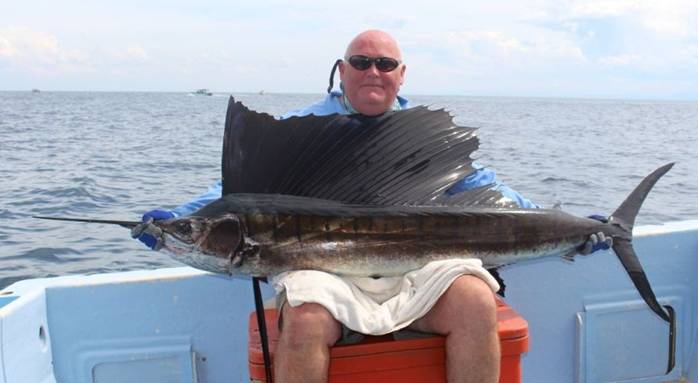 Karen got her first billfish and by the end of the time was becoming a pretty good at it. A couple of photos to share 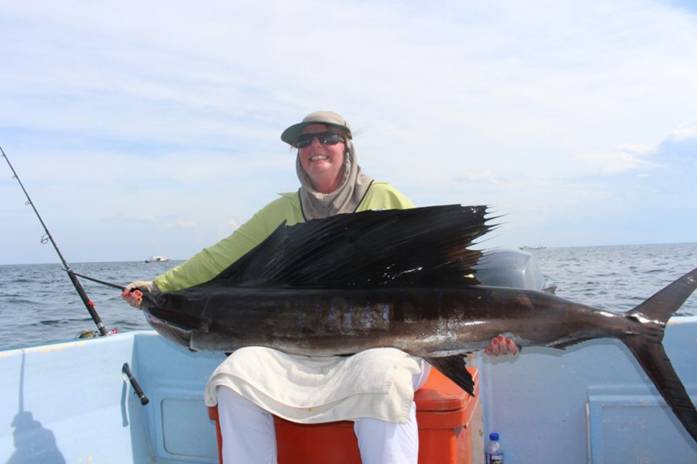 Thanks Pat! In your debt for this top report.

Braid cupboard was dangerously low, replenished after this week’s shipment:

Daryl still on a high, following his recent trip to New Britain: 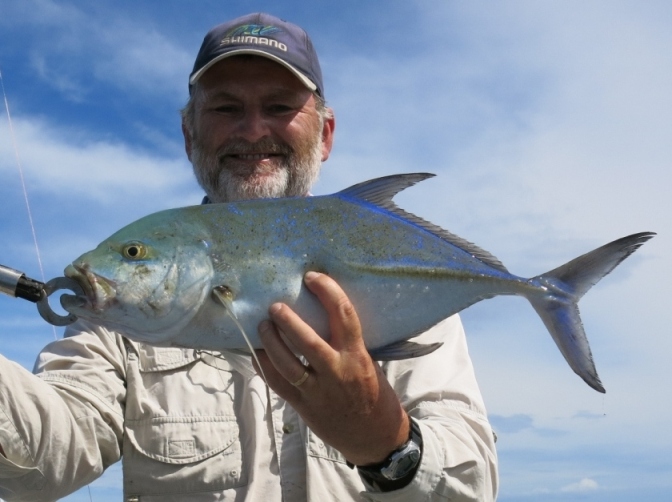 G'day Andrew, enclosed  a few pics of my trip last week to Baia Lodge in West New Britain, Papua New Guinea. It took 36 hours to get there, with three flights, 4 hours 4x4 then two hours in a boat. I've never travelled so long and still be so close to home. Worth the trip for some fantastic volcanic scenery and a couple of the world's icon fish. 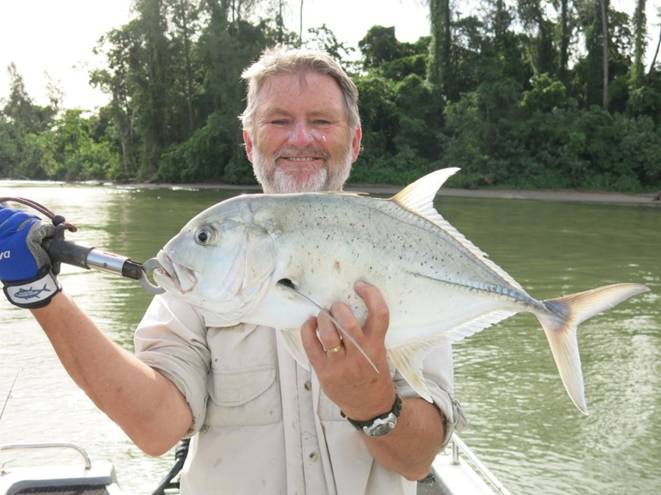 The Spot-tail Bass was 6-7kg and the Black Bass 6.1kg. Great sport and a great place to catch them. Boy are they tough! 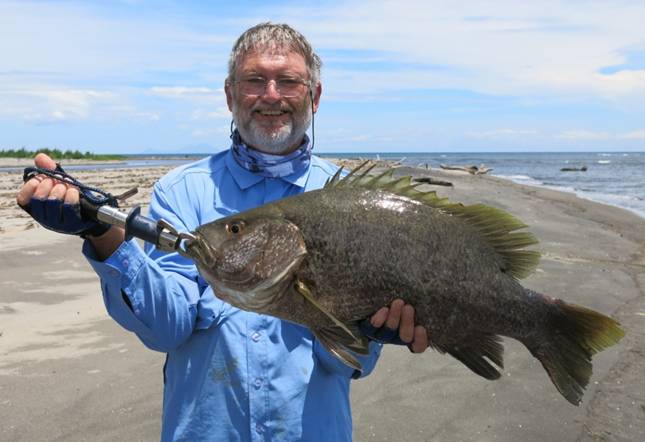 I felt the power of a much bigger unstoppable beast that peeled line effortlessly off 10kgs of drag and a firmly applied thumb. Good lot of bycatch too with lots of trevally, I got GT's, Brassy, Tea-leaf and Blue-finned.

Well done champ and looking forward to having you aboard again. Kevin Olsen fished the ANSA competition at Glenbawn Dam, and generously sent through updates all weekend: 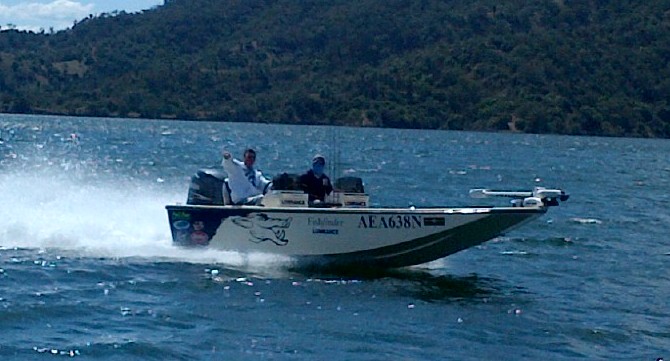 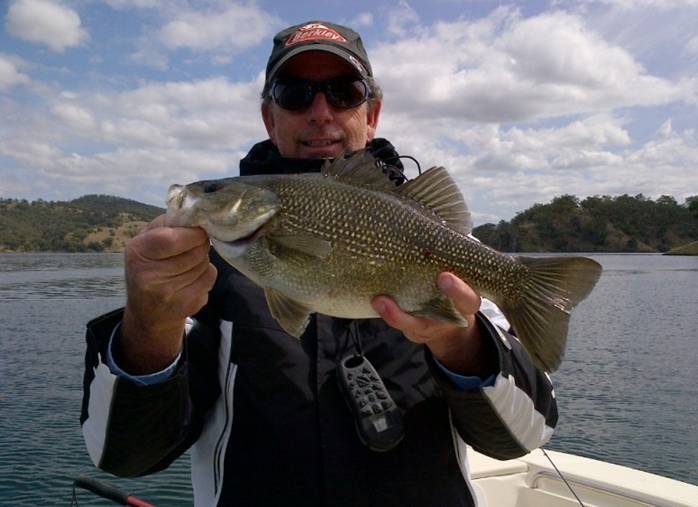 Hi Andy, back from Newcastle SFC's Glenbawn ANSA comp. Ended up with 8 bass, 6 goldens & got this 679mm carp with the last cast of the comp. MWSFC finished in equal 2nd...solid effort as we only had 4 guys from our club fish the comp for a total of 59 fish. Mark O got the longest carp, 685mm...knocked his uncle Kev off by 6mm :) 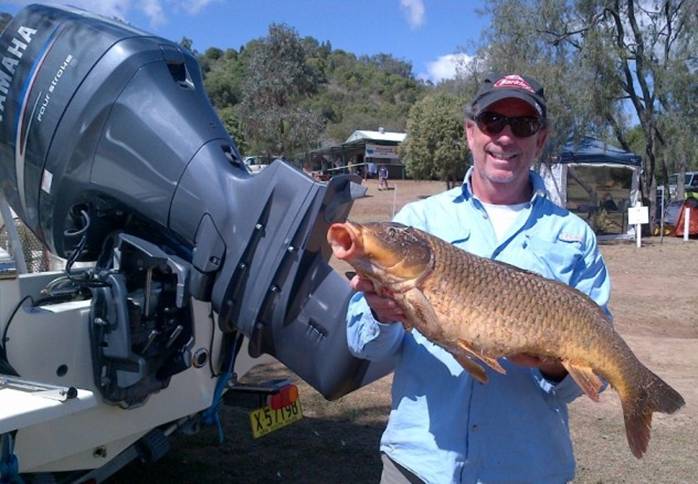 Glad you had a good one, cobber. Alan is living the dream, travelling up the Queensland coast aboard the Carmel D. He stopped by for a 20W game combo before departure, and has been putting it to good use: 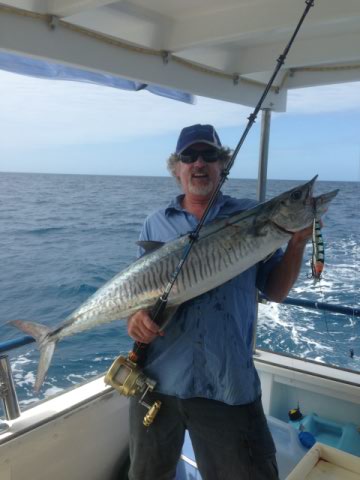 Hi Andrew, Finally got my new rod/reel combo out and scored my first Spanish mackerel right next to where Captain Cook stacked his boat.

Now in Cooktown and heading further north tomorrow. Alan for the Carmel D.

Mate I have said it before and I’ll say it again – this endless cruise of yours along the Queensland coast, catching big fish all day and kicking back over fresh lobster and an adult beverage or two each night, is the stuff of which dreams are made. If you ever want to adopt a middle aged bald tackle salesman and raise him as the son you never had, you know where to find me. J

To politics, and Bruce Rayment over the moon – like we all are – to hear (in last week’s report) of progress in the fight for access to Lagger’s Point boat ramp:

A 7am start to not have to cross the bar at SWR is fine. I’ll pay whatever I have to, not to have to subject my wife and kids to the Macleay River Bar. Attached is an image of us crossing the bar in April 2008 – nice conditions once over it, but a bloody tough crossing that required a change of underwear afterwards.

Nasty. I remember so many times when we used to cross it regularly (back in the 80s aboard Gunrunner, with Dave Payne) the crew would go very quiet until we were safely back in the river. Darryl Giles calls for tolerance between rec and commercial anglers: 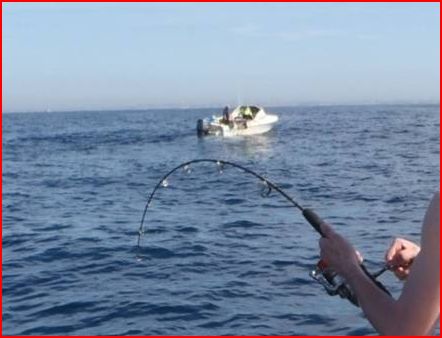 Hi Andrew just had a look at the last report. The photo of the pro in the back ground is a good mate of mine and a real good bloke. Monday week back he was out at 12 Mile and was harassed and verbally abused for fishing there. He described the boat and the blokes, I think I have seen them out there. What these d**eads need to remember this bloke is trying to make a living and also he has lost count the amount of boats he has towed in .I have been with him when he has towed boats back in and you are flat out getting a thank you. There is enough room for everybody.

Agreed, and good on you for speaking up in his defence. Battle scarred greenie fighter Les Palmer attended the grey nurse shark symposium in Brisbane yesterday, all on behalf of angler access rights.

Going up against some tough opponents - animal libbers, who want all fishing banned on specious ‘cruelty’ grounds:

( ‘I hate humanity.’ Thanks for your honesty, greenie.) Also attending, marine 'scientists', hooked on the politico-research gravy train; dive operators, happy to stage hooked shark photo ops to protect their money tree; and lazy journos, too addicted to being spoon fed with greenie press releases, to acknowledge grey nurse sharks range temperate seas right around the globe. Going up against this ratbag collective was Les Palmer (cue the theme from High Noon):

Leaving Brisbane now. A big day yesterday at the meeting. Lots of radical Greenies/Conservationists to hack my way through. Was a good result I think. Will give you more detail when I get home tonight or tomorrow. Cheers, Les.

Sounds good and hope to have an update for our readers on that important issue, next week. Until then my friends, please keep the great pics and stories coming in! It does not have to be some giant tuna caught way offshore – although those are very welcome. J It’s a rich tapestry, this fishing caper we’re addicted to, and any and all aspects of it are endlessly fascinating. Thanks for reading and thanks even more for your contributions,