Big kings in shallow water. If you beat one, it’s a real accomplishment. John McKenzie: 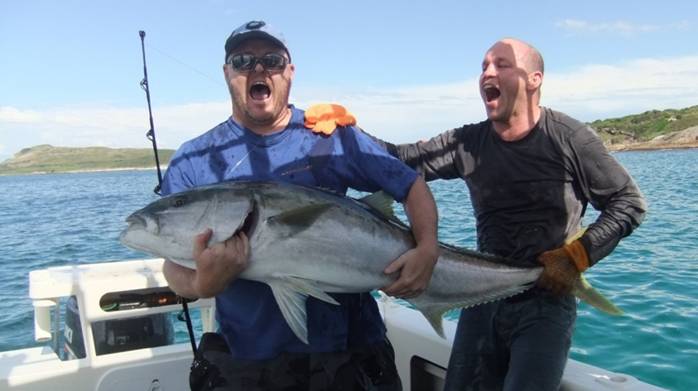 Hi Andy, told a couple of mates where to go and what to do- this is the result. Hooked in 6 foot of water this fish travelled approx 1km around the ocean before being landed

Unforgettable moment, Johnno! I see you’ve been putting a few points on the board yourself: 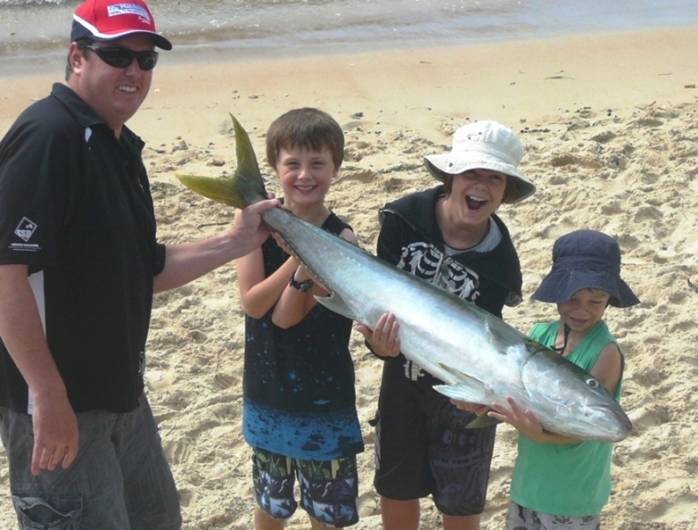 Hi Andy,  average size Kingfish that we catch  I’ll find some other photos and send through Cheers John

Please do champ and let me know how the Jig Days handle those bruisers? Kingfish around the Coffs area are on the rampage at the moment, with friends and clients sending in some really exciting pics. Shane’s been making the most of the golden run: 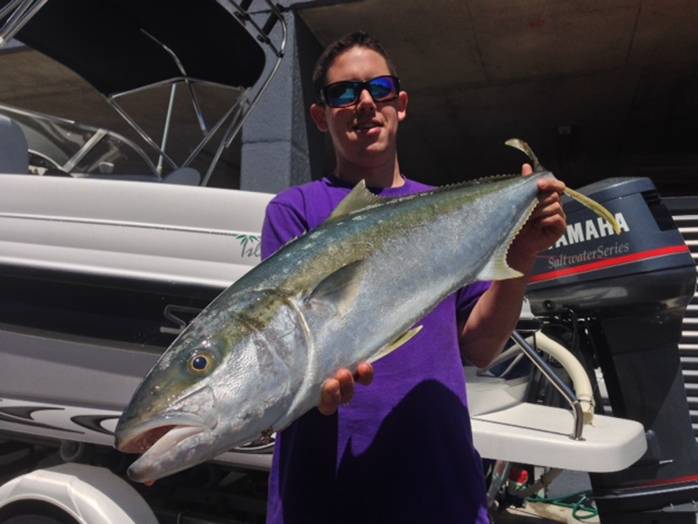 Hi Andy, Just wondering if your 400gm jigs have turned up in stock yet? Please let me know when they do!! Good to see all those yellow fin down south. None up this way in Coffs but got some nice kingies the last couple of trips out on the downrigger. My best was this 14kg and also my mate got this 1.0m model last week when we went out last weekend. 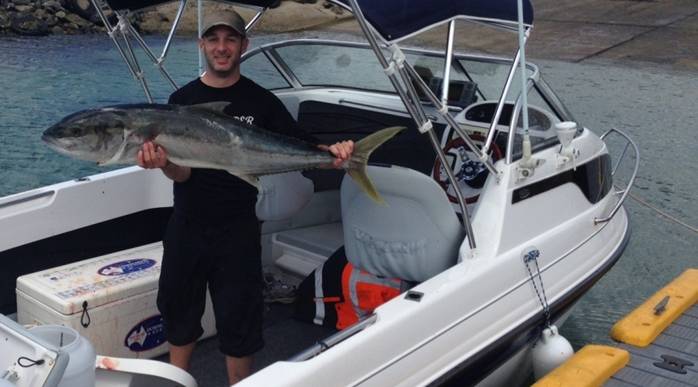 In the next shipment Shane, arriving 10-15 November? Thanks for the pics cobber and keep sending them, even though they’re tearing me apart. J Mark is stuck in the Old Dart, but keeps in touch with matters kingfish via our weekly newsletter. His brother just had a (Ron Weasley voice) ‘brilliant’ trip, with Carl from Epic: 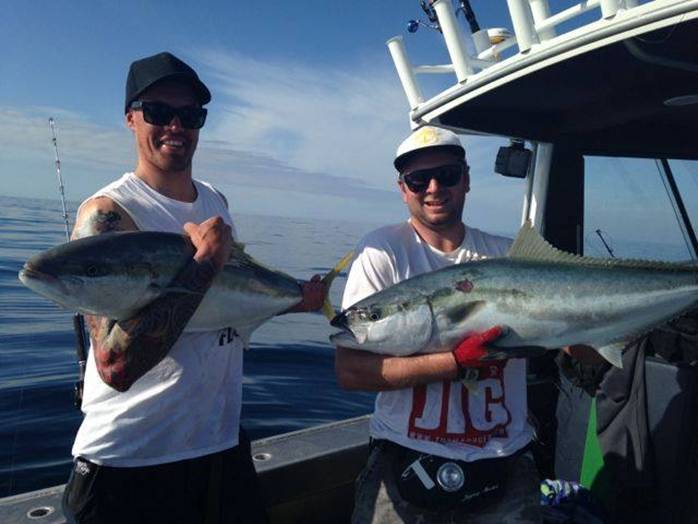 G'day Andy, I am an Aussie living in London, and love ur newsletter. My bro in law just got back from fishing in NZ. He fished with Epic Adventures out of Coromandel - they have already booked to go back same time next year. 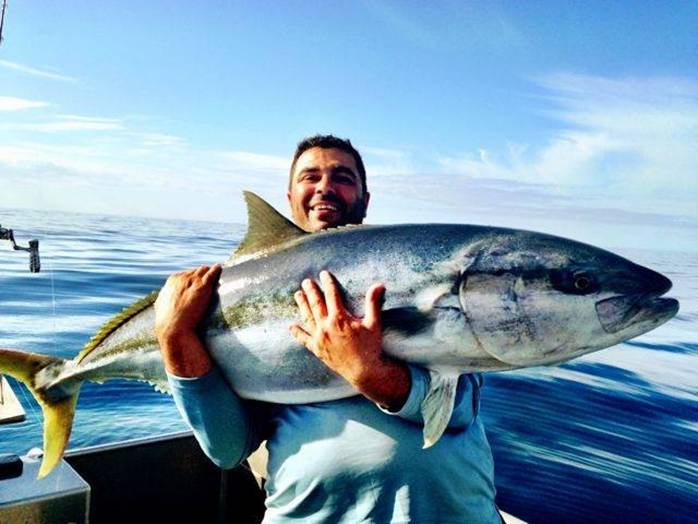 He reckons minimum 5 x 15kg+ fish per person per day, and that big hoodlum tipped the scales at 35kg (those hapuka were caught the week after they went). Keep up the good work. Tight lines 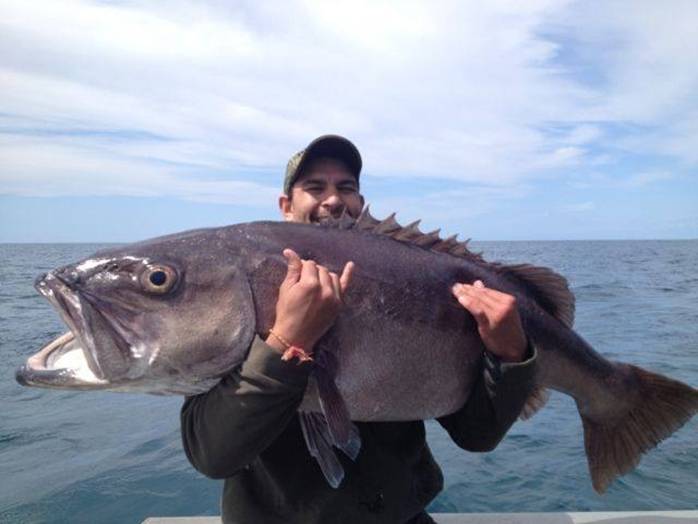 Sort of alternately excited and depressed by these pics, Mark! Thanks so much, bud. The other big news across the fruited plain is the amazing run of Spanish mackerel in central Queensland, and points north. And as usual, our clients are right amongst them. Damien Butler: 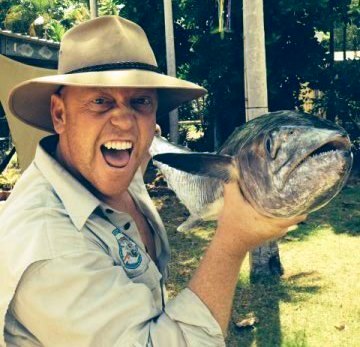 Andrew, Damian here, cleaned up with your rigs, first hit in 3 minutes!! Do I get discount on the next order if I send ya these through lol? Head Start was in the middle of the two (previously) best Spanish mackerel lures we use, score was four hits on head start rigs, Laser Pro and Blue Water lures zero 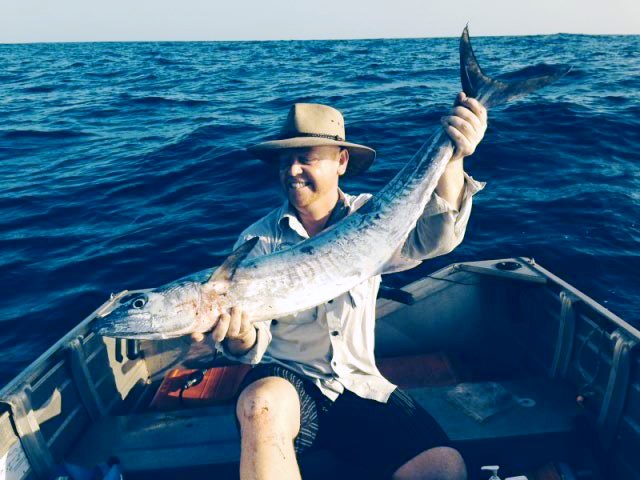 You deserve much more than a tackle discount, Damien! You’ve won that pearl beyond price – my respect. J Rob Templer’s been nailing them too, on the Head Starts: 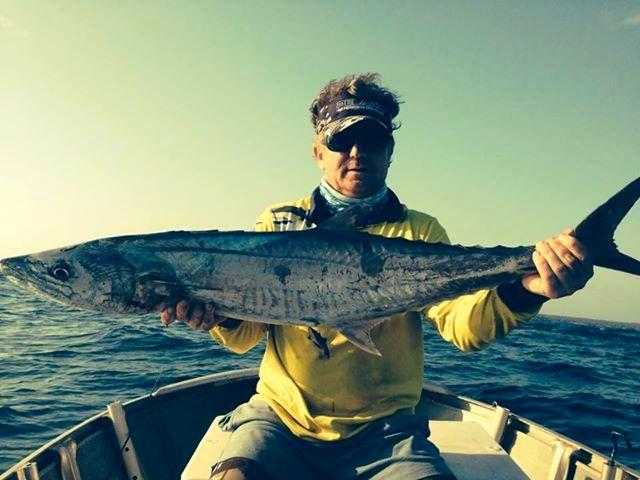 Hi Andrew, I bought some Head Start rigs and a reel knob off you. The rigs are awesome. First trip we landed two Spaniards out of 4 strikes on the Head Starts. Our lures weren’t touched. Seems that we only have a 50% hookup rate with the Head Starts though as they only have one hook. Mind you we are only after Spaniards and they have pretty hard mouths. 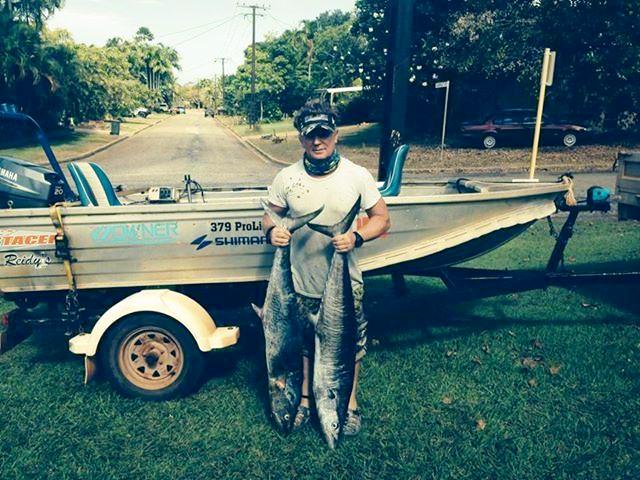 So good, Robert! Amazing fish from your little Stacer, too. Grant’s been jigging some monsters around the Whitsundays: 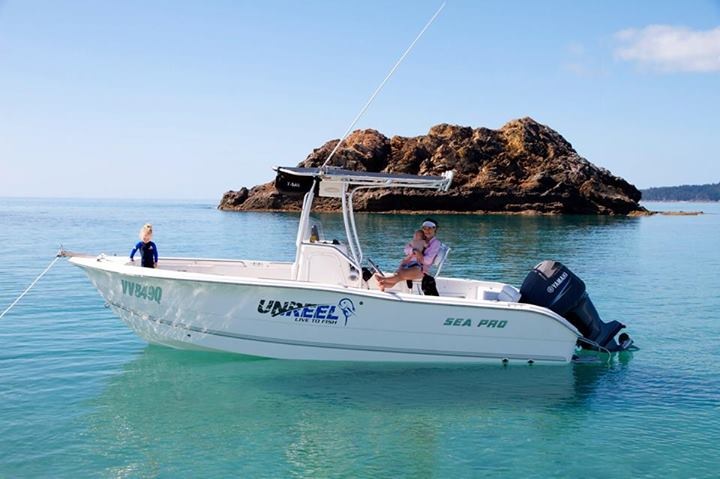 Andrew, hope you are well mate! We have been smashing fish on your jigs up here in QLD! The Spanish are loving them…..I referred a few other lads who all bought from you, armed with about 10 each we cleaned up on the Spanish in deep water. 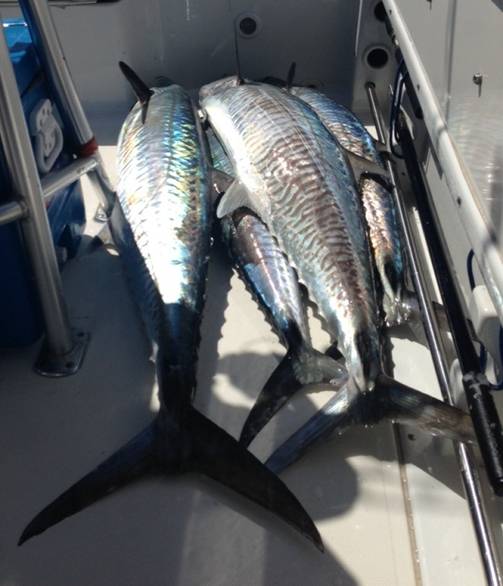 Pretty chuffed as we have been getting really good sized fish too, after boating 4 fish over 28kilo in about 10 mins, (it was like clubbing seals)…we ended up packing away the jigs and resorted to flyfishing for them! 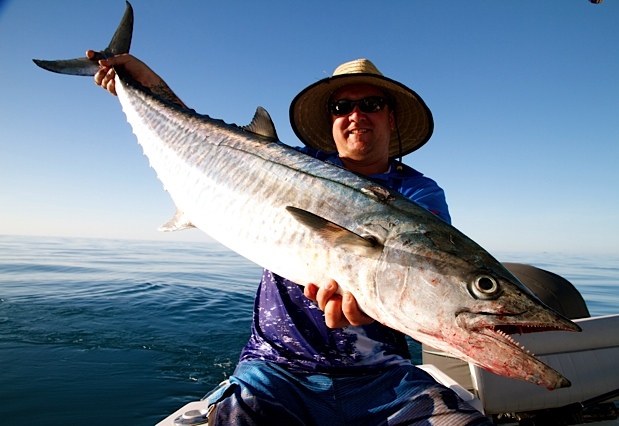 I’d like you to send me a PayPal request for the following:  Head Start with weights:  2 x clear 2x red 2x blue Popper version: 2x pink 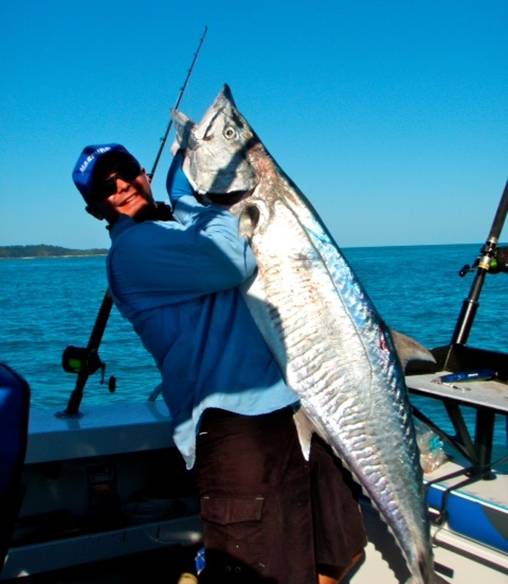 Will do Grant, your report has got me stoked. Further south, and John picked up a nice barracuda, in amongst the mackerel schools: 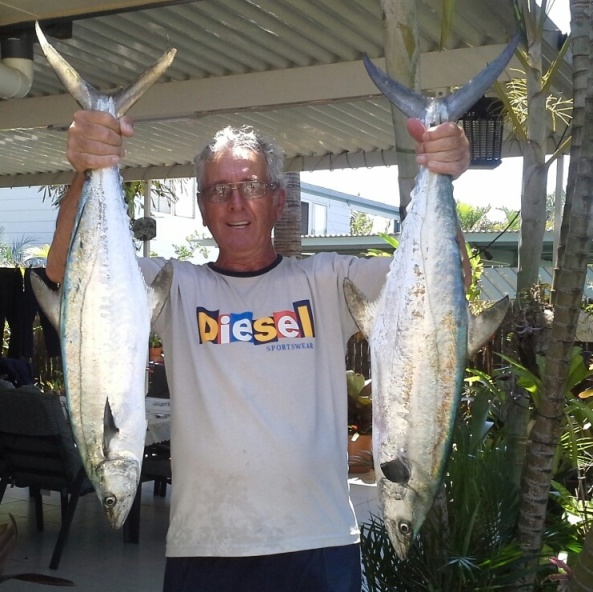 Hi ANDY, you mentioned a little while ago something about a..."stinger spoon" with stinger. Can you enlighten me some.... I intend to use them trolling for mackerel here in Tin Can Bay.  Have a look at some pictures from Yeppoon  .....a week or so ago. I did have a lovely time catching these.....and the weather was fine. 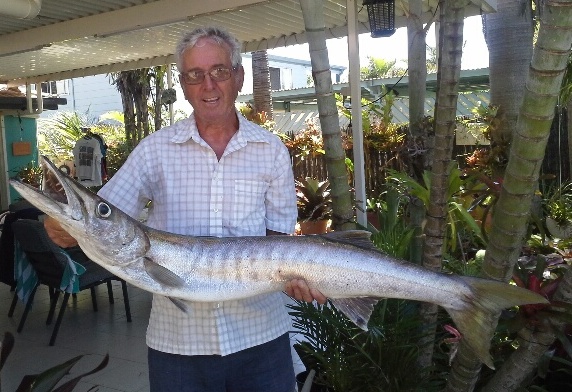 The Barracuda is 140cm

Very nice John and thanks, for the pics. Your timing’s impeccable because, on Friday, the factory emailed pics of some samples they’re sending me. Firstly, the spoon. Hook is a VMC:

Soft plastics are 9 inch. Mick made some for us here but we only got to try them once or twice last May before the Harbour SP season ended. Caught two kings at the Tripod, right under the noses of a couple of anglers fishing with squid, which was both embarrassing and pleasing. J Expecting big things from these puppies this summer, just need to source some super flexi multistrand wire for the stinger treble. Updates to follow in the weekly report.

Across the pond, and cheeky Kiwi Dave Adams sends word of a nice red: 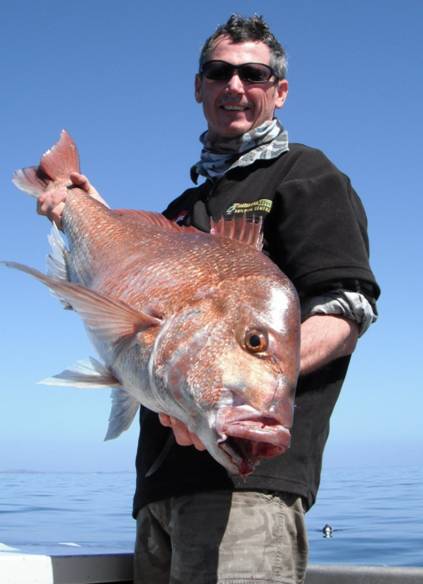 Hi Andrew, despite your reports coming from our western island they’re always a good read. You appear to have much more of a [ongoing] scrap with your fisheries policy makers than we do, not that we have it sweet by any means. Keep up the good work you do by informing your readers.

I’ve attached a pic of one of my recent catches on the north east coast of NZ. This one is a snapper of 11.183kg caught on 6kg IGFA mono and a natural bait. She was only 80cm long so she was a really stocky fish. The reel is an Okuma Salina that I’d only just refurbished with some of the Carbontex sheet I purchased from you at the beginning of this year. Silky smooth is a good description of the drag, thanks

LOL. I gotta admit, the Shaky Isles produce some giant snapper and kings, Dave. Glad to hear the carbontex has been a big hit. John stopped by for a jigging combo and showed me pics of the boat he bought last weekend:

Gday Andrew, thanks for your time this morning; I’m looking forward to heading out and testing the new gear!!!!  Please find attached a couple of pics of the boat which I purchased on the weekend. It’s a 2003 Momentum- Momentum only produced around 12 of these boats. Its 6.2m, fibreglass with a Yamaha ’03 115 four stroke with just on 400hrs. As we discussed the engine is a little small and I will be looking to upgrade shortly. If you would be able to let (readers) know about the engine and see if there is any interest!!!! 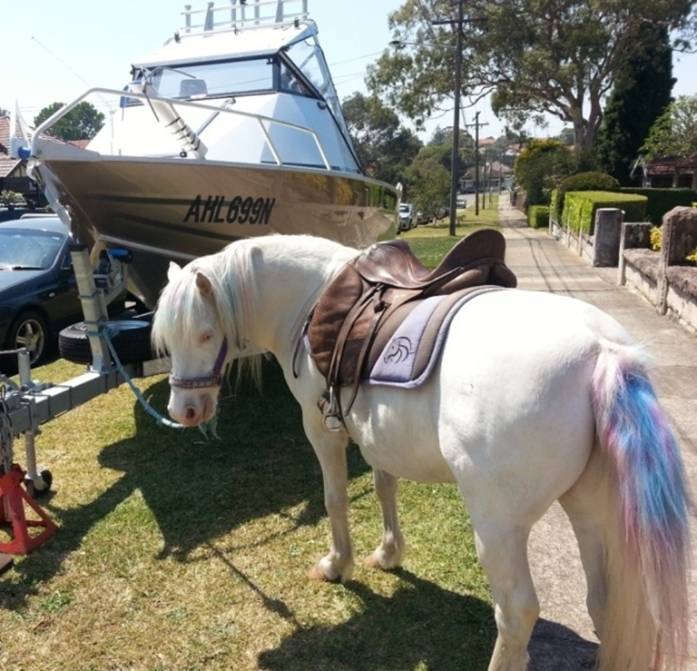 Too right I do! Good on you Dan and please keep them coming. While we’re off topic I received the chain email '25 Ways To Show You're A Man' this week. Thought this one was pretty good: 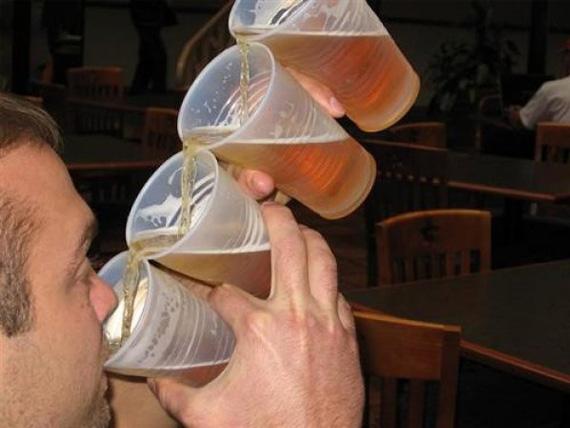 Crossbow casters, for when you want your bait way out the back. Andrew Westlake sent me the pic from a Chinese tackle store:

Mitch saving up for a downrigger but in the meantime, he’s making do: 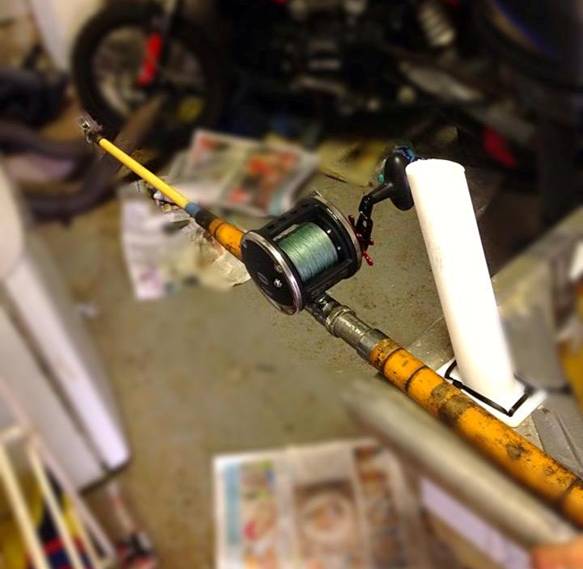 Here's the little setup! Haha. It's nothing special but the concept is there, used an old game rod cheap overhead and mounted rod holder in back corner!

Too right it is and good on you, for being so inventive. John Wright whacks a Downrigger Shop sticker on his race car. Thanks, Johnno! 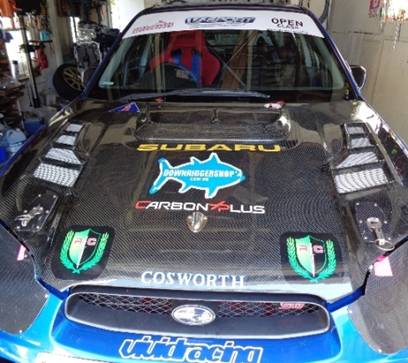 While Matt Cassar put one on his pride and joy: 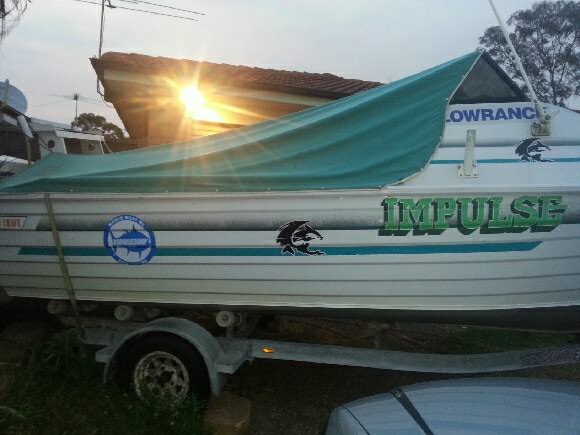 Client and friend Chris Adams selling his big Trailcraft. A bit shocked to hear that because the bloke’s life revolves around fishing. I’ve been to Browns on this one, rock solid rig and in immaculate condition too: 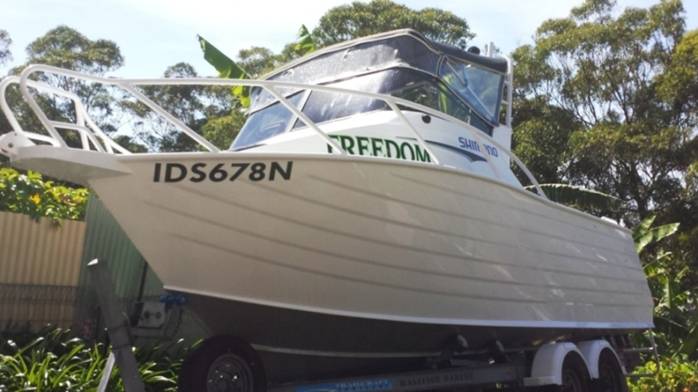 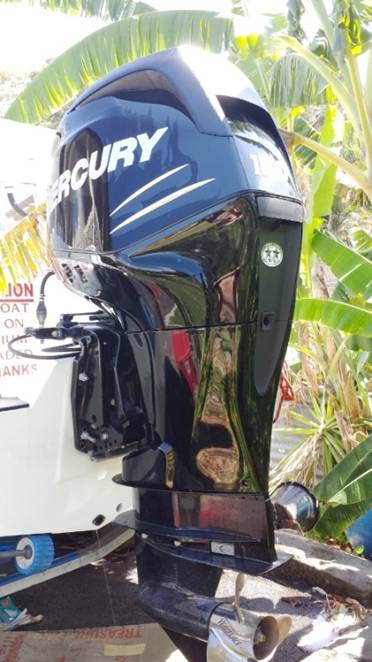 NEW LED SPOT LIGHTS AND REAR TRANSOM MOUNT UNDERWATER BLUE LIGHT, SELF DRAINING DECK, CUSTOM RUBBER FLOOR, LIVE BAIT TANK, KILL TANK, 250LT FUEL TANK, TWIN BATTRIES AND ISO SWITCH,THIS BOAT ALSO COMES WITH CUSTOM MADE FULLY FITTED COVER COST OVER $3400 THIS BOAT HAS LOADS OF EXTRAS AND HAS BEEN METICULOSLY MAINTAINED FROM ONE OWNER, AND IS POSSIBLY THE BEST TRAILCRAFT 610 AROUND IT WOULD SUIT A NEW BUYER AND IS A REGRETFUL SALE. PRICE $47000 ono PH CHRIS 0402465655

Good luck Chris, that is a top boat.

To politics, and mucho protest locally about Roseville boat ramp, one of the most popular here in Sydney. It’s hopeless – expensive to park, poorly designed for launching, plus the carpark and access roads have potholes deep enough to wreck your suspension if you don’t avoid them. Hundreds of thousands of dollars have been wasted on ‘improvements’ that have made the ramp worse, not better: 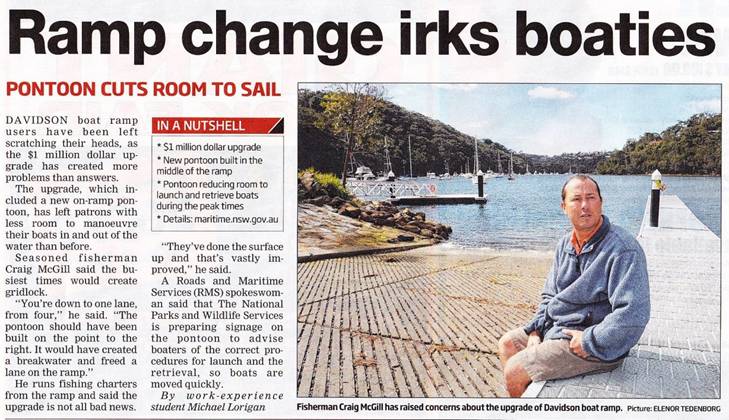 Now the powers that be have decided to resurface the carpark by closing 70% of available parking space, rather than doing it in sections: 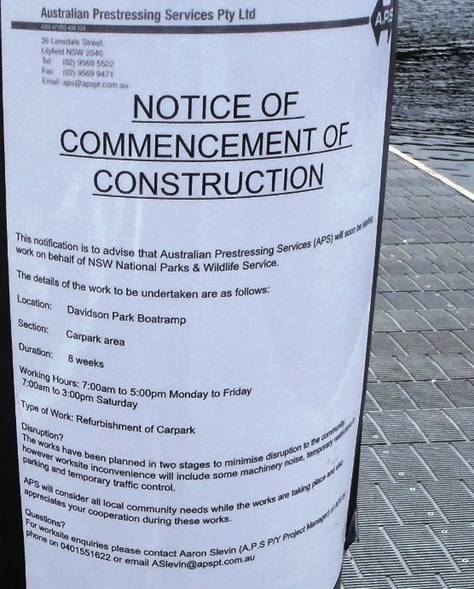 Ramp users are justifiably furious at being shafted, two summers in a row. Matt L says:

Hey Andy, do you have any knowledge about these works from your contacts? Are they going to screw the whole ramp again for 6 months! It was crazy there yesterday I got last spot at 630, before people started all the illegal spots blocking roadpaths etc which really screwed me when I came back trying to squeeze my long and wide trailer thru I almost cleaned up 3 cars and trees along the way, not fun! 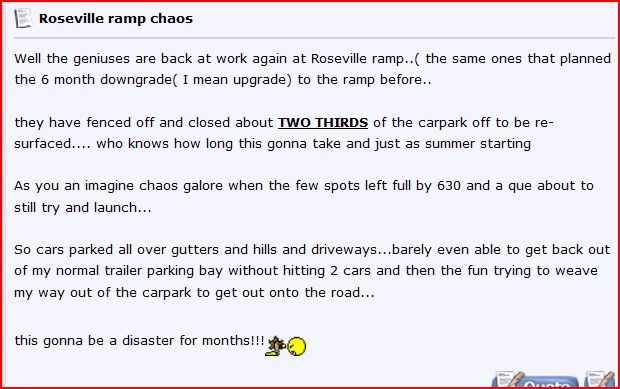 Kevin writes to me: 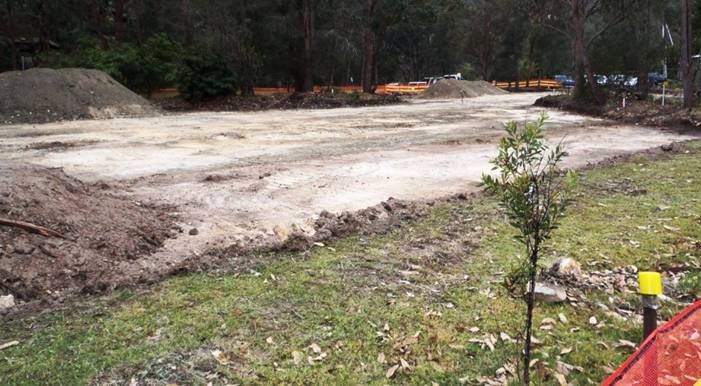 … went there today and I thought ARE THEY SERIOUS? Appreciate that they are improving the facilities but the timing is terrible! Will be lucky to get a park in the weekday, let alone the weekend.

Exactly. Have no doubt, Kev – the inconvenience is intended. And very little can be done about it now because the NSW government’s attitude to anglers and boaties is one of endless contempt. They’re in self denial about their collapse in voter confidence, despite the record by-election loss last Saturday. We know that submissions, letters to Ministers, even angler protests attended by hundreds of fishos result in no improvement or policy change. Meaning the only way forward is a political response, with fishos making their votes count at the next State election. The good news? NSW anglers are so fed up, we could make a real difference this time. The bad news? The election’s still eighteen months away. But maybe we need that much time to get organised. J Until next week, and as always sincere thanks to our readers and especially, contributors. Please keep the pics and reports coming in? It’s your generous efforts that make this weekly email worth reading. Cheers,