Countdown to Christmas, and the fishing just gets hotter and hotter. Dave Clarke: 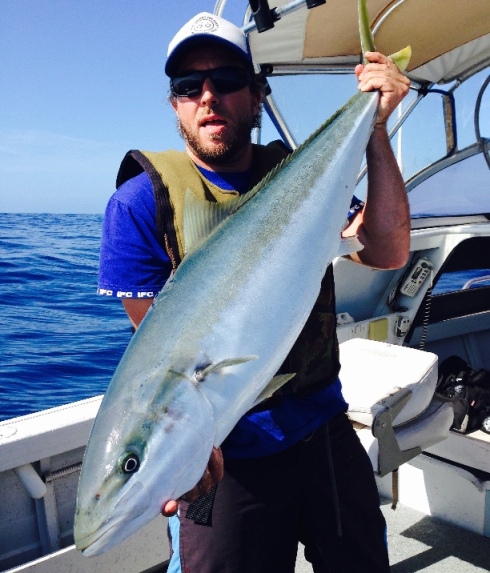 Hi Andrew, your jigs have done it again. Just got a new PB King off Greenwell Point. It went 112cm and smashed one of your pink 250gm jigs about 90m down. I'm Stoked!!

I’d be stoked too, because that’s a beast. You are having one hell of a season, Dave! Ginna in amongst the action too: 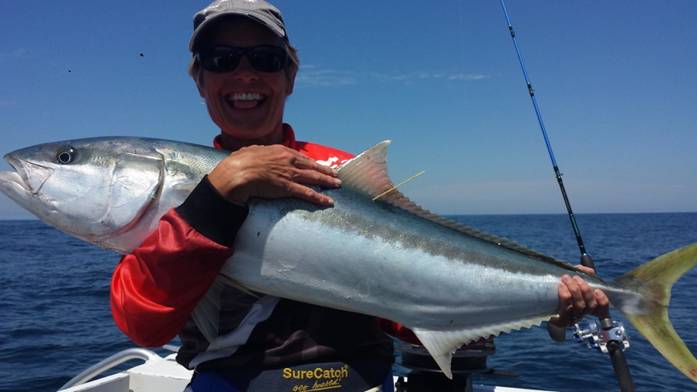 Hi Andy, Kings, Samsons and Amberjacks Wow what a buzz, won't forget this one in a hurry, My PB King 114, caught on a slimey, at Long Reef

What a beauty and good on you for tagging and releasing. Rebecca Fazio scored a king on her microlight tackle at the Australia Bream Tournament. This would have been a memorable battle: 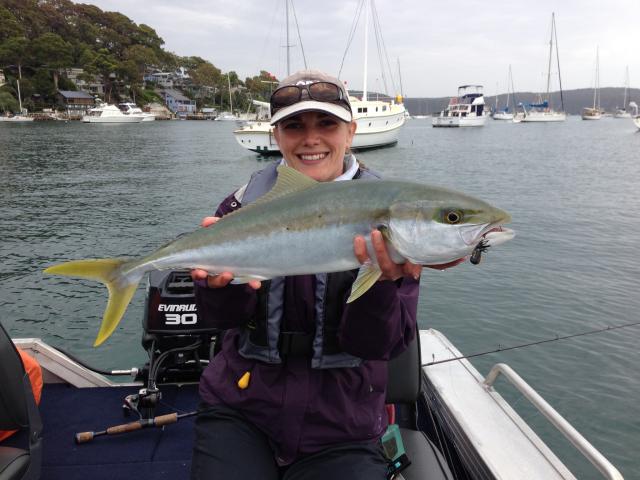 Just finished the ABT Grand Final on the Hawkesbury targeting bream. Was a tough event for many anglers and a lot of water was covered to get a bag of five bream each day. Congratulations to Kris Hickson who claimed the winning position narrowly pipping Ross Cannizzaro by 50g for the 3 day accumulative total. Bream were caught from upriver of Spencer to the far reaches of Brisbane Waters and the many boat holes and pontoons of Pittwater. And very happy to have finished in the The Top 10 non-boaters division. Even though it was a bream comp, a highlight was landing my first kingfish on bream gear in Pittwater. This 63cm kingfish was landed on 4-pound line and chased a distance of 200m through the moored boats including being wrapped around a mooring rope and the electric motor. It fell to an Ecogear ZX3S30 blade and released after a few happy snaps. 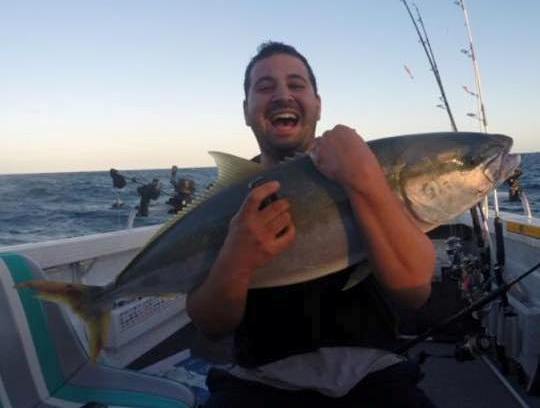 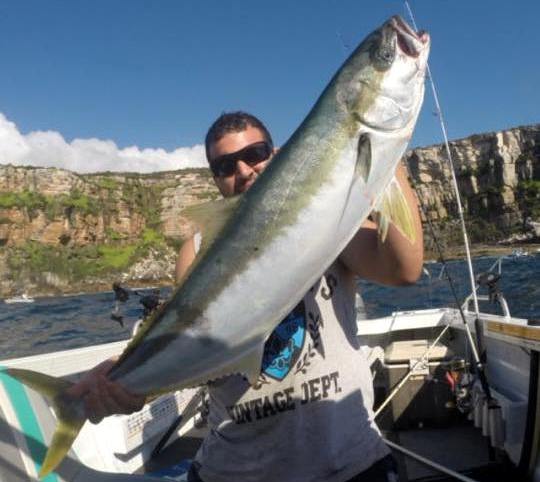 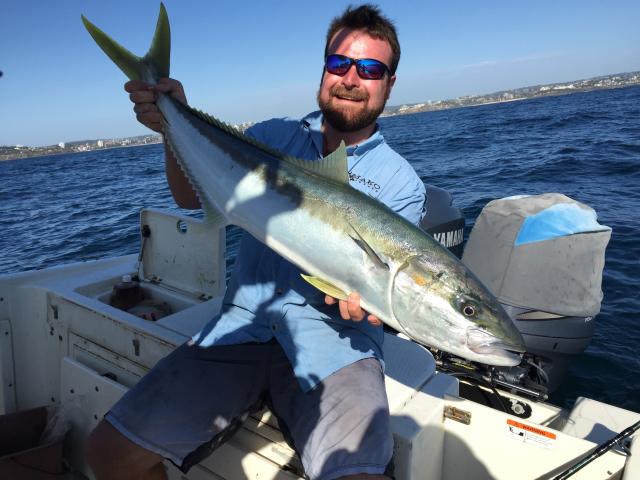 How’s this for a jaw dropping kingfish? Thanks to Geoff Wilson, for the pic and story: 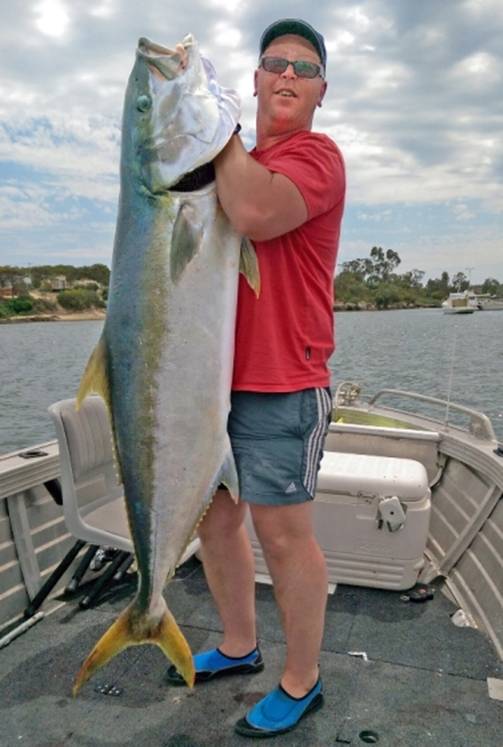 Hi Andrew: I probably should have sent this to you already but what with Bill’s court case and being involved with organising the anti-netting protests down here it slipped my mind. Anyway the photo and report is of my friend Tom Vandeloo with a 1.6 metre, 43 kg (95 lb) kingfish from the shallows of Coffin Bay South Australia that I used in my weekly newspaper column. You don’t see too many that size.

No you certainly don’t. So grateful that you sent this through, Geoff. Still down south, and Westy went sharking: 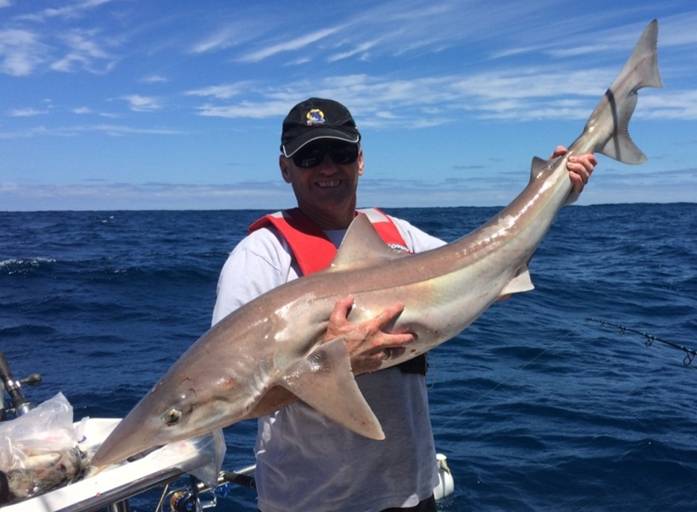 G'day Andrew, managed this 20 kg schoolie and some snapper to 49 cm today. Drifting off Warrnambool. 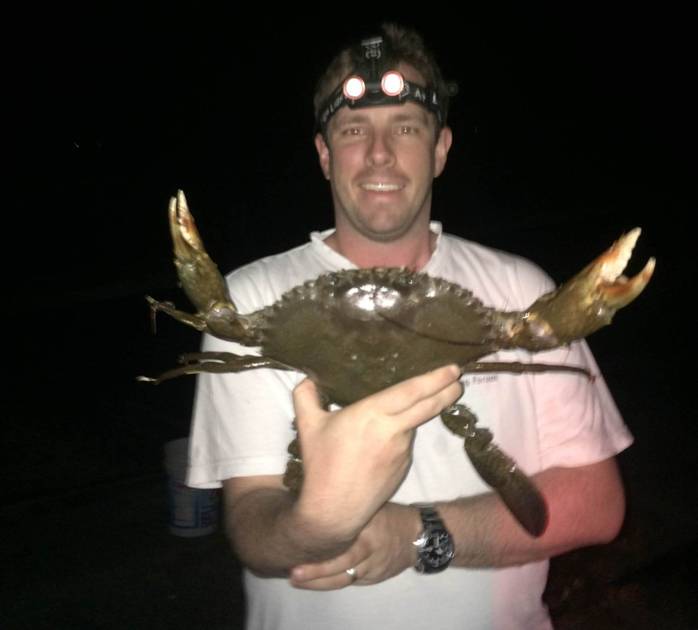 Andy, managed a nice mud crab from lake mac.  Released it thinking you can't keep female crabs and am now dreamin about about what could have been.  The damn thing weighed a couple of kilos.  Was a donkey.  Got it in the prawning net 2m from shore in 20cm of water.

Nice one bloke, I can’t believe that one went back in. Wazza on the Central Coast too and justifiably pleased with his PB king: 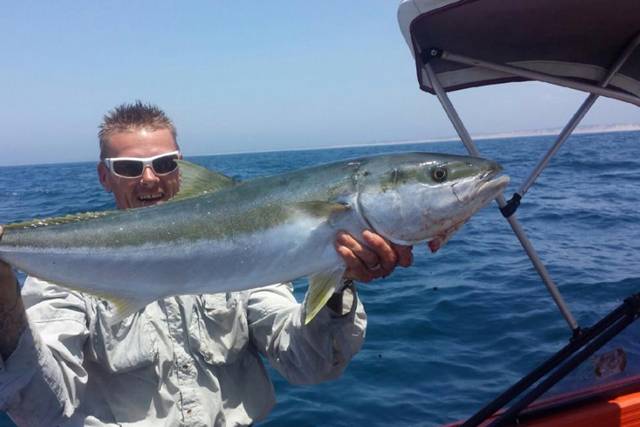 Beautiful champ, one like that would be my best Christmas present ever. To tackle news, and Phoenix reels finally back in stock. What a great bit of gear these are, for livebaiting, downrigging and jigging: 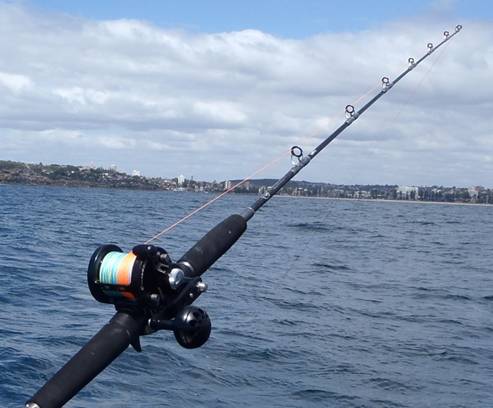 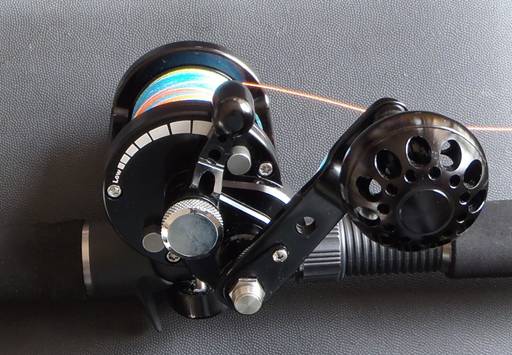 Both can be mailed. Ken Musgrove and I were bass tragics, at school. Not big noting by any means but pretty sure we were the first to arrange a bass stocking in NSW - back in the early 70s when Cheryl Chamberlain was working at the old Fisheries office. Ken and I would regularly day trip the Nepean in his Gladding inflatable or overnight down the Colo in a fiberglass canoe. And when we weren’t fishing for them we were saving up to buy bass lures – catching the Bondi train to Hank Newman’s tackle store and buying Arbogasters, Deep Sixes, rubber Flopys and the like. So it was great to hear from Ken this week and find out he’s still collecting: 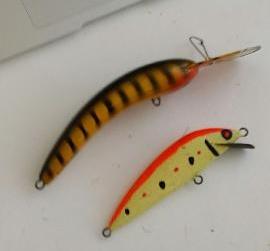 Here's something you don't see every day. A Peter Newell Kadaitcha and an Eric Moller minnow that I have just added to my lure collection.

Nice. I’ll borrow those for the next trip to the West Normanby, if you don’t mind. Dan reckons most micro jigs on the market are way too expensive, and sends me this eBay ad by way of proof: 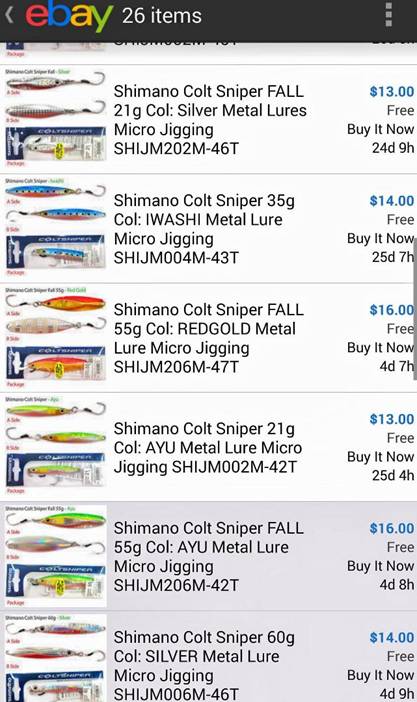 Meantime Cameron’s pleased with ours: 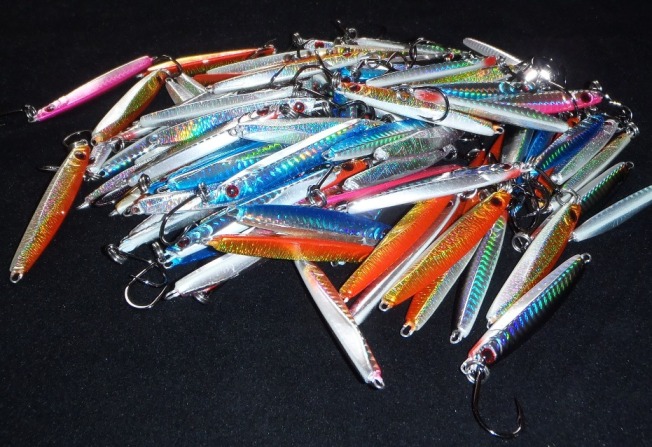 Hi Andy, got the micro jigs today mate got to say totally impressed with the quality and price thanks again

Heading northwards and Craig Marsay out there in near perfect conditions: 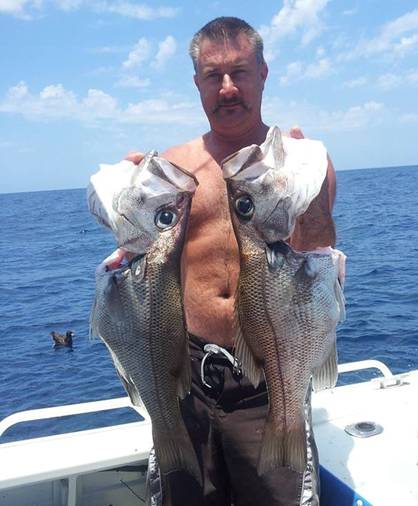 Hi Andy, here are a couple of Nambucca Heads pearlies

Beautiful perch, Craig.  John Rapa scored a big one on the border: 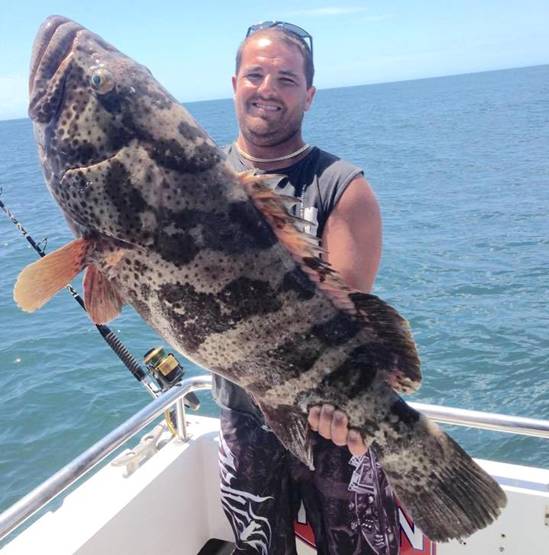 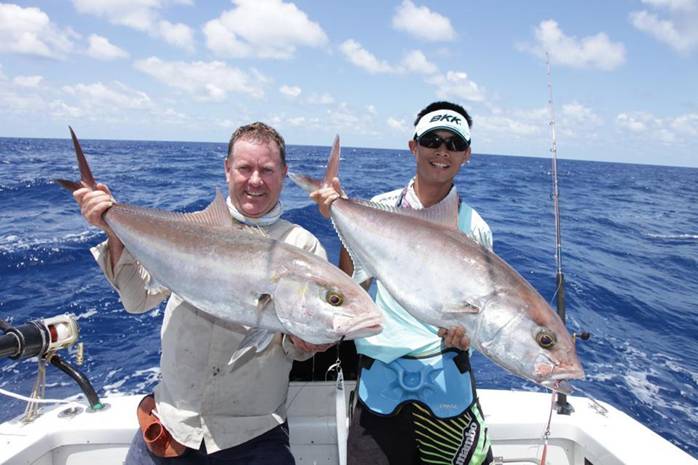 Hi Andrew, a bit of fun up on Breaksea Spit Qld saw us get into some arm stretching enjoyment with 12  - 15 kg Amberjack. A dozen played the game with multiple hookups the norm. Your jigs are working great.  As you can see the big electric is never far away and always gets a good workout. :)

That’s good to know and trust you to be getting into those beauties. Can’t wait to get back up there, I really can’t. Trevor Jane nearby at the Ausfish meetup last week: 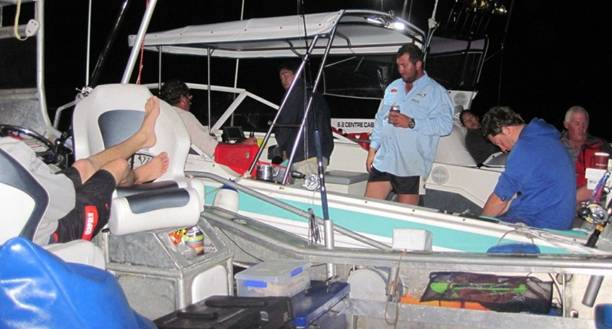 Hi Andrew, Mark and I went for a trip up top end of Fraser Island - Breaksea Spit. We caught some fish and lost some monsters and met up with some mates and brought home a feed. A good time was had. 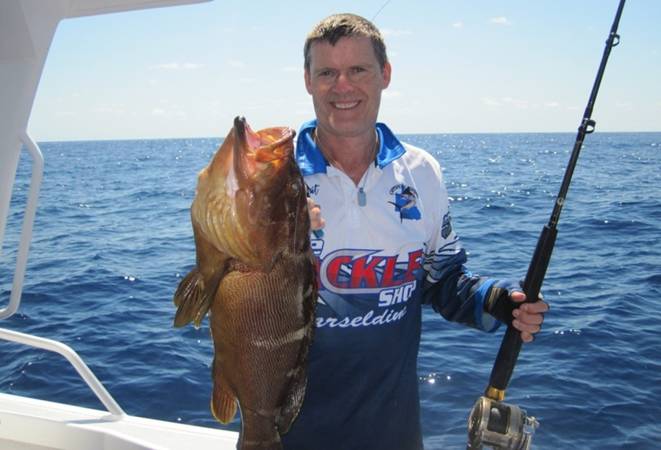 Great weather, big fish, catching up with mates over a coldie at the end of the day. You just feel sorry for blokes who’ve never experienced how good fishing can be. We went past the Urangan Pier on our Hervey Bay trip and Johnno told me it was a top spot. Thanks to George, that’s confirmed: 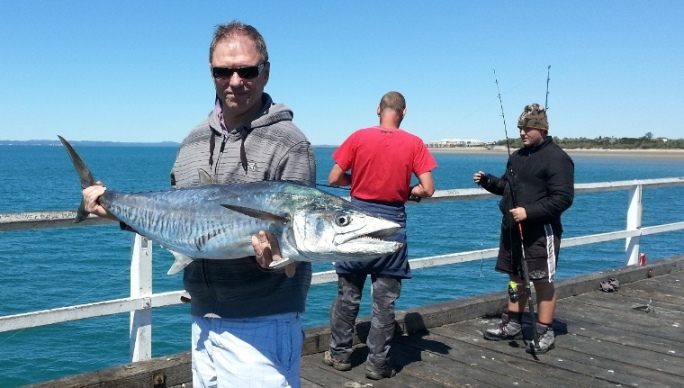 Hi Andy, I know you just came back from Fraser but have look at what my friend caught off the Hervey Bay wharf, he says that the wharf is about 1km long. Cheers George

Cheers to you too champ and thanks for the report. To boating, and Craig Marsay has a novel response to a common problem:

My boat had a petrol stain from the breather. Rather than get it repainted, I decided to do this:

Good result. I got a friendly wave from Steve Bowler and crew in the SFP Brooker off South Head on Friday 28th:

Jamie Illistom has a frustrating one with selfish drivers parking in the ‘boat trailers only’ section, at his local ramp: 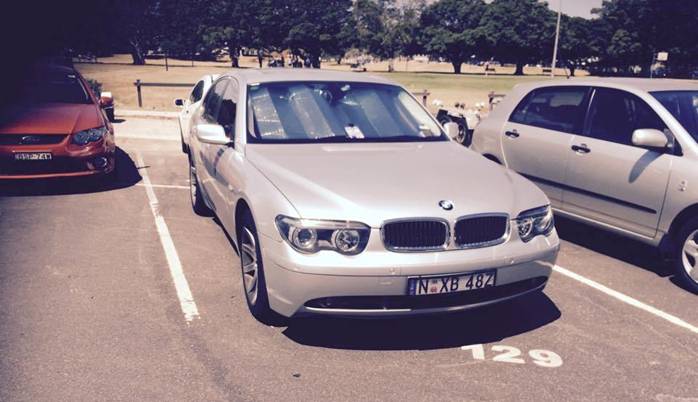 Rose bay boat ramp today. I had to park over 2k away and the ranger just said tough luck

Council reckons they can't do anything except book the people

Annoying! More about this problem later in the report. James and Dominic stopped by for a stack of gear Sunday 30th November. Here’s James’ neat Lewis centre console: 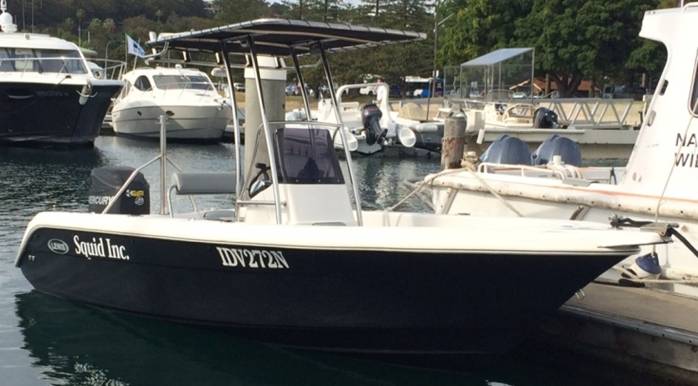 To politics, and anyone can make a mistake. But NSW Fisheries describing a mulloway as AUSTRALIANN SALMON in their  fisheries guide? No one finding the error, before hundreds of thousands of brochures were printed? Dylan Hannah writes: 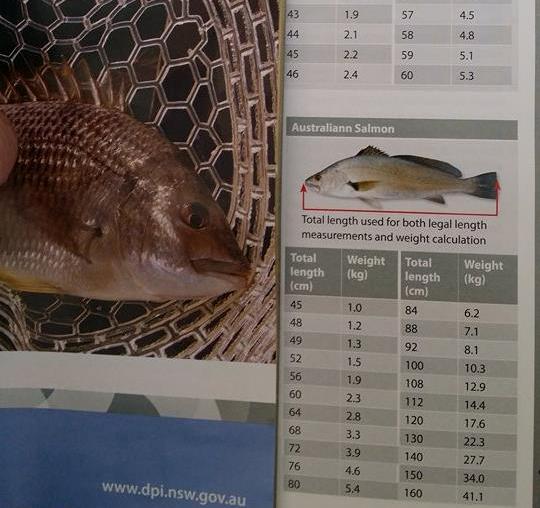 I thought you might find this amusing. The new fisheries guide. I wish the Australian salmon I caught looked like that. And I didnt know Australian was spelt like that either

Thanks, Dylan! More disgusted than amused. Fisheries have no sympathy for rec anglers mistakes so I don’t have much for theirs. And talking about Fisheries mistakes, Geoff Wilson sends an important update on the Point Lonsdale Pier outrage: 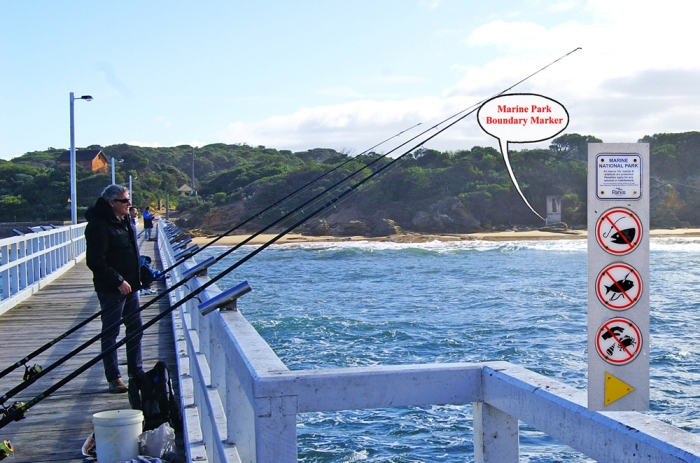 Why is this case so important? Because it represents a switch in Vic Fisheries policy from commonsense, to political correctness. There is no environmental benefit whatsoever in harassing and charging fishos whose lines drift more than 50 metres from the wharf. It’s about bullying and intimidation, no more and no less. Check this out: 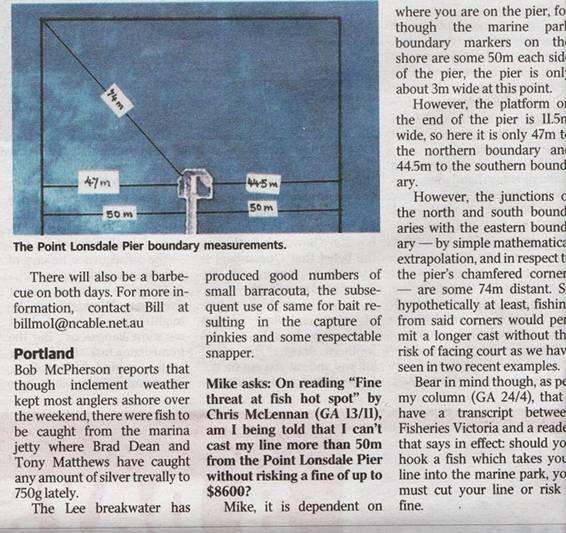 We’re now told that, if during the fight a fish crosses into the marine park, the angler should cut the line. Leaving the fish trailing hook, sinker and at least 50 metres of braid or mono. That’s crazy, but the craziness is part of a growing pattern. And to break the trend there’s only one option – using our votes to support whatever political party will support us. Not falling for last minute bribes like the Napthine government’s promise to ban pro fishing in Port Phillip Bay, or the avalanche of promises we can expect here in NSW ahead of the election next March. We have the numbers politically, and if we can use that power believe me, the pollies will take notice. Until next week and thanks so much to our readers and extra special thanks to those generous enough to contribute the pics and reports we all enjoy,