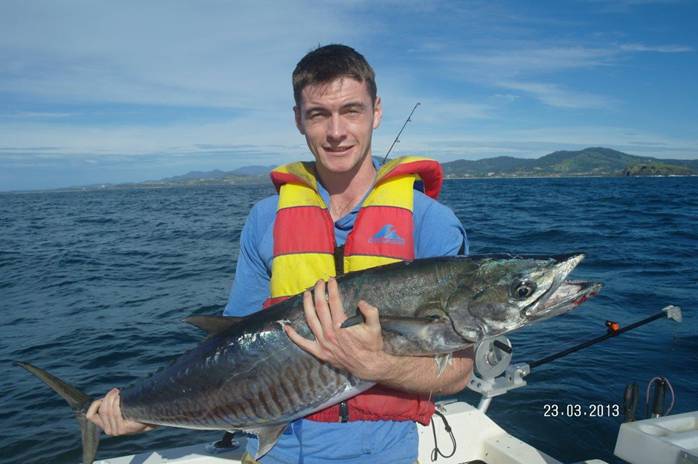 Andy, OK, plenty of kingfish make the report, third drop with your downrigger resulted in one 16kg Spanish for my son Nathan. Trolling two live slimeys on top and the one down seven meters did the trick. Good little gadget this downrigger thing. Location Coffs Harbour, of course.

This one’s pretty good too: 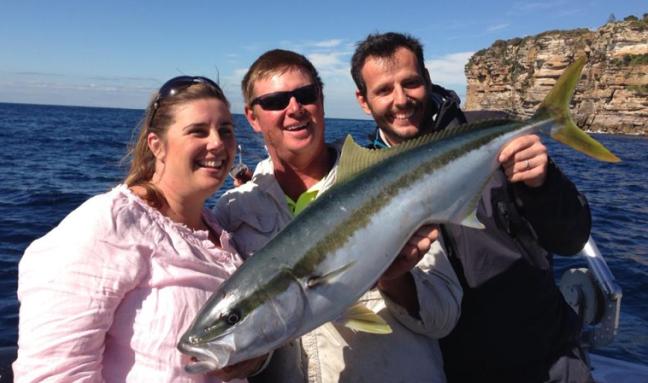 Matt Reid and Team Raptor Charters, fishing a hundred metres from us yesterday at South Head.

Even more impressive is this: 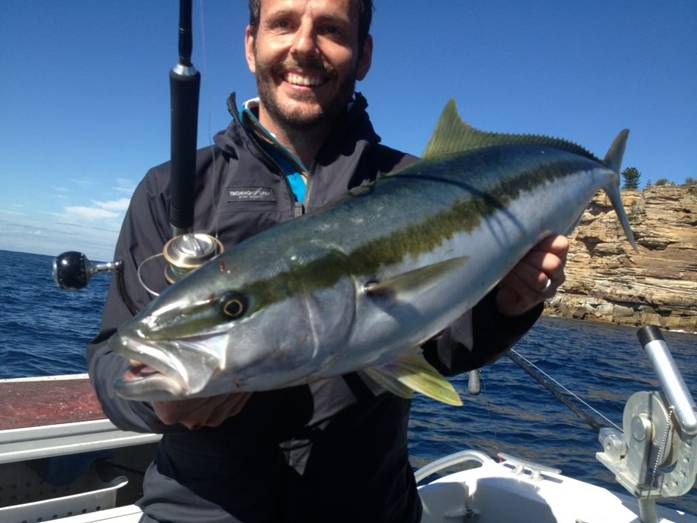 Five Downrigger Shop products in one pic, now THAT’S impressive. Shameless, too. J As to Team Carolyn Jane, we scored only two undersize kings on Tuesday. One off the downrigger, and one on jigs. Couldn’t understand what was jinxing us, then I spotted the popper Darryl brought aboard: 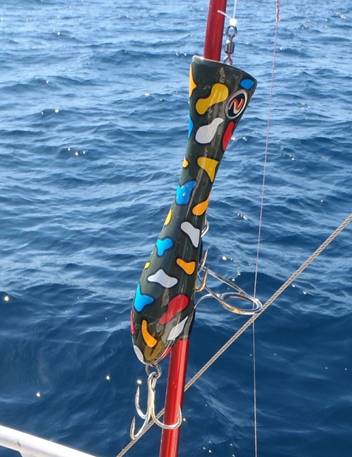 Yaaah, my eyes! Case closed, it was scaring every kingie from South Head to Allmark. As Ryan Hayes said on our Facebook page:

‘Something that flamboyant should only be seen at Oxford Street.’

Wise words Ryan, will pass them on. I had thought that part of his life was over, but obviously not. My humiliation continues with a report from Simon Milne, who was on the Harbour yesterday too: 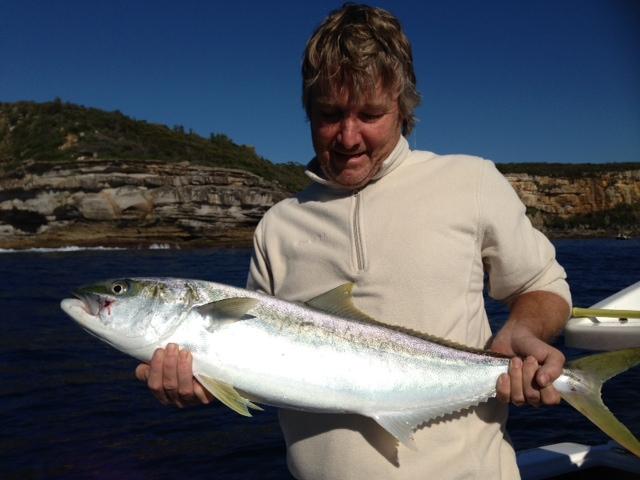 Thanks Andy.  We got an 86er on a squid … held by my mate John Oakes.   Wouldn't touch yakkas. Do you have another jig rod like the last one you sold me but perhaps a trifle stronger?   I broke my Samaki jig rod carelessly today.  Also would like to get a few jigs

Wow! Good one Simon. I’m just plain jealous, having a nightmare time finding a keeper at the moment. As to jig rods we have two six foot beauties, the Rapala Jig Day and the Ginro, from Korea. Both are $160. Ginro is a ripper, lighter action but still rated to PE 6, you can see it in action here on a one metre kingfish at Twelve Mile Reef late last year:

Note: we are not authorised Rapala dealers. J Short notice I know, but I’ll be at Warringah Anglers Club tomorrow night, talking about kingfish and how to catch them. Stop by and say hello? Lots of readers coming already, here’s the details:

Where: Time and Tide Hotel Dee Why (out the back in the covered area)

Game fishing has been hot and cold, with Freedom tagging 20 marlin off Little Island at Port Stephens last Wednesday: 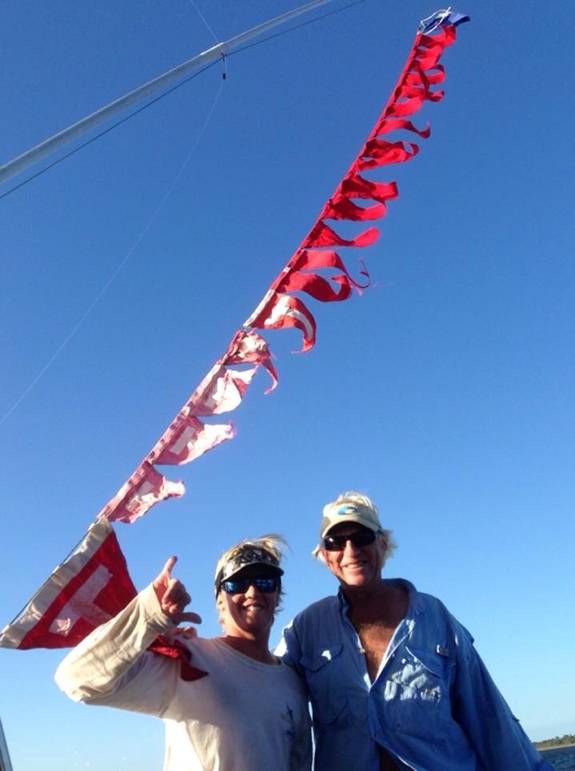 Makin’ the horns, that’s great. Not. Next day they were all gone, or so I’m told. Ross and Lew got into action a little further south: 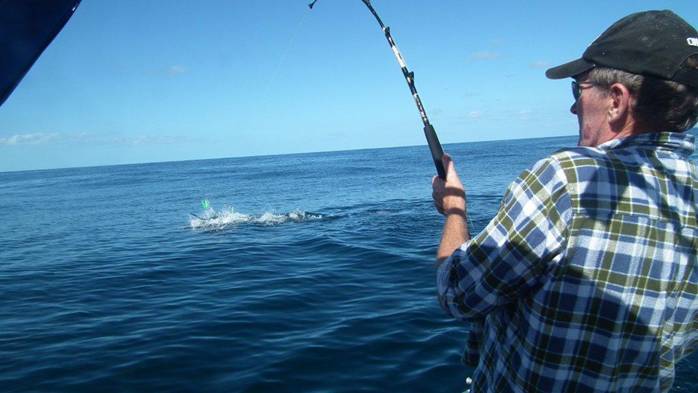 Didn`t see you at the canyons cobber, shame! 24.5 deg, tons of bait, macks n stripies. Hooked up in 70 on the way out there. 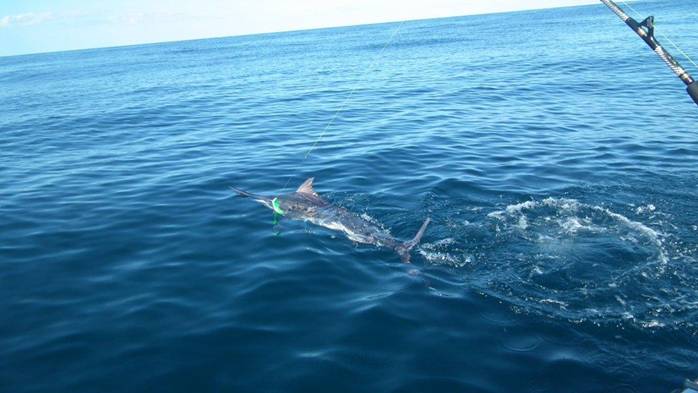 No mate I was fishing with my bride at the Wreck and the reef on Saturday. Pretty tough but we managed a couple of 65s, on jigs: 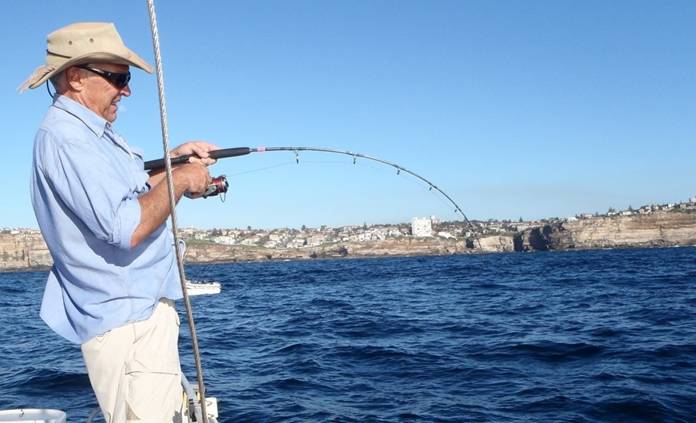 Peter CC was having his birthday on the water with his family, a beautiful day for it. Carolyn and I gratefully accepted his invitation to join the family at Clifton Gardens. When I arrived there was Scrat Rat, gently rocking at anchor.

I had no idea, but it turns out this area is a major stop over for the Sydney Harbour Walk. Hundreds - or more likely, thousands – of people walk along a foreshore track and pass through Clifton Gardens, whenever the weather suits. Some business genius has set up a tiny little café in a spot literally the size of a privy adjoining the naval base, on the northern side of the beach. It’s directly over the windscreen of Pete’s Haines, show above: 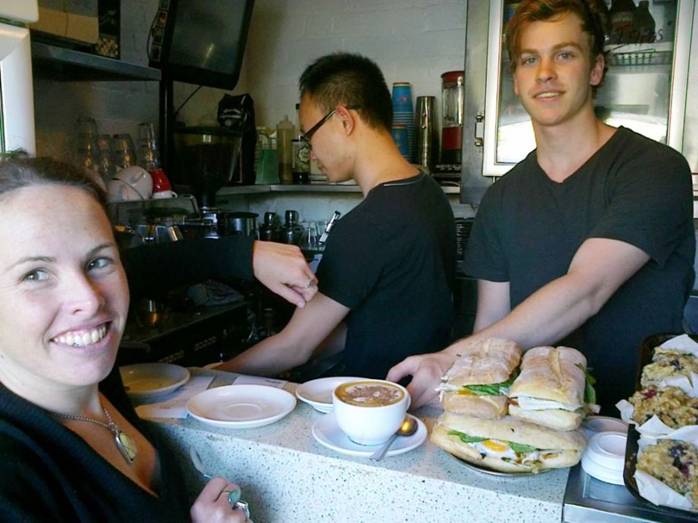 They do a mean ham and cheese croissant and cappuccino, although prices were what you would expect at a beach café, on a long weekend. After a beaut hour spent with Peter, Cathy, Ellen and their friends, we headed on back to the CJ:

What a great discovery this place is, and thanks to Peter for putting me on to it. If you’re looking to get the little lady on the water in Sydney, you could do a lot worse than this destination. If the kids are aboard there is a fantastic play area with clean toilets, and an ocean pool with shark nets for swimming. Someone who did way better jigging than my two just legals was Steve Jaques: 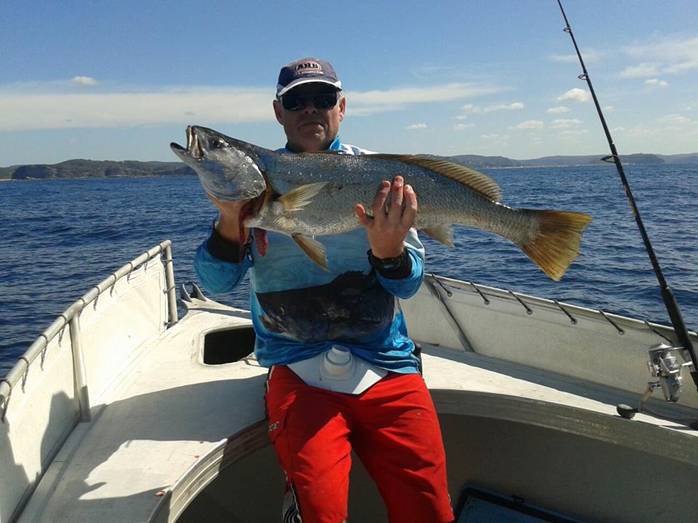 Hi Andy, here’s a jew i got while jigging  yesterday using one of your green/gold 250grm jigs… i didn’t even think of taking a photo with the jig in its mouth, as i was more interested in getting the jig down again as quickly as possible.

All understood champ, those priorities correct. David R working up a new fishery - sharking off a beach, inside the Harbour: 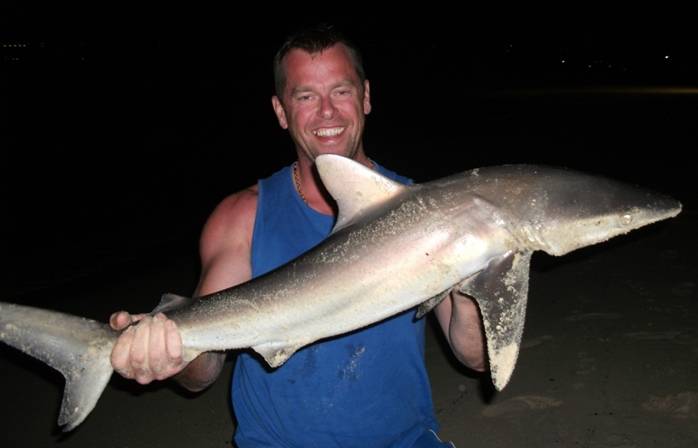 Andrew, attached some shark pics from my trip the other night - great fun on reasonably light gear……. I reckon you could find them on any of the harbour beaches. Happy to share the pics but would rather you didn't share the specific beach with everybody as it will turn into Pitt Street!

If I mentioned which beach, so many soy lattes would be spilled. Some nice words from Evan Hulme, on return from the Trailer Boat Tournament at Port Stephens:

Thought I would send you a quick email and let you know how we got on at the marks you gave me mate. We fished your marks on Friday and having never caught a marlin before I have to say I was stoked when a live yakka we had out the back of the boat for a king got hit by a marlin of about 50-60kgs hit the bait and jump about 20m from the back of the boat close enough to eyeball and see the bait in its mouth! Although it threw the hooks it's was very special for me none the less!  We got some small snapper and got busted up by some massive kings. Was still awesome fun Andy. Thanks again for your help and advice!

Always glad to help our regulars in any way possible, Evan! Angelo from JB Charters (at Jervis Bay, of course) brought a whole heap of happiness to the lads from Waverly Fishing Club: 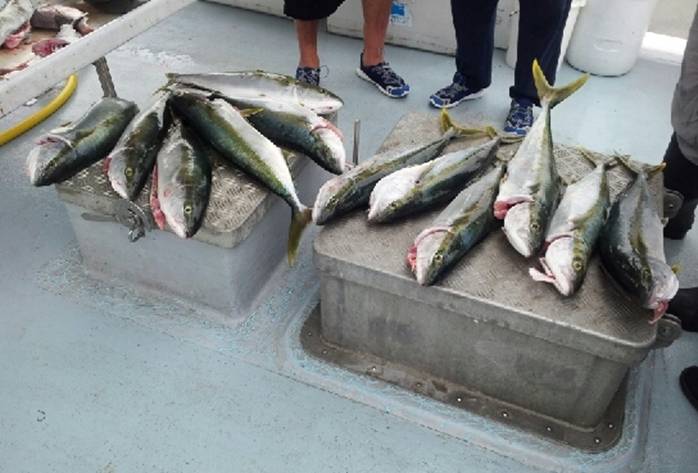 Hey Andrew, on the 22nd 23rd 24th and 25th of this month we took the boys from the Waverly fishing club out on the 4 day fishing binge. 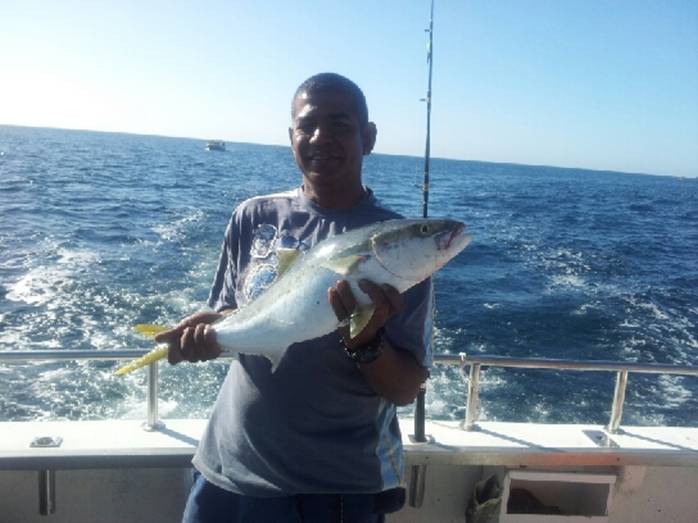 Fantastic, Angelo! What’s the story with the bloke at the back, with the orange specs? I’m guessing he’s got some crazy poppers. J David Clarke was down your way: 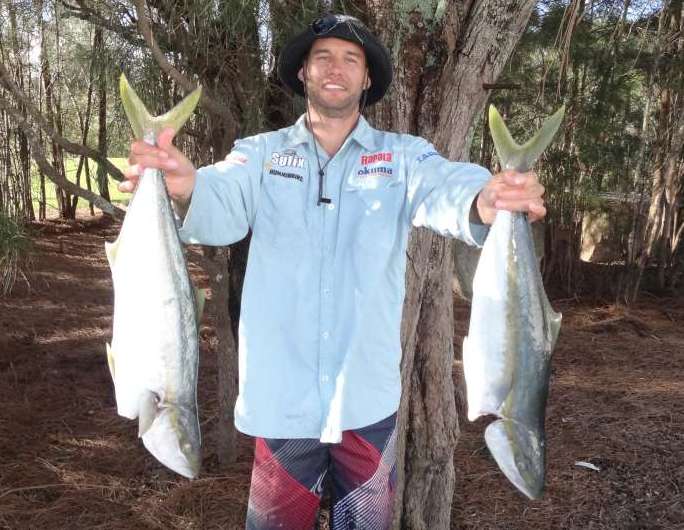 Just a quick report from Greenwell Point area…. two mates and I went out to try our luck today and although the conditions stopped us getting out wide, with plenty of good sized Yakkas in the bait tank we headed for some inshore reefs and found the Kingies to be plentiful. We landed and saw others land quite a few just below legal, and we ended up taking two 70cm kingies home….. Took a pic of mate with fish back at ramp.

Kingies in the scrub! You don’t see that every day. Thanks, Dave.  Andy Westlake lays down the law, for visitors to his tackle room: 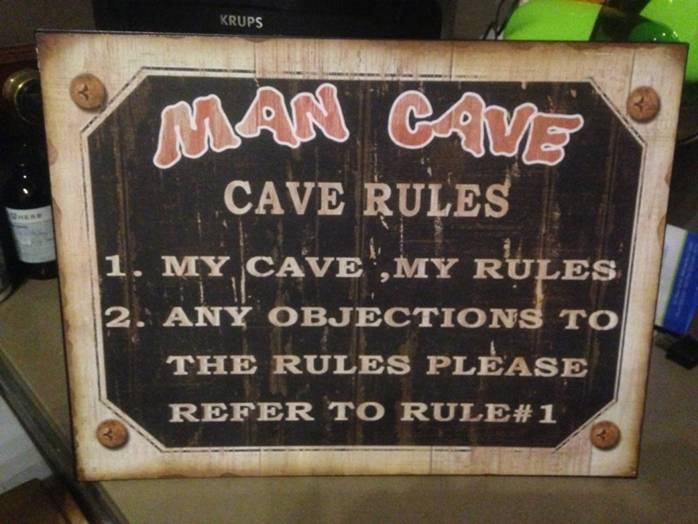 Dang right, Andy! And if the little lady doesn’t like it, she can TAKE A HIKE. Unless of course she doesn’t feel like walking, in which case I’ll drive her where she wants to go. After giving her all my money, that is. Now, where were we? Oh, yeah.  Trailer Boat Magazine runs a full page on our Head Start lures, in this months’ edition. Good on you, Jack: 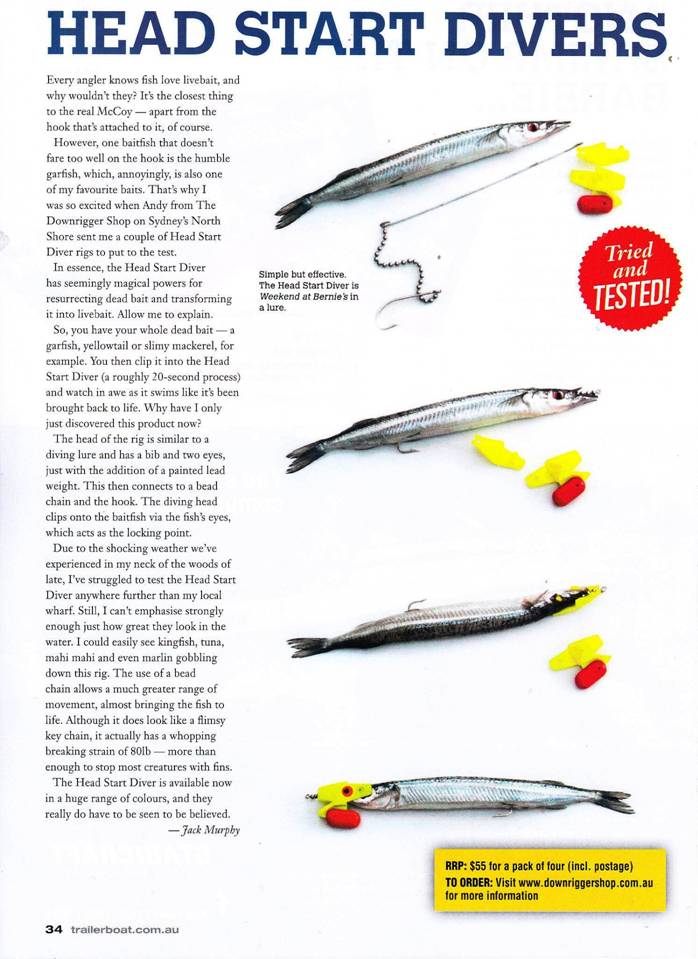 Glen Cadoo is the master of Moreton Bay cobia. This man not given to wordy discourse but he knows the Way of the Crab Eater: 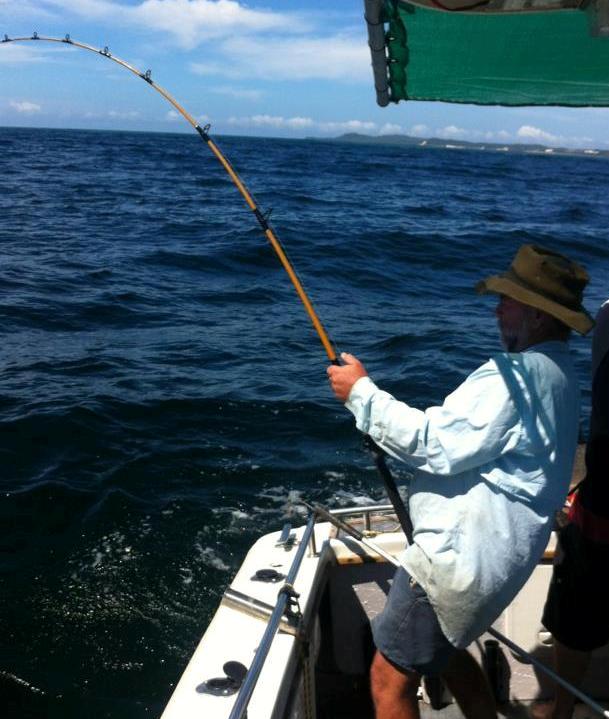 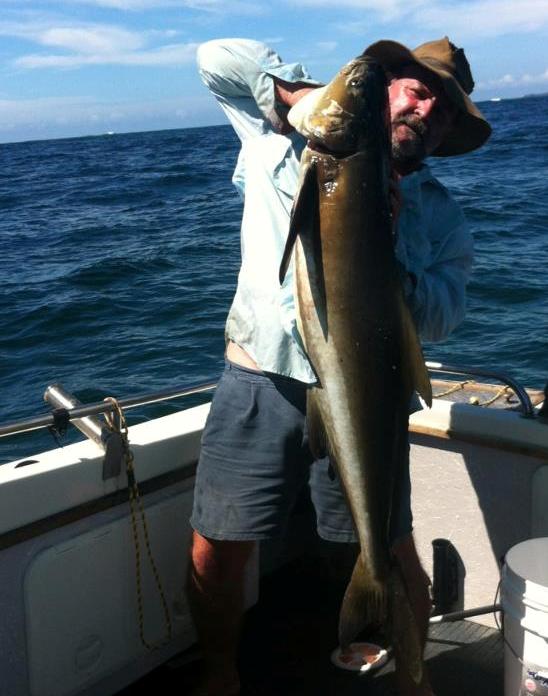 Gatesy, worried that our ball reel knobs would look a bit out of place on his orange Daiwa TD Sol. Turns out it looks pretty good: 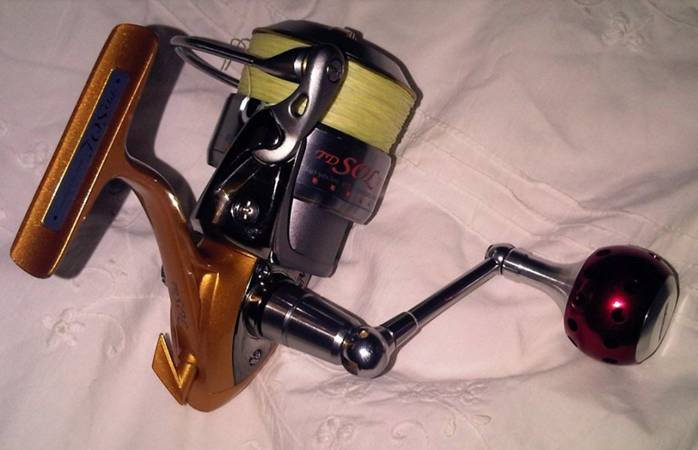 Attached is an image of the reel and I love it. The small knob is just sooooooo cute.

Mate, I could NOT go back, to the factory handle. Mark Way from Kiama Fishing Club always keeps us up-to-date, on important south coast news. Last weekend no exception, the Shoalhaven Open: 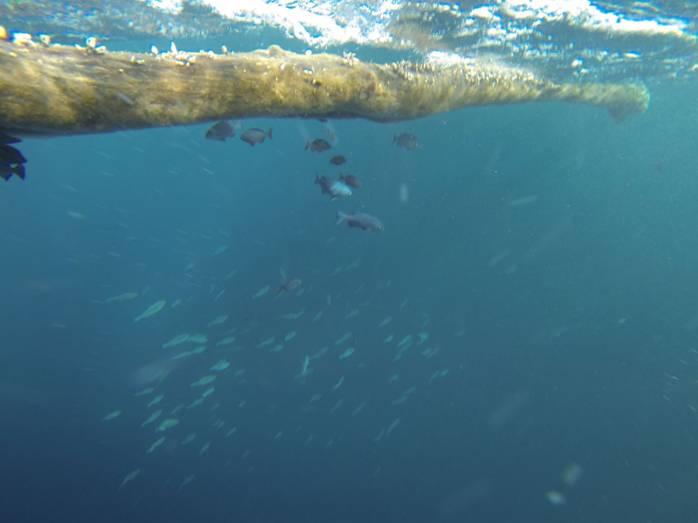 Whalers in Shoalhaven Open The water is still 24 deg but last weeks Shoalhaven Open featured Whaler sharks at the Banks with Club Boats El Bandito (Greg Barea) and Xiphias (Matt Nofferi) getting into the action. 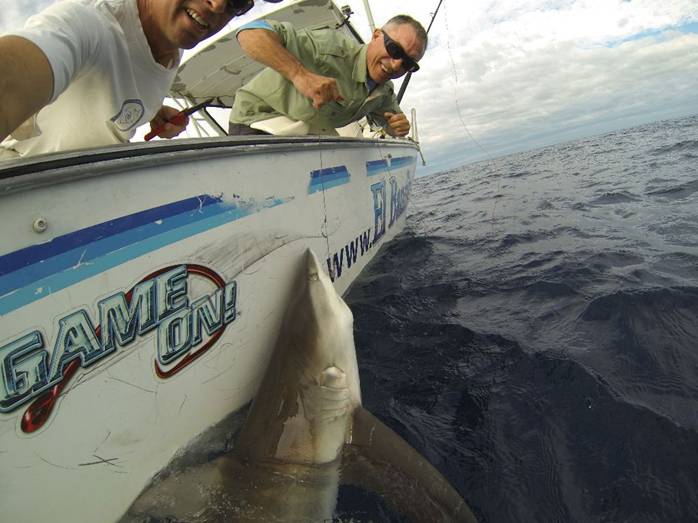 Xiphias just missed out winning Tag n Release by 1 Whaler shark! The lack of Marlin was quite surprising considering all the action up at Kiama the previous week? Heaviest shark was a 78.4kg Mako. 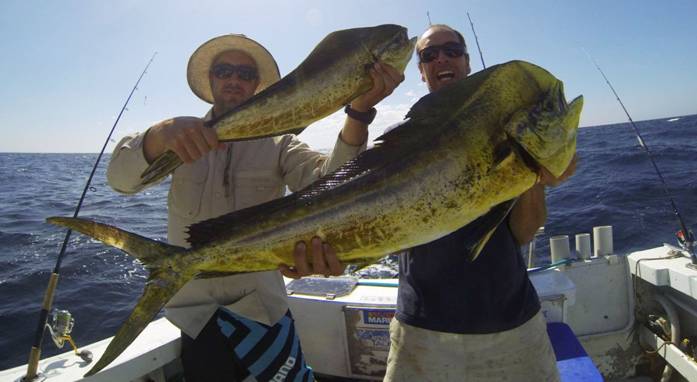 Greg reports there were Dollies out wider with a few Striped Tuna.

Wow. Look at those battle scars, on El Bandito. Les didn’t go wide, but what a result: 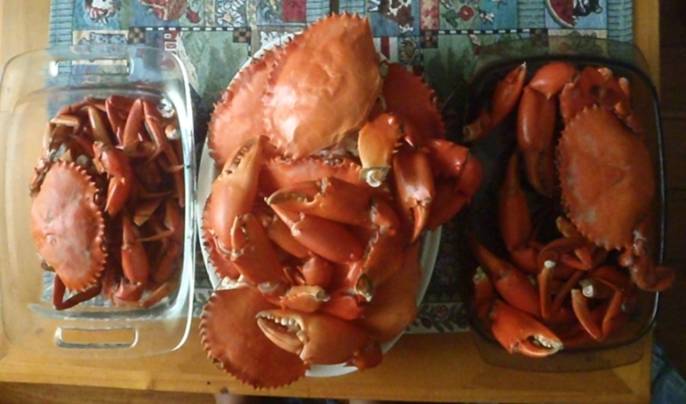 Hi Andrew, there's plenty of mud-crabs in the Macleay River. We went down river at 2.00 am and scored 12 crabs. 3 went back in the drink because they were borderline in size. Monday lunch was mud-crab, fresh local king prawns and washed down with a cold beer (or 2 or 3).

Dunno why Les, but I’m feeling an urge for seafood. Lots of seafood: 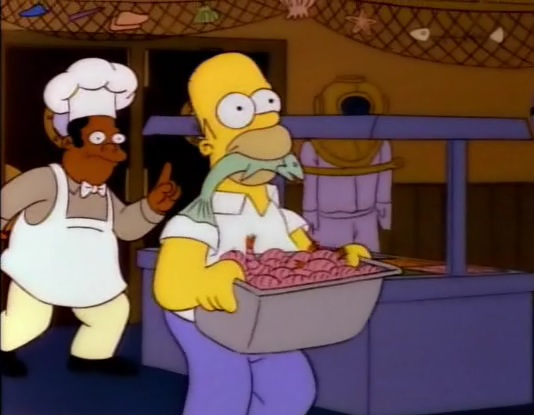 ‘That man ate our shrimp. And three plastic lobsters!’

Mark Way reminds me that the Blowhole Tournament is only ten days away: 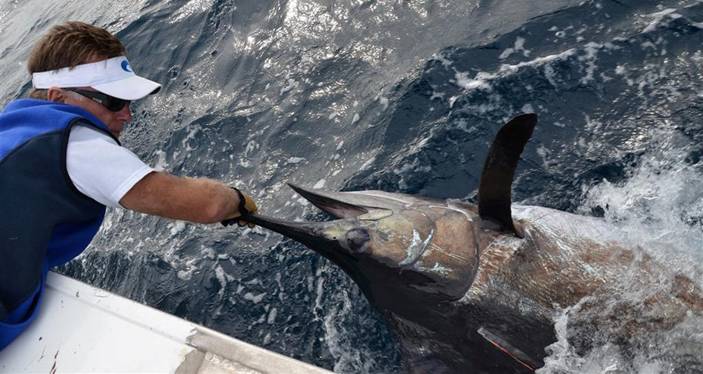 Kiama Leagues Club Blowhole Big Fish Classic entry forms are due by this Friday 5th April. Late entries will be accepted up to start of briefing with payment of an additional $90 cash per boat. Entries can be given to Secretary Faye at our April meeting, hand delivered to myself or posted to PO Box 447, Kiama 2533 by 5th April. Blue Marlin are off Kiama waiting for the Tournament! Keep it Reel Tagged & Released a 180-200kg Blue last Saturday.

Blue marlin. They really are the king of fish. Bruce Rayment says this is the weekend of the Sydney ANSA tournament: 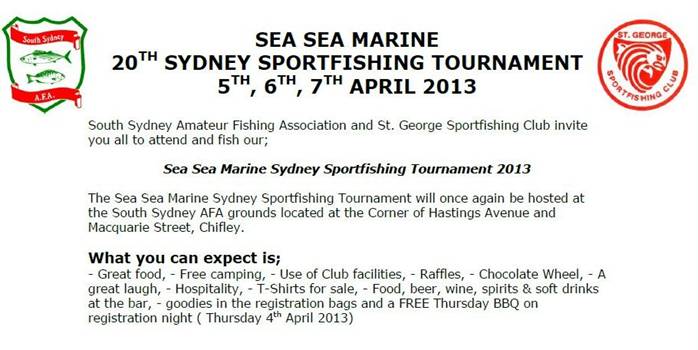 Good luck Bruce, and get me a pic or two. To politics, and Mick Tait says a new artificial reef was deployed this week in WA, specifically for rec anglers. Looks good! 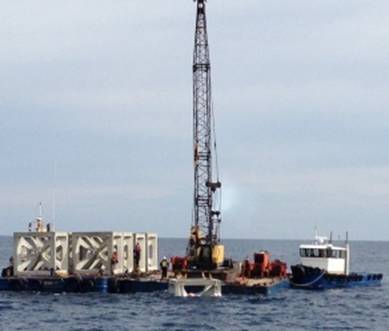 Thirty giant concrete modules. With the artificial reef off South Head producing so many kingfish now, why haven’t we got a few of these blocks off every port? We pay enough in fishing licenses to cover it. Heads up on a story next week about Blaxland boat ramp, in the Parramatta River:

If anyone has any insights to share on this or any other boat ramp ‘improvement’, let me know? Lastly, what a joy it was, to hear of Peter Phelps MLC’s speech in the NSW Parliament, back in September:

I wish to debunk one of the great political myths in Australian politics today: that The Greens are the party of young people. Nothing could be further from the truth. I refer to a report of Chris Harris regarding preselection for the Senate and note the demographic breakdown of The Greens NSW. Of those born in the 1940s, 1950s and 1960s, 1,227 are members of The Greens, yet of those born in the 1970s, 1980s and 1990s only 371 are members. The Greens do not have a youthful party; it has a party made up of disgruntled baby boomers, ex-communists who joined after their own communist visions failed, smelly hippies, crazy cat ladies in their later menopausal years, and moratorium marchers who went out in March 1971 and intellectually never came home. The symbol of The Greens is not a Prius, it is an EJ Holden.

Gold. Solid gold. And so true, check out this pic of Sydney greenies at the protest in Wahroonga Park last year: 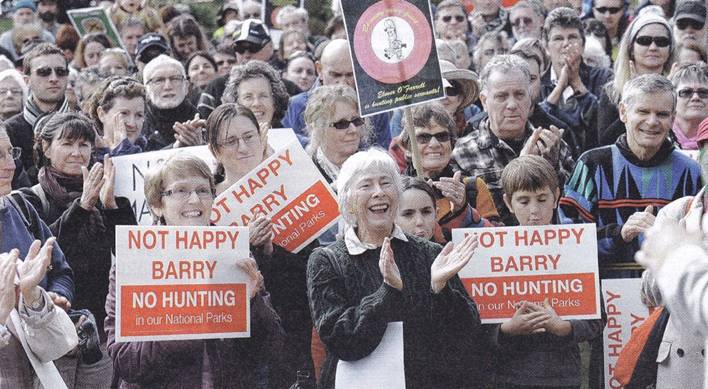 ‘Crazy cat ladies.’ Hoo yeah. Look at the kid on the right, ‘but Nanna, you said we were going to Luna Park.’

Until next week, thanks so much to our readers and especially, our contributors.