We start in WA, where Steve Sims headed 40 miles out with two of our big electric combos: 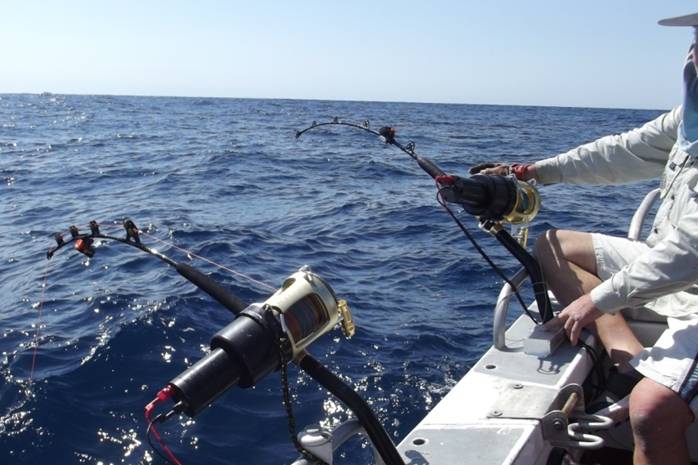 When the big Saltiga bends like that you know there’s something good coming up: 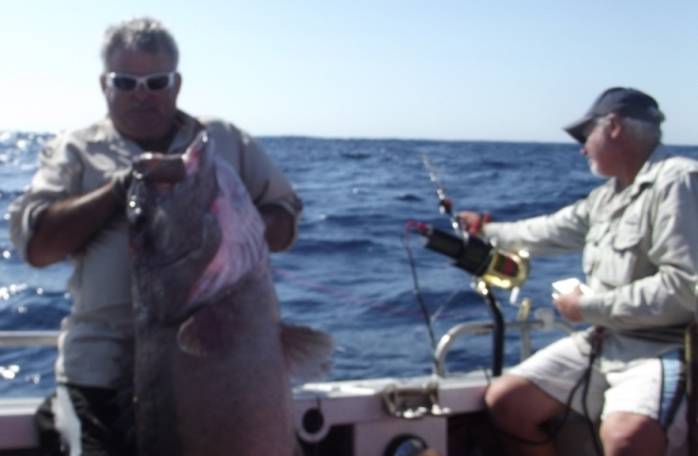 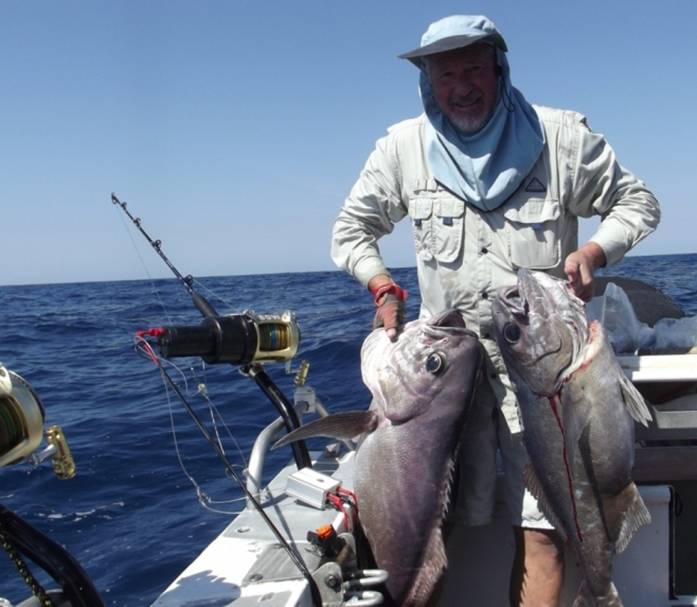 Well mate the good news on how well the reels are working, only surpassed by the fact that you sent this great report! Much appreciated. Way east Charles scored some nice blue eye cod on a charter and needs an electric reel combo: 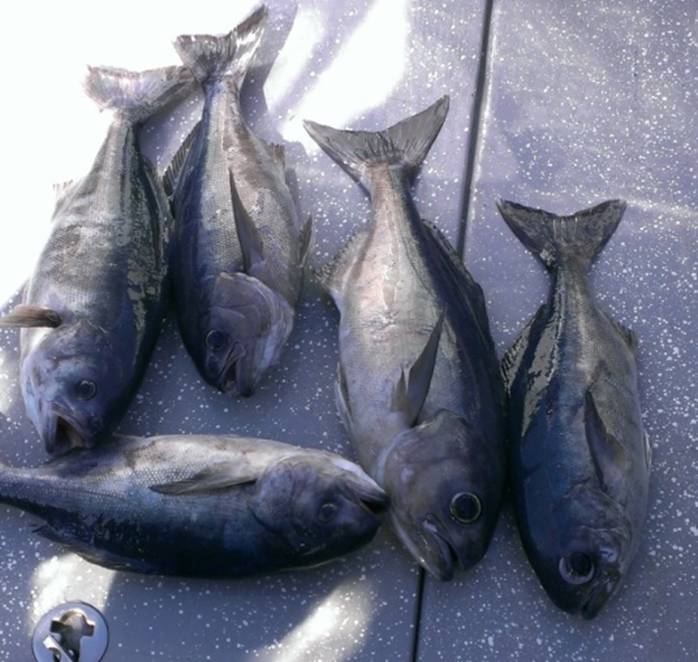 Thanks Andy, I cannot get over just how nice and good that blue eye was to eat. Got them off Portland in 500 metres. I will go with the package…..

I think you’ll be very pleased with it, Charles. We used our Tanacom combo on Tuesday at Brown’s Mountain: 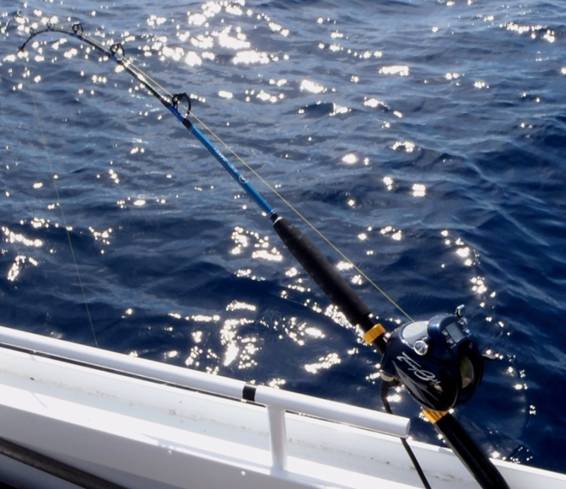 Nothing big boated, but some nice early season gemfish came aboard: 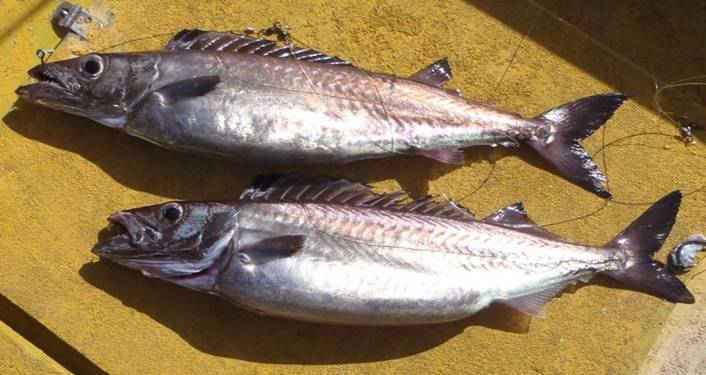 This one paid a shark tax on the way up: 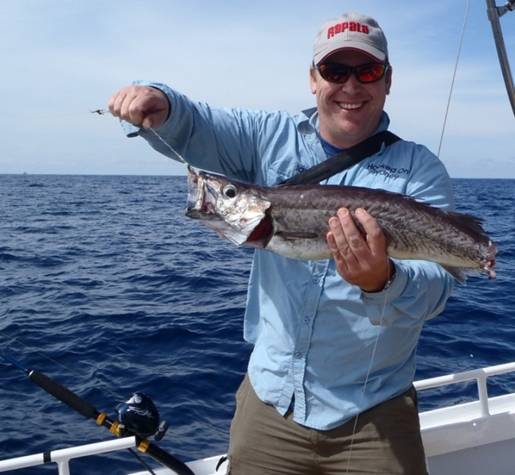 We found some nice mahi around a set of trap buoys on the way back in: 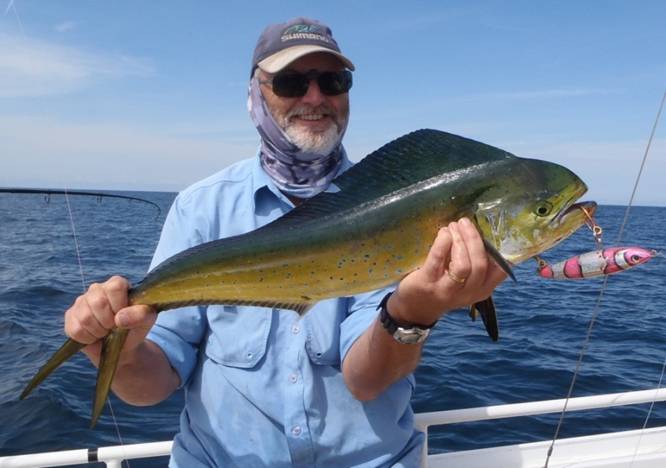 Nearer to home, and the marlin are still about. John Klapsis, on Sunday 30th: 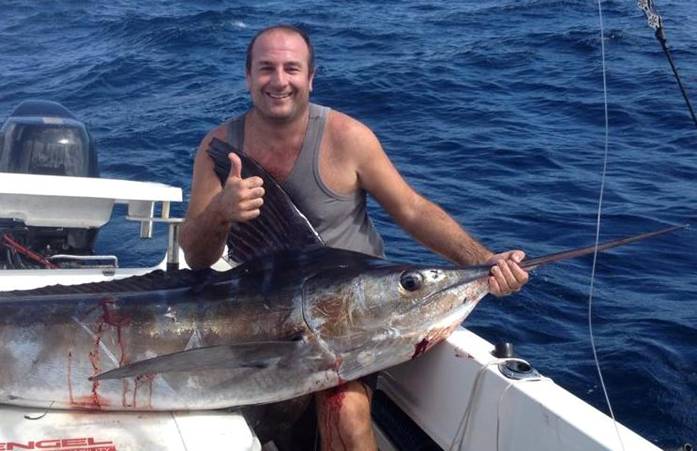 Hi Andy, today at NE of Browns .. funny day today, no birds, no bait (other than dollies ) green water, 23c. It's great knowing the trailer boats can mix it in with the big game boats!!!

Mate you’ve earned that one, sincere congratulations. Another good result for Jason Hotop on Sunday 30th: 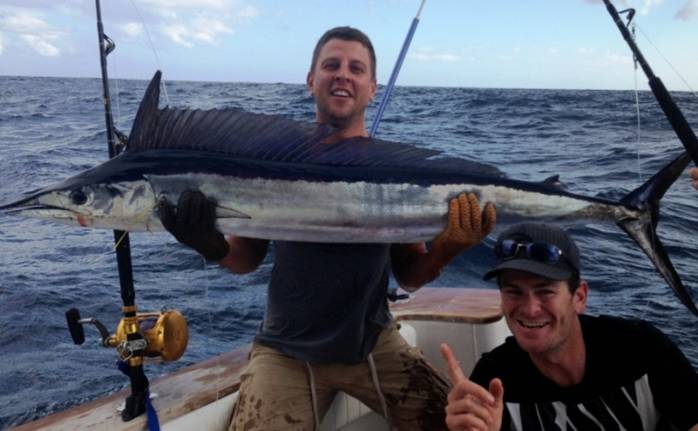 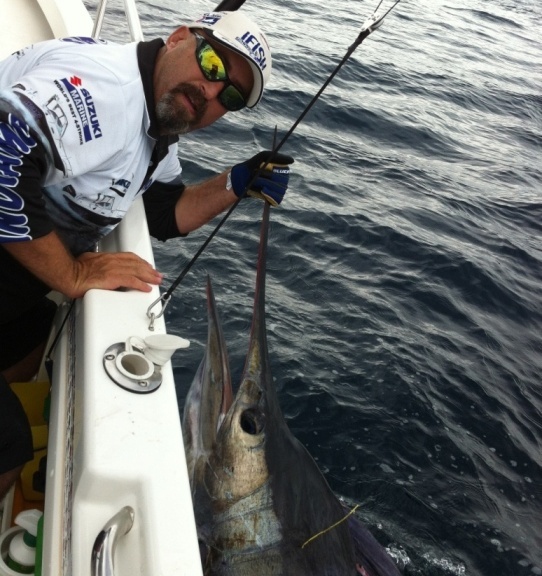 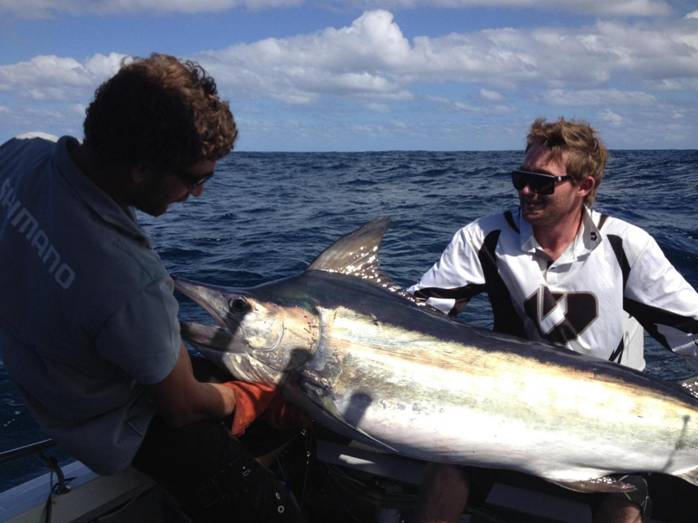 G`day mate, been a while! …. Lew finally cracked one. Sadly the hook broke in the bill and the second hook pinned it in the tail and it came up near dead, we tried to revive it, swimming it for 10 mins First trip out with his new 15 kg live fibre bent butt to boot! Saw 4 for the day. Saw a really nice fish out in 400 fathoms and 2 in the 80`s and a nice one in 60 on the way back in. Cheers n tight lines, Rossco

Don’t sweat it my friend, these things happen. One longliner will take more billfish in a few nights’ work than all the NSW trailerboat gamefishermen combined. And talking about trailer boat gamefishermen, how’s this story in the latest Tight Lines magazine? Bloke leaves his boat on the SGFC wharf at Watson’s Bay, while visiting the pub. Yakka blocks the overflow pipe in the live bait tank. Water spills out from the tank into the boat. Boat sinks: 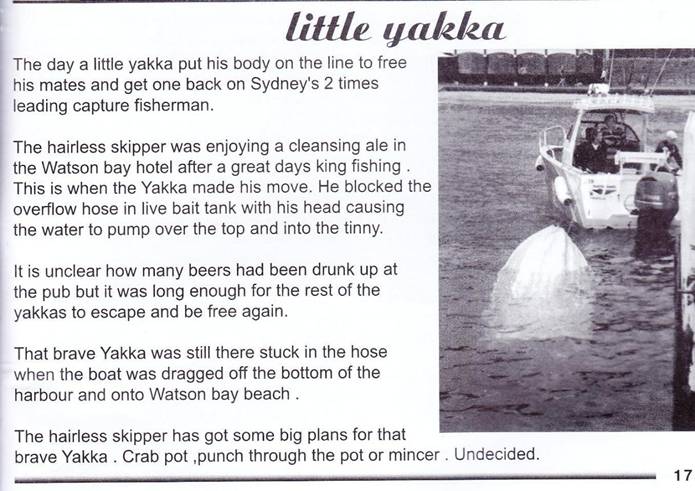 Good warning to us all. Mesh over the tank exit hose, if there’s any chance the overflow could end up inside the boat. Positive news from closer in too, with Josh Stuckey scoring an infrequent visitor this far south: 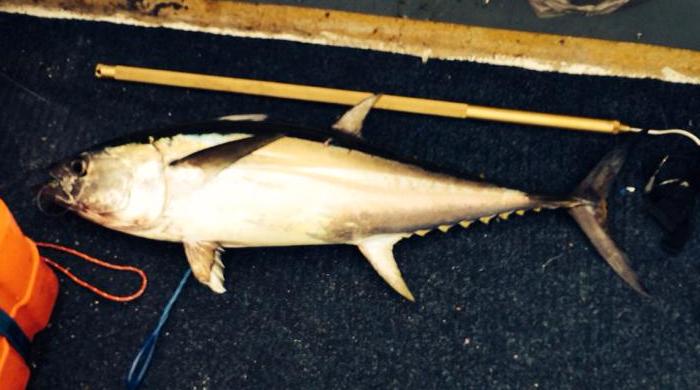 G'day Andy, went down rigging for kings this morning south of the Harbour but had no luck on them, smashed this longtail off a surface bait instead.

That’s a nice consolation prize, Josh! Jeremy Wardell got his lad onto a cracker Hawkesbury jew: 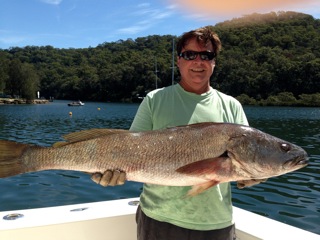 Hi Andrew, my son Marlon caught his first Jewie last Friday night at our lower Hawkesbury secret spot which we released after we both fought and landed this 15 kilo model first. Kind Regards, Jeremy 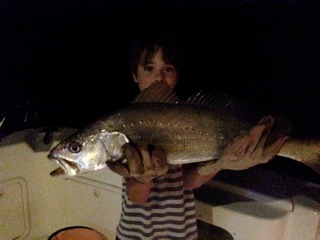 Well done Marlon! The really big news is the swarms of dolphin fish off central NSW. Paul Johnston got his sweet little daughter onto a nice one: 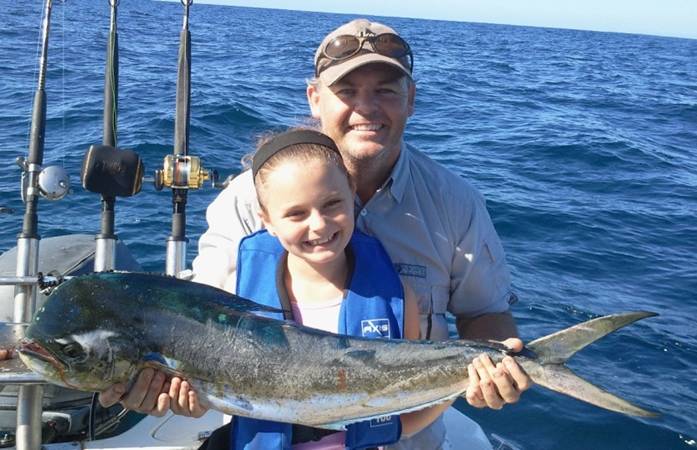 Andrew, Dolphin fish are still in good numbers up here off Crowdy Head with the FAD producing this nice 4.4kg fish for my daughter Sophie yesterday. We were the only boat there for nearly an hour so we got the best of the fish before they shut down. The fish were taking everything from livies, slab bait and jigs

Great! Troy out there too, we saw him on Tuesday: 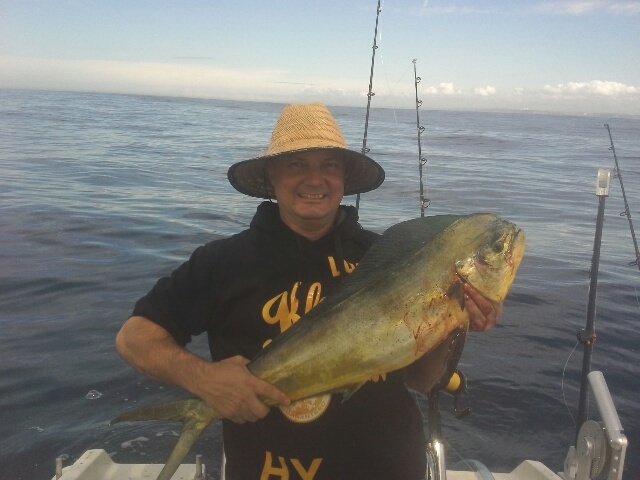 Hi Andrew,  how things change in a few short weeks. Went to Long Reef 2 weeks ago and were smashed with kingy's (60 - 63cm) lost a bomb but finally got to christened the downrigger (BTW thanks for the downrigger star drag modification it works a treat). Yesterday went back to Long reef hoping that they had grown but unfortunately no baitfish about and no Kingfish. So we went to the DPI FAD and seen the Carolyn Jane doing some drifts. Not much was happening there so ventured further to Greg Radford's marks. Thankfully, The place was swarming with Dolphinfish and it was feeding time.  Lots of littlies and lots of fun.  Ran out of bait and left smiling. First time dolly's for the brothers and landed a 1 meter model.  Thanks for the reports - Keep up the good work. Regards Troy

Will do, Troy! All I need is for helpful fishos like you to keep sending these great reports. Yep, we headed out that day too, fired up by reports of mahi on the FADs and buoys, and encouraged by an excellent forecast. It was on, not big fish but stacks of them: 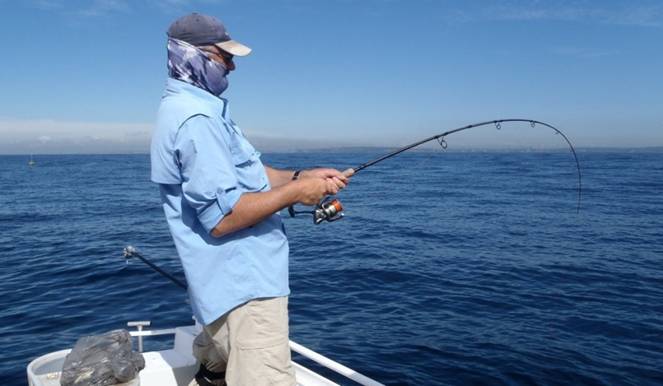 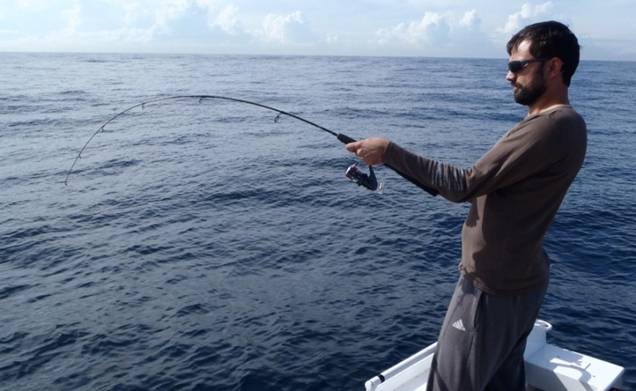 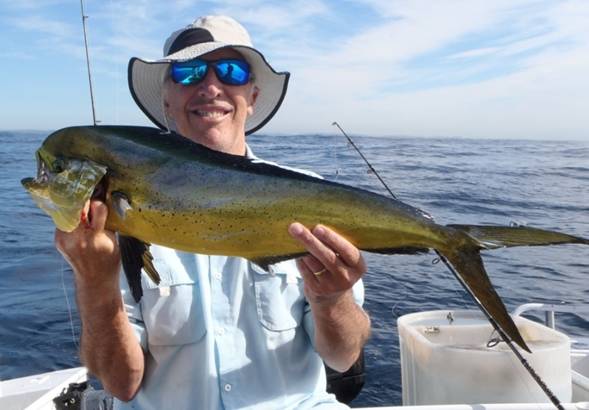 A couple of weeks ago I bought a Spongebob closed face combo at ALDI – mainly as a laugh for our readers on the Facebook page. That somehow turned into me promising to fish it offshore. So a light jig head and pilchard tail as bait. The hook up was immediate: 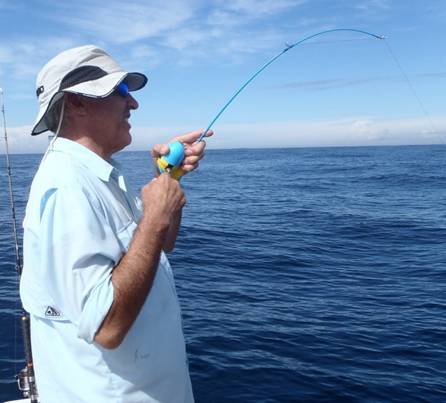 Not much smaller than the rod:

Back in we went, with a quick stop at the Artificial in the hope the kingies might have returned. They had: 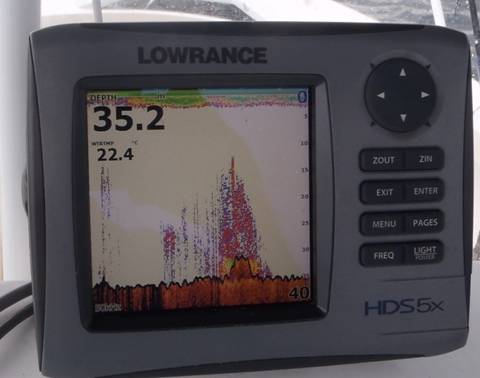 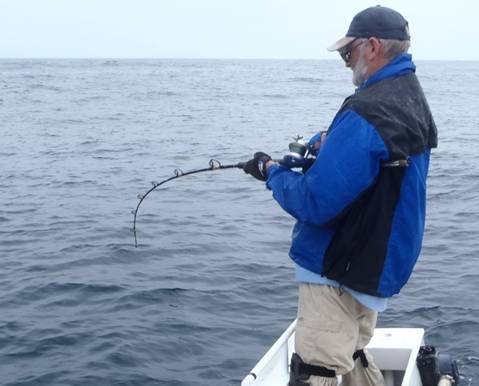 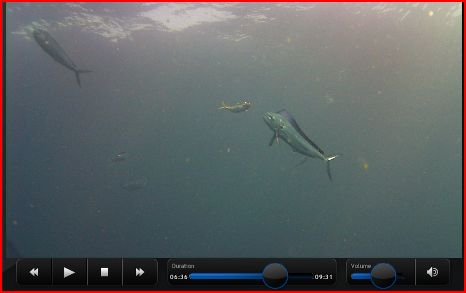 Overseas, and Sean requests a favour for a friend. I hear so many good things about this place: 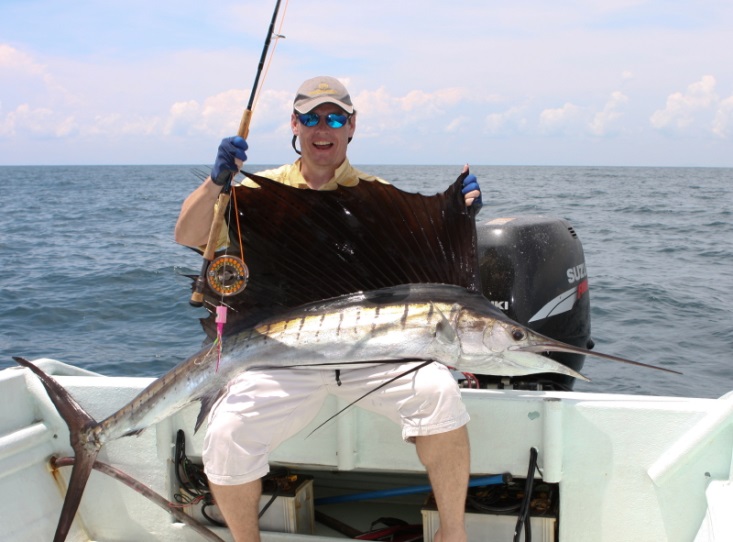 I know we spoke about fishing in Rompin on more than one occasion. I fished there close to twenty times during my time in Singapore, finally finding a great guide. He and I have kept in contact since, and now that the monsoon is finishing he's looking to get the season rolling and some bookings happening. Wondering if you could give him a plug in your newsletter; I've got no vested interest except for saying he's a top bloke and it's an incredible place for sails, and a great opportunity to get one on fly! A seven day six night trip, fishing five days is only SGD2100 (approx AUD1875) per person based on four anglers per boat twin share accommodation. Price includes all accom, fishing gear, meals and transport ex-Singapore. Dominic's contact details: Email: info@fishzone.com.sg Tel: +65 9027 6972 www.fishzone.com.sg

To politics, and the Coffs Harbour (or should that be, Coffin Harbour) boat ramp issue went ballistic this week. Firstly, the owner of the boat shown in last week’s report wrote to me: 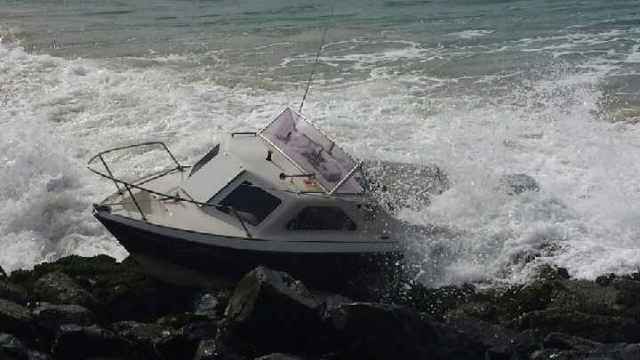 Hi mate, just listened to your audio file regarding Coffs ramp. Well said! Here's a few more pics of my boat Big Red from the 15th. A shame she is a total write off but lucky no injuries. It’s another warning shot for the council. How many chances do they think they have before they see a fatality here? 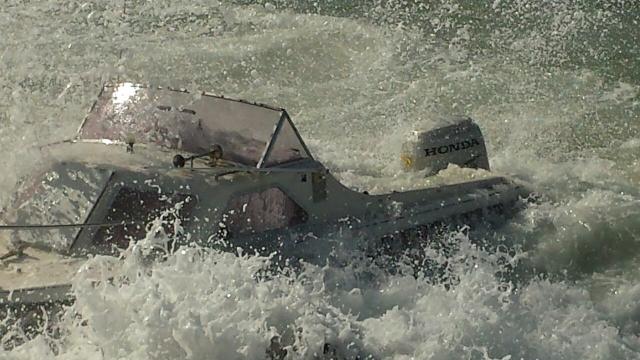 Good question, champ. If there’s a tragedy at the ramp we’ll be naming names. I’m collating a Web page on this whole sorry affair. Emil wrote to the Coffs Harbour Chamber of Commerce demanding remedial action over the Widowmaker boat ramp. He raises a good point. If it was a private business advertising themselves as a boating wonderland, when the reality is a boating apocalypse, they’d end up being charged by Consumer Affairs:

It is with some irony that I notice on various publications and advertising campaigns that Coffs Harbour continues to promote itself as a paradise for the small boat fisherman. The Coffs Harbour area for offshore fishing is currently serviced by the boat ramp in the harbour itself which quite frankly is in a disgraceful state. My family and I typically holiday on the mid north coast 2-3 times a year and because of the importance of fishing to my family we typically choose a place that has good sea access and good offshore fishing. On our holidays we would typically spend $5-6000 per week on accommodation, fuel, eating out , fishing tackle etc. I would be one of tens of thousands of recreational fisherman that travel up and down the NSW coast spending that sort of money directly into local communities. Coffs Harbour has traditionally been high on our list of preferred places to visit but with the high number of Sanctuary Zones brought in by the Marine Park and the current state of the boat ramp at Coffs harbour we will not be returning any time soon.

Well said, Emil. But the issue really hit warp speed when local fisho and spearo Brett Vercoe posted a short video showing the mishaps there in just one hour, last weekend. You have *got* to see this:

Readers on our Facebook page went ballistic, over 3600 views and twenty comments. This has got to be costing Coffs tourism a lot of money. Jason:

Was looking at fishing a couple of tournaments this year at Coffs, taking the family and crew/boat up for roughly a week each comp , NOT NOW ! what a disgrace that is.

I fished the heavy tackle comp on the weekend and it was dreadful. I'm in a 5 1/4 metre tinnie. With the leg up and just in the water still hit bottom. Not fishing in comp till it's fixed

There's was a heavy tackle comp held in Coffs on the weekend. We planned on driving down there and staying a few days. After checking out a few reports on how bad the boat ramp is, there was no way that road trip would eventuate

With fishos risking their lives and boats just to get out on the water what’s Duncan Gay – the NSW Maritime Minister, ultimately responsible for this stuff up – doing? Printing more pamphlets stating the obvious, that’s what: 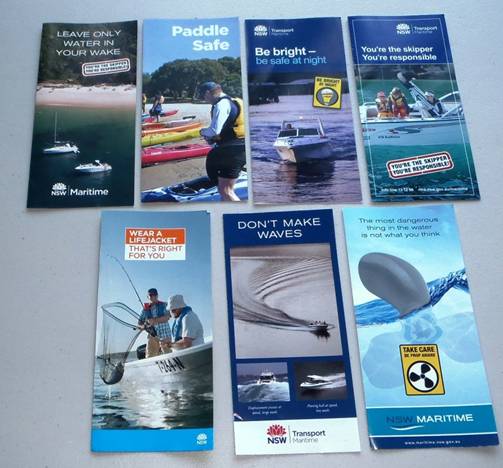 . This rubbish would have cost taxpayers hundreds of thousands in consultancy and advertising agency fees. The good news is that the boat ramp disaster footage aired on Channel 9 News Wednesday night and – knowing how sensitive this government is to negative media coverage – I’m betting remedial action is in the works. We’ll stay right on it and keep you posted, because the sad truth is that Coffs Harbour ramp is the tip of the iceberg, when it comes to neglected and dangerous boating infrastructure in this State. Thanks to all our readers and double special extra thanks to those considerate enough to send in the pics and reports we all enjoy reading. Until next week,