With the holidays in full swing, clients and friends are spread up and down the coast. Sean is at South West Rocks: 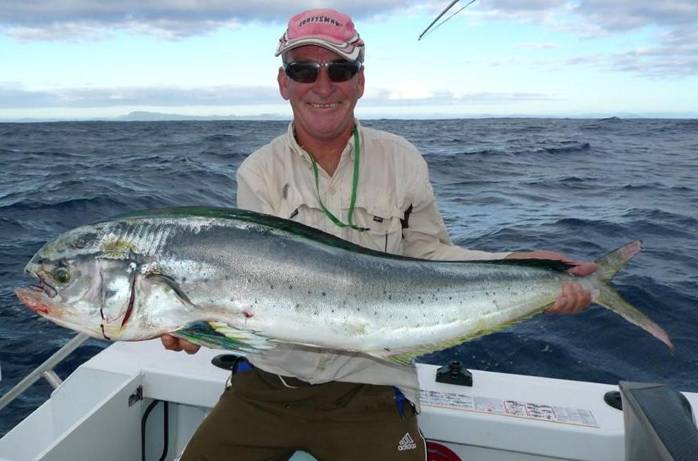 Terry with a good 9kg dolphin fish. The smaller ones have been in plague proportions around the FAD, with the occasional bigger model like this cow. 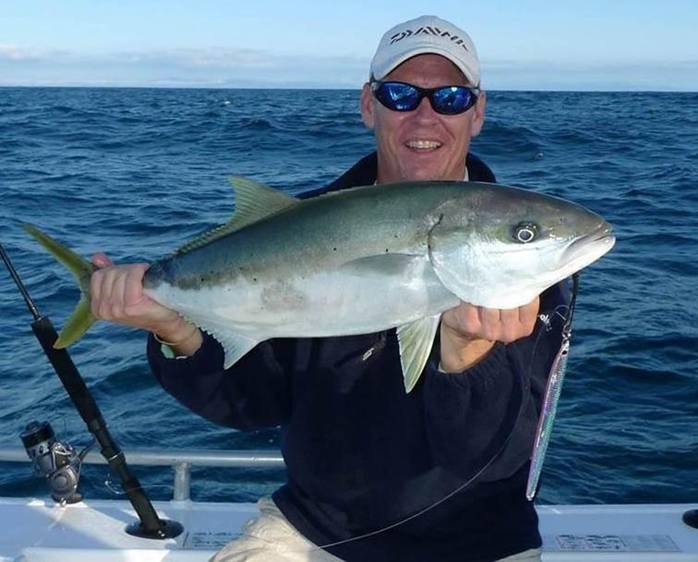 A nice kingie on the jig to break in the new Van Staal (a little Christmas present to myself!) 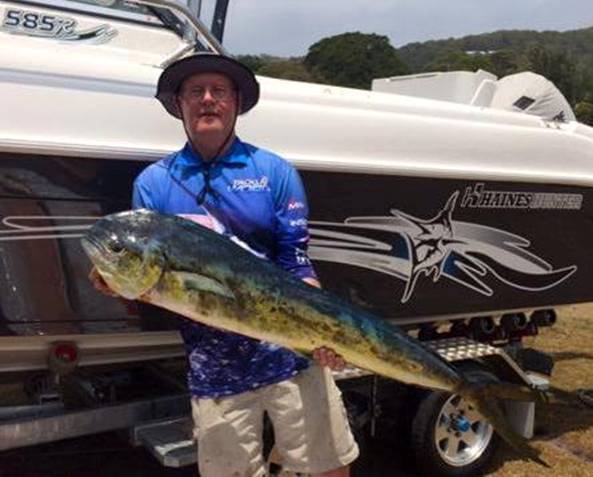 Nice! John Klapsis headed south of Sydney. Scored some nice reds for himself: 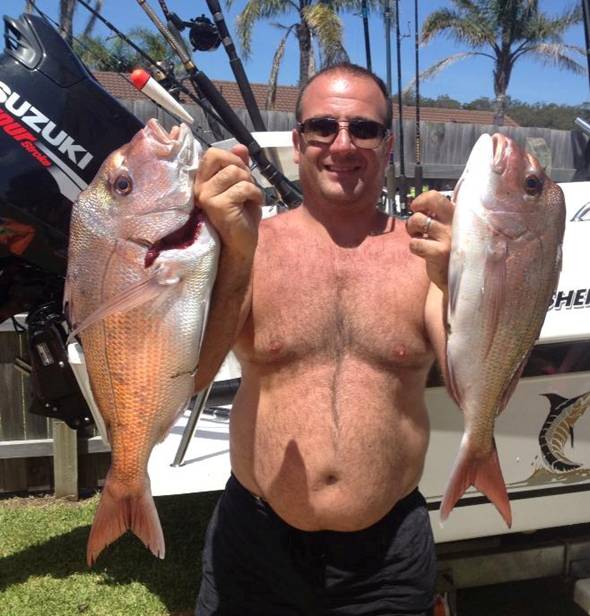 71cm and 56cm snapper. Landed 6 in total for 2 hours of fishing in 20m of water at Batemans Bay / Yellow Rock

then backed up with the son and heir: 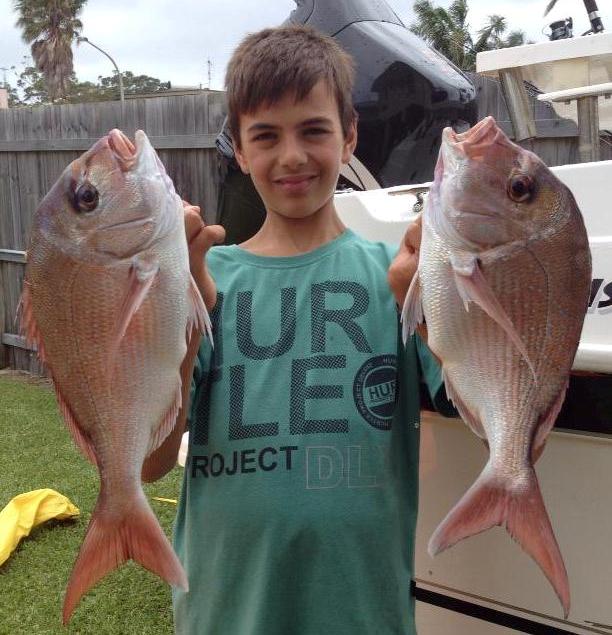 Got em again Andy. In 2 hours before the wind picked up.

Good one, ol’ buddy. Bruce Rayment delivering nature’s bounty, looks like what they called ‘seafood basket’ in the old days: 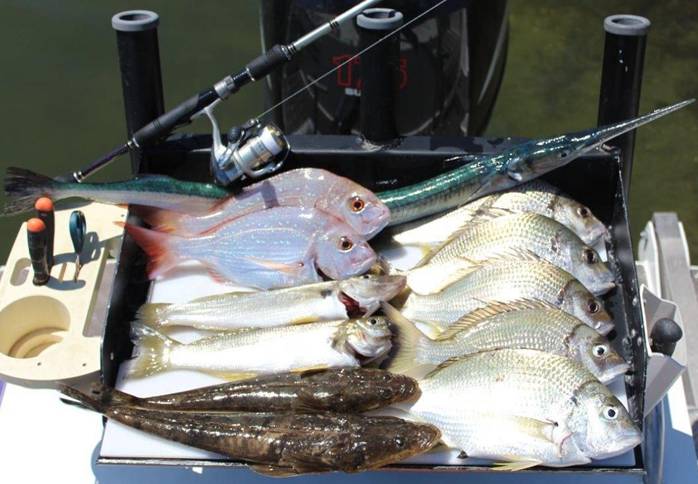 Just back from a week at my parents place in Sussex Inlet. Can't beat having both your boats tied up at a wharf 10m from your back door! A number of notable things - Eldest son James skippering our small boat Beakie on his own for the first time and scoring his first fish solo amongst them. A major milestone for a young man. 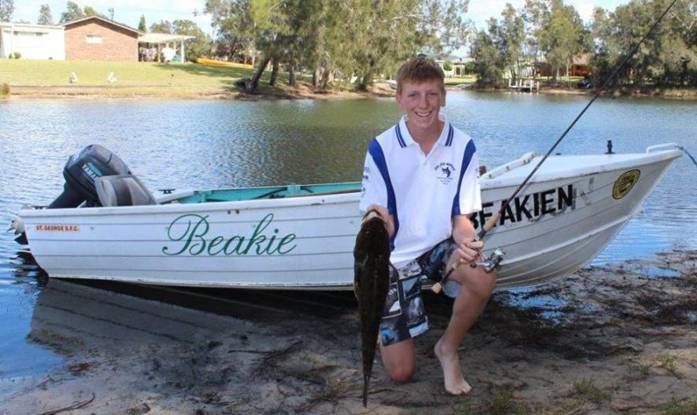 After spending plenty of time in the past year fishing offshore it was really nice to be tossing lures around St.Georges Basin at dawn. James reset for the third or fourth time the ANSA Junior National Lurecasting Record for Flathead on 1kg, upping the mark to 2.01kg. This is the largest flathead we would keep. My father Don took one of the few ANSA National Records I held with a Long Tom of 870mm.

Thanks Bruce! Glenn went to Hervey Bay, which is an all time hot spot – if you can crack the code there. Glenn’s one who can: 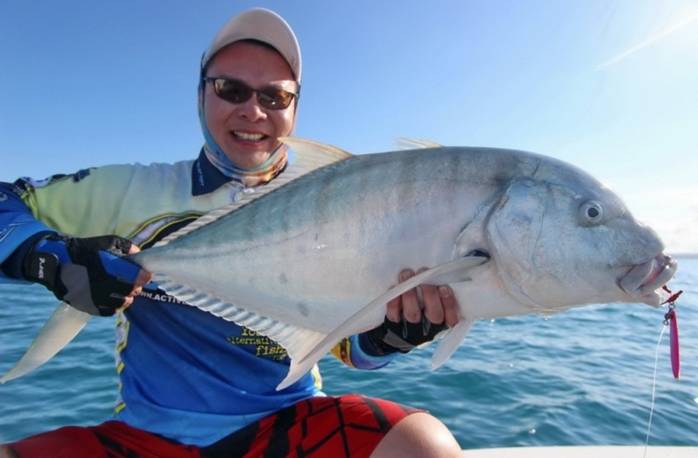 G'day Andrew, hope you have been enjoying a great Xmas holiday so far. I am going to need more micro jigs from you now because they worked SO well for me over the past weekend fishing in Hervey Bay.  Mackerel love them and I got bitten off so many times that I wish I had placed a bigger order from you. 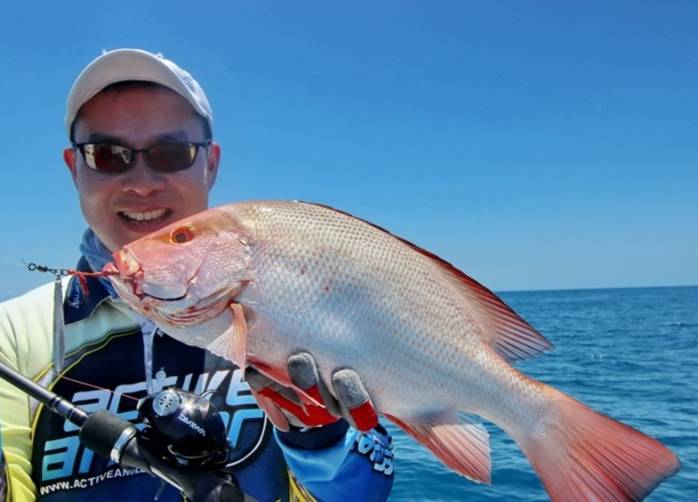 My guide for the day was Andrew Chorley from Hervey Bay Fly and Sportfishing.  Have been out with him numerous times and in my opinion, he is THE man to call if you ever want to fish the beautiful Hervey Bay.  His work antics and knowledge will get you onto many good fish and experiences that will be remembered for a very long time.

I have attached some photos of fish caught on the same pink 40g jig before I lost it to a hungry mackerel (very upsetting when i did!).  Gear used were Daiwa Zillion Type R paired with a TD Zillion (US Version) 12-20lb running 15lb braid with 30lb leader.  I kept the same terminals to make my own double assist hooks  and it worked very well.

That’s great Glenn, and typically generous of you to credit your guide in that way. Micro jigs still just $35 for ten, including delivery: 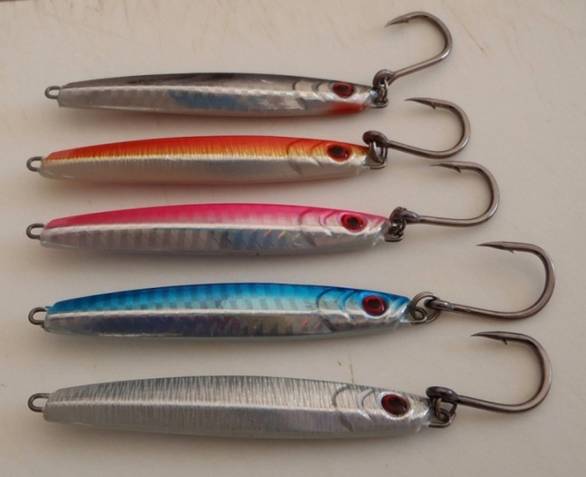 Just call or email me if you’d like to order? Back home, and those who couldn’t get away haven’t been twiddling their thumbs.

Dave Vassallo fished out of Sydney:

That’s a beauty, Dave. Matt Sidey had some minor issues with his downrigger. All good now: 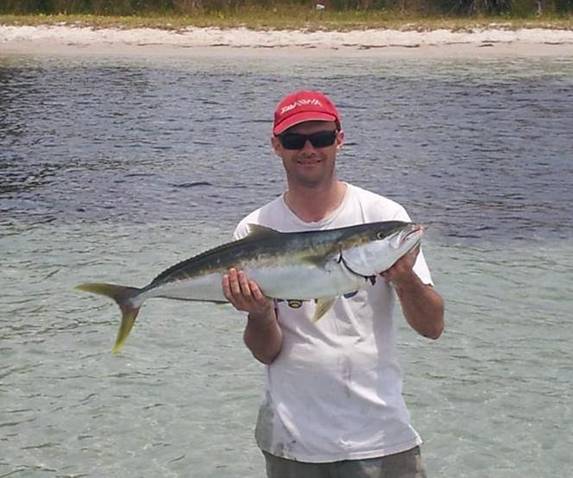 Glad it all came together, Matt. Hard fishing Mitchell scored a good one off Sydney: 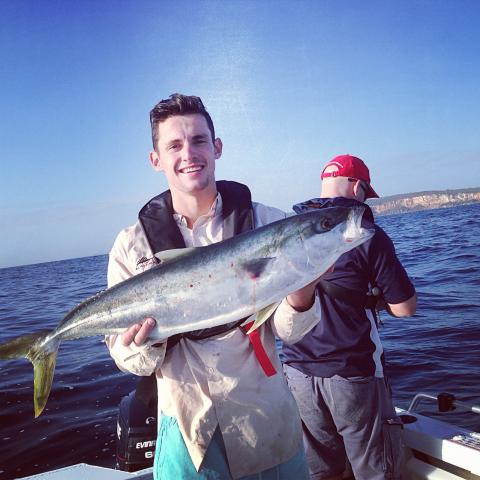 Healthy start to the mornin. Jigged this 90

Excellent, Mitch. Keen to get out this week and try to duplicate your success. He backed up with a mate a couple of days later, this time finding the samsonfish: 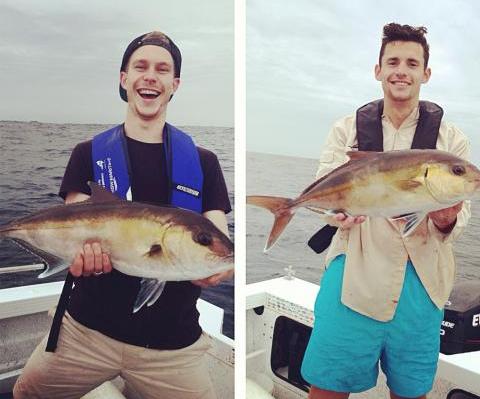 Ducked out for a quick sesh this morning. What a run. over 20 sambos and 2 big ones

Adam K took a visitor out on Sydney Harbour. Magnificent! The kingfish a beauty, too: 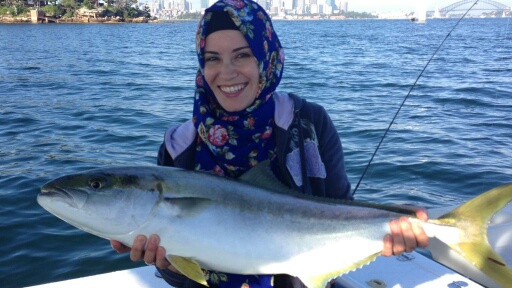 Hi Andy, my niece & her husband are up from Melbourne & wanted to fish.  Took them out to Sydney Harbour today. After a lesson in squidding headed straight to my regular haunts.  Landed 3 fish from 5 squid - 91cm, 88cm & 71cm.  Dropped 2 monsters just couldn't turn their heads around.  Off the water by 9:30 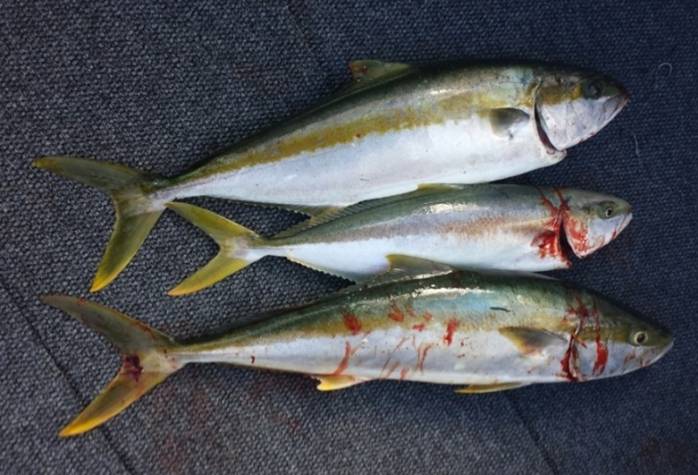 Well done mate, I am not hearing a lot of kingfish reports considering how many fishos are out there. That could change in a heartbeat of course. One place good kings do roam is of course Lord Howe Island. Which is where Adam Tsipris went for the break: 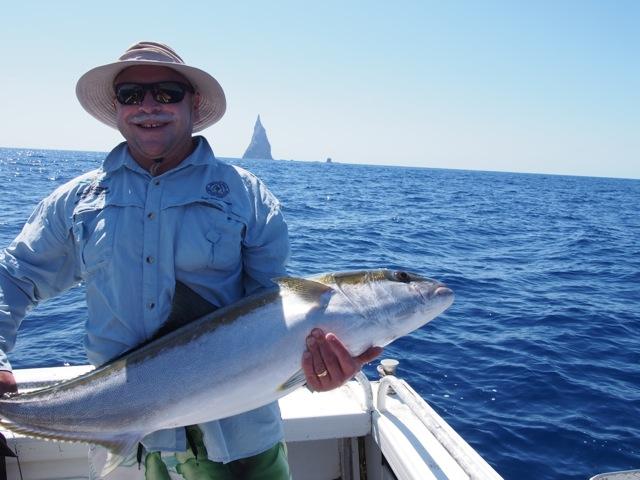 Crew member Rico got his coxswains’ certificate recently, and has been chartering: 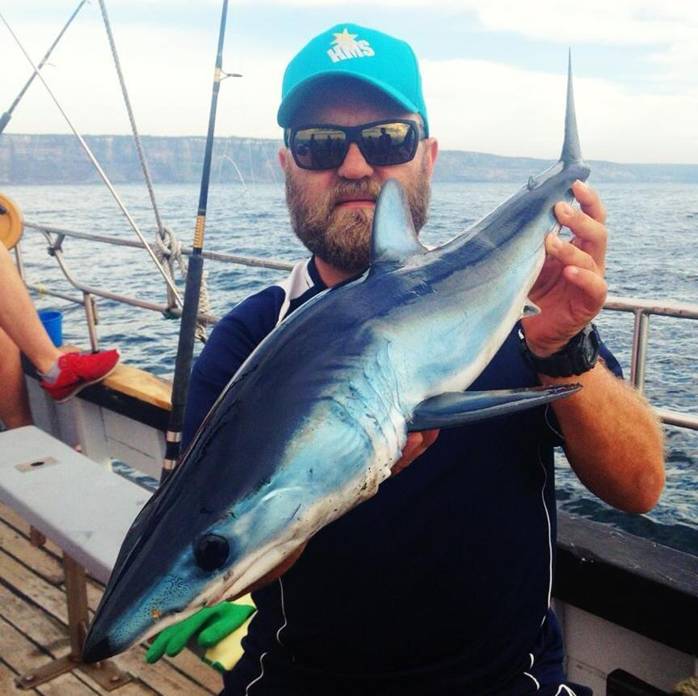 Caught this nice little 80cm mako this morning on a live slimy just south of Garie with the snapper rounding off the day.

Great mate, looking forward to our run to Browns later this week. Young Andrew is a top bloke and mad keen fisho who I’m pleased to say will be a member of the family next year, when he marries my beautiful niece Antoinette. Get in as much gamefishing while you can young feller, because she’s harder to manage than a rampaging marlin: 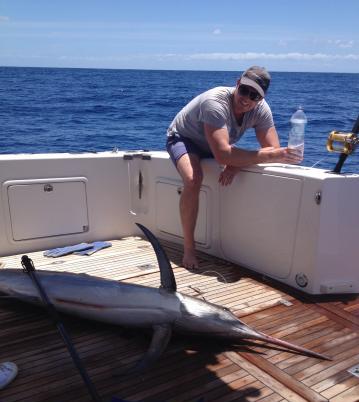 Further afield, and readers of US forums like 360 Tuna will know the Red Sea has arguably the best jigging and popping action available, anywhere on the planet. Jan (Our Man in Oman) confirms that theory: 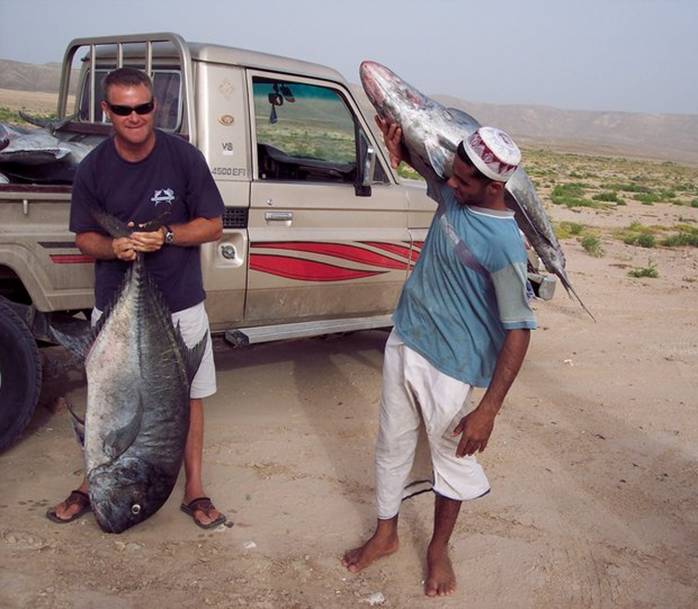 Hi Andrew, Some photos of game fishing in Oman. I was upset with the guys catching that many GT and not releasing again.

To politics, and check this out. A dolphin *wants* to make friends, with humans. That means problems for greenies, because it conflicts with their phony ‘marine mammals at risk’ scenario. So what do they do?  Wheel out a parkie – not a front liner, one of the hacks from Hurstville HQ - to tell lies about ‘concerning behaviour.’ How pathetic: 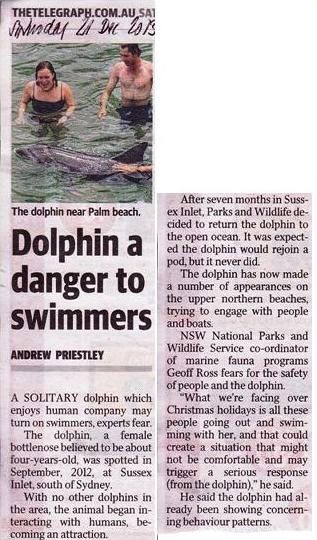 Andy I had daily contact with this animal in St George's Basin until people started physically interacting with her last Christmas. Instead of using the legislation & issuing infringements & God forbid putting resources in to educating the public they decided to relocate her into an offshore group at great expense to the taxpayer & untold $$$$$$ losses to the local community in well managed tourism income, in fact NPWS had ignored my informed requests for a joint management campaign with NSW Maritime for 5 weeks until a few days prior to Christmas 2012 until I threatened media intervention.

That all fits, Greg. The parkies now so arrogant they want to order animals around, the same way they do the public.

Les Palmer mentions the affair of the dolphins at Tin Can Bay some years ago. For those unfamiliar with the case, tourists would hand feed and get themselves photographed with the dolphins in much the same way as shown above. Then-Queensland Environment Minister Anna Bligh declared that, after a specific date, those interacting with the dolphins would be liable for giant fines. Instead of folding like so many do in the face of Green bullying, the local café owner announced he would have one thousand tourists on the beach feeding the dolphins that day. Albert Jacka would have been proud. Bligh backed down:

Look out, Steven Spielberg might hear about this and do another film. Instead of 'Jaws' he might call it 'The Revenge of Flipper'. The 'do-gooders' banned people from the century old practice of feeding the dolphins at Tin Can Bay in Qld because they said "the dolphins might become too friendly and used to being fed", which in their opinion, "would upset the dolphins natural feeding instincts". What next, ban the century old practice of feeding fish in Darwin? What about the thriving business of boat tours taking people along the South Alligator River in Kakadu and hand feeding the crocs? I wish the NPWS would just pxxx off and leave everything alone. They make me sick...

this dolphin whilst in the river at Sussex Inlet, was actually coming up and rubbing itself on our anchor rope, then would swim to the side of the boat and vertically come slightly out of the water like it wanted a pat and attention.... Plenty of people and children were amazed by the animal and at absolutely no point did it want to swim away nor did it ever look like "attacking" anyone.... NPWS and some greenies were constantly approaching people, handing out some flyer and saying it may attack if it becomes agitated, also saying that people could be fined.... Total tossers, I'm sure plenty of fisherman and general public would not stand bye and allow it to be hurt and if someone got "attacked" (lol doubt it) people would then leave it alone, not once did any NPWS say or mention anything else that could possibly "hurt" you in the water..... WANKERS...

The real scandal here is that dolphins are under no threat of extinction. Meaning tens of thousands of dollars - which could have been used for genuine conservation purposes - were wasted on this unnecessary and failed relocation. And this one can swim away, if he doesn’t like our company. Before closing, can I thank all our readers and clients for your incredible support, in 2013? Fourteen thousand visitors in one month is a phenomenal number: 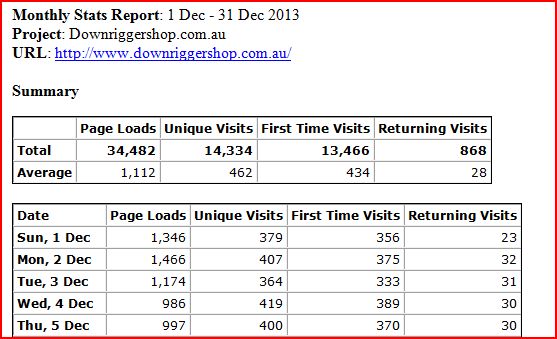 Until next week my friends, and as I always say, please keep reports and images coming in! Fishing updates, boating pics, tackle tips and your thoughts on politics. It’s all endlessly interesting and very much appreciated, by our readers. Cheers,