The news this week is all kingfish, hard to imagine happier news. Dave V, not magazine quality but the back story makes up for it: 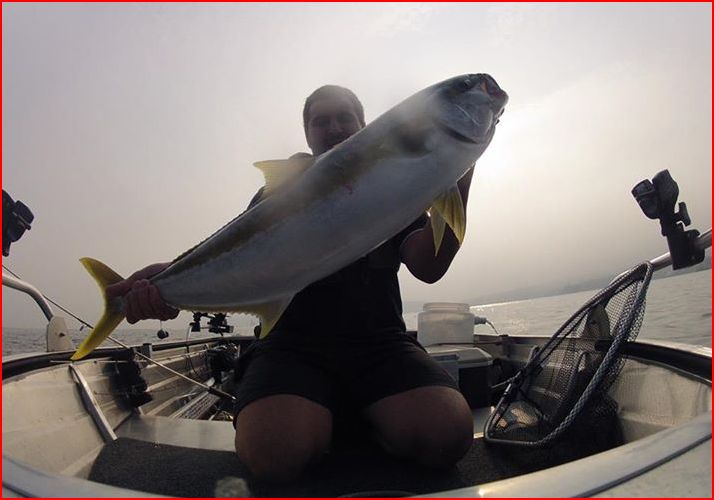 He launches his 12-foot tinnie with 15HP outboard solo after dark, and fishes for night time squid. Once Dave has plenty in the tank he ties up to a spare mooring and gets into the sleeping bag . At the crack of dawn he’s out there downrigging the lower Harbour. The technique delivered 108cm and 112cm kingfish on Saturday. That’s impressive! Dave Rowbotham at the Twelve Mile, same day: 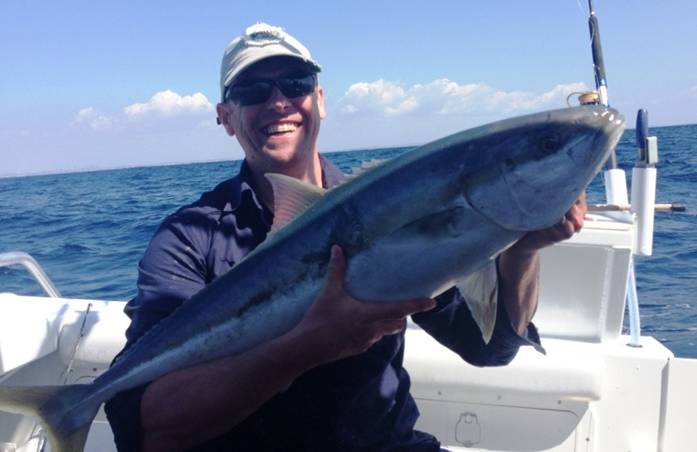 Your Hercules handled it lovely

Glad you’re pleased with the rod, David. Ed and Dave out there too: 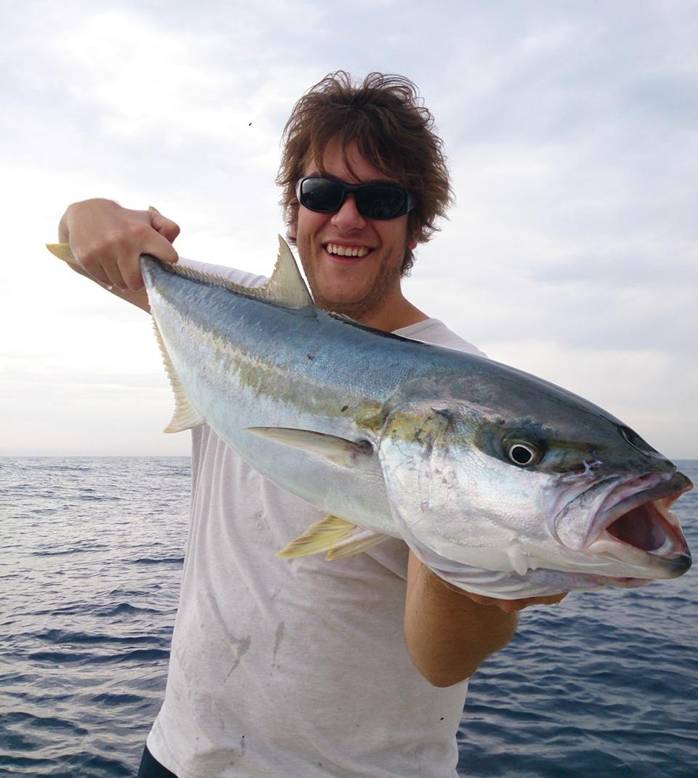 Hi Andy, we made it to 12 Mile this morning. The kings were only interested in your 100g jigs on 30lb trace, we could not hook one on 50lb. Needless to say fishing with the lighter gear meant we lost a few. Managed one close to 90 and another two around 75. We left them biting as we needed to get in before the wind hit.

Good one Ed and thanks so much for the report. We followed your recommendation yesterday. Nice run east at around 20 knots had us there quickly. On arrival just one other boat, a blue Haines 16R with two blokes aboard. I fish this spot so often I can tell whether the kingies are around just by checking the demeanour of the fishos already there. In this case, one of the blokes was jigging as if his life depended on it – the best sign you can have. Powering up the sounder showed the fish were going nuts, although some leatherjackets in the mix too: 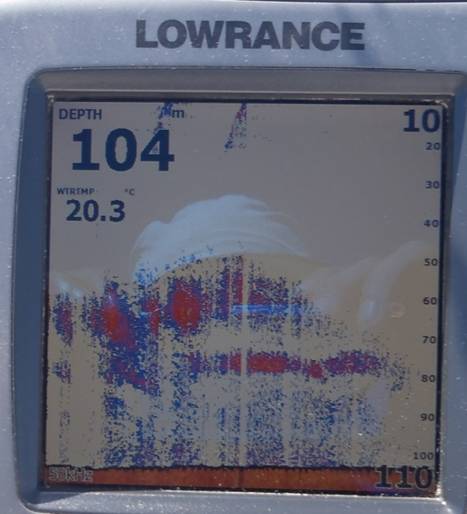 Down went the jigs, with me using the second last 100 grammer in the tackle box: 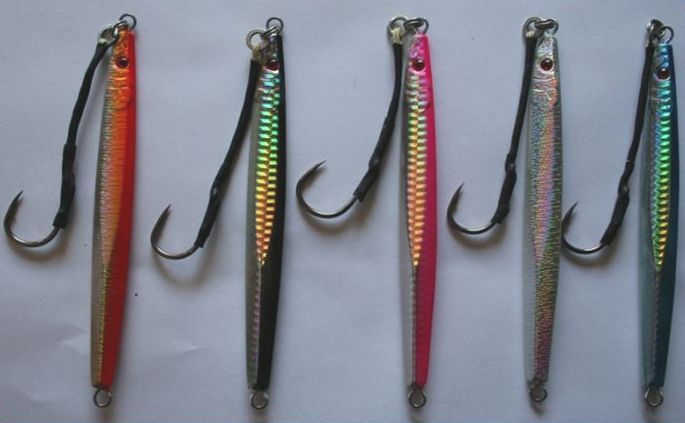 Jay and I hooked up first drop, and soon after brought these two nice kings aboard: 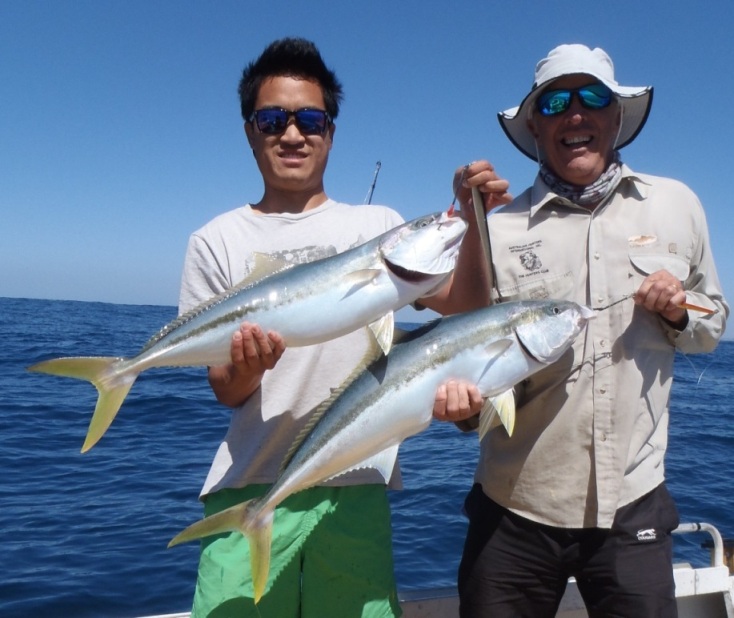 The blokes in the Haines were having a top time too. Our $245 jig combo (line, rod, reel with carbontex drags and 240m 50pound colour change braid) a perfect match for this 92cm yellow: 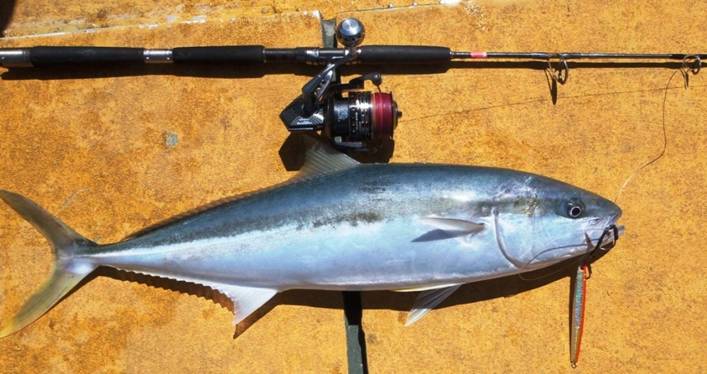 After so much initial promise, the bite tapered off after turn of the tide. Rico hooked a beast of a king which unfortunately pulled the hook. We headed for The Peak hoping that might deliver for us the way it has right through winter but, no dice. So back into Watsons Bay wharf where we dropped off Rico, said hello to Ivan, and bought fish & chips for lunch. J Nice feedback on the Facebook page, after I posted a pretty cheeky hook price comparison: 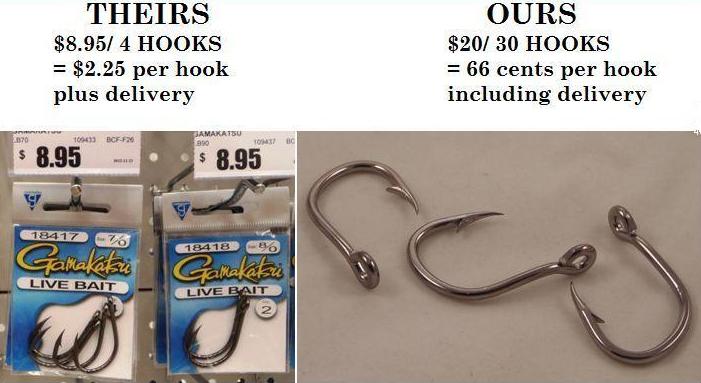 Lots of fishos are looking for value, in that department: 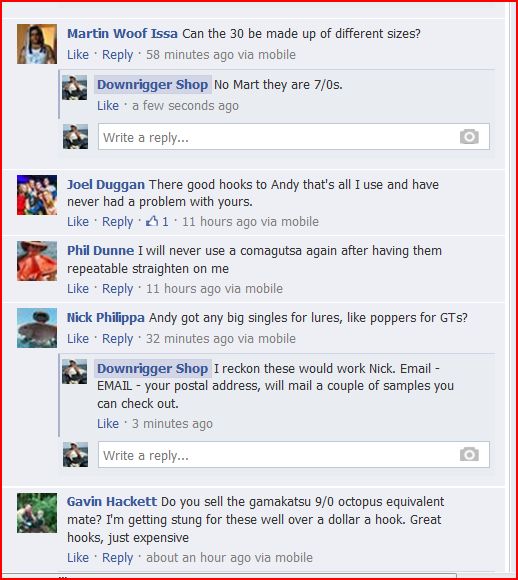 Some big flathead taken over the weekend now that the water’s warming up fast. David Thomas emails:

Hi Andrew, thought I would share this big girl with you. Caught and released in Broken Bay

Beautiful. Matt Prior got one for a friend on the Big River too: 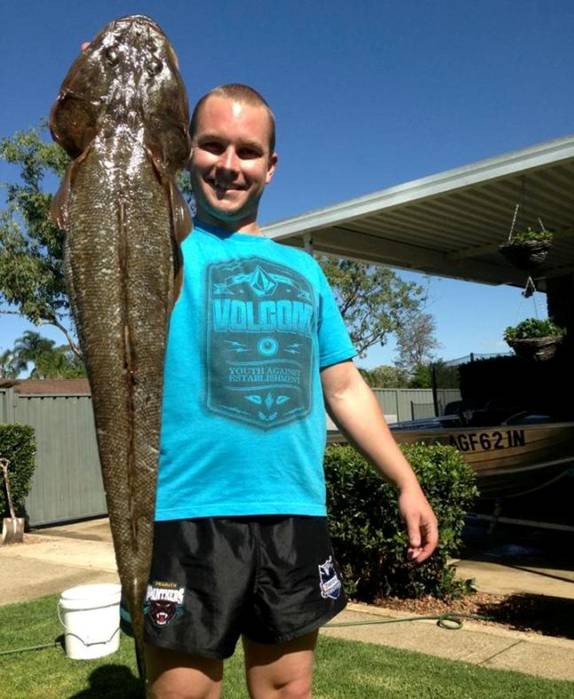 Good on you getting him onto a big one, Matt. Coincidentally I received this positive sitrep from new client Richard A this week:

I am keen to read your fishing report as I am very new to fishing. I have two boys that love fishing and we have spent the last couple of years estuary fishing for flathead and bream, however I recently purchased a Brooker 5m side console so we could venture out thru Sydney Heads to try our luck on some bigger fish. I end up visiting my local (tackle store) to gather some intelligence on how and what to do and have found the guys there to be very helpful in fact they gave me your business card and said check out your website!!

Greg also offered to come out for a days fishing with me and my boys to show us the ropes with things such as catch/using livies, setting up rigs and places to fish!!! I took him up on the offer and while we landed up mostly rats my boys have been blown away by the experience….and who could forget that  exhilarating sound from the reel when a kingie takes your bait it is so addictive and gets the adrenaline pumping!!! I like the downrigger concept and plan to save up for one to fit to my boat but in the meantime I need to learn the basic of both safe boating and fishing when we go out through the heads so as to ensure my boys have loads of fun.

Enjoy it while you can, Richard! They grow up SO FAST. Here’s my eldest with a Charlotte Head longtail. He’s 23 now: 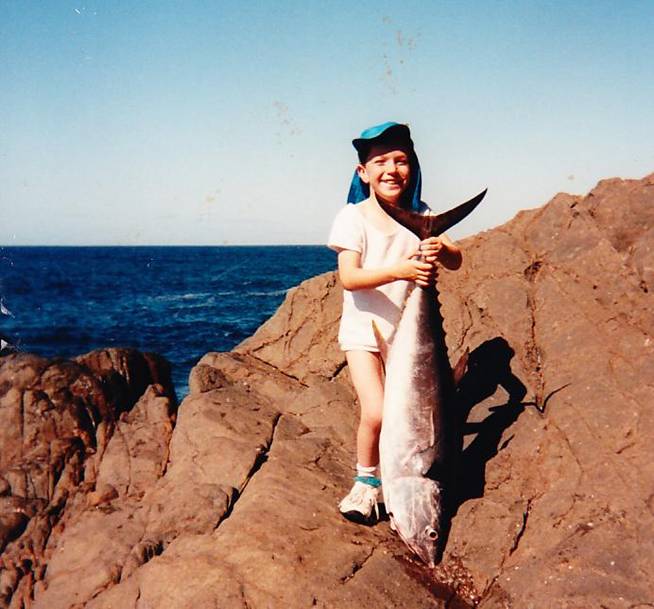 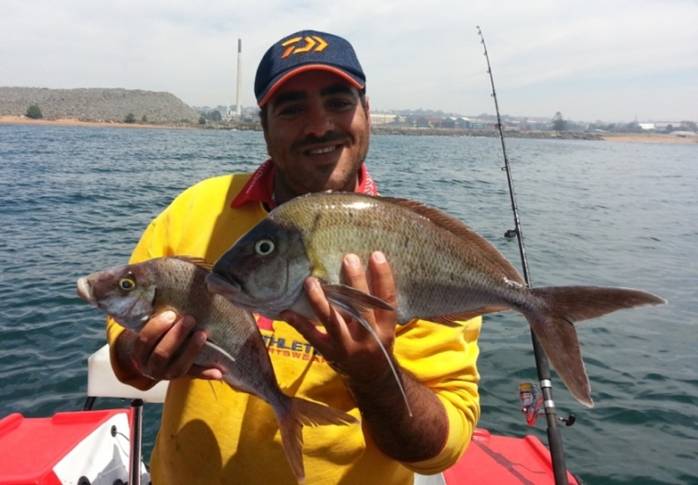 I went out to one of the islands at Port Kembla on Sat and landed these sweet morwong.

Then the weather changed so quick we headed back ASAP.

Good move cobber, it blew up hard and fast that day. Adam K down your way too: 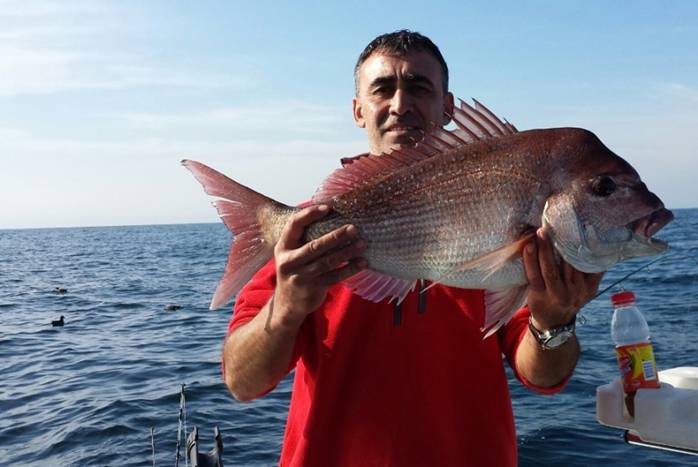 Such a beautiful fish, aren’t they? And the way numbers are rebuilding we’ve got some glorious seasons ahead. Even further south and Our Man in The Sand has a Jervis Bay update. Thanks, Dave: 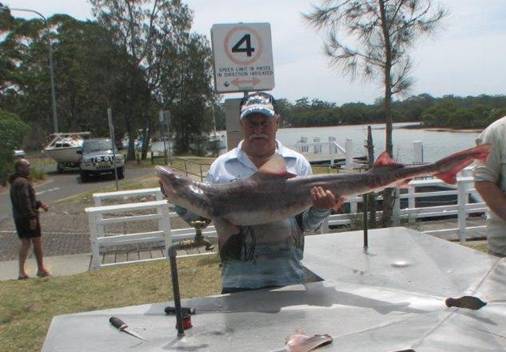 Hi Andrew, my mate "Poacher" with a 5ft plus Gummy Shark caught in "JB" yesterday on his lightweight bream rod with a small egg beater...hard work. He shared half with us and we were surprised how good it was on the plate considering the size. It was a great morning out there till the wind picked up....white caps all over. However a lot of happy fishermen came in with Salmon, flatties and flounder.

No bonnies or kings to be seen.

Wow, the gummy’s nearly as big as Poacher’s moustache. Deep south news is that I’ll be at the Eden Gamefishing Club this Saturday night, discussing fishing and politics. All welcome and if you’re around please stop by, we’ll be in the hotel restaurant out back. And readers on the south side of Sydney very welcome to attend a talk on jigging, downrigging and deep water fishing next Tuesday night, at the Port Hacking Game Fishing Club. Here’s the details, see you there I hope: 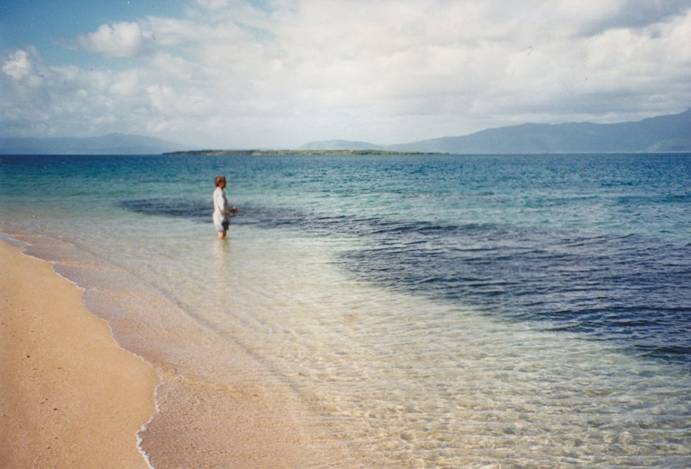 I must also mention to our readers how truly (and I really mean that) grateful I am for your support whether it be via the weekly email, on the Facebook page or at the website, which just recorded another 10,000+ visitors in October: 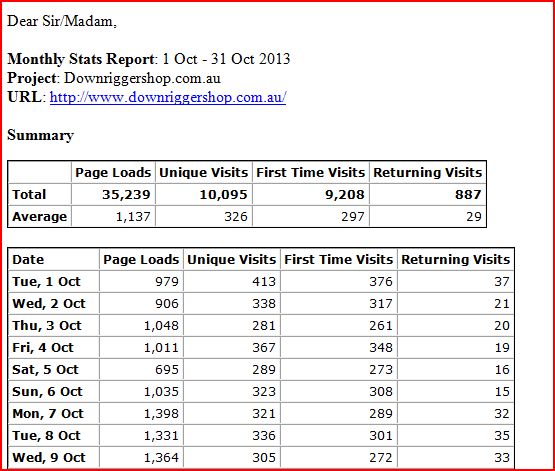 Thank you, I am genuinely humbled.

Laura has a business idea which might be helpful: 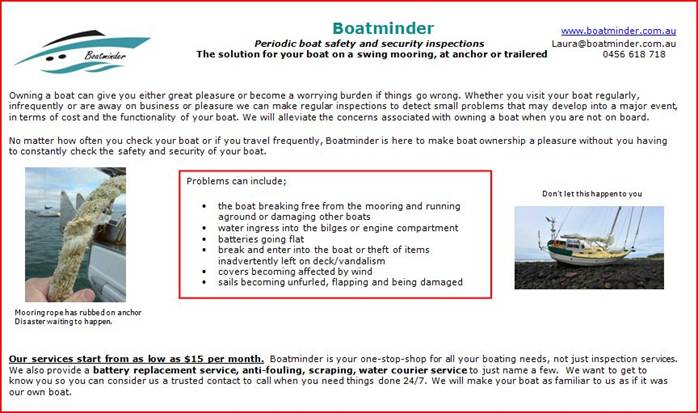 Hi Andrew, my name is Laura, member of SA.  We actually have met one day you came along side of Storm Cat when Sean was waving at you from the back deck. I wanted to ask if there was any opportunity to advertise within your newsletter my newly formed company, Boatminder?  You can go to www.boatminder.com.au if you wanted to read about us.  Do you have advertisers within your newsletter?  If not, all ok.

That’s fine Laura, if it’s interesting or helpful for the fraternity more than happy to add it. Sounds like a top idea so if that might be relevant to you, please click through and maybe send her an e-mail. Atlantic salmon, in Sydney?? Hoo yeah. John McDonald: 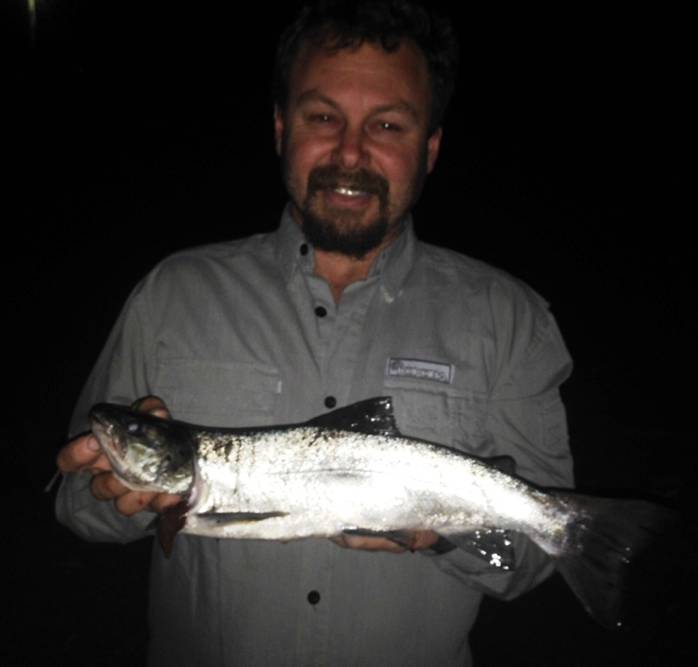 Hi Andrew, here is that photo of the Atlantic salmon I caught up the Nepean a few weeks ago. It was 47cm.

John, can you imagine how many there are in Warragamba Dam, above where you were fishing? If anyone can tell me why NSW fisheries are stocking a water storage where rec fishing is banned, please do – in confidence, if necessary. The (very good) Wildblue website reporting an amazing early season snapper run, in western Victoria.

These two came from the Lee Breakwall at Portland, and there's been plenty more like them landed: 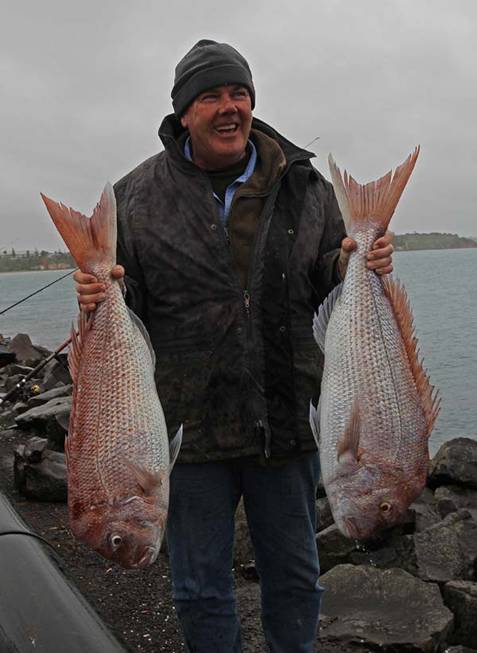 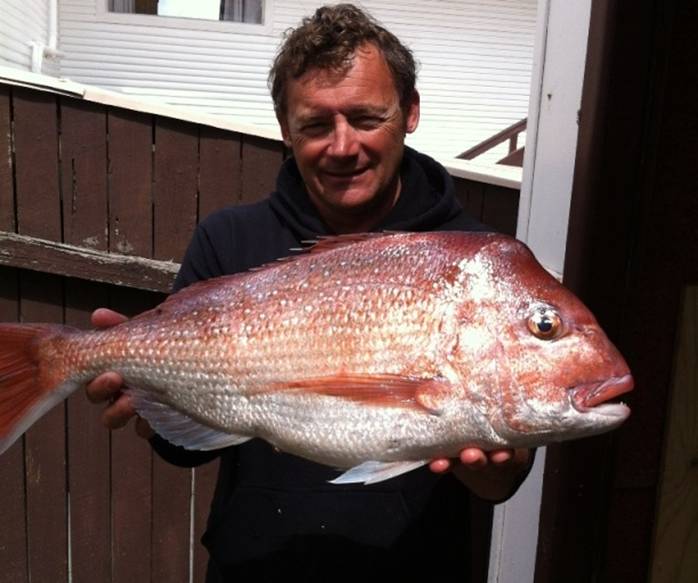 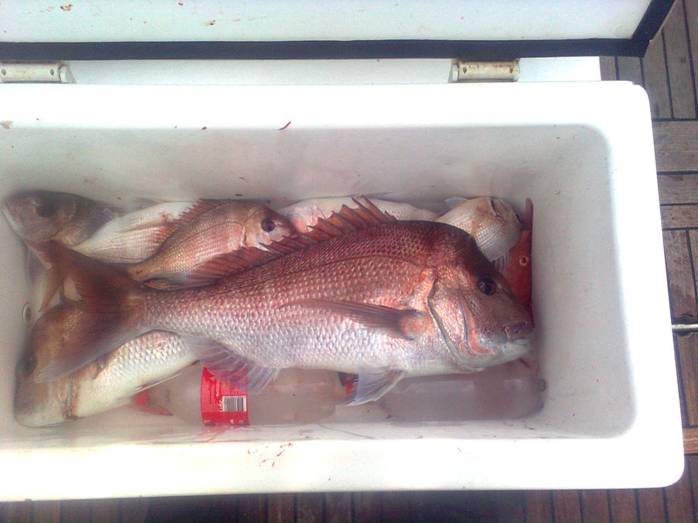 Always good to hear from you, Kevin. To points west, and Paul Grant says our braid works well on big samson fish: 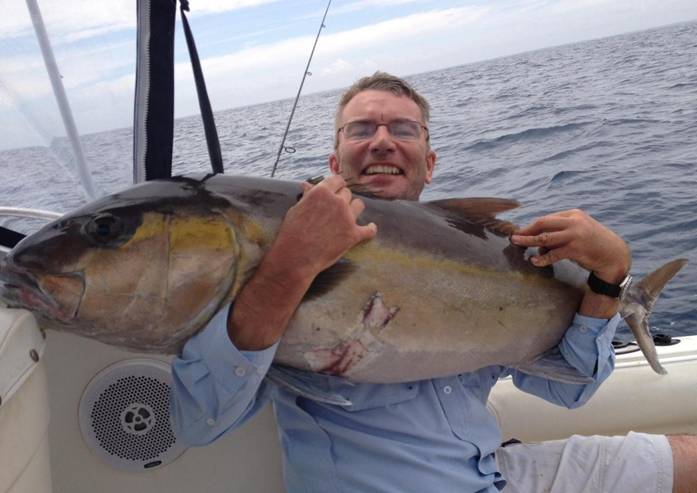 Andrew, just a quick one from W.A. to again endorse your braided line with this horse caught 9 miles out on Friday. Caught in 30M of water on a pirate jig, guessing 35-40Kgs.

Excellent, Paul. Knowing our braid can handle a horse like that is hella reassuring. It’s sheer torture, following Alan’s adventures on the Carmel D: 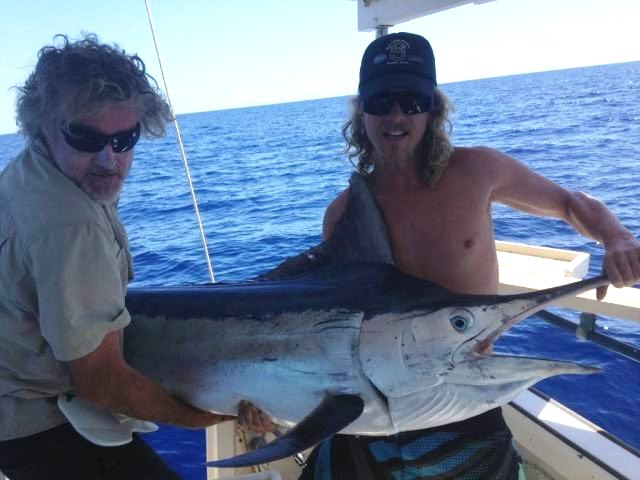 Hi Andy, just leaving Townsville now and trolling all the way to Cape Bowling Green. Scored my first marlin the other day near Orpheus Island using my 20W combo. The black marlin went 40-50 kg. We spent at least 15 minutes swimming it before release. We've spent a couple of weeks diving and spearing on the GBR.

We got plenty of lobsters as well as mangrove jacks, coral trout and emperor coming on board the Carmel D. Alan 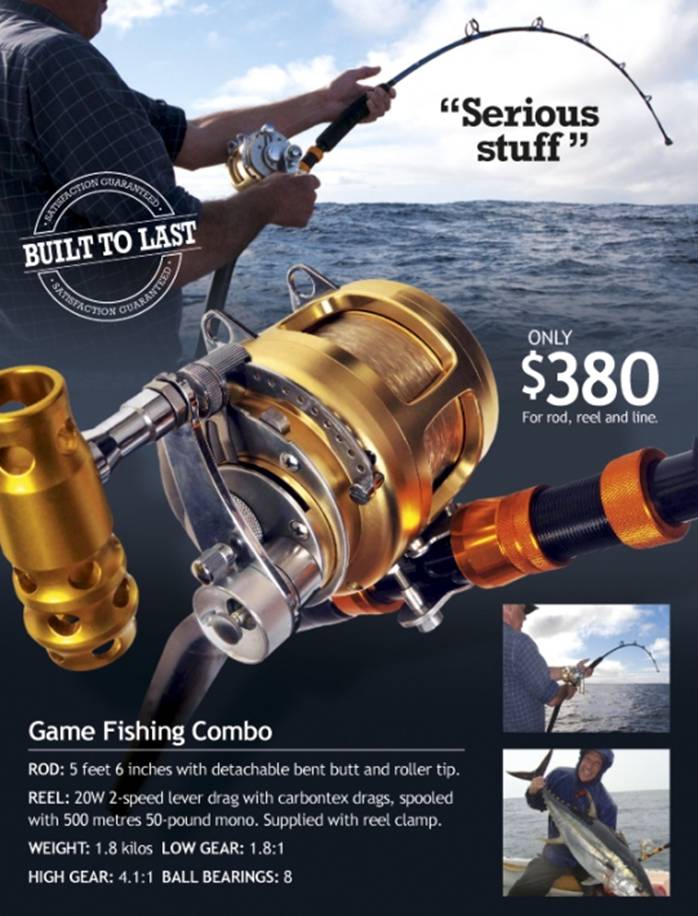 Hal Epstein, from Halicat Charters in Sydney has retired from the business, which is a shame. But the future plan is to chase more beasts like this one: 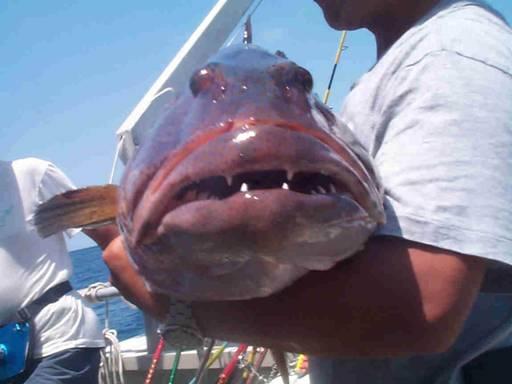 The photo is lousy but it goes back to 2002 a 22.5 kg trout on a popper somewhere off Townville on our way back from jigging at Myrmidon reef. Renowned for dogtooth but loaded with bronzies that spoiled the game.

Blimey can you imagine how many fusiliers disappeared down that gaping maw, Hal? Steve says lots of fishos were excited about ALDI’s tackle box sale, last weekend: 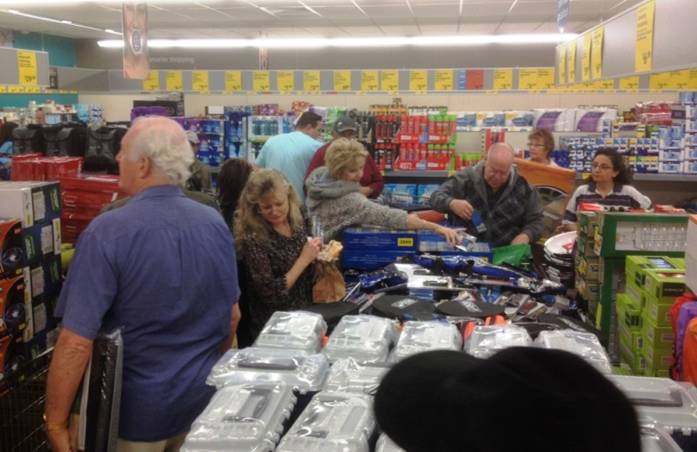 Hi Andrew, set my alarm this morning as Aldi had some fishing gear on sale. I was not alone. I wonder if our vote chasing politicians know just how popular fishing is as an Ozzie pass time?

Good question! My guess is they know the numbers – but they also now know how disorganised and apolitical we are. If that ever changed, we’d be an unstoppable force for angling rights. To politics, and this would be the quietest period in that regard since the weekly newsletter started, 150 issues ago. In desperation I checked personally with NSW Maritime Minister Duncan Gay and NSW Fisheries Minister Katrina Hodgkinson, to see if they had any of the usual ocean closures, bag limit restrictions, boat registration fee increases, or mandatory life jacket initiatives happening this week. But they were heading out to a National Party BBQ lunch, and refused to comment: 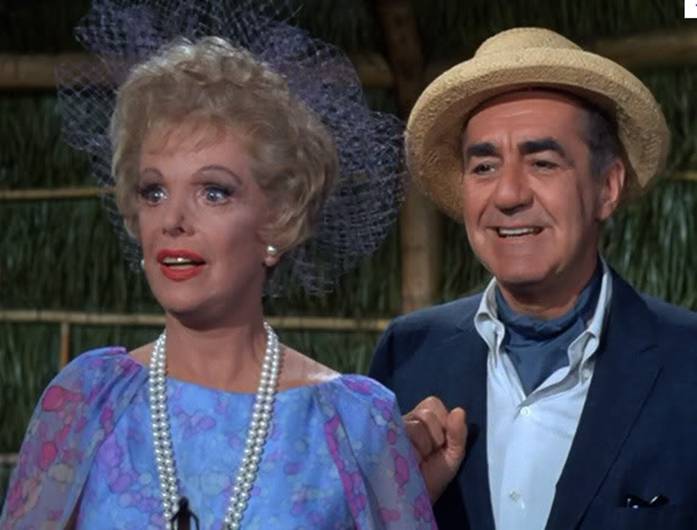 Hopefully, there’ll be some political news next week! J Cheers,