With the wind up and down like a yo-yo, last weekend was all about weather. Matt Reid from Raptor Charters downrigged close in: 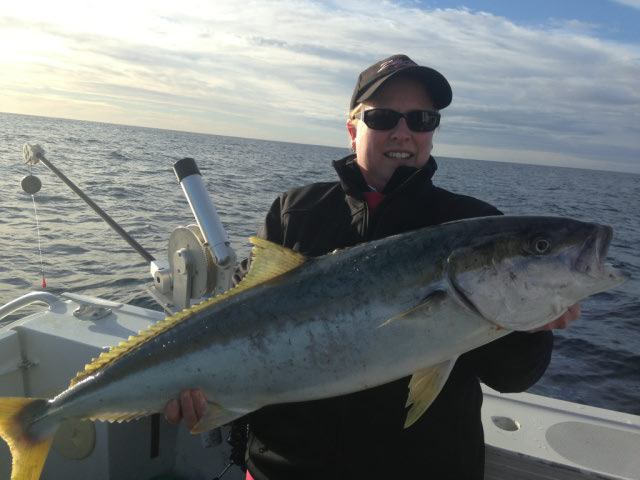 What a fantastic fish for the middle of winter, here in the big smoke. Bob Penfold visited snapper paradise AKA Broughton Island: 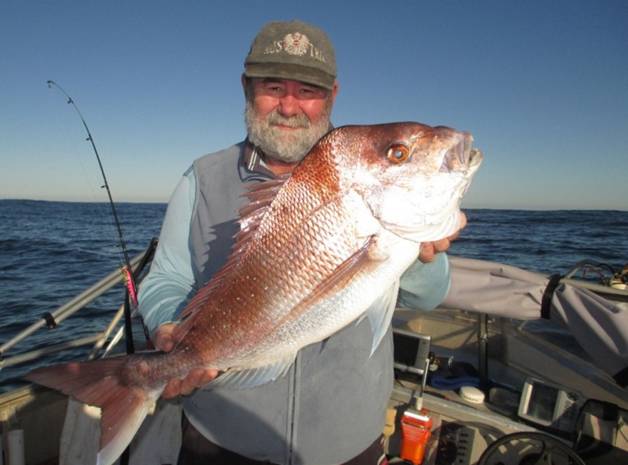 Andrew, plenty of snapper being caught at Broughton recently. Here is a snap of Wayne Cook from Lake Macquarie with one we caught last week at Broughton while fishing from my boat.

Very nice indeed, Bob! I have *got* to get up there before the season ends, just never seem to find the time. Bruce Rayment went to Browns midweek, and just about had the place to himself: 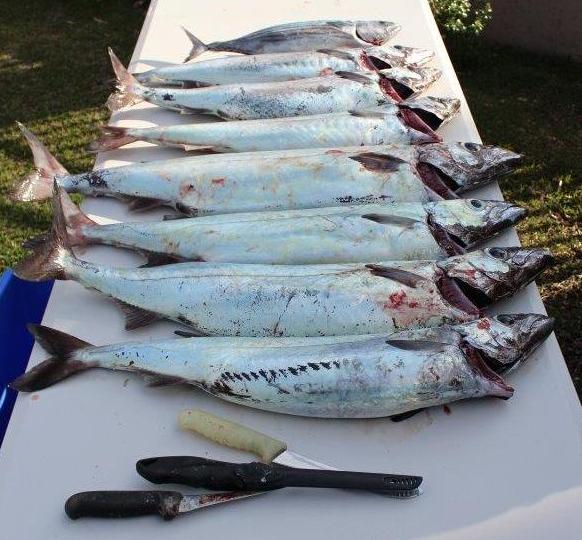 Felt like a charter boat skipper and took 3 work colleagues to Browns to drop the bottom. First fish as soon as the baits got to the bottom and every drop for the next 6 produced fish. The Gemmies continue to be of a good size. Came home with 7 between the 4 of us. 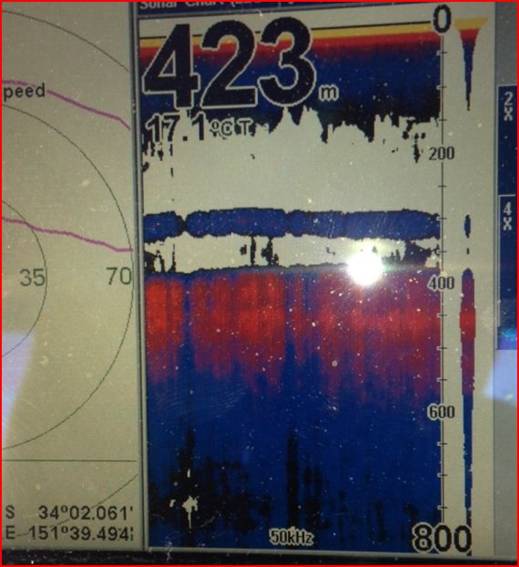 Conditions were quite rough at Browns mid-morning but were a lot more settled inside the shelf and quite calm at The Peak. Jigged the Bonito looking for Kings at The Peak on the way home.Image attached of the sounder at Browns with the Gemmies swarming.

Look at that, a solid band of gemfish one hundred metres thick, covering the top of Browns Mountain. Yet only a few years since  agenda driven bureaucrats classified them as endangered. Soon ‘marine scientists’ will offer results in advance on eBay: 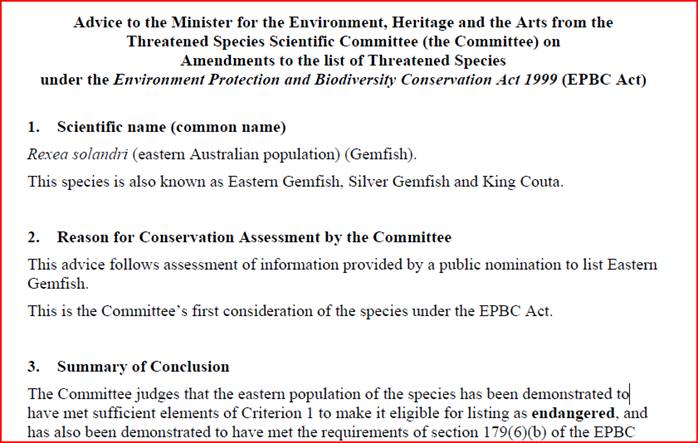 ‘Endangered’ gemfish, what nonsense. On the south coast, Kevin Preston and offspring have been doing extra well:

hi Andrew still SBTs down our way fished 1-8-13 we only found albys lots SBTs off Ulladula here is a pic alby 6.5kg on 8kg tippet and of my son Josh SBT 37kg on 30lb braid plastic rod 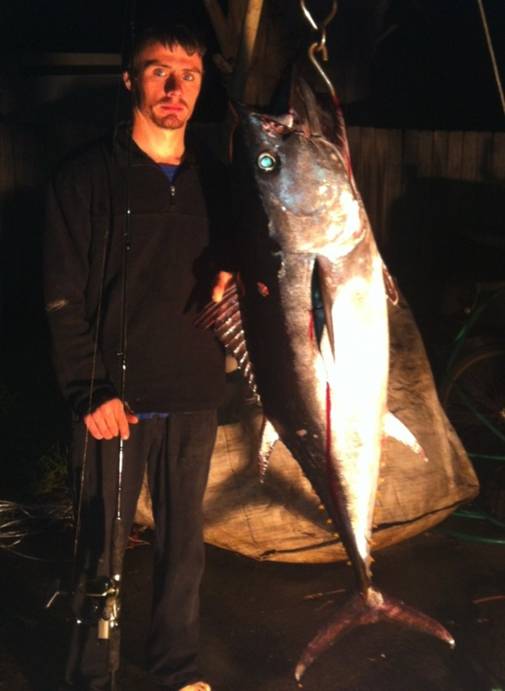 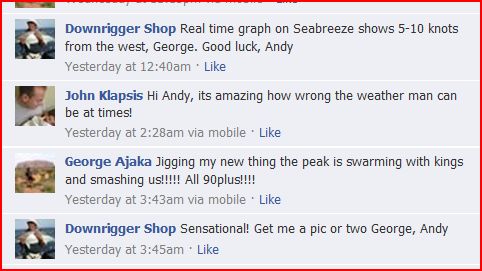 We knew where the first stop would be, on Friday morning. The big question was, would sea conditions let us get to Browns too? Client and friend Bruce Rayment checked in to say he was headed there, so I figured we could get a weather update on the VHF. On arrival at The Peak there were four boats on station, lots of excitement and most of them hooked up. Kingfish were going nuts so we went straight into action. Our new 100 gram jigs worked a treat and being light were very easy, on the arms:

Small kings marking in scattered patches, some quite high in the water column: 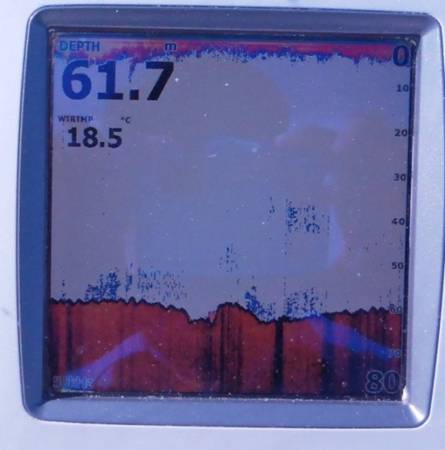 Darryl stuck to bigger knife jigs and why not, because they were working for him: 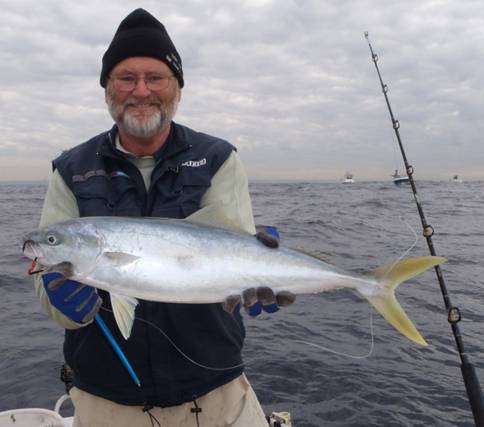 I checked in with Bruce on channel 21 who told me gemfish were going nuts at Browns, but he was having some mako trouble. Just at that moment, a smallish mako came in behind our prop and I fed him a bait on a light jig combo, immediately passing the rod over to number 1 son Jeremy. He got stuck in: 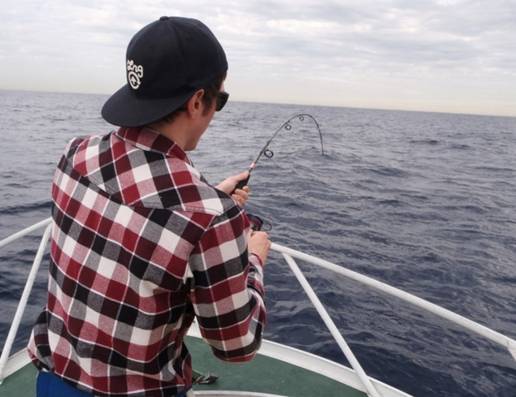 After some cartwheeling jumps (which unfortunately we didn’t catch on camera) the fight settled down to the usual slog. The new light jigging reel we were testing held up really well, thankfully I had put a fresh set of carbontex drags in it the night before: 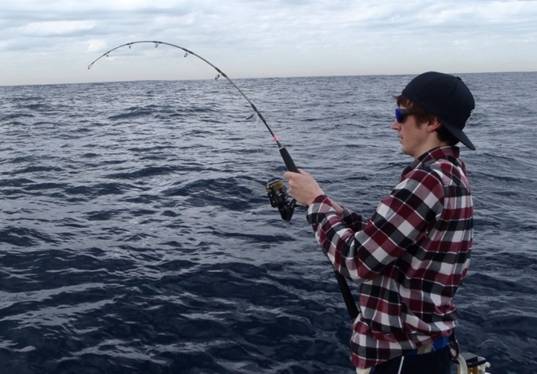 Perfect size for the table so when he finally tired, the steel went in: 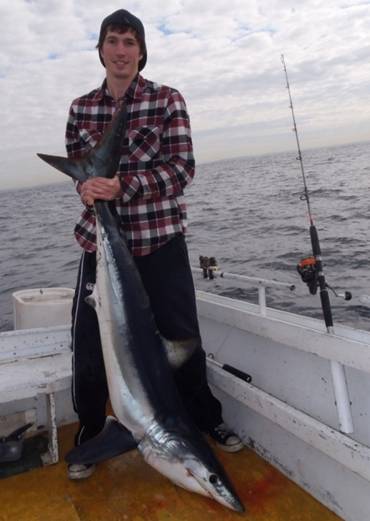 Maybe 35-40 kilos which just fit into a tuna bag, keeping his wicked dental array out of reach of legs and feet:

Back at the ramp and while cleaning him found this sole slimy inside: 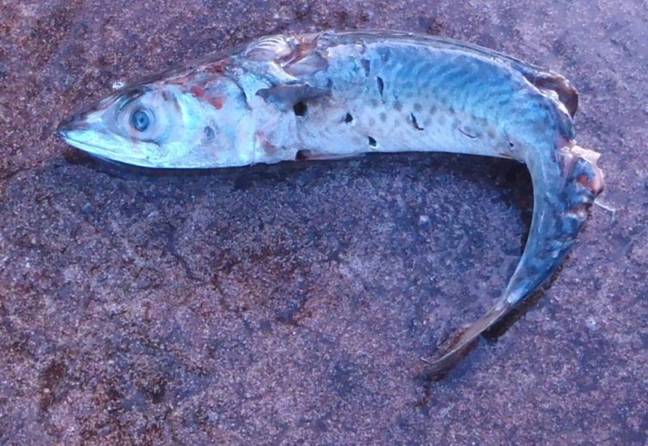 By crikey we’re having a top time this winter. Get out there and enjoy it if you can lads, because it won’t last forever. To boats, and Dogtooth sent in a pic of his mate’s rig. All business: 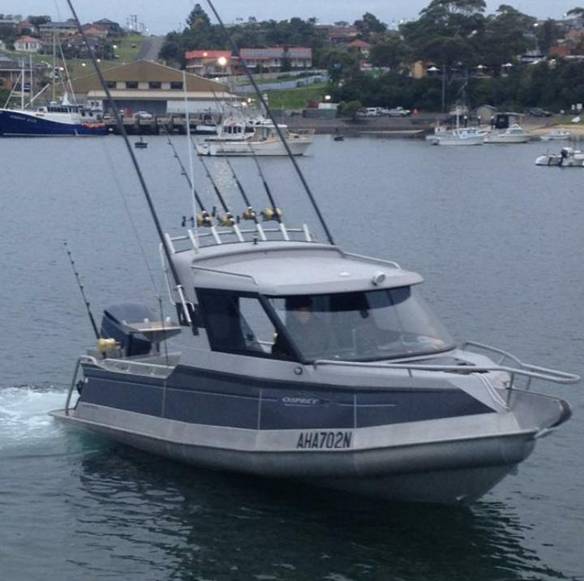 George and Elias stopped by for jigging gear and showed me his NZ-made Ramco 600: 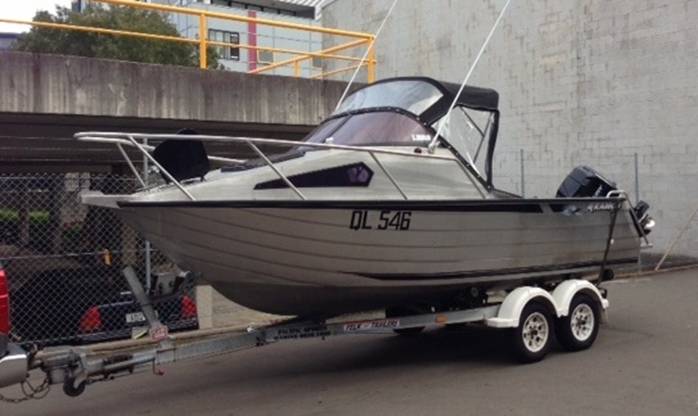 Jim, you’re right. The curved windscreen looks really good. J This plastic fantastic Aqua Truck intrigued me when I saw it at the Sydney Boat Show on Saturday. Made in Tasmania: 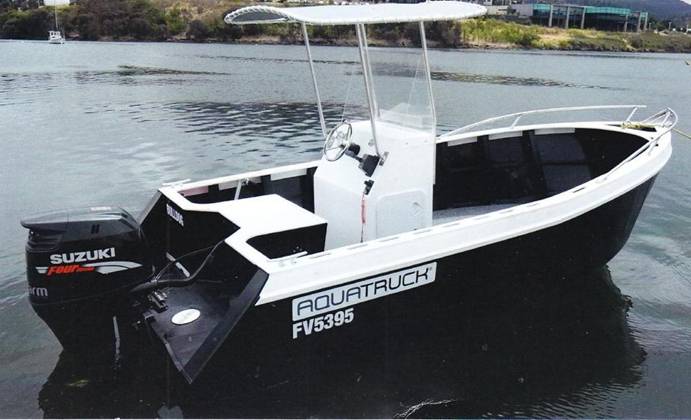 To News Of The Weird and 23,000 views on our Facebook page of the twin cab that went under at Tunks Park ramp, last weekend: 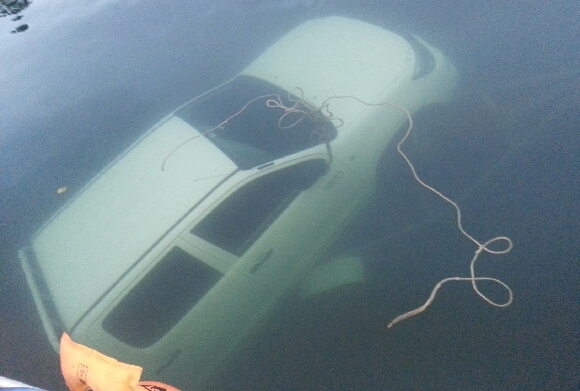 Blimey, that’s just sad. This dingo started the day with some fresh seafood at Fraser Island: 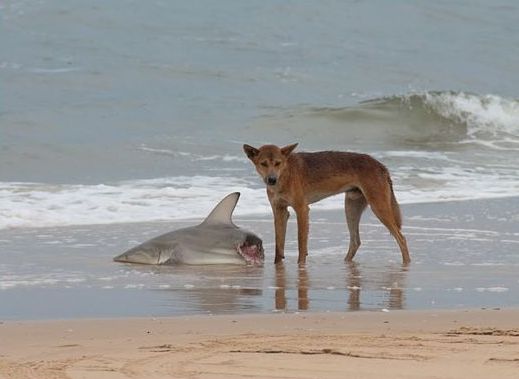 Hmmmm. With a good forecast for Sunday and stacks of blokes planning a run out wide inquiries for jigging tackle have gone ballistic, this week. The Rapala Jig Day is a great rod – even better, after minor tweaking. We've taken the overhead version and added a Fuji gimbal so that it can be used for trolling and with a gimbal belt, on a big fish.

Not a key part of its benefits but the rod looks and feels really good too, which is nice. Here’s specs:

This rod is an ideal match with the Shimano Ocea Jigger, Daiwa Saltist 40H, Jigging Master Power Spell and the like. But you could put a trolling reel on it too. You can see Oliver fighting a Long Reef king on the spin version of this rod here, 6:40 mark onwards, in one of Ian Treseder’s Hooked on Sydney videos:

2-piece means it can be mailed (so, cheap shipping) and also carried on a plane. Good back up stick for travelling.  Price $175, send me an email for more pics or details? We carry the spin version too, here’s its profile under 4 kilos of load: 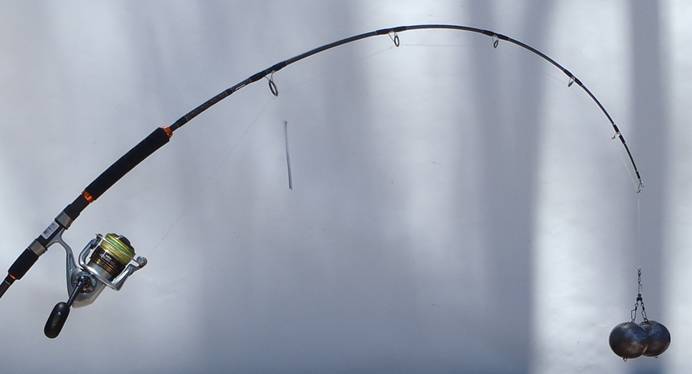 Johnny Verano fished on Wednesday with Greg Reid from Bay & Basin Charters. Now this is a nice red: 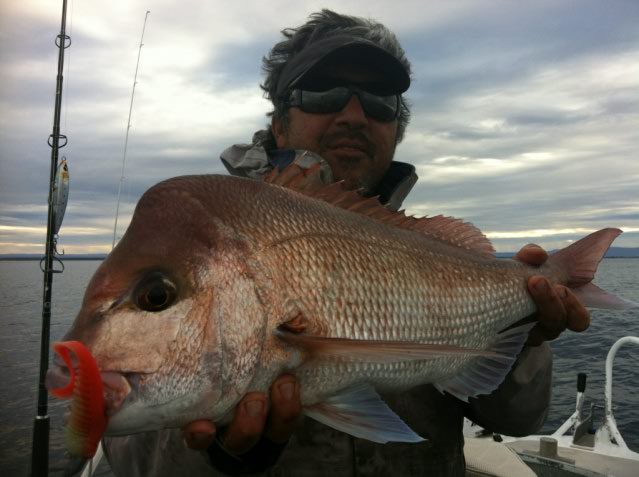 Ben Squire had a tough one off Broken Bay on Monday: 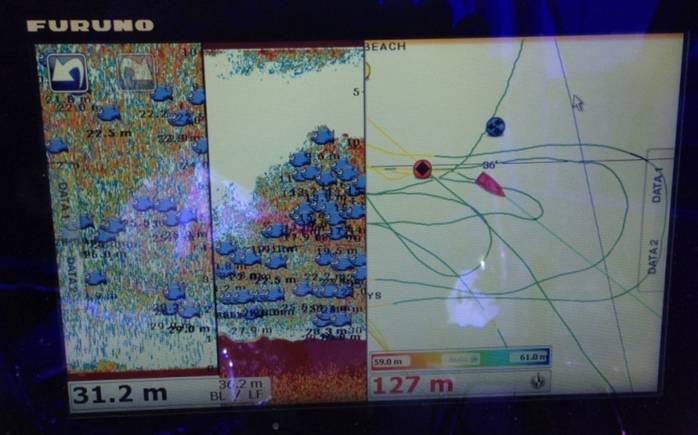 I fished Pittwater yesterday for not much. Everywhere we went was stacked with BIG yakkas and small slimies, and things looked very promising (Valiant, West Head, Whale). But every time we stopped for a jig or drift we ran into dolphins and seals..! Even the bait ground at West Head was lousy with dolphins. So we went for a troll and hooked a big bonito but lost it to a seal just off Palm Beach.

Took the seal scarer out for a test last Friday but couldn’t find one, Ben. Trying again tomorrow arvo and will report on success or failure. Brian Dunlevy’s kicked off the flathead season: 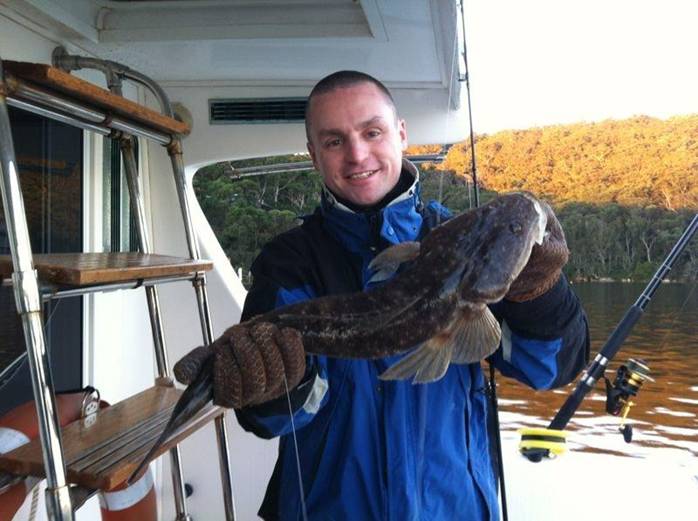 Caught this nice flatty in Brisbane Waters using a live bait (yakka). Holding it closer to the camera for extra effect haha

I would never do that, Brian! J

To politics, and I've been critical of (NSW Maritime Minister) Duncan Gay's refusal to fix the giant potholes at most NSW boat ramps. But at Roseville last week, it looks like pothole repairs have started: 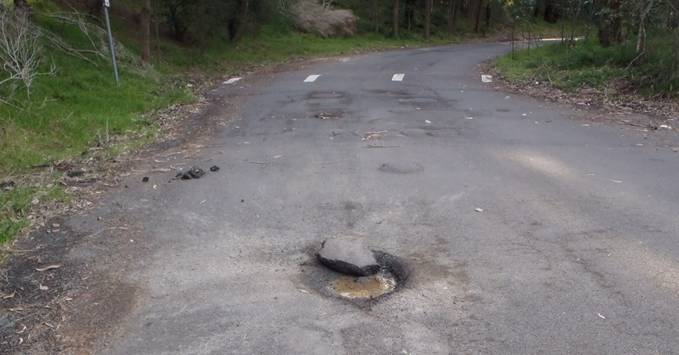 On a serious note, At the Coffs Harbour protest meeting, Rec Fisheries Manager Peter Turnell was asked if science was behind the bag limit cuts. His answer? 'No.' Someone then asked if not science, what was prompting the review? His answer? 'Community concern.' Now we find out it's the greenie community. From the Newcastle Herald:

The same greenies who Bodgy Hodgy and Duncan Gay promised would be sidelined, if we voted to change the government:

‘Restoring the balance.’ I’d like to laugh, but there’s nothing funny about being lied to, simply to get your vote. From the policy document, which I urge you to read:

Hodgkinson’s idea of giving people a say on issues that affect their lives is to:

2. Request submissions, knowing that – just as in South Australia – she’ll accept ‘submissions’ from anywhere in the world. The submission from a greenie in Seattle, who couldn’t find Australia on a map, cancels out that of a fisho who’s out there every week.

As for using money in an ‘effective and appropriate manner’? Yesterday, Thursday 8th August, Hodgkinson gave another $1.2m to the Port Stephens Fisheries Institute. Much of the money will be wasted on yet more grey nurse shark research. No wonder fishos are fed up: 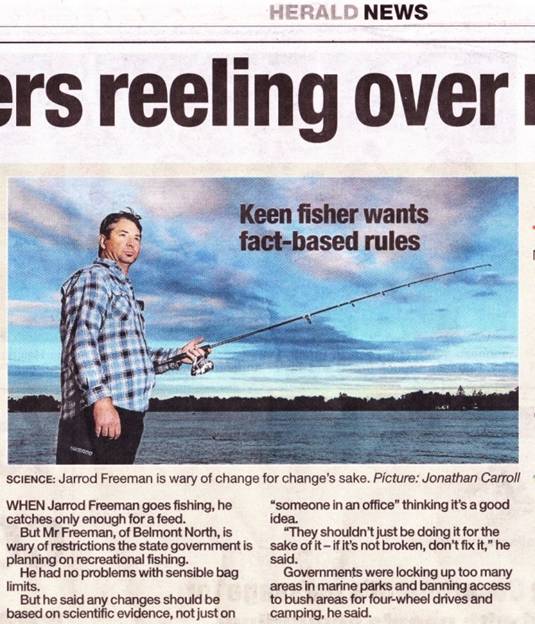 Two things must be done by anyone wanting to defend our sport. Firstly, you must lodge a submission. That takes less than five minutes, and is attached to this email. Roger Edwards writes:

Hi Andrew, had meeting with Steve Bromhead MP this morning, he said he was on our side and has promised to write to the Minister referencing the document that I sent you a copy of and asking for copies of the scientific reports upon which the decisions were made to halve bag limits.

He also told us that the reports he is receiving back from fisheries with respect to the discussion paper and submissions was surprising in that there have been very few submissions received, hence the extension of time to the end of August to get submissions in.

Please in your next newsletter could you implore people to get their submissions in, if there is a perception that we don't care we will certainly get shafted, don't sit at the pub or club moaning about the changes, do something constructive, complete the submissions even if only to tick the don't agree box in each area, it really is not that hard. If people write to their local members and get the local member to needle the Minister also. If we sit on our hands we will get what we deserve.

Agreed, Rog! Secondly, consider a Senate vote for the Shooters & Fisher’s Party at next month’s federal election. They registered a branch in WA three months before the State election in March 2013  and got one MP elected, with another just falling short by 78 votes out of 40,000.

While at the same time getting rid of one of the most horrible greenies in Australian politics:

And that can’t be a bad thing. J I’ll be at the Eden Game Fishing Club AGM and dinner this Saturday. Super excited and very honoured, to be invited. And at the Vikings Fishing Club in Erindale ACT next Tuesday, talking about downrigging, jigging, and all things kingfish. Thanks to Vic from the Club, for this flyer: 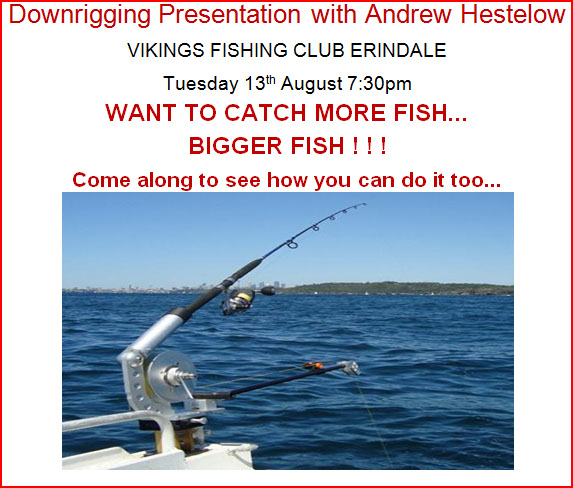 Stop by if you’re anywhere nearby? I’ll be bringing a stack of DVDs and other freebies. Until next week - please just complete the attached submission and get it over and done with,