Kingfish are back! David Clarke reports a top result on Wednesday: 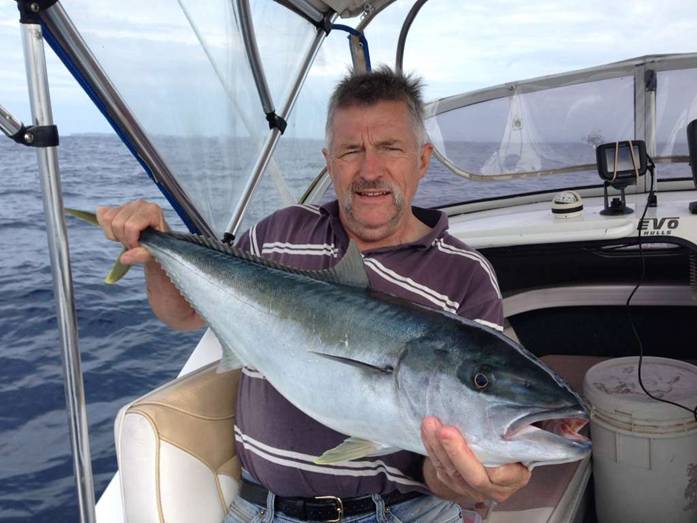 Hey Andrew, had a great day out off Greenwell Point today. We grabbed some yakkas early, then out to the drift and found the kingfish plentiful. We brought home 8, with Dad’s PB going 92cm.

We got smoked a couple of times by unstoppables, one of which is now swimming around with my Catalina Jigging Rod and Catalina 4500 reel still attached, what can I say? It hasn’t sunk in yet…. I’m numb…. Hey, I’m after some more live bait hooks and you used to stock these, is this still the case? as I couldn’t find them on your website. Might have to buy one of your jigging outfits too…unless someone jags a beaut little combo off the Shoalhaven soon.

Dang. Sorry to hear of that tragedy David, but at least you had a memorable day with dad. Matt Reid from Raptor Charters had a blinder on Thursday off Sydney. How’s this, for a solid king? 115cm, taken on a live yellowtail: 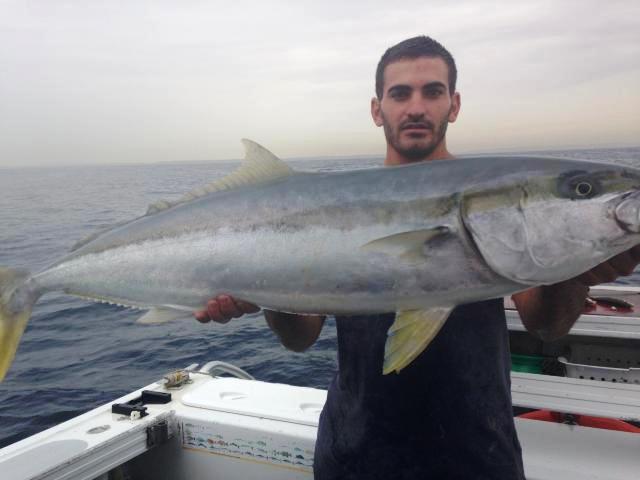 That’s fantastic. Some good fish from the mid north coast too. Here’s Rocket: 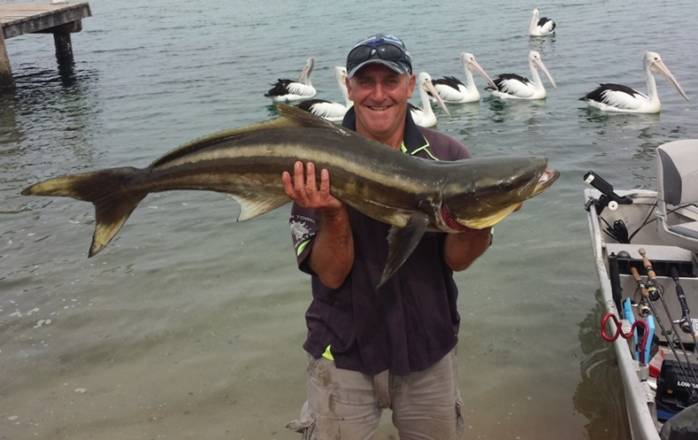 Gidday Andrew ' Trust you and the family are well. Great reading the reports of late. It's a real shame that the Coffs boat ramp/bar is in the state it’s in as we were going to have a few days there as well, but we'll look at the other alternatives . On the other hand had a great day on Friday with my 15kg Cobia caught in the channel at Tuncurry/Forster after 15 minutes of sheer steam train. I managed my PB cobia an hour earlier another local battled his 22.5kg Cobia hope to catch up with you soon take care 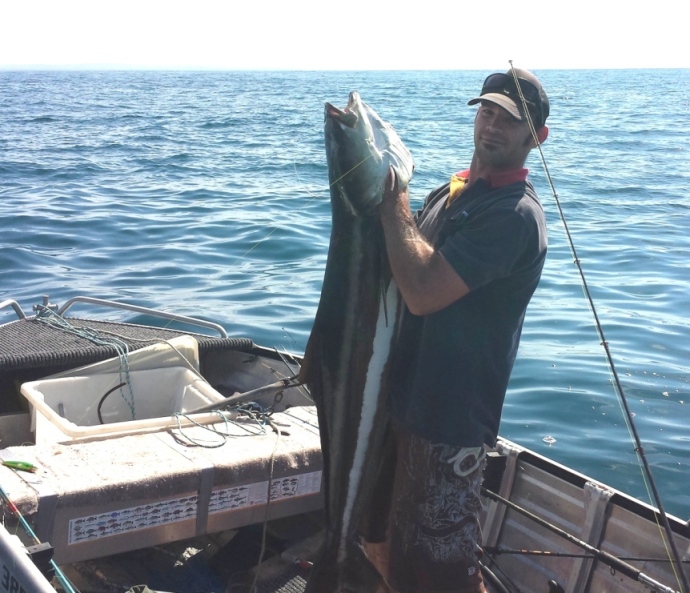 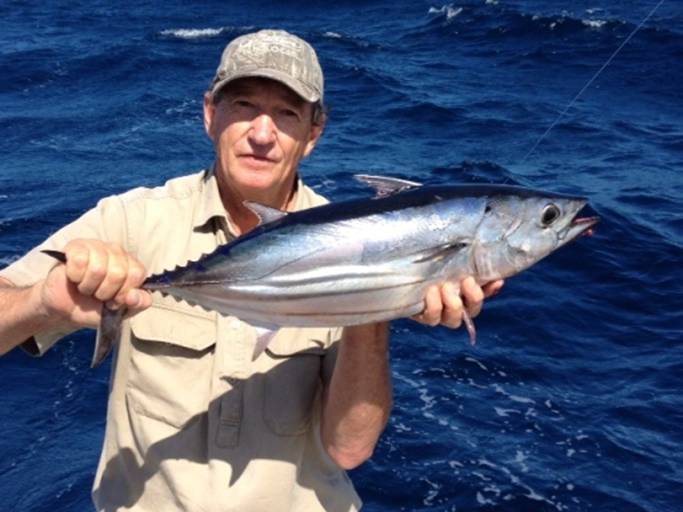 heaps of bonito, dollies and skip jack tuna all around 5 kg. All good fun especially when you have 4 tuna hooked up at once

I’ll bet it is! Good report, Rodda. Leo U out on Greg Radford’s marks last week. I’m told by a few canny clients that NSW FADs are pretty ordinary, design wise. Apparently in Hawaii and Florida the ropes have attractants at different depths. That brings in all kinds of fish, including tuna and marlin. Whereas ours are just a buoy on a rope: 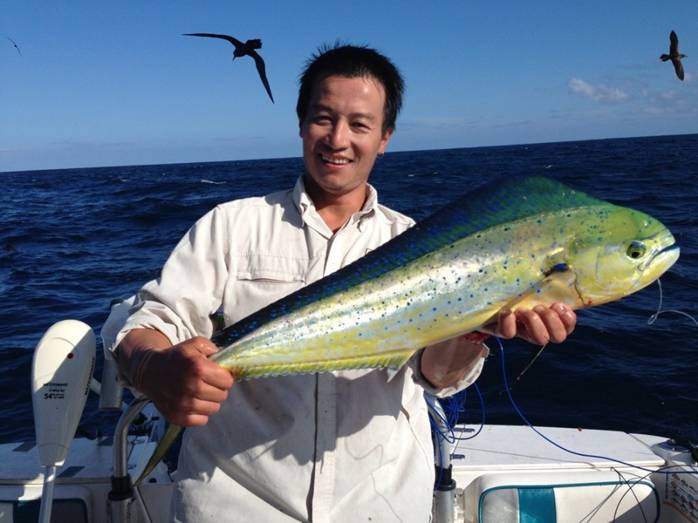 Hi Andy, went out to the trap marks that you posted. Few boats out there, but nothing too outrageous. Everyone was taking turns with their drifts, and a few fish were landed. We didn't see an undersized fish, and the biggest was 90cm. Kept a few for a feed and kept catching them for fun. Dollies are a great sport fish on 6lb line!

Too right they are, Leo. They saved the day for us on Thursday. By 1.00PM we hadn’t turned a reel, despite visiting the Twelve Mile and Browns (too much current.). So back in to FAD 19 off Botany and as we came off the plane mahi could be seen jumping out of the water everywhere. Two minutes later and new crew member Callum was on to his first one ever: 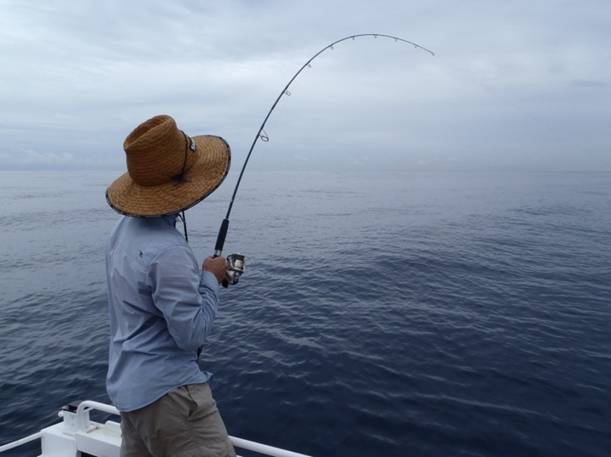 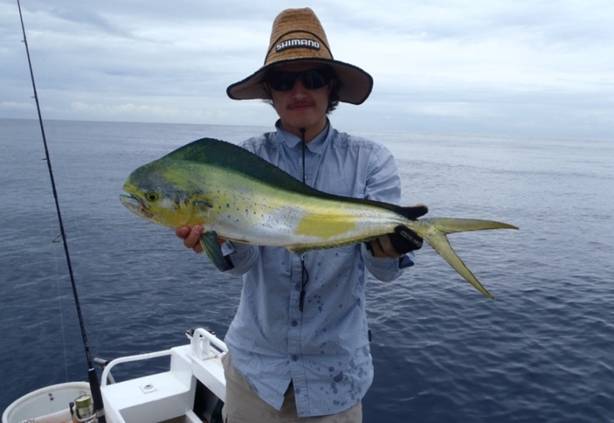 The lads were having a ball and I wanted to maximise the sport available from these high flying puppies so geared down to my new favourite mini popper, the Kingfisher Poppet: 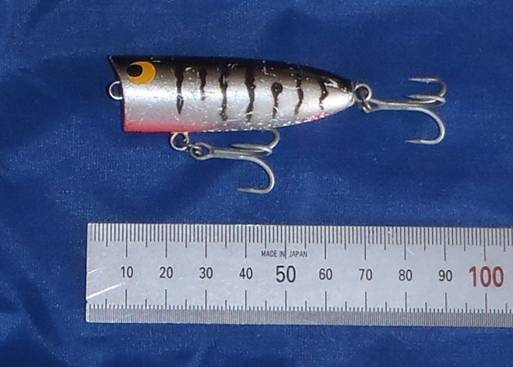 That one worked a treat on 3 kilo, you can see the FAD in the background: 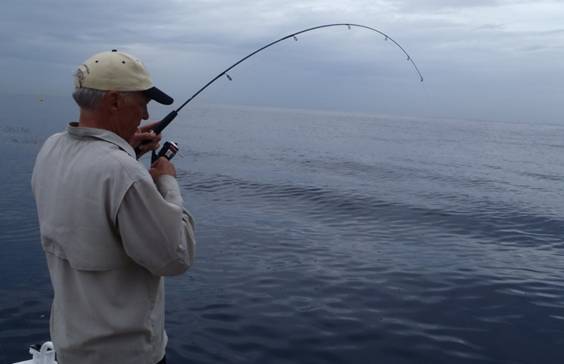 With a chiller bag full of keeper mahi everyone’s mood had lifted. But with the team still hankering for some arm stretching, off we went jigging. The place was on fire, Jay opened the batting: 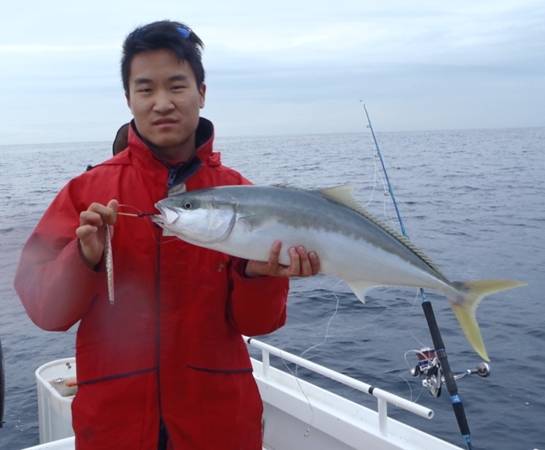 Note black tape on the boat rails in the background. 65cm apart so you can measure your king and decide whether to keep or return - without the bother of a brag mat. Here’s Callum getting introduced to kingfish jigging: 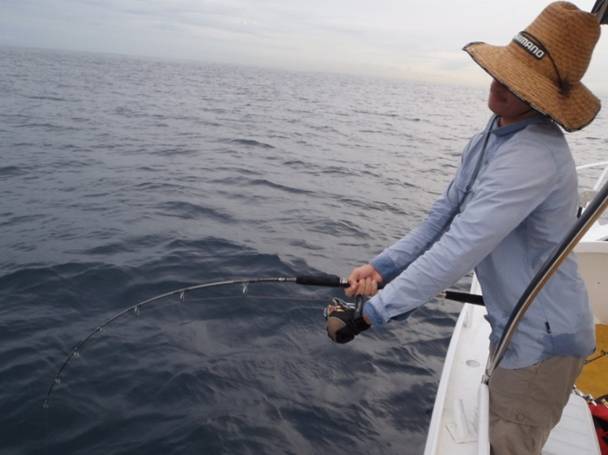 As usual it was me, who won the Oogly Of The Day Award: 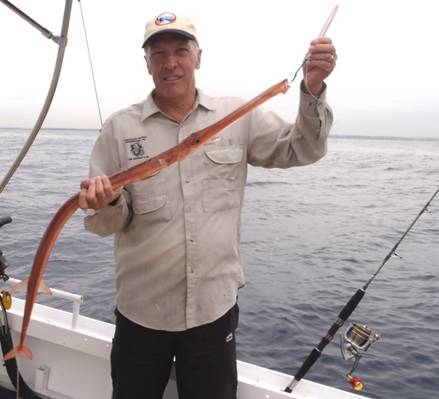 Flutefish, he went back over the side. Darryl closed our innings with a chunky 85cm: 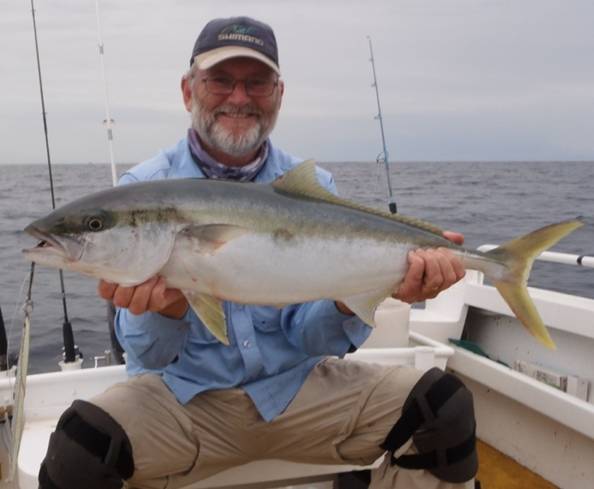 What a great afternoon. By 3:00PM we hadn’t turned a reel, by 4:30PM you could barely lift the chiller bag. On the topic of jigging, so much confusion on the Facebook page after I clumsily mentioned ‘the jigs’ are back in stock. Just to explain, so many readers had back orders and were hoping for delivery before Easter. All okay. 4000 jigs arrived at the end of last week, and all back orders had been sent by this afternoon. Here’s what came in:

Firstly, 420 gram 330mm jigs. These have a hook matched to the centre eye level and  are 5 jigs (different colours) for $60, including delivery anywhere in Australia.

Next size is our most popular knife jig, the 250 gram. These are supplied with cord and hook (like all our jigs) have a blood shot eye and lumo belly and cost $70 for 10, including delivery. They worked well for us last Thursday:

The 100 gram jigs have been the big hit of the summer. It sounds self serving but I don’t mind telling the story because usually, I’m the slowest to hook up on the jigs. The first day we used these at the Peak my hook up rate compared to the rest of the crew was downright embarrassing. And at one point I actually tried to conceal the bent rod (!) 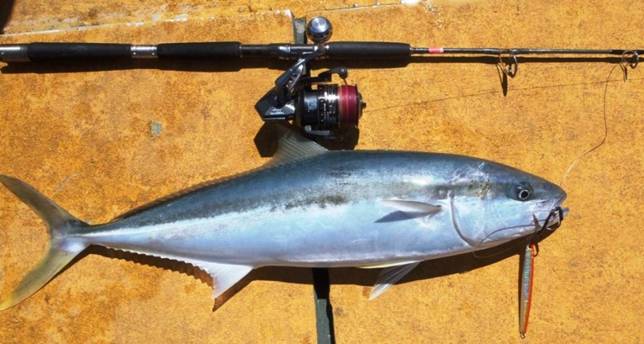 100 gram jigs are $55 for 10 including delivery anywhere in Australia. We include a free jig bag: 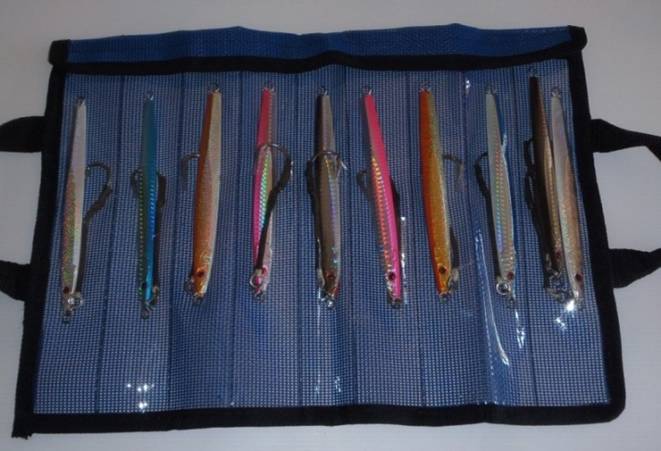 Our smallest jigs are the 40 gram models which I actually haven’t done much fishing with, over this summer. But the guy who makes our downrigger weights is a very expert fisho and fanatical micro jigger and he’s been scoring some incredible results with mini jigs, including Harbour jewfish. $35 for 10 (5 different colours) including delivery, that’s gotta be a good deal: 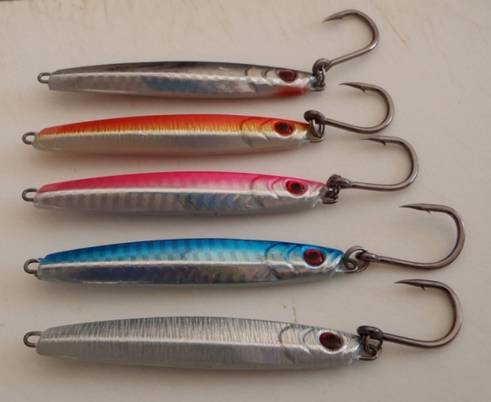 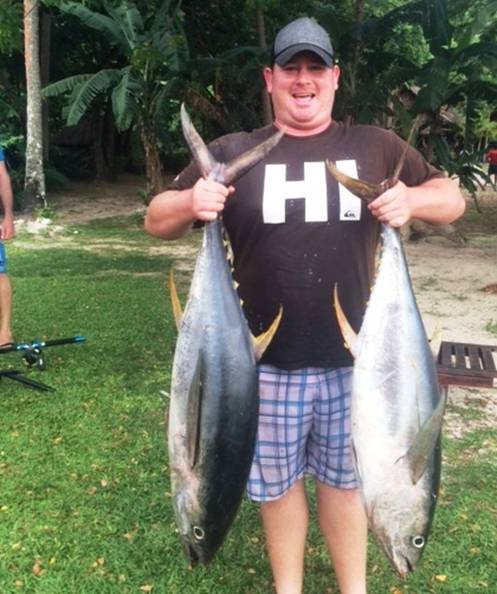 G'day Andrew, currently in Fiji and went on a charter. We ended up with a dud guide who ended up being a surfing charter guy!!! After a long day in rough seas off the coral coast we were empty handed, until we noticed some birds. At closer inspection is was a school of yellows. This saved the day! We took them back to the hotel for some fresh sashimi and tuna steaks. 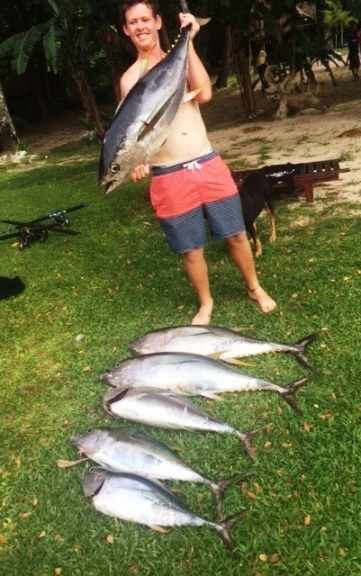 To politics, and we have so many issues to confront with the endless creeping war on our boating and fishing rights and it’s human nature, with our busy lives, to seek the easy answer. So when some outrageous chunk of green tape or red tape gets jammed down our throats and some good hearted fisho somewhere proposes an online petition or something that only involves a mouse click by way of protest, of course we’re relieved. But the sad reality is that those who want to restrict us have a pretty good handle on human nature themselves. Single university greenies with stacks of time on their hands and free photo copying, telephone, and internet access know they are already streets ahead of the average Aussie fisho - who has to juggle work and family responsibilities before he even gets out on the water. That’s why they actually promote submissions on contentious issues. In many cases – as we saw with the disgusting South Australian marine parks rort, the cards are stacked. A Greenpeace member in California, who couldn’t find Adelaide on a map, had the same voting power as an SA angler. Meaning the dice are weighted before they are even rolled.

What can be done? Firstly, we have to get results oriented. Submissions, petitions, even public protest meetings not only have a poor record as regards results but also leave us – and I’ve done all those things – with the feeling that we’ve had a go. We’ve done our bit. But at the end of the day, what have we accomplished? Which is why what is happening in 2014 is so exciting. Anglers right across the country aren’t waiting for their representatives on the Fishing Advisory Councils or whatever to act on their behalf. They are out there taking charge of the issue and accomplishing more for our sport than the last ten committees combined.

Case in point. If you’ve been reading recent fishing reports you would know many fishos are ropeable about the Coffs Harbour boat ramp. At the same time NSW Maritime Minister, Duncan Gay is wasting hundreds of thousands of dollars on his life jacket ads and uprating inspections and fines of fishos on the water, boat owners are literally risking their lives launching and retrieving at what is supposed to be a major boating holiday destination. We’ve all seen the pictures. Boats up on the rocks. Blokes trying to save their boats from smashing into the rocks by jumping over the side with the propeller still turning. And to cap it all off, Brett Vercoe’s video showing just one hour of mayhem at Coffs ramp two weeks ago. If you haven’t seen it, check this out:

Now there is one thing our rulers fear, and that’s bad publicity. Brett’s video fired up the online fraternity in a huge way and eventually was shown on Channel 9 news, last week. Two days later I received a very welcome e-mail from the Coffs Harbour Council engineer, as follows:

Thank you for your e-mail addressed to the Mayor regarding the Coffs Harbour Boat Ramp.

Please find attached a copy of a report being considered by Council tomorrow night which outlines our course of action in relation to the surge and sand management issues at the boat ramp. …I can additionally advise that today a dredging contractor commenced clearing of sand from the boat ramp entry area which has been difficult to dredge with our long reach excavator. The dredging contractor will remain on site until just before Easter.

And that’s what happened, thanks to Jim Fleming for the pic: 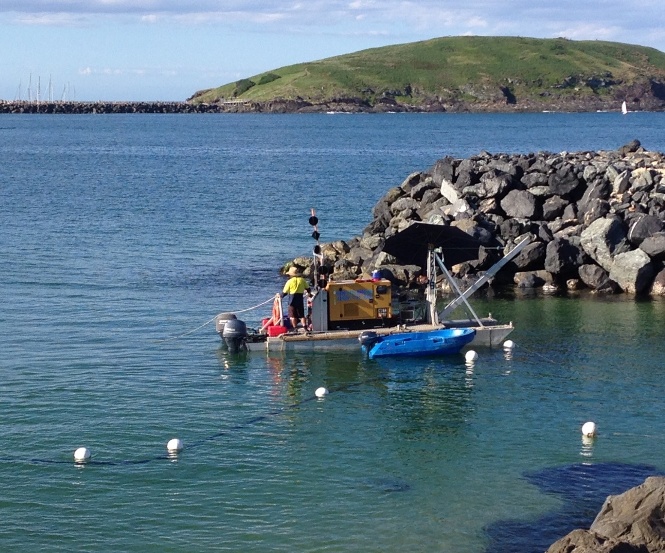 Now that’s how to do it. Forget petitions, submissions, raising topics with the Minister, leaving it to our fishing representatives and the like. Just get out there and capture some footage or photographs showing the extent of the problem and upload to Youtube. If you don’t want to do that, send the pics or film to me, and I’ll do it. I’ll make enough noise for us bothJ

And to prove the Coffs Harbour turn around wasn’t a fluke, hasn’t Les Palmer covered himself in glory over the last few weeks? A Coffs Harbour type story was happening at South West Rocks, because boaties wanting to put to sea had to cross the Macleay Bar to get there. And if you haven’t done it, let me tell you, it can be a white knuckle ride. While at the same time there was a perfectly safe all weather ramp at Laggers Point, on the eastern side of Trial Bay. Yet the ramp was closed to most boat launching – simply due to the arrogance and personal whim of the National Parks manager there who should have been transferred out of this popular holiday spot years ago. Les’ dogged and relentless campaigning has borne fruit with the ramp now open and being used by boaties for safe launching. 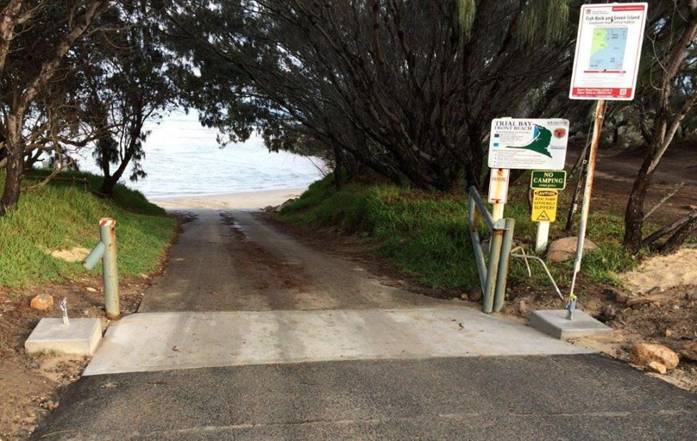 Les, your accomplishments on behalf of fishos are extraordinary. Thanks so much, mate. 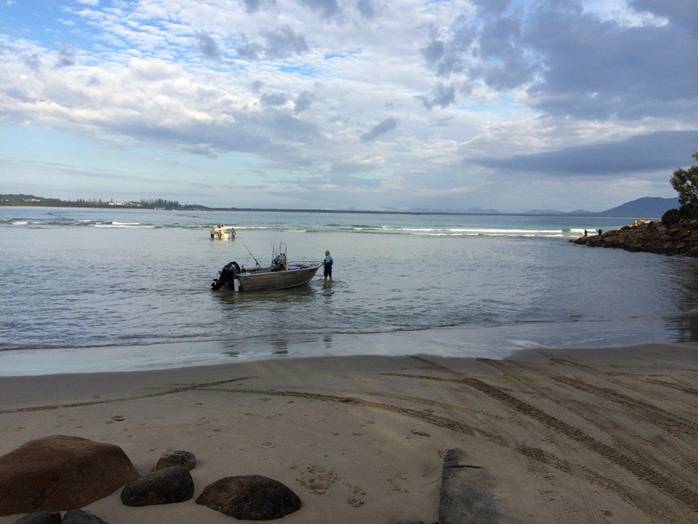 If you know of some local outrage where red tape, green tape, or political correctness is putting our sport at risk, please get in touch? Because you don’t have to put up with it. We have the numbers. And more importantly, we have the votes. What we don’t have is the organisation and the tactics. Thanks to pioneers like Les Palmer and Brett Vercoe, that’s changing.