Spring time is kingie time and kingie time is happy time, everyone knows that. Dave Rowbotham got the message on Saturday: 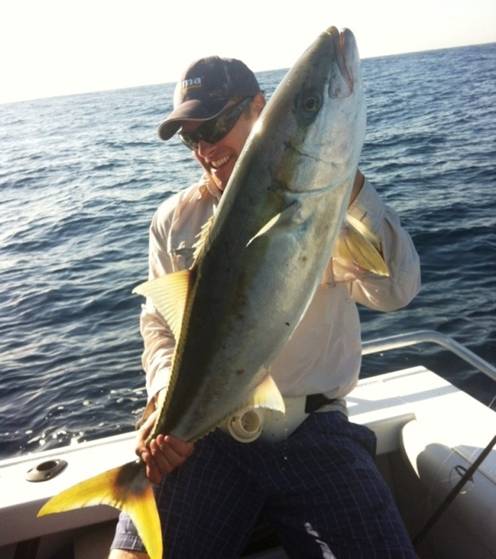 Hi Andy, it was patchy today but we found a couple.

‘Found a couple.’ You do a nice line in understatement, Dave. Luke Desylva downrigging some beaut yellows inside. More proof we’re going to have a big big summer of kingfish: 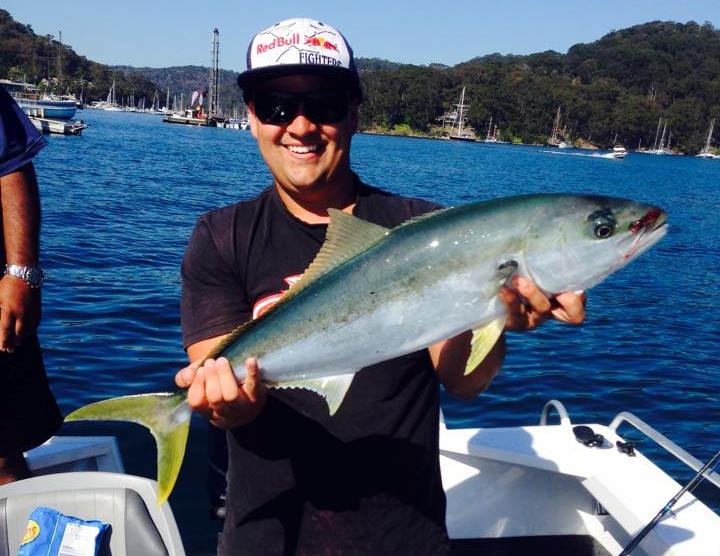 Second weekend in a row smashed the Pittwater kings Andy, this time all falling to live yakkas unlike last week was live squid. Biggest going 85cm.  Water temp was 21.1 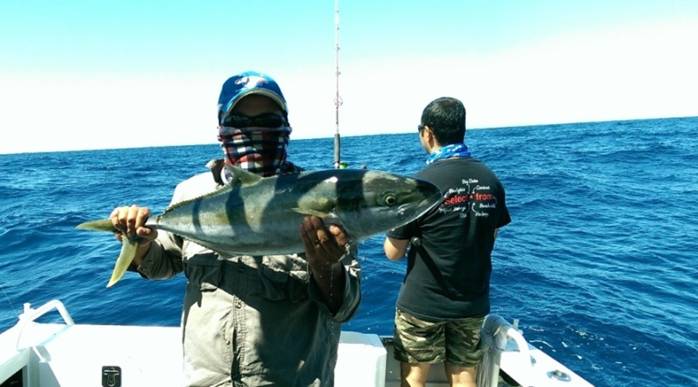 Andrew, long day but well worth it. Manage to hook up 90cm Kingie at 12 mile yesterday with one of your 100gm jigs.

That king is definitely worth a long day’s jigging. Ryan reports on a friends’ fish. Well done, Cody: 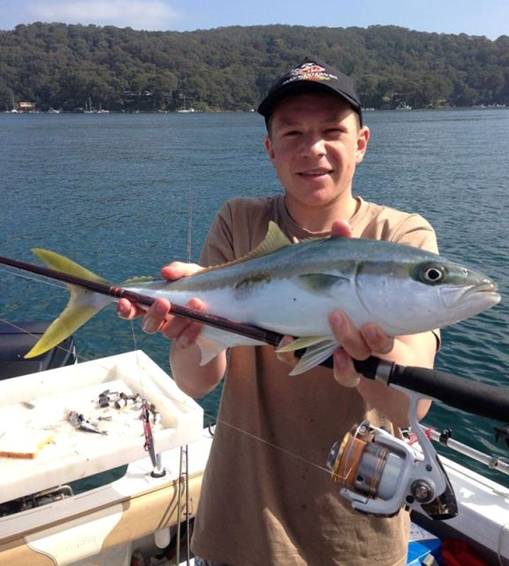 It’s not all kings. Which is sad. J But Tameem went squidding for a ripper result: 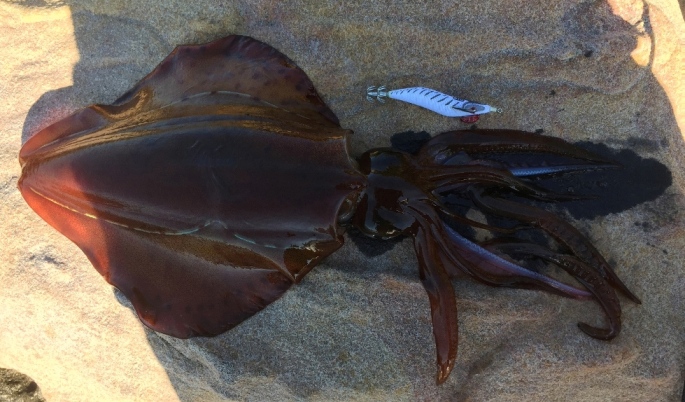 Hey Andy, I went for a squid today with these 4 caught at La Perouse the biggest going 40 cm hood followed by a 20 cm, all caught with the white DTD squid jig pictured. 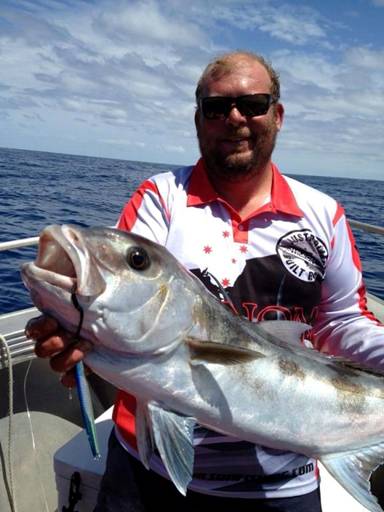 Hi mate its Greg from Double Island Point Fishing Charters. I thought you'd like this pic of a nice QLD Sampson I caught on one of the 100g jigs I got from you the other day, the jigs have also caught plenty of AJ's from 5-10kg but no stand outs yet and some pearlies. Probably need to order more soon because I've already lost a couple to freight trains! 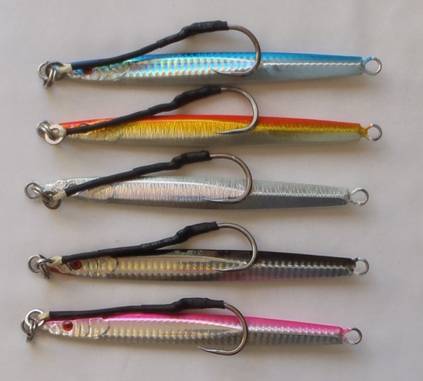 Needless to say the weather’s been a bit iffy this spring, so you’ve got to triple check the forecast. Tim Morrow on Monday 13th: 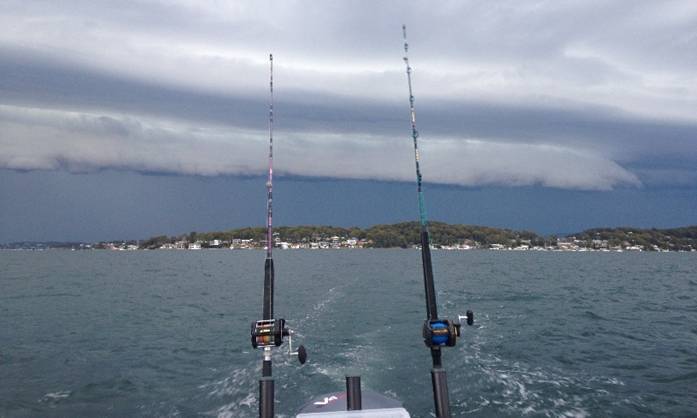 I went for a jewfish session in Lake Macquarie yesterday afternoon but when I seen the storm front coming I had to let my livies go and race it back to the ramp.

Scary, dude! Pack the carbon fibre rods away. I see there was 15cm of snow at Blackheath west of Sydney on Tuesday. Where’s all that global warming the greenies promised us? Deep dropping, and Ian Williamson fished the Shelf off Eden: 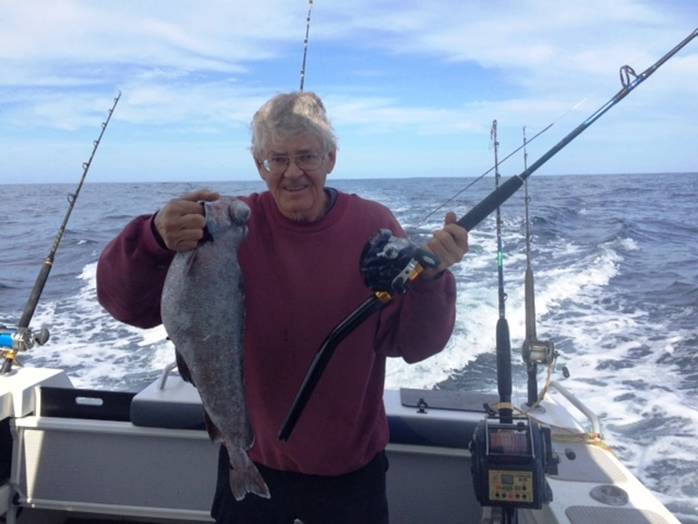 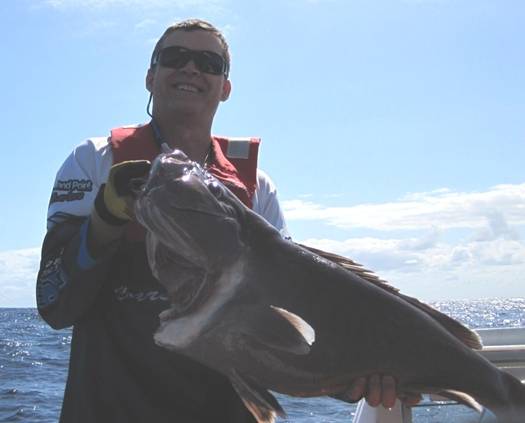 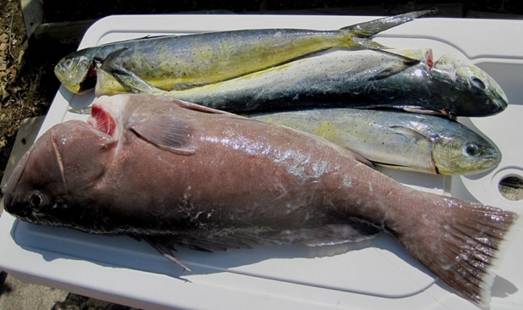 While we’re talking about 400 metres down, check this out. Bob Greenhill sent me a magnetic map of Browns Mountain. Smaller peak to the north west worth a drop, too: 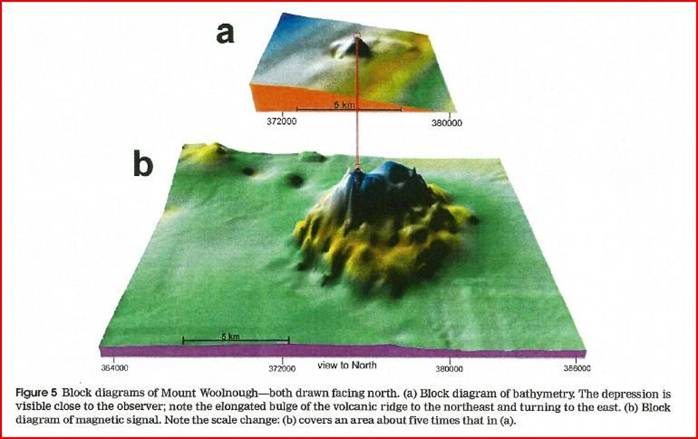 Thanks for the intel, Bob. To tackle, and the single biggest performance upgrade for your reel is switching factory synthetic washers to carbontex. I finally put together a how-to video on the simplest way to do it. Yes, a punch kit speeds things up but it’s not essential:

Jim pleased with his reel knob upgrade on two favourite Shimanos. This is the second best improvement you can make to your reel, behind  carbontex washers: 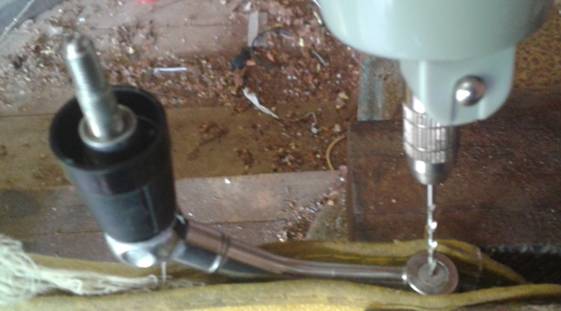 Replaced the reel knobs on both Shimano Baitrunner and Sustain reels with your large knobs. No screw to easily remove existing knobs, and no raised nipples to file down - so used a 2mm drill bit to drill into recessed shaft. Then tapped out with a punch to enable new knob to screw on. Beautifully Optimized!! Thanks again, Jim 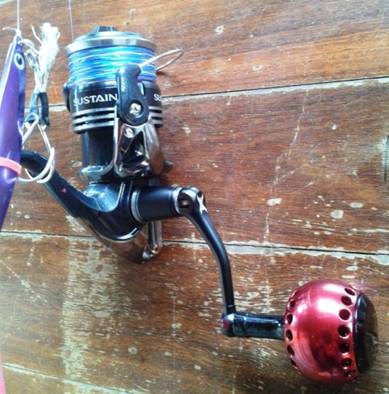 Yep. I couldn’t go back to the factory handle Jim, not for jigging anyway. Michael Tran has a question about micro jigging:

what size outfit do you recommend for the 40g jigs? And what type of retrieve do you use? 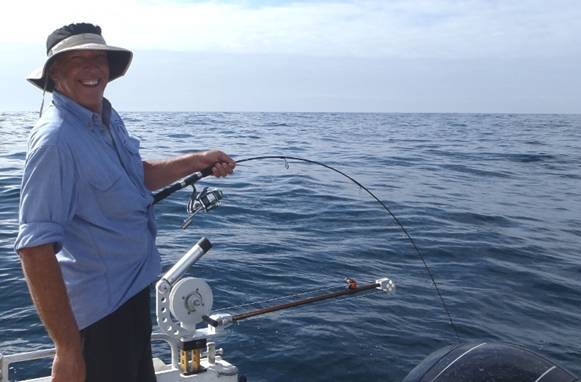 I’m using our 6 kilo $95 rod reel and line combo. The load profile is outrageous but the carbontex drags and the parabolic profile of the rod (the butt bends too) soaks up a lot of load: 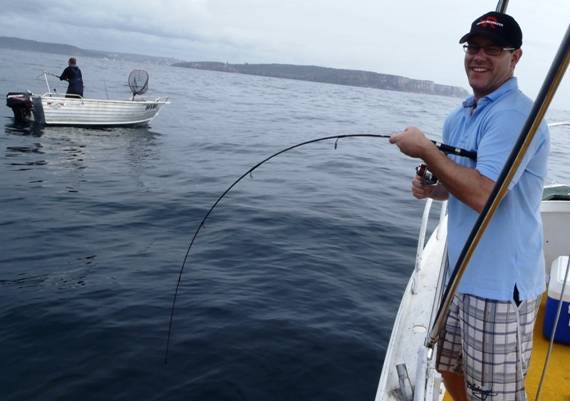 With true micro jigs like 40 and even 25 grams the rod selection is crucial. Because anything too stiff or with a progressive taper doesn’t load the rod, and store energy on the upswing. You want the jig to flick up when you stop the lift because micro jigging is very different to mechanical jigging. Here’s a good video on appropriate technique:

You’re not moving the jig fast through the water column, you’re staying in a narrow strike zone for as long as you can. It’s a bit like the bass flipping they do Stateside. I gave it a try last week when Andrew W invited me for a run on his bass boat out of the Haven, at Terrigal. He located a reef in 32 metres up off Forrester’s Beach. Some good looking bait balls got us motivated: 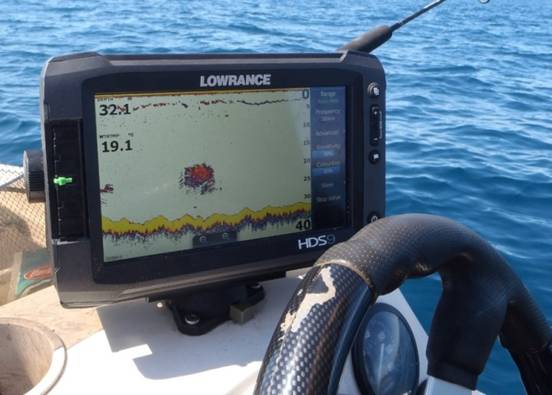 40 grammers slow jigged were the go. At one point we were hooking up every drop: 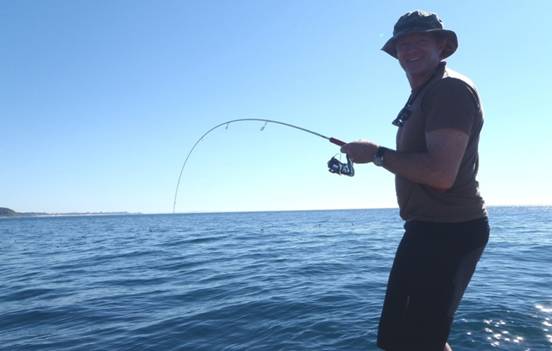 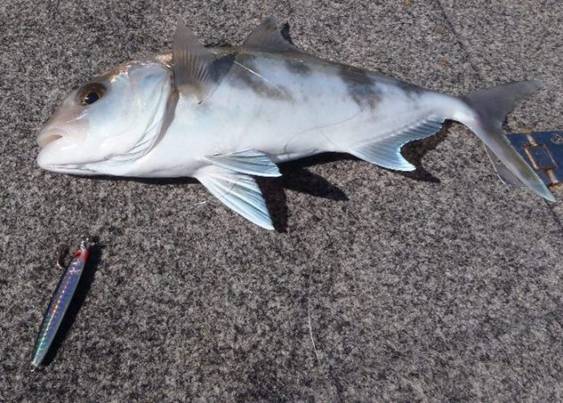 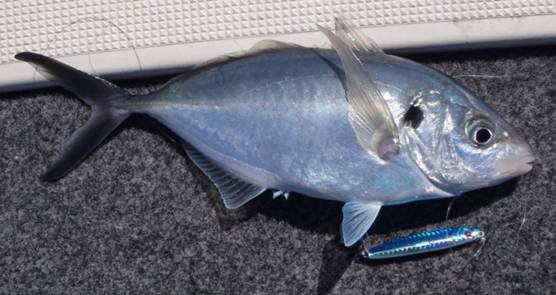 On the light gear these took off like a top fueller dragster. Everything went back over the side, we were just fishing for fun. Had a ball and can’t wait to do it all again. Steve says icro jigs work in the deep north too:

I thought these little jigs might go well on 20lb braid and a 4000 size daiwa threadline for things like fingermark, nannygai etc in 30-50m of water here off Townsville. I bought some tricked up maria and other Japanese jigs but at $15-$20 each it will get pretty expensive if the doggie mackerel are on the spots like they sometimes are…I have lost up to 30 7”gulps and 1oz jigheads in a session on some days. They can be ravenous.

Thirty SPs and jig heads lost in one day. That’s gotta hurt but – a good kind, of hurt. Mark Way from Kiama GFC sends word of this one taken last week. Weekend forecast pretty good so get out there into them, lads: 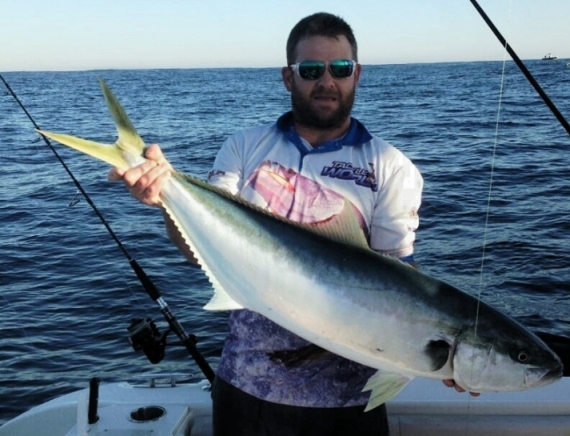 Nice Kingy caught on 12 mile, I presume at Bermagui that was 110cm. I'm old school and go on weights, from pic it appears to be around 15kg? Kingies are on the bite in Sydney and I would assume Banks and Minnamurra would also be the go!

Diver Scott Willan finds a wreck 28 metres long, sitting upright in 73 metres of water, off South Head. A too-generous client gave me the marks. I’ll check it out and have an update for readers in the next weekly report:

Not sure who sent me this one but it’s pretty good. Eight kilos of drag pulled the little spud up just before he reached the cross street: 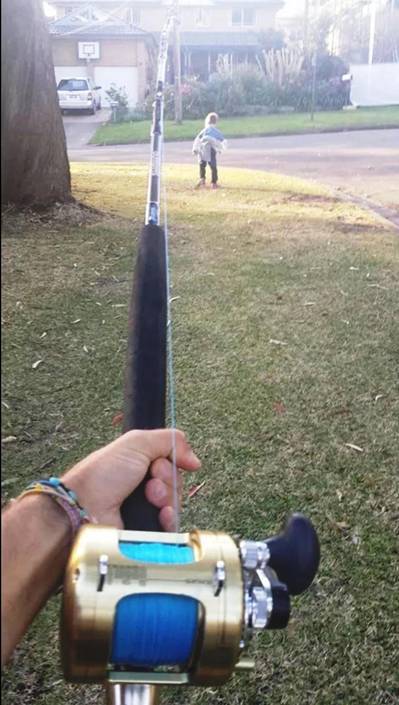 To politics, and stacks of feedback from the last fishing report on the topic of closed saltwater lakes and their mismanagement by local greenie run councils. Here’s Lake Conjola’s entrance (on the NSW south coast) before council allowed 3000 homes built upstream – then pretended it was a natural environment which can’t be interfered with, by man: 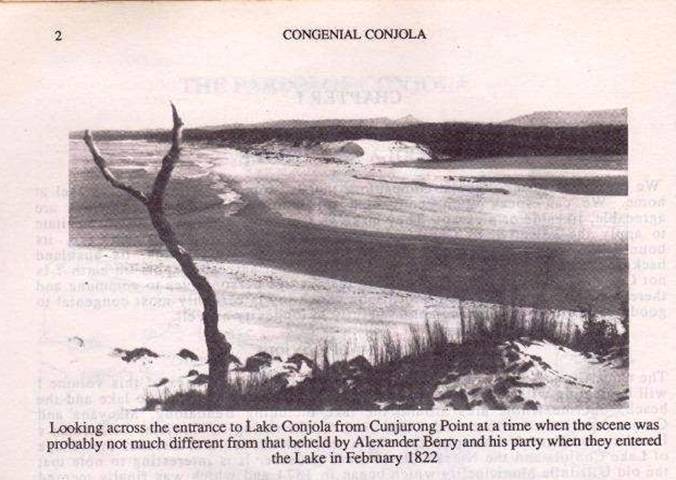 Contrast and compare with the sand build up at the entrance now: 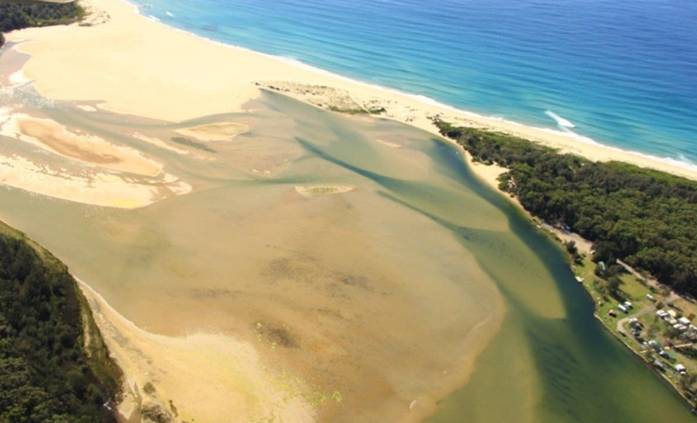 The story is that, like with national parks, the Green-stacked committees who control management of these lakes have an anti human, anti intervention agenda. On land this has led to national parks infested with foxes and pigs being regularly burnt to a cinder because greenies drag the chain on feral pest management and hazard reduction burning. It’s a similar story with these shallow saltwater lakes. How can they be ‘natural environments’ when there’s farms, housing developments, flood mitigation barriers and the like upstream? When a flood occurs, vegetation is either submerged or washed into the lake and begins to rot, giving off gases which reduce oxygen levels in the water. If a giant sandbar has built up at the lake entrance preventing the deoxygenated water from escaping here’s what happens: 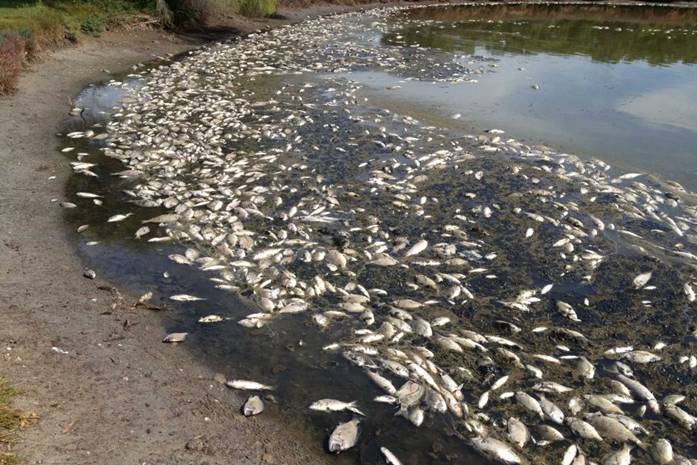 Vasse Estuary in WA, last year. It’s happened three times in the last five years, according to the ABC:

And here’s how local Greenie Goose Greg plans to ‘address’ the problem:

The City of Busselton says poor water quality in the estuary has been a problem for some time. The city's environmental services manager, Greg Simpson, says a taskforce has been set up to find a way to improve it. "It's been a particularly difficult issue, there's a number of agencies all with different responsibilities," he said.

Right, another taskforce. That’ll fix it, Greg.  Keep this in mind next time you read of Fisheries busting somebody for too many lines or keeping undersized fish? A couple of undersized fish, thousand dollar fine. 7000 dead fish (in Vasse Estuary), another taskforce of do nothing greenies. Lads, in closing, I know I sound like a broken record. But thanks so much to those of you who send in pics and reports for others to enjoy. I get the nice feedback the real credit goes to those blokes considerate enough to send an email as to what’s happening on the water.