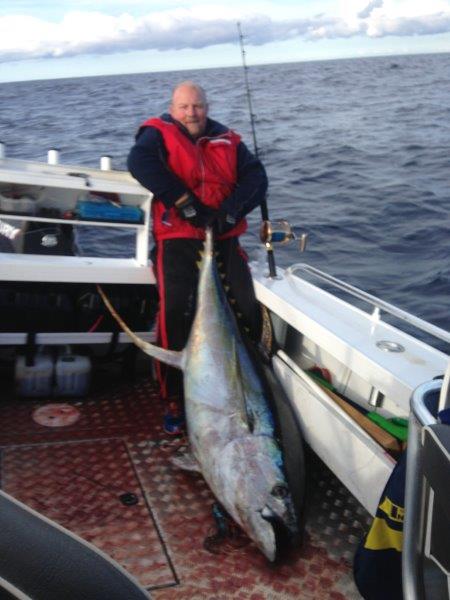 Had a great day on the shelf last Sunday 15th . Early start see picture and the day ended with a great fight from a great fish 88 kgs of Yellow fin not my first but the best. Never seen a fish fight like it he tried everything. After 1 hour and 45 min I felt sorry I had landed him.

I know how you feel! When I decked my big sambar stag I felt ashamed of myself. But its hunters and rec fishers who protect the resource, and one long liner catches more yellowfin annually than the total recreational take. Makos aplenty out wide:

Thought you may like this one cobber since it seems to be mako month, this guy went 232kg. Long line hook in his jaw too! Cheers Rossco.

‘Mako month’, I like that Ross. If only every month could be Mako Month, what a happy world this would be. 232 kilos, that’s a serious shark. Well done. Makos and gemfish go together like beer and biltong. Matt Loraway: 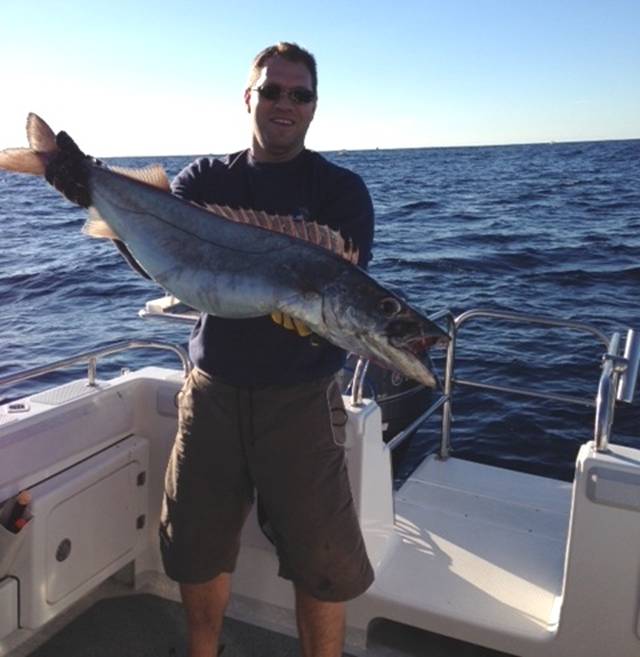 Managed to catch some Monster gemmies coming up from Browns ….biggest I have ever seen… on BIG baits and hooks. Very fat and heavy, filleted slabs more than 2 inches thick…these were last week before the big westerlies hit!

Bleedin’ heck, you could throw a saddle on that thing! Good forecast (at this stage) for the weekend, Matt. The gemfish run is getting bigger every season so let’s get back out there soon. (I’m going tomorrow.) Arman is one of Sydney's top fishos who drops everything when the fishing's hot and goes for it - a proven path to success. He's also a proud dad to young Reece, who I've seen fishing offshore since the time when his head barely cleared the gunwale. Now the lad has achieved an incredible capture: 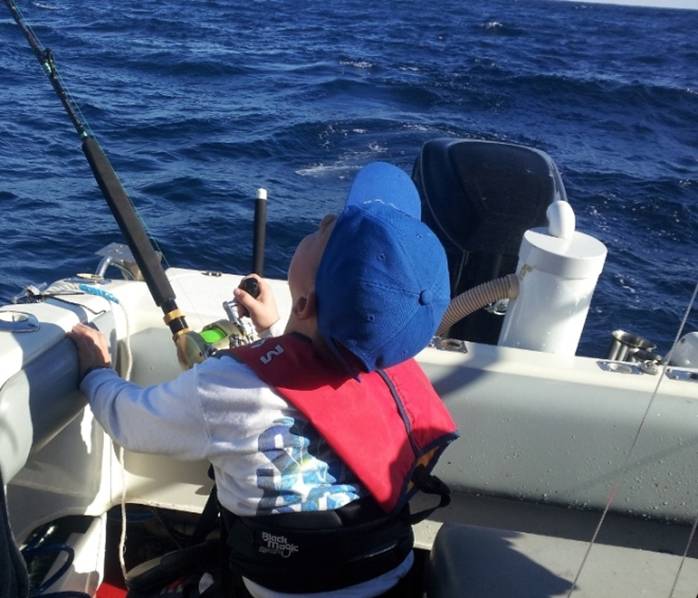 Towed Mr Magoo down to Ulladulla, and ran out about approx 49nm east we had a four way hook up, with Reece getting his first bluefin, weighing,44.5kg on 15, not bad for a nine year old & Adam getting his first as well going 40 on twenty four. High fives all round. I especially like the photo when Reece throws his head back after the fish takes another run and he loses the line he worked so hard for. 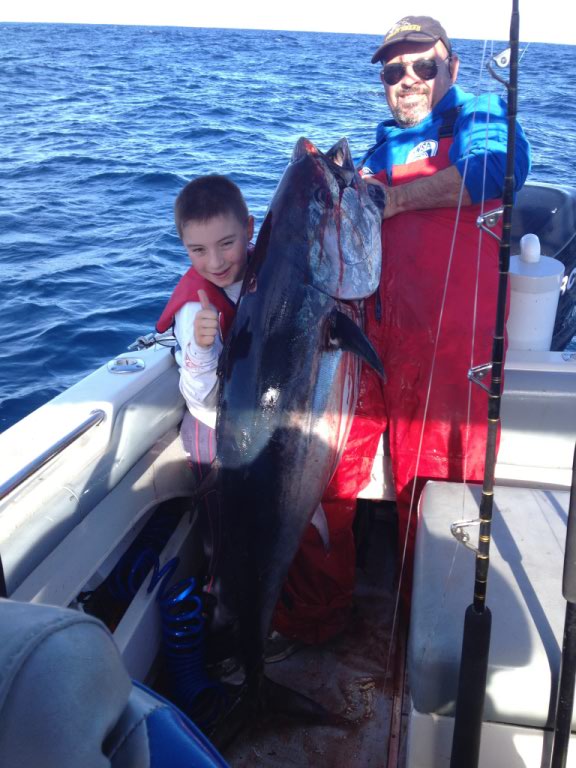 He he he. Thumbs up to you too, Reece! What a magnificent fish. Scott Tyrell with two nice bar cod from the mid North Coast: 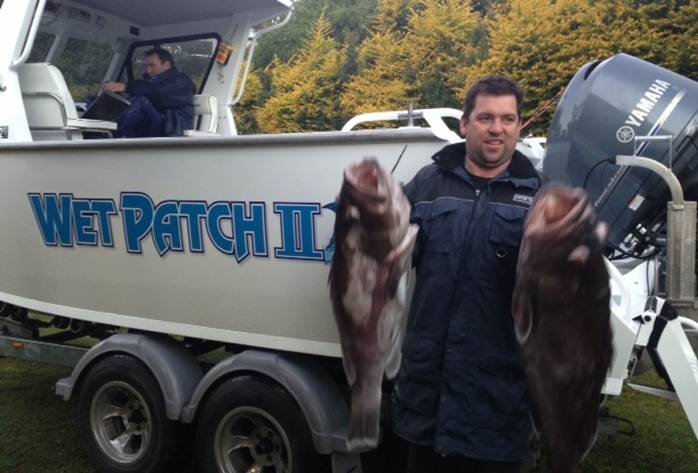 Andrew, Murray, Ben, Andrew and myself gave the shelf at Port Mac a go today and got onto a few good bar cod. Conditions should be perfect by midday tomorrow so I will send through an update. We also bagged a good catch of Pearlies and Snapper with the odd jacket as well.

Good news Scott because if all goes as planned I’ll be fishing up your way on Sunday with my mentor, Master Co. So named because he fell overboard from his dad’s trawler in Moreton Bay and was raised to manhood, by a school of cobia. Think I’m joking? Just watch him eat a blue swimmer crab – whole. J Nick Chee sent in a killer pic from last summer: 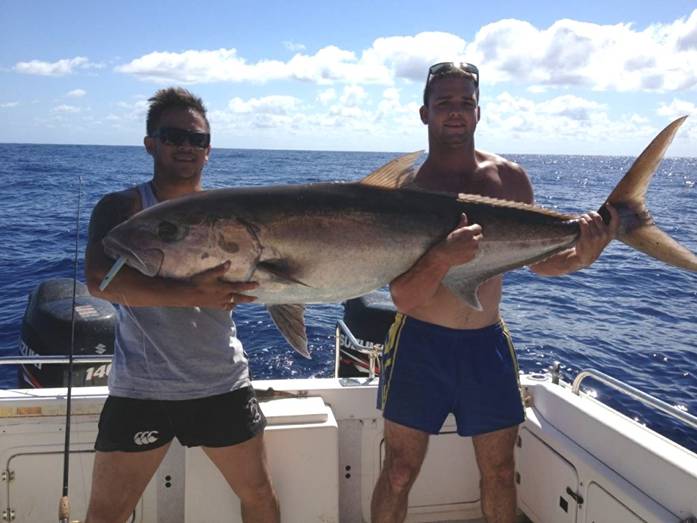 Strewth! Another look at Nick's incredible amberjack. Maybe I should get some pink Crocs too: 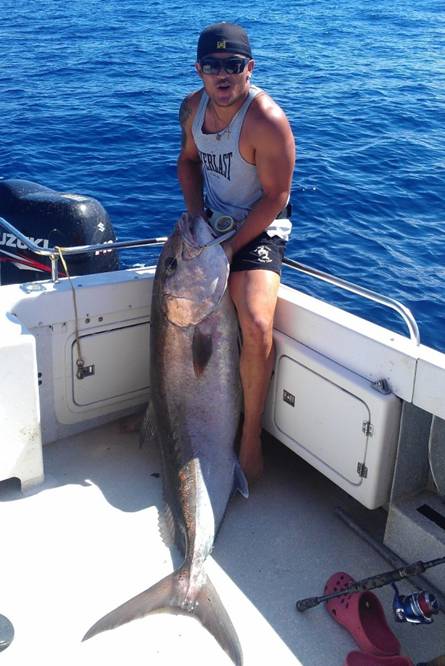 Just fantastic, Nick! John Holt sends in a top offer for our readers. These work well: 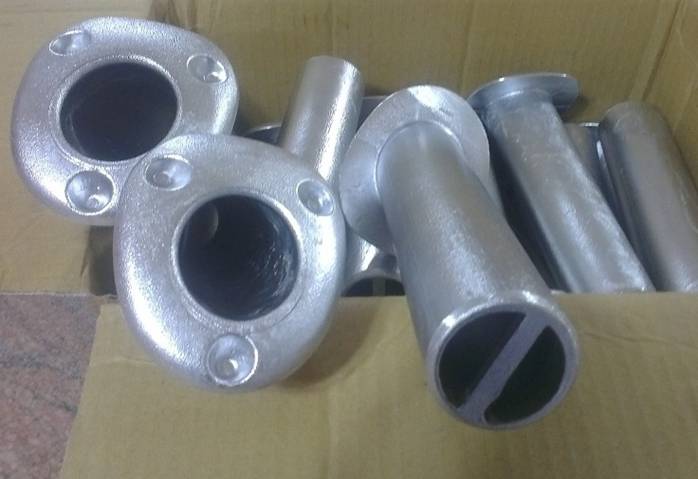 Hi Andrew, I have managed to source these cast alloy rod holders they are one piece and can be ordered with or without holes. Perfect for electrics or big game reels. At 20 dollars each they are worth it.

Too right they are and thank you, John. Peter G pleased to see leatherjackets on sale in the supermarket: 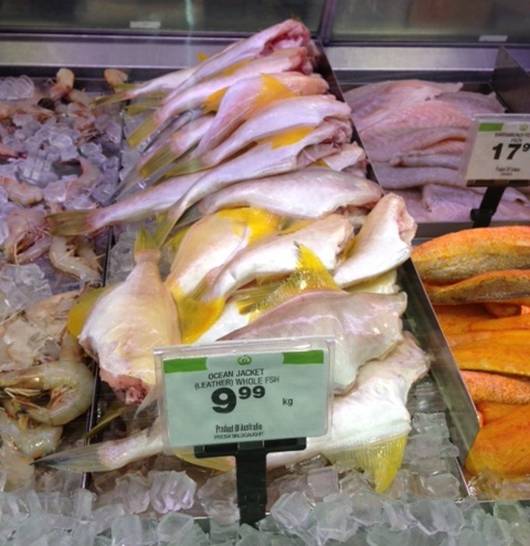 In Woolworths at Salamander Bay - apparently one of their best sellers. Lets lobby for a ‘national eat a LJ day’ to drive up consumption.

But mate what would happen, to our jig sales? J Bruce Rayment has a good offer for readers: 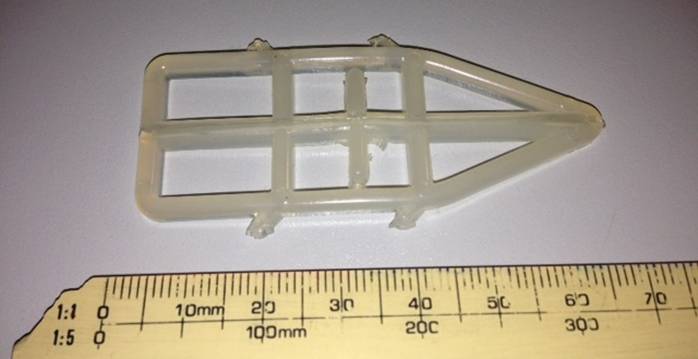 Hi Andrew, do you mind publishing this in your next email? We bought a bulk quantity of unrigged Squid Frames a couple of months ago, split them between some mates and have a few left to get rid of. They are the perfect size for using with boxed frozen Californian Squid. Pack of 5 for $20, I only got 5 packs left. If anyone is interested in them, email me at brayment@bigpond.com.  Regards, Bruce.

No problem! Get yourself a new ruler if there’s any markup, Bruce? Jaryd happy with his replacement reel knob: 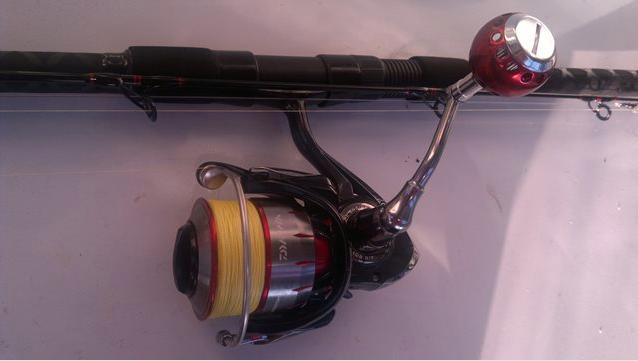 Hi Andrew, Thought you might like this pic, the red looks pretty sweet on the Daiwa Ballistic. It’s a huge improvement from the T handle it came with.

Glad you’re pleased, Jaryd! I have them on all my reels, just couldn’t go back to the factory plastic. And they’re not expensive. 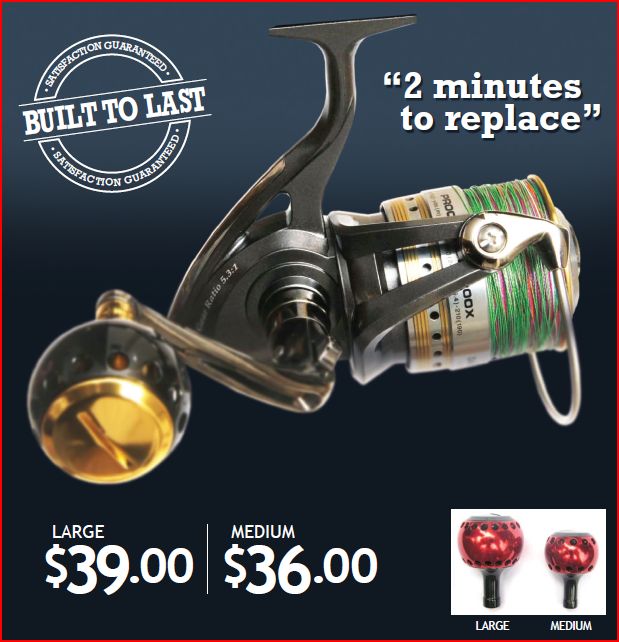 Trevor’s a fan too:

I have just ordered one “custom knob” for my Daiwa Ballistic 4000 spinning reel, after I saw one of our fellow kayakers, (Vic Kayak Club), post one up on our forum, and reckon they looked great so I just had to have one. Please send me a RED one in the medium size.

Will do! Mark Milonas has a boat query: 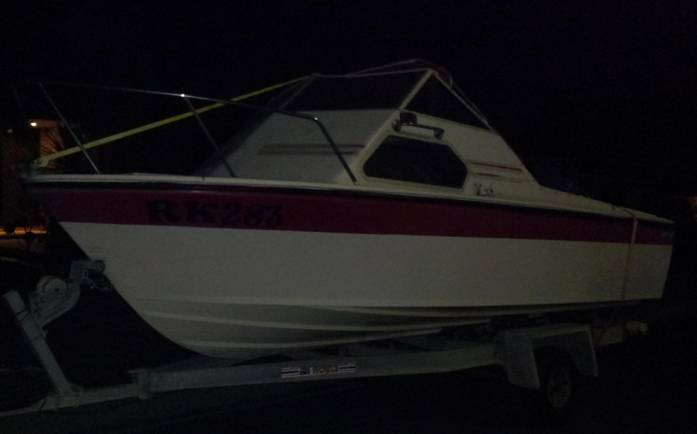 I appreciate and look forward to your e mails every month. Just wanted to ask if you have ever come across this boat brand before as it has no tags and no one seems to be able to determine make.

After a stack of sleuthing on our Facebook page, Ross Ireland cleared things up: 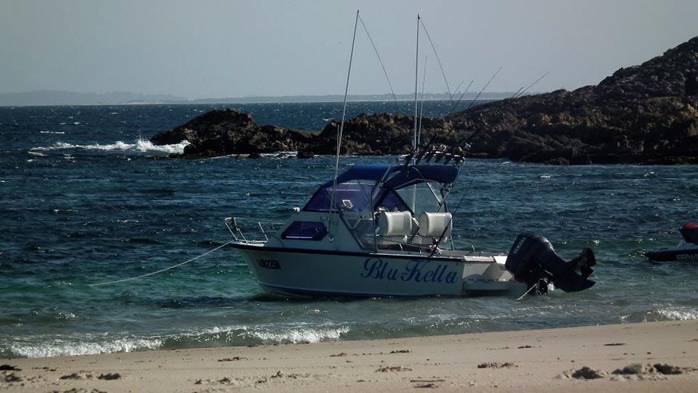 Pretty sure your mystery boat is the same hull as mine cobber, i maybe wrong, it happens a fair bit! As i mentioned, the stern and chines are identical, side window are the same, front are the same. The hull is a Keller Craft, not a common hull, it is American, little on the net about them. Really great boats!

Good one, Rossco! I usually let mine float but that’s just me. Top report from Ed Aspden, two record fish taken off Sydney:

Hi Andy, got out on Saturday in horrendous wind to Browns aboard Smartbill. We dropped for gemfish in the morning and started a trail. Hooked one decent gemfish within a minute or two and by the time it was at the boat there was a shark in the trail. Sam's daughter was aboard so we decided to try and get her the 15kg Australian record. After around 40 minutes of fighting time Shantelle had a nice Bronze Whaler to the boat and we got it aboard and despatched it. We went back for another drop and decided to try again for another shark species. The drop produced a gemfish and by the time it was at the boat we were hooked up to a nice Mako: 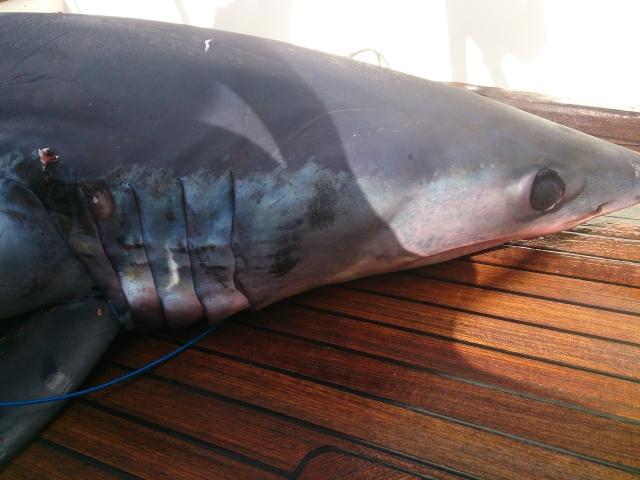 No jumps unfortunately and the fish went deep. Some great boat work by Sam and the rest of the team and a missed gaff opportunity resulting in a lost gaff from the mako biting cleanly through the 10 ton gaff rope and descending once again. The fish eventually came up and this time the gaffs found their mark. 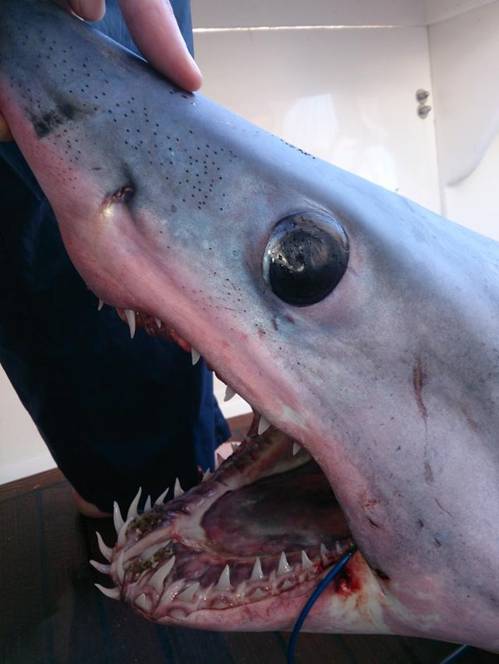 We scooted back to Botany in 20kts plus of westerly to weigh the fish. As they were record candidates we took some time measuring and taking photos. The Whaler went 88kgs and the Mako was 90.5kg. Great day at sea in spite of conditions and a clear demonstration of what teamwork can achieve. 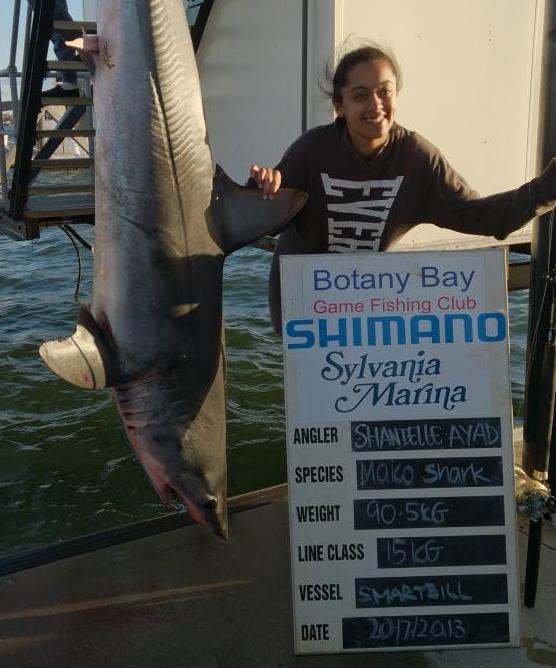 Great story! The wind was blowing so hard on Saturday the whole crew deserves a medal. Congratulations to Shantelle and thanks sincerely for the great story and pics, Ed. Kevin kicked off his retirement with a trip to the outer GBR: 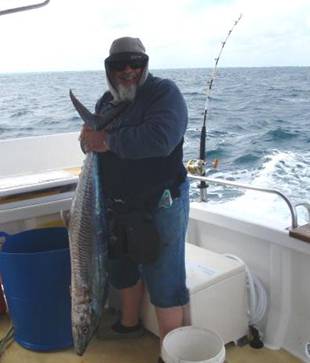 Some pics from the reef trip to the Capricorns a couple of weeks back.  The Spaniards were caught in a 30 minute period on the way out - then the weather turned a bit.  Great time had by all. 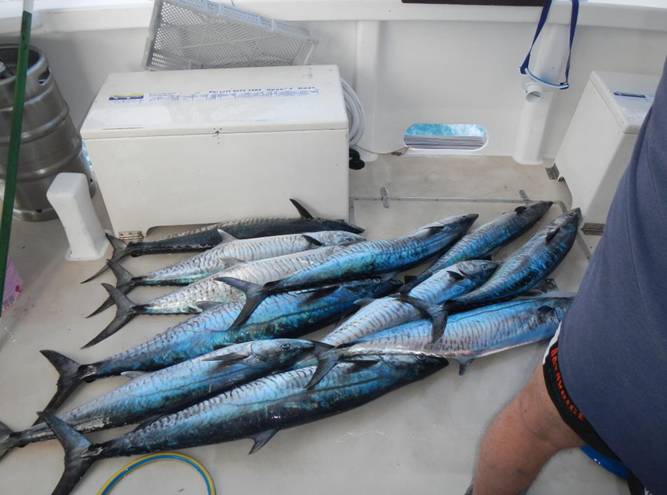 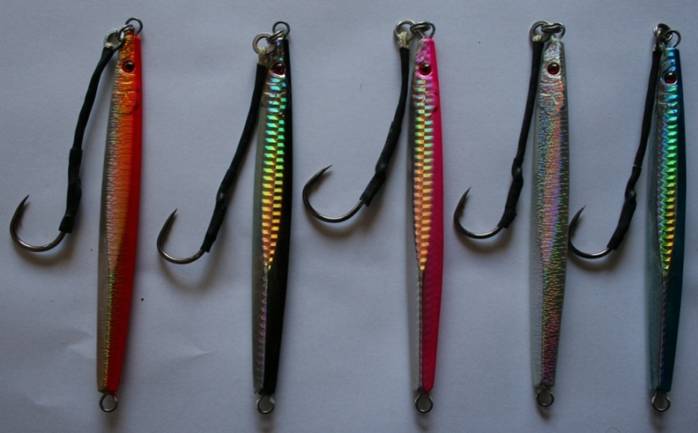 Call or email if you’d like to try an order? 40 gram jigs arrived too, these are only $35 for ten including delivery. How good is that?

Note that, for spinning, you just move the hook and split ring to the tail end.

To politics, and can I just say up front how grateful I am to the contributors who make this part of the weekly report so easy? Many of them not noisy megaphones, like myself J, but they do the research work that is desperately needed to show what an utter farce the marine parks and bag limit processes have become. John Humphrys in South Australia is one of these unsung heroes. Most fishos know that there is no science in the marine parks declaration process, and that the declarations are simply a bribe for Green preferences. But never has this been more blatant than in South Australia, under Labor. Check this out:

In the South Australian marine parks ‘consultation’ process, 85% of respondents supported more - and larger - marine parks. But only 26% of respondents were from SA. So a bloke writing in from Ceduna to complain that he would be locked out of the fishing grounds his family had enjoyed for generations, was cancelled out by a greenie in California who couldn’t find South Australia on a map. This is the giant con of the submission process, whether it’s used for marine parks or bag limits. Nearly 70% of submissions were from greenies outside SA. If there was ever an example of how amoral and selfish it can get, this is it. When opportunistic politicians let the greenies in their department deliver the result they want, it’s bad enough. But to then claim there was ‘consultation’ is just sickening. Which brings me to NSW Fisheries Minister, Katrina Hodgkinson:

First up, full disclosure. I come from a rural family background and am a National Party member. But given the disasters my party has unleashed on Australia – like Oakeshott and Windsor – the radar is always tuned, to detect MPs who put their own self interest before party principles. And in the case of Bodgy Hodgy, the ol’ radar’s pinging like a scene from Run Silent, Run Deep. After a minor bingle where her driver ran off the roadway and into a roundabout (while she was in the back seat!) Dodgy took a week off work, then fainted in Parliament, then began ‘reliving the incident.’ Then, she took three more weeks off. After a refreshing break Dodgy posed for the Herald Sun, looking brittle – while at the same time, trashing her driver comprehensively: 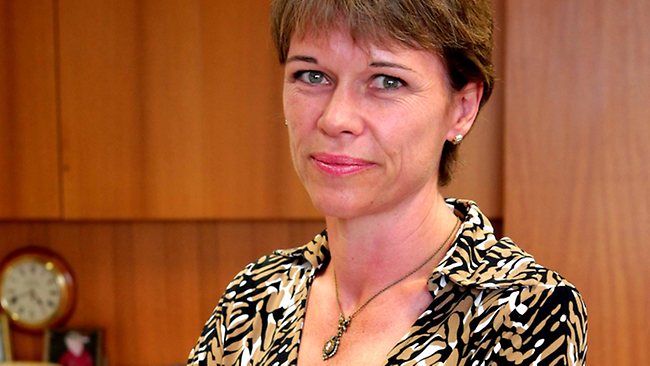 Back when she was a brunette she got her colleague (and potential rival for Primary Industries Minister) Andrew Fraser MP sacked from shadow cabinet, while playing professional victim too: 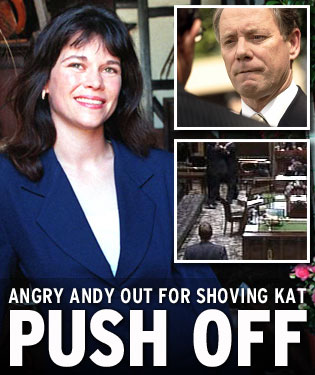 Brace yourself for some classic pol-speak:

LOL. She played you off a break, Barry. While on the topic of manipulative female pollies: 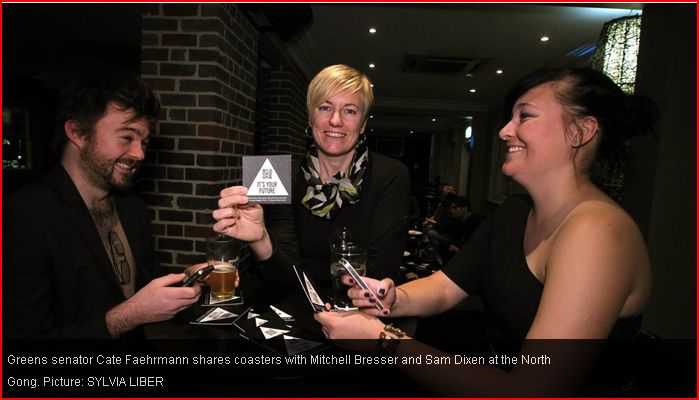 No, it’s not one of those ‘faces of meth.’ It’s Federal Greens candidate Cate Faehrmann trolling a Wollongong pub for support, last weekend. She couldn’t find any, so instead staged a photo op with NSW Young Greens campaigner Mitchell Bresser and Sam Dixon, convenor of the Uni of Wollongong Young Greens. Illawarra Mercury photographer Sylvia Liber was happy to liber to the papers’ readers. Here’s contact details off the Greens Web page: 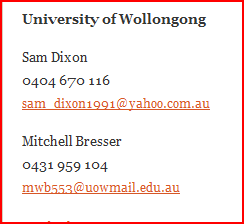 Sam Dixon writes on her Web page about tricks for campaigners.

Sam, you don’t need tricks to fool the Illawarra Mercury. It’s owned by Fairfax, the Greens’ official propaganda arm. Which might explain how their share price has performed over the last eighteen months:

Before we go, just a quick note to thank readers friends and clients, for all your support. Our Web guy wrote this week:

That’s great news, for which I’m truly grateful. Please keep the stories and pics coming, my friends! They don’t have to be giant tuna and makos, every aspect of this sport we love is of interest. Until next week,