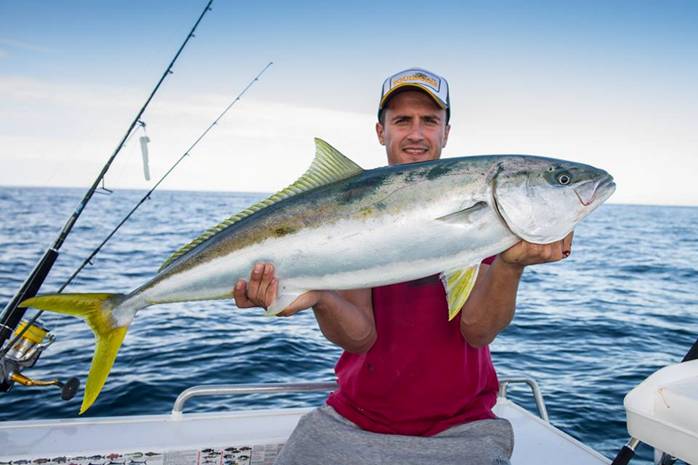 Micro jigged up a few sambos and bonnies then my mate scored this beast king over 1m. Not a bad day at all!

Beautiful fish! Imagine how hard that one went. Rob Frier used his Gomoku and Catalina 4000 to deadly effect: 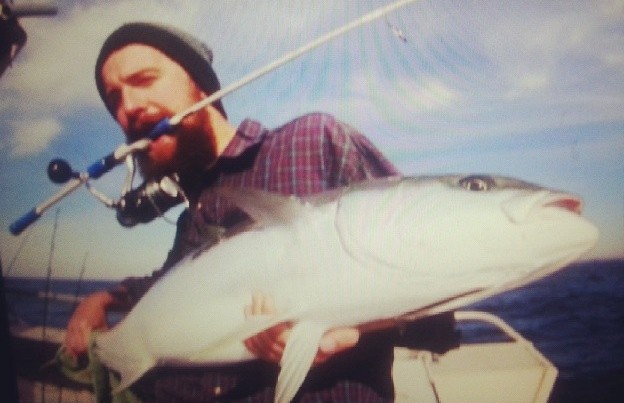 Thanks, Rob! That’s the biggest king I’ve heard of yet on that size jig. Dave Vassallo also out there with the light jigs: 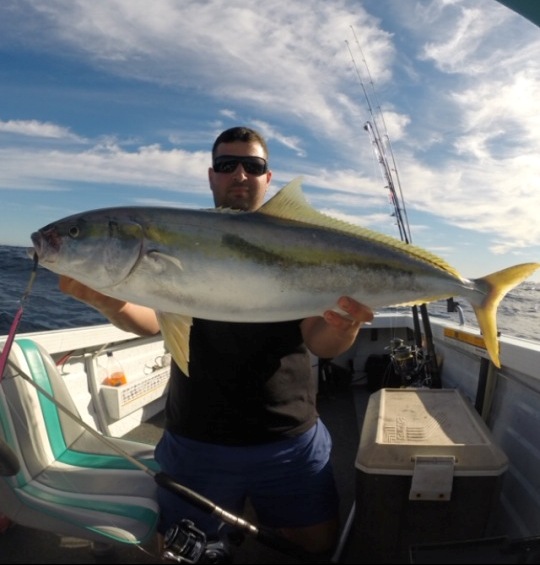 Got a few out there yesterday too Andy using your 100g jigs !!!

Wow mate, the bigger boat has really opened some new frontiers for you. Steve Finn, at The Peak: 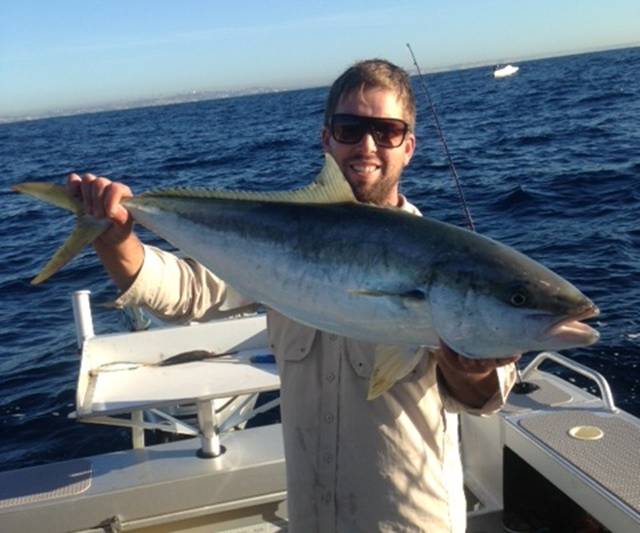 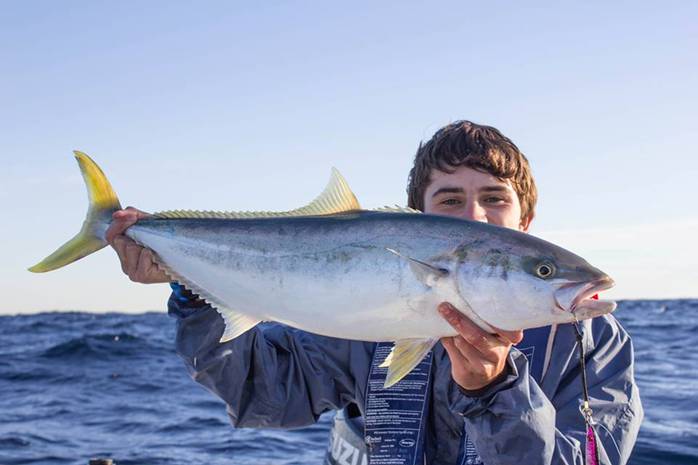 here's a pic of the best one we managed, on the Purple DRS jig

Such a great looking fish, aren’t they? Kevin Olsen jigged the Twelve Mile: 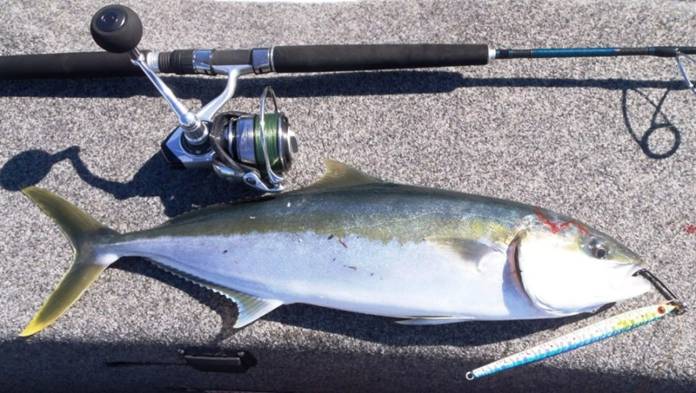 I was at the 12 mile from 9am til just after midday and got that king around 1130. Interestingly got a sergeant baker which followed the jig up to mid water (50mt) before hitting it.

Further south, and Dave Clarke had a ripper session on Friday 23rd: 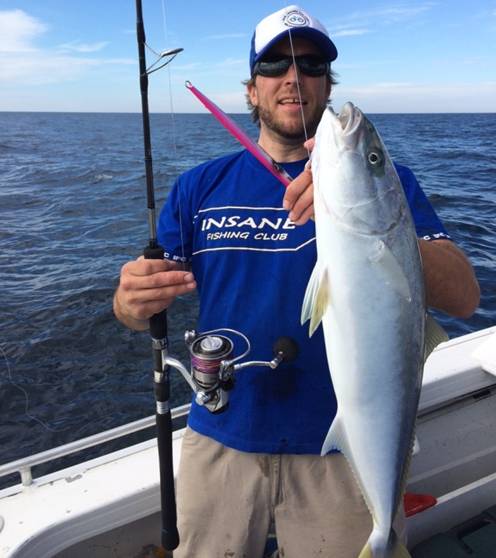 Hey Andrew, Had a cracker day today out from Greenwell Point. Your 400g Jigs work a treat! Getting to the bottom quickly and the kingy's love them. The fish were in 100m water and only came on the chew at the change of tide. Didn't look at a live bait just jigs. 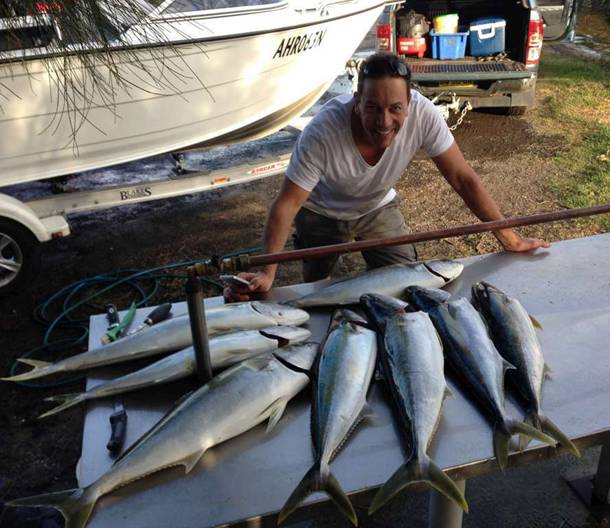 We ended up boating 9, kept 8 and got sharked twice. No Jackets either!! Thanks again for the tackle. Dave

Anytime Dave, what a beautiful haul of gold. Glad to hear the new size jigs paid a dividend for you. Andrew Bagnall gave them a major workout on his Three Kings charter too:

Its BYO tackle and quality gear is the name of the game.  PE8 is the minimum the skipper likes to see, and you need it to stop these mules. He is very protective of his fishery and doesn't like to see lost fish from snapped line understandably. Your jigs did really well,  infact they actually outperformed on the whole trip both in size and in numbers of fish.  Attached are some photos of just a few of the stupidly large kings I caught on your jigs, one still has it hanging out of its mouth! 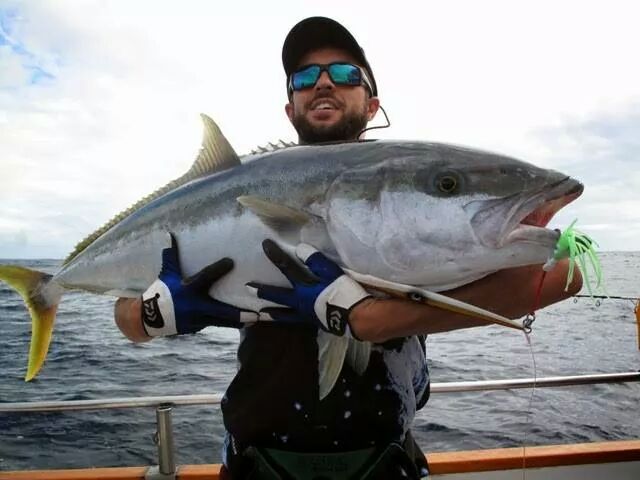 The largest went 46kg on livebait and I had a 42kg which was the largest jig caught fish which fell to a blue downrigger shop 400g jig!  In fact downrigger shop jigs did the damage big time with nearly all my big fish taken on them and several others in our group dominated on them as well! 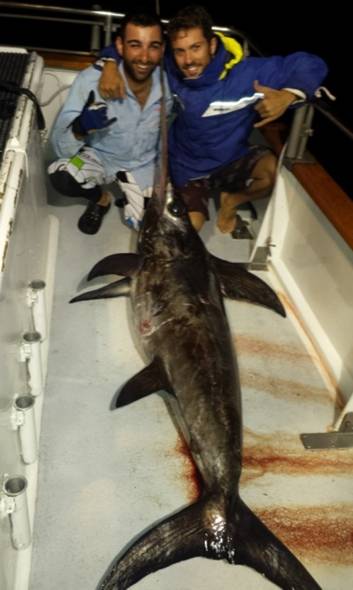 We also caught bass to 45kg and we fished hard at night for swords when the weather allowed, being rewarded last night with our prized catch only 20 mins after setting the baits, and then pulling the hooks on another after a short fight a couple of hours later.

Well mate you’ve made my day if not week with that incredible report and great pics. I have *got* to do a charter on Enchanter, before they nail the lid down on my cheap pine box. JP uploaded a Web page for the big jigs this week too: 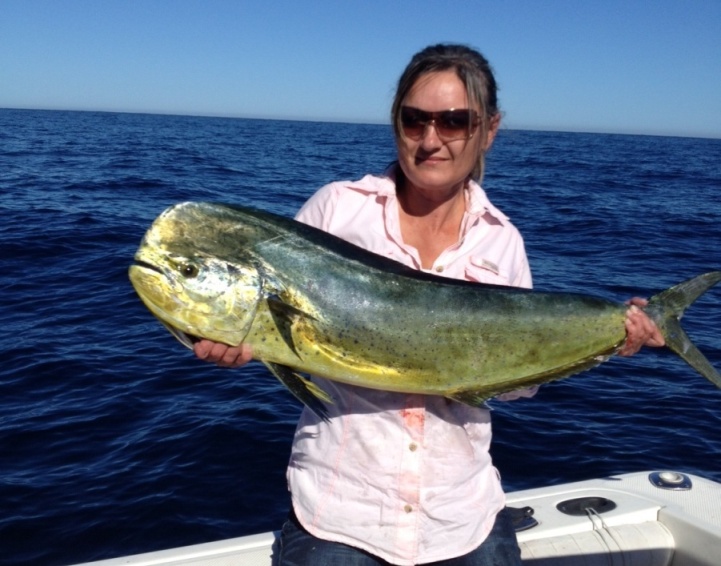 Hayden and Donna are out there again today and just sent this pic in. The dollies are much more skittish today but with persistence and heavy cubing Donna scored this bloke , 1300 mm and estimated 9 to 10 kg. She lost another at least equal one so far. 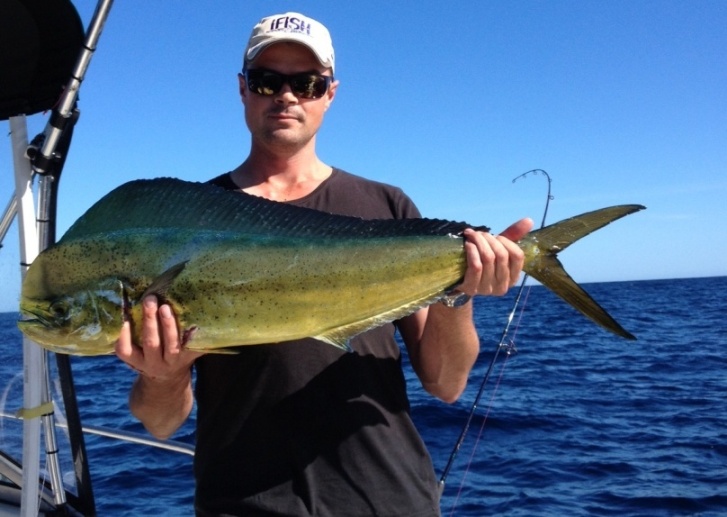 Bob Penfold reports spotties and Spanish still on the tooth at Minnie Water. What a top spot that is: 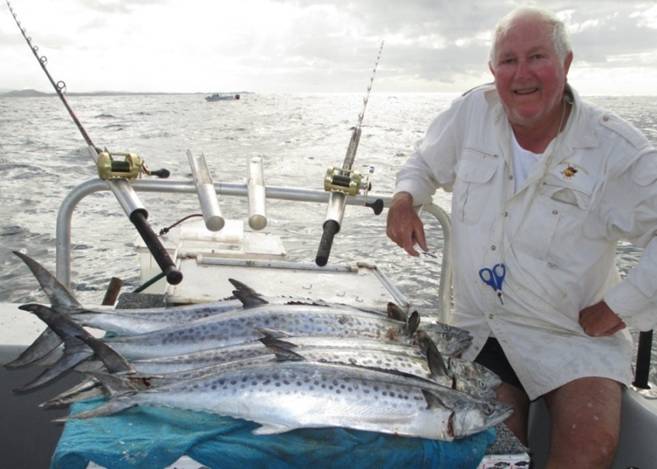 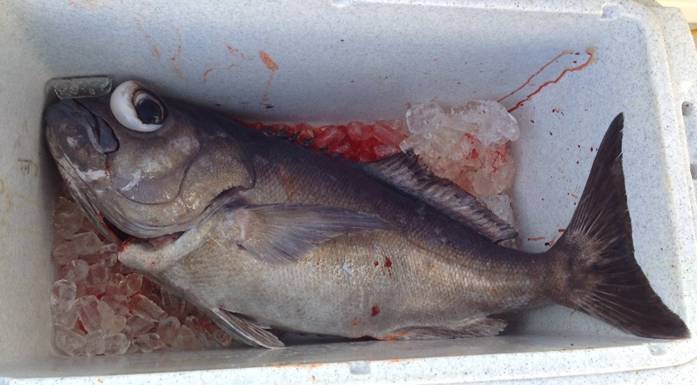 Hi Andy, no reports from me for a while but today is worth a note. Went to Browns with a few mates and fired up the Tanacom Bull 1000 that you sold me last year.  I had only used it once to get some gemfish but the blue eye we got today came in at 11 kgs which we were very happy with. The electric was really good to use and fantastic results.

Excellent Rob, hoping to duplicate your success in the coming week. Blake Matthews: 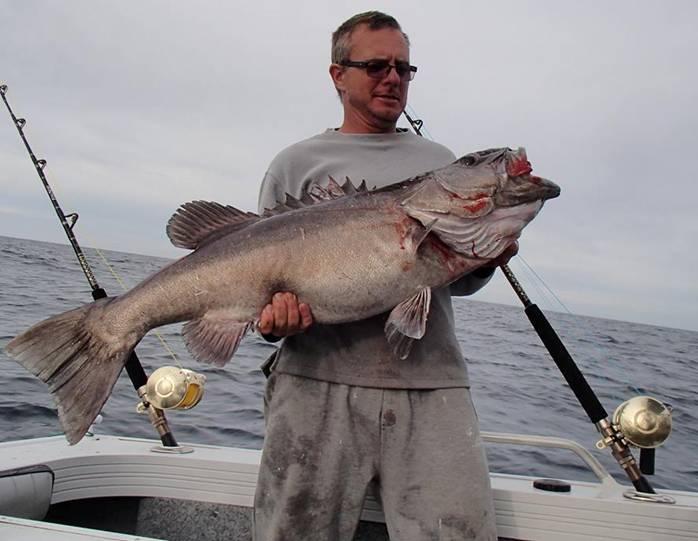 heres a 11kg hapuka we got on Sunday off Jervis Bay

Very nice indeed. I’ve packed the Tanacom and a box of Cali squid for tomorrow’s run, Blake. To boating, and thanks to all those who answered the cry for help on our Facebook page regarding Darren Armstrong’s boat  - stolen, on Thursday night. Six hundred shares and 30,000+ views, that’s gotta be helpful. If you spot it, get in touch? 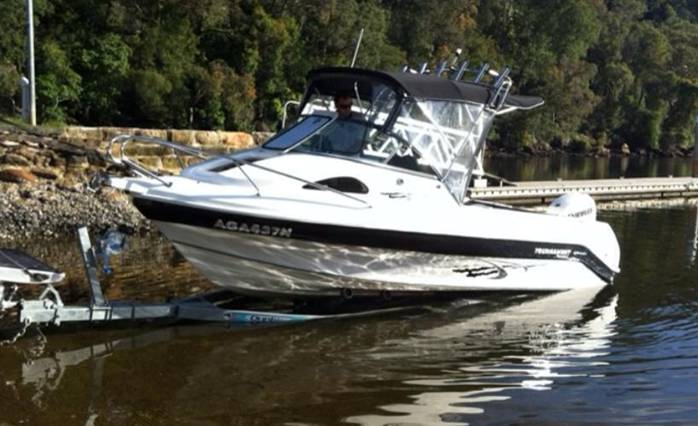 Our Man in the Middle East (Jan) very excited about his new boat. Twin 250 Suzukis, he’ll be unstoppable in this weapon: 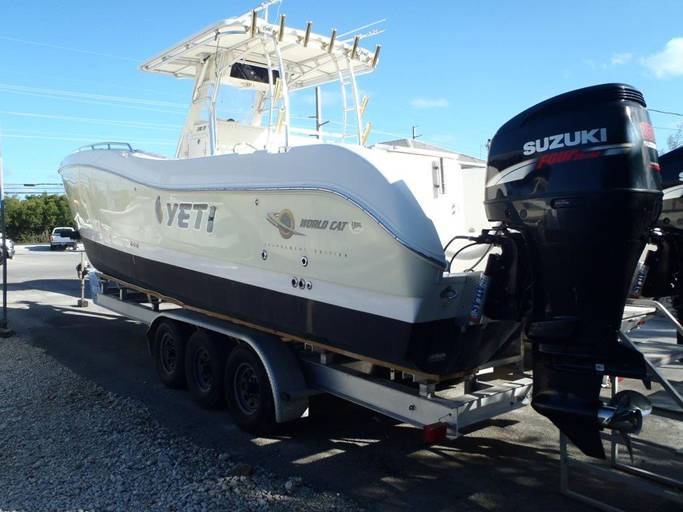 Hi Andrew, I bought a World Cat  330 TE in America. I was plastic wrapped and it is on its way to Oman. 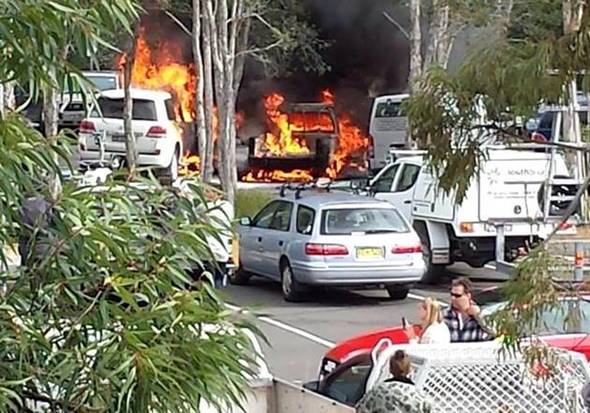 Richard sent this pic in: 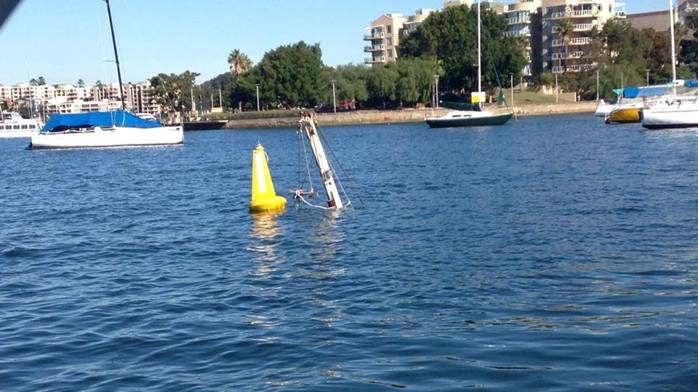 Hi Andy, here's one for your email. My mate who works on Cockatoo Island has watched this 40ft fishing trawler slowly filling with water over the last month and it finally sank today. Another Harbour success story! It was reported to Maritime during the month also.

He! Reported to Maritime:

‘Officer, an emergency! Trawler sinking, around the point.’

‘That’ll have to wait. I’m checking the expiry dates on these lifejacket whistles.’

Hey Andy, I got stopped at the boat ramp today by a maritime officer, after telling him that I've recently installed a new diesel he tells me that because my boat is longer than 6m it should have auxiliary propulsion. What a load of crap! After investing in a new engine and safer fuel type, he wants me to put another engine on with different fuel! He said this time will be a warning, he's dreaming if I'll be following his safety advice!

Dan sends a shocker, a twin hull missing its trailer: 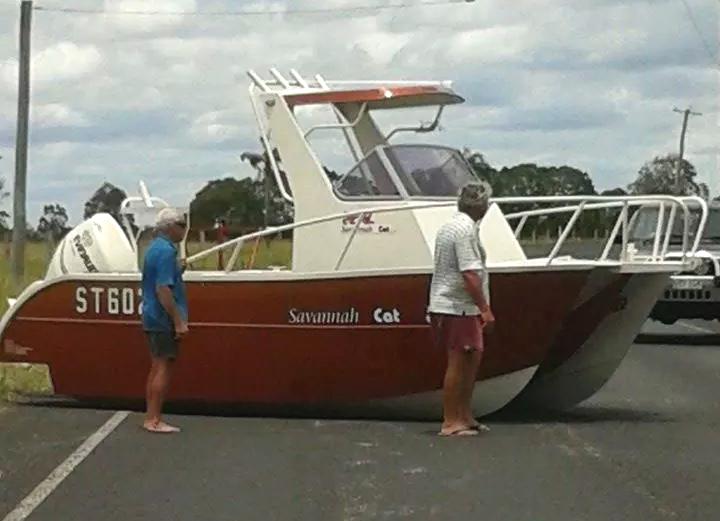 One thing about twin hulls. They sit better on the road than mono hulls.

We shouldn’t laugh, but that is pretty good Rog. Jay Barker reports some tribulations in the Variety Club bash Downriggermobile: 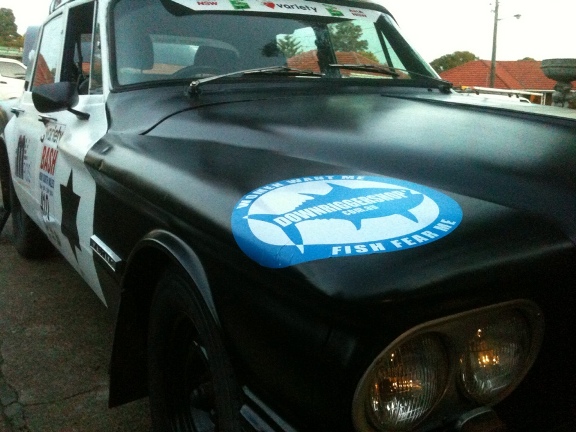 We’ve been having a few issues with the car. Lost all the oil yesterday in the first 5km from a leaking pressure sensor. Then the wheel alignment we had done with 4 new tyres the day before seemed to work its way back to full racing camber and wore through to canvas in less than 300km. After fixing all the problems we thought we’d have a good run today but we ended up with a flat and our 2 spares were the ones down to the belts. After a very slow trip to the nearest town we managed to get new tyres and hopefully everything is OK for tomorrow. I managed to squeeze in time for a fish as we crossed the Murrumbidgee yesterday afternoon and landed this yellowbelly. Lost the lure to timber on the next cast, just can’t seem to catch a break!

I had a leaking pressure sensor too Jay but the ointment worked wonders. Good luck on your date with Twiggy! Article by yours truly in the June edition of Small Boat Fishing; topic, inshore micro jigging. Reviews very welcome, whether negative or positive:

I’ve been hanging for some freshwater reports and this week, the heavens opened. Lads, do yourself a favour and check this out. Only a short video, but oh so good:

Kevin Preston and family on the Monaro: 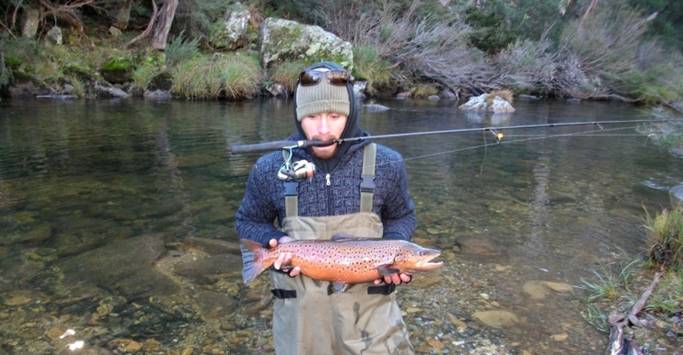 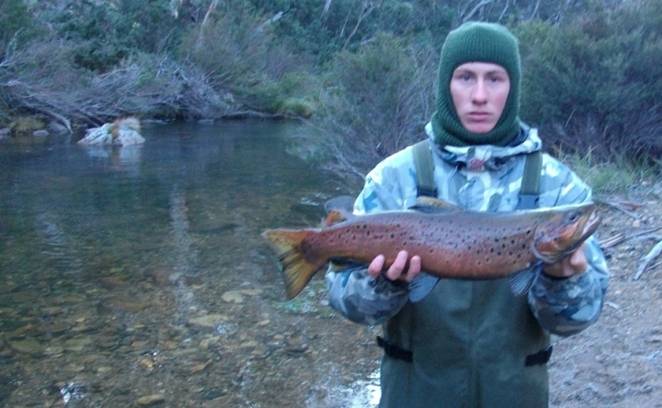 To politics, and so many NSW fishos outraged at the Fisheries Scientific Committee’s (FSC) plan to list gemfish as threatened, meaning yet more fishing restrictions ahead: 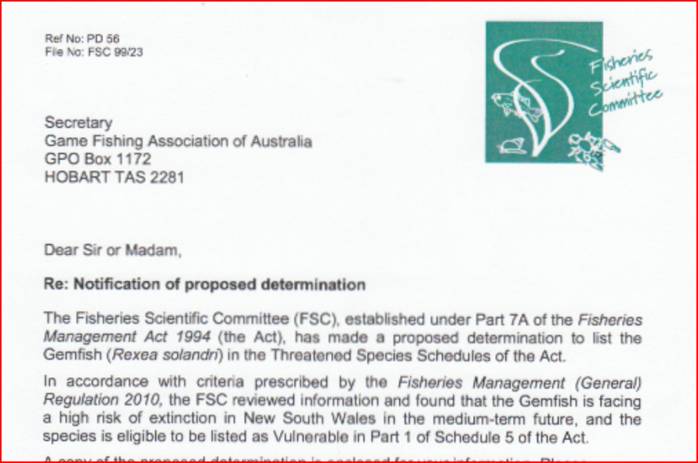 For those unfamiliar with them gemfish undertake a spawning run up the NSW coast every winter. They swarm in their millions at places like Kiama Canyons and Browns Mountain for weeks on end. They are in such numbers that they mark in schools 100 metres thick on your sounder screen: 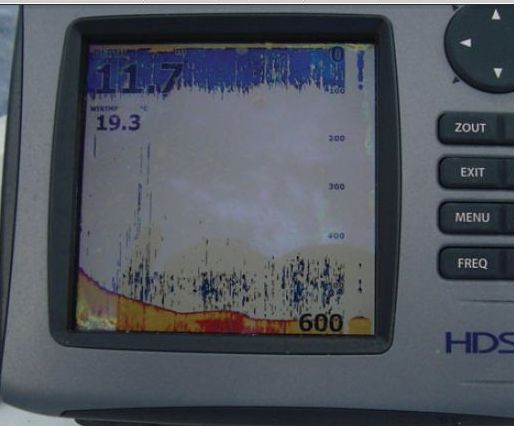 Both the numbers and size of fish are increasing every year. There is no commercial take permitted south of Barrenjoey and the rec take is two fish per person per day: 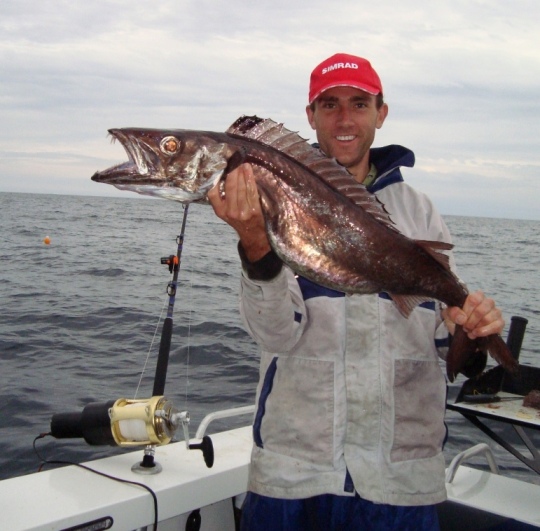 So I wrote to the Committee chairperson asking whether any of those behind this decision had actually been out to the grounds:

Thinking about the Committee’s determination that gemfish are facing ‘a high risk of extinction in NSW in the medium-term future’, and your intent to list them as a threatened species.

That plan has generated strong concern in the Sydney deepwater fishing fraternity, because the overwhelming consensus amongst those fishing for them is that gemfish on the deepwater reefs are growing in size and number every year. That’s easily determined, because sounder screen shots show a band of them 150m thick at Browns Mountain off Sydney during winter, and bites and hook-ups are registered the instant bait reaches that zone. Plus the growth in the size of fish caught each season is easily determined by anyone - like myself - who has been out on the grounds regularly for several years.

Which raises the obvious question. Who on the Committee has been to Browns Mountain recently and observed firsthand the exponential growth in numbers and size of gemfish? I’m assuming a decision so at odds with reality would not be made on second hand evidence alone.

Grateful for any response you might care to share. But if a Freedom of Information request is necessary please let me know that too.

Here’s the response. The Fisheries Scientific Committee don’t even read emails, instead copy and pasting a generic form reply:

I found some interesting reading regarding Gemfish at the link above. Make of it what you will, but the way I read it, it says that whatever protections for Gemfish that were enacted starting in 1988 have helped the stocks of Gemfish gradually recover.

There is one interesting quote in this paper:

"The NSW Fisheries Scientific Committee considered the conservation status of Eastern Gemfish in 2008 and concluded that it was not eligible for listing as an endangered species (FSC, 2008)."

I wonder what is driving this abrupt turn around?

Politics, my friend. Not science, and certainly not any threat to gemfish. I’m lodging a Freedom of Information request and will add your excellent question to it. And of course will keep our readers updated as to their prevarications, delays and non replies. Quite sure we’ll end up taking this one to the Ombudsman – matter of fact, I’m looking forward to it. Thanks to our readers for your support as always and double special thanks to those generous enough to send in pics and reports. Our readers (and especially myself!) in your debt. Cheers,