With winter coming to a close, deep water fishing is the primary focus for many  fishos. Sam Chambers took this giant bass groper: 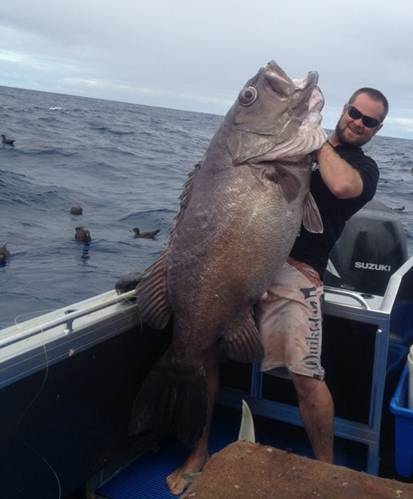 Brad Gray is such a stud he doesn’t need electric reels: 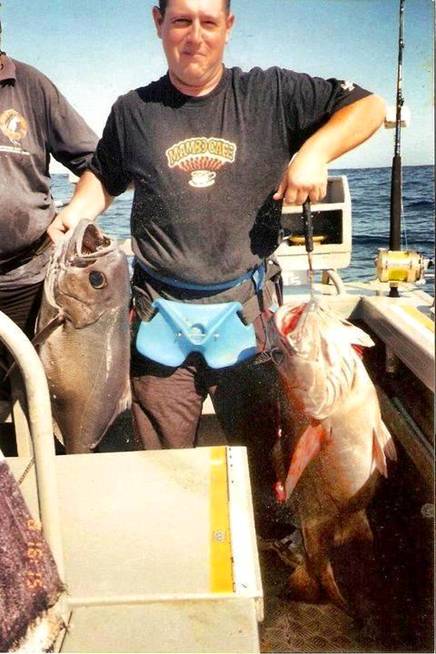 Here's a 15kilo and 11kilo blue eye plus a gemmie was on the last hook I got way back when, all by hand

I’m told he’s got his chiropractor on speed dialJ The wind dropped away to a zephyr on Sunday, while I was up in Queensland on family matters. That meant around sixty boats went to Browns, including a lot of first timers. I’m told it got pretty crazy out there. If anyone would like a digital article on ‘how to fish Browns’ I wrote last year, just send me an e-mail? There are so many little tricks you can use to save time and maximise results, out in 400 metres. George was amongst the scrum on Sunday: 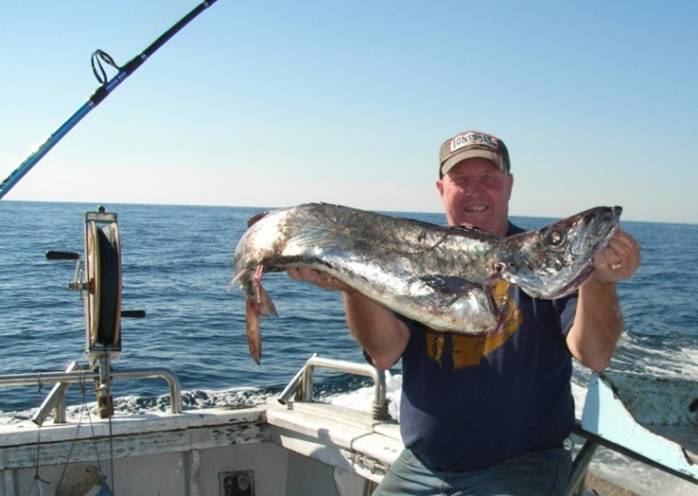 Hi Andy, went to Browns sunday bagged out on gemmies, beautiful day out there, although there must have been about 50 boats out there. Had an argument with another boat that came in close to us and collected one of our lines as we were winding up a catch. When the fish were visible (2 gemmies) the other boat started to wind his electric reel in which they were trolling with. It then ended up being a tug of war between my mates hand winch and the blokes on their electric. My mate ended up dragging they boat close and as he went to gaff the fish it fell off, then while a few words were exchanged the other gemmy also managed to work itself loose. All fun and games George 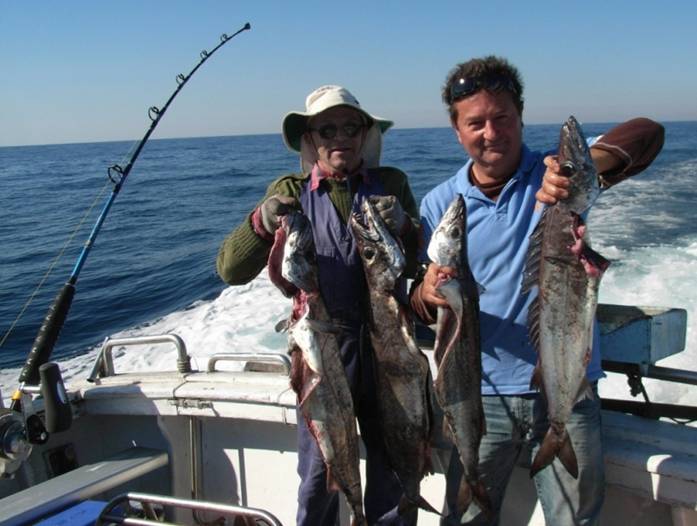 Yeah, until someone loses an eye. Thanks George! Glad to see our bent butt rod being put to good use, too. David Clarke brought home a nice mixed bag: 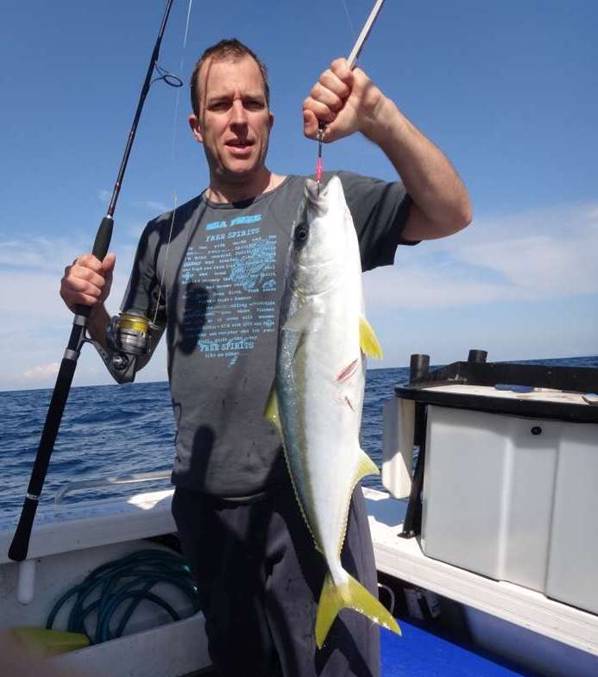 Hi Andrew, thought I’d flick you a quick email to fill you in on today’s session. It’s been a long time since I’ve been able to get out with weather and work not lining up, however Dad and I managed to get out off Greenwell Point today and found the plentiful rat kings were happy to smash your jigs all day…all the way up to the back of the boat on occasions. All were around 50cm to 60cm with two keepers at 67cm and 75cm. We also had some good size Trevally hit the jigs as well. Another bonus (with relief) was that the leather jackets numbers seemed to have reduced in quantity and ferocity. With a quick bottom bash on the way home producing a couple of flathead, though there was a fair bit of water between them. All in all we had a cracker of a day. 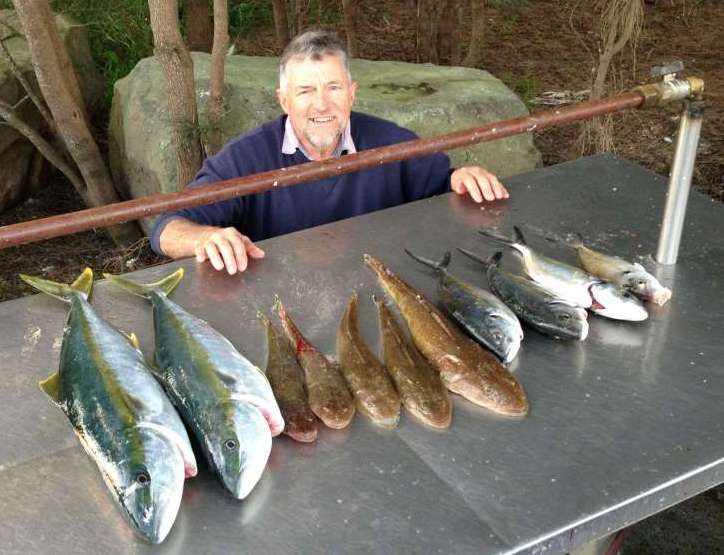 That’s great, Dave. The fish are definitely out there, all we need is a weather break coinciding with the weekend and the ol’ inbox lights up like a Christmas tree, with reports. It’s a shame Father’s Day is on this Sunday because the weekend’s looking extra good:

On the NSW north coast snapper are still biting well for those who know what they’re doing – like Rod Coleman: 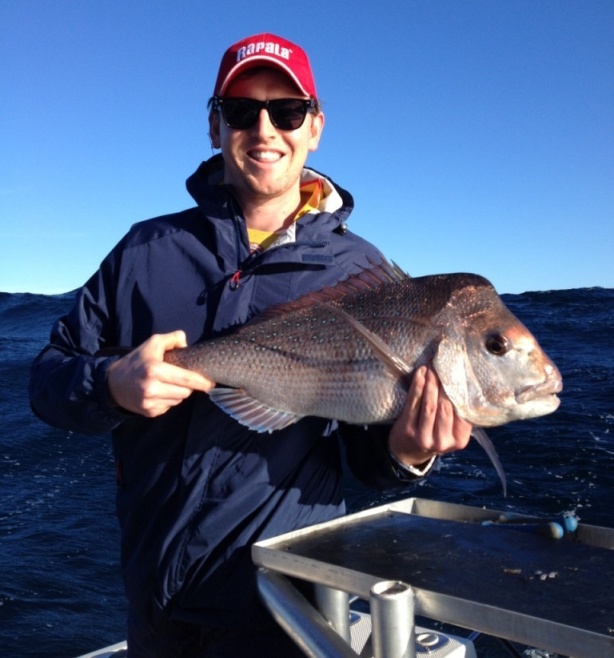 Good morning Andy. A very pleased Nick with his first snapper. He was so happy about it that he released the fish "to give some one else the same opportunity" . Nick is a kayak fisherman who does well on the bass etc. Hayd has got him all fired up with deep sea and he is off to the Swaines shortly.

Noice! Not sure I’d have that level of willpower, Rod. Marc Sams and his young mate Matt found them off Ballina: 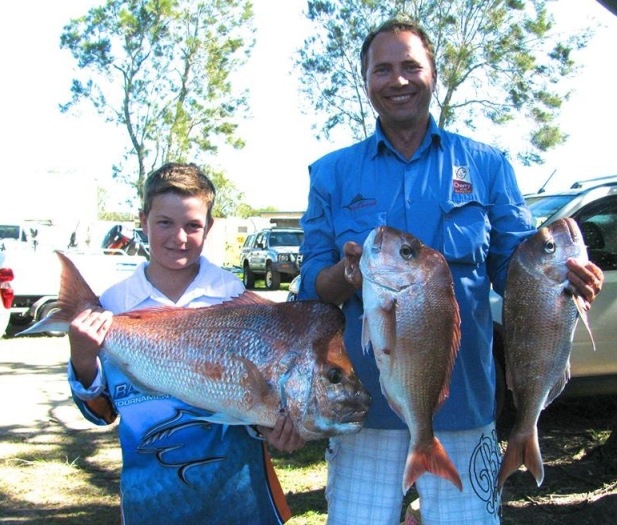 Wow. Beautiful reds, Marc! News somewhat quiet from Victoria this week (so please send some in!) but Jason Selmes is over the moon about this monster. And who wouldn't be: 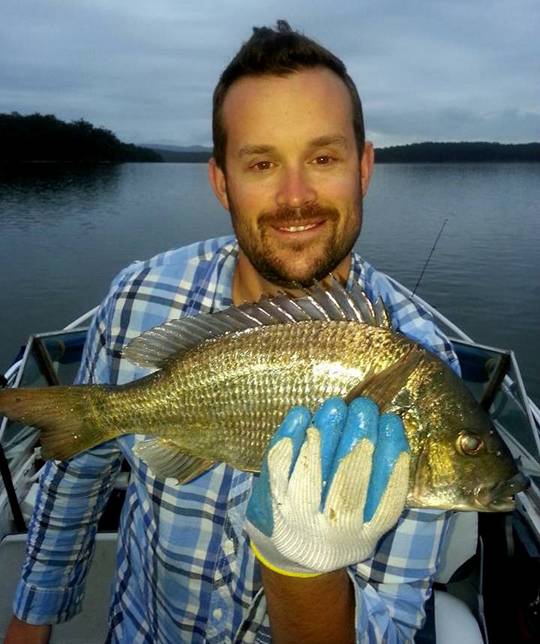 It certainly is mate, congratulations. At $49.50 per kilo (for fillets) Matt L brought home a valuable catch on Sunday: 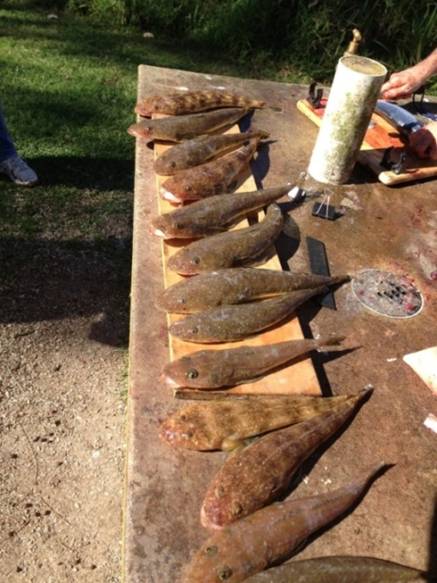 Hi Andy, with westerly winds so crazy at moment stayed closer in on Sunday....Plenty of Fat flatties could be found in 60-65 metres almost straight out from Sydney Heads on Sunday caught on both yellowtail fillets/tuna strips and squid strips.

Hey Andy, still getting quite a few rat kings around Middle Harbour lately. This being the case we decided to put the Go Pro on some line and film the bottom of the spot we have been fishing. I got about an hour of footage so here is a couple of minutes worth. A bit shaky at times but pretty cool I thought!

quite a few rat kings around middle harbour lately. This being the case we decided to put the gopro on some line and film the bottom of the spot we have been fishing. I got about an hour of footage so here is a couple of minutes worth. A bit shaky at times but pretty cool I thought!

That’s really interesting. Good on you, Sam. News Of The Weird this week from Matt Boyce, in SW Victoria: 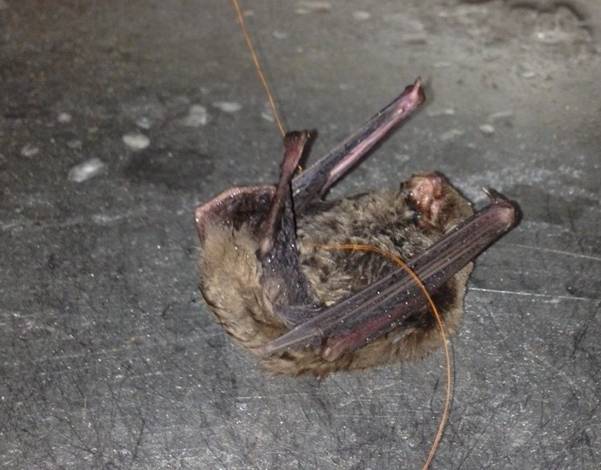 Hi Andy, the weather has been terrible down here with howling winds and driving rain.  I went out last night to cure my lack of fishing anxiety with a little bit of squidding off the local breakwater.

Given it was low tide, the water was dirty and I popped a jig first cast, I wasn't too impressed and thought about packing it in.  Second cast hit the water and almost immediately there was a tug.

Thinking I had got lucky I started to wind in, only to find this little guy had swooped past and snagged a wing in my braid at exactly the same moment the jig had hit the water.

With one eye on the lookout for any soybean eating, hairy armpit greenies (and being cautious not to contract a disease that would see me frothing from the mouth) I gently unhooked him before anyone could try and put a marine reserve status on the Warrnambool breakwater.

Hmmm, interesting take on events, Matt. Frothing at the mouth, has anyone checked a greenie for bat bites? Regular contributor Ross Ireland sends word of a giant king taken across the Tasman:

thought you may like this cobber. Was in NZ last week, saw this in a mag. 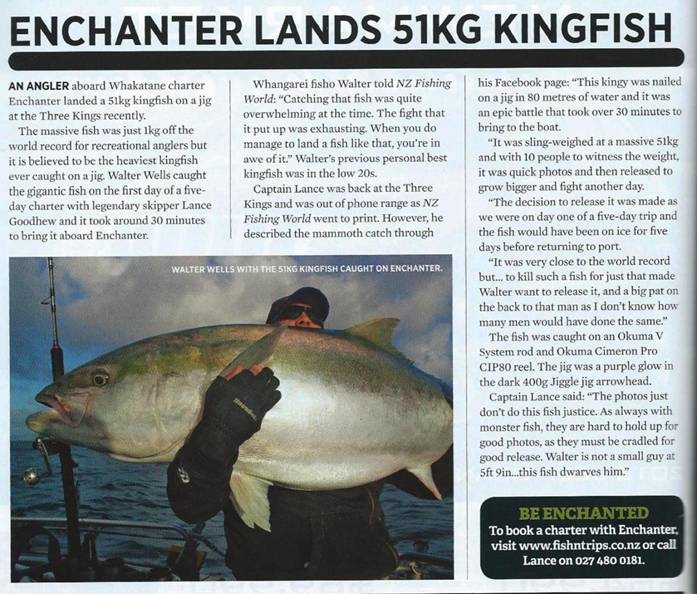 What. A. Beast! One kilo off the world record, caught on a jig and released. All credit to you, Walter. A big fish taken this side of the pond on Tuesday, 82 kilo yellowfin taken by Broken Bay GFC boat All Business:

Across the country and Dave in WA says that samsonfish are on the tooth already: 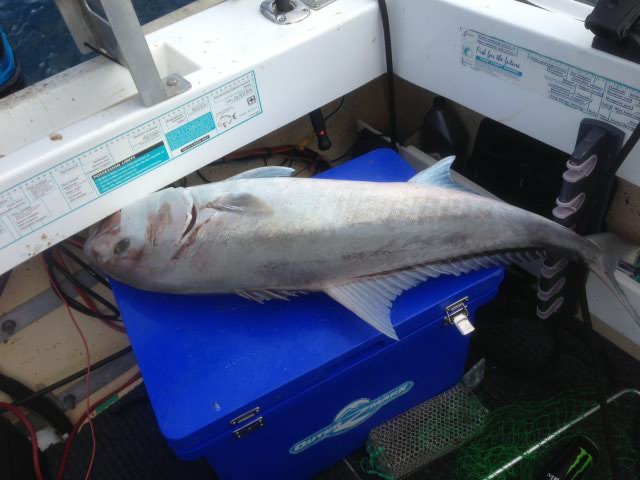 Us blokes over west also sometimes get fish. Stopped taking pics after 10, had about 30 up

Very nice indeed and keep these great pics coming, Dave. In Queensland, Nick took a friend out on the Reef: 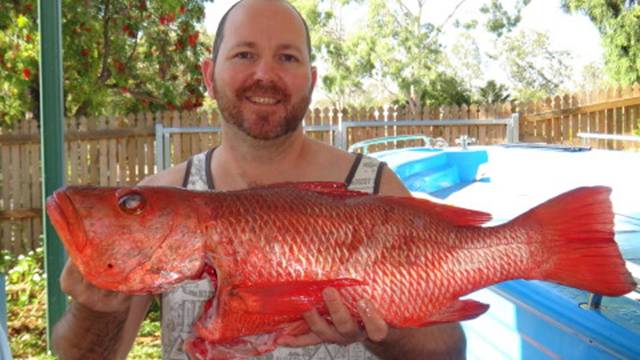 Got out for the first time in ages due to the wind, had a mate visiting from Bundaberg who hadn't done any reef fishing before, the weather was great so we got out to the reef for a night session. Short version is I got my PB reef jack at 73.5cm and we got a good mixed bag of coral trout, small and large mouth nannygai and spangled emperor. He also added a few species to his catch list. Not a blinder of a trip but plenty of fillets into the freezer until the wind drops again.

Solid. Alan’s livin’ the dream, on the Carmel D: 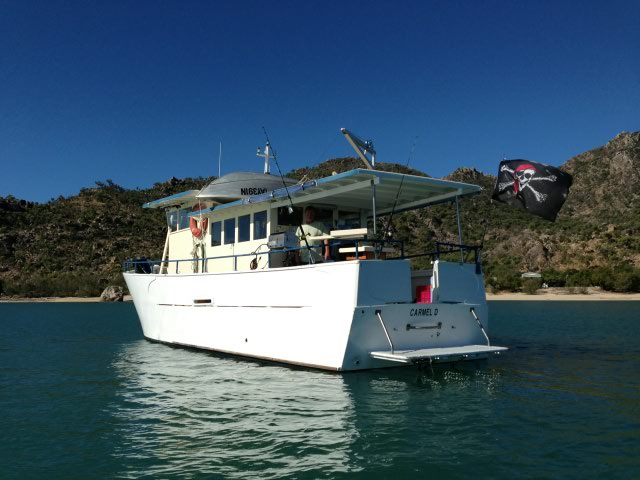 Here’s a mackerel he caught near Cape Upstart using the purple Zuker clone lures we re rigged with wire, for the trip: 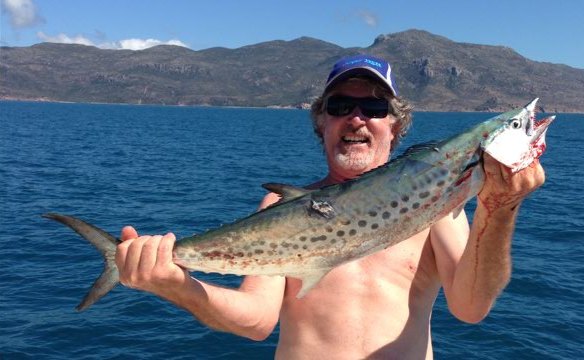 Jolly Roger looks SO GOOD. Further afield, and I was tickled pink this week on receiving a top video from regular crewman Mev. Turns out he sent some of our jigs over to Turkey and a couple of relatives (?) went jigging – using an old solid glass rod with brass ferrule. And, hooked up to a big one, which they boated. Definitely worth a look:

That’s gold, thanks so much Mev. Up at Officeworks this and saw these mini cameras on special. We’ve used these for shooting Youtube videos on the boat and they’ve worked well. If that might work for you, grab one or two because at $35 they won’t last long: 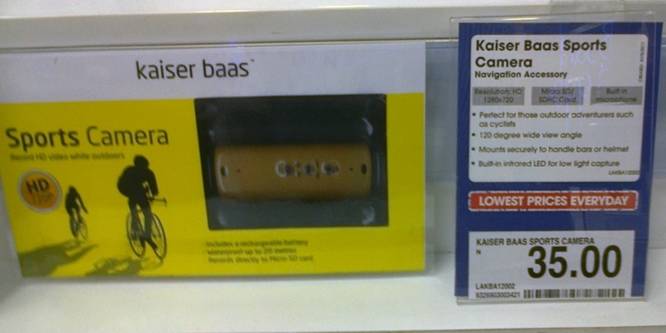 Sincere thanks to Dean Logan from Australian Marine Alliance, for inviting me along to a meeting with NSW Fisheries director Geoff Allan, commercial fisheries manager Andrew Goulstone, and Dallas D'Silva. A very interesting morning! 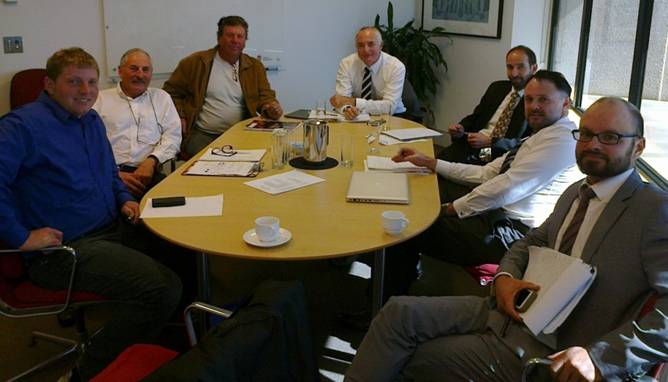 Also grateful to Warringah Anglers for the invitation to their auction night on Thursday 29th: 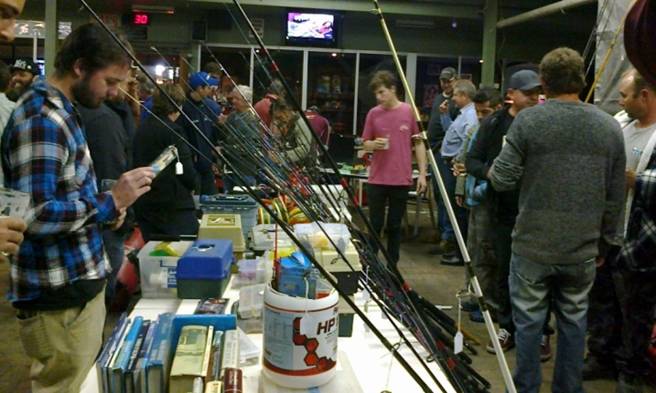 Had a great night catching up with friends and clients although, no Mundoo or San Remo rods found. My quest must continue: 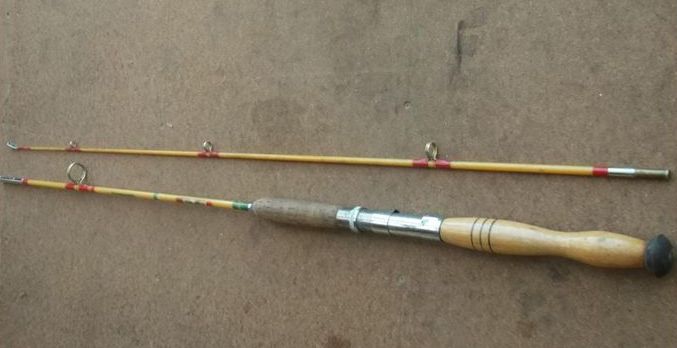 To politics, and NSW Fisheries ‘Compliance Director’ Glenn Tritton produces more spin than Shane Warne on his best day. Barely a week passes without some contrived photo op planted in the gullible regional press, presenting Fisheries officers as some kind of NCIS crimebusters. Here’s this week’s effort, from the Daily Advertiser in Wagga. Leaving the car door open to display the signage is a nice touch: 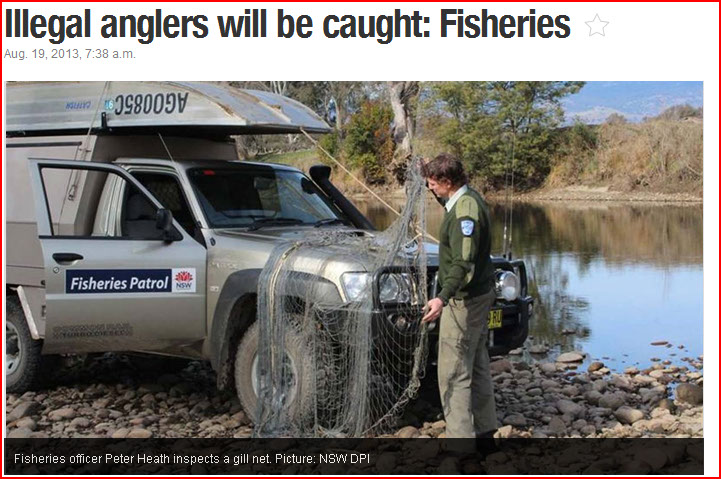 Almost every time, these big busts tie in with an imminent change in the regulations. In this case, it’s the proposed ban on night time crabbing, and yet more planned rules on hoop nets. From the story:

An abandoned hoop net. What a trophy, for Tritton’s Raiders. Glenn went on to say:

Also reminding fishermen and women that gill nets are prohibited, saying they were illegal and indiscriminate in what they catch. “They are a threat to sustainable fish populations, particularly threatened species and immature fish.”

Right. ‘Prohibited.’ Would that be a gill net like this one, Glenn? 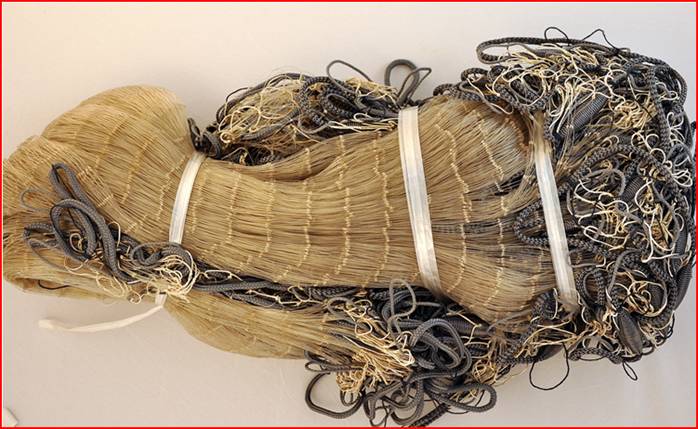 One inch mesh, so nothing gets through?

25 metres long, enough to block most creeks, and catch everything passing up or down?

Perfect for ‘all kinds of yabbies, crabs etc’ – including Murray Crayfish?

And available on eBay for $98, including postage from the Queensland supplier?

What. A. Joke. Tritton sends a Fisheries officer to Wagga for a riverside photo op with a gill net. Meantime ‘Alexeller’ proudly announces he’s sold 30 gill nets on eBay:

And he’s not the only one selling them. Does anyone remember the outrage when Fisheries took $400,000 of our fishing license fees and spent it on ‘research’ proving that anglers needed to be banned from Fish Rock? That was 400 grand down the tubes. Tritton’s Raiders are costing us $2.4 million yearly, paid directly from our fishing license fees: 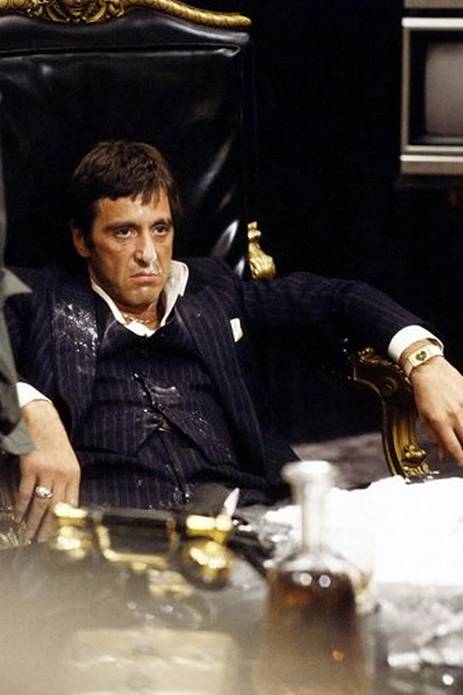 Change the regulations to a ban on sales and/or possession of gill nets Mr Tritton, because right now you’re about as effective as an ashtray on a Harley. Lads, thanks so much for your pics and reports. I really mean that. At Warringah Anglers on Thursday getting nice comments about the weekly email, but without you sending in your contributions there’d be nothing to write about. So please – keep them coming! Fish, boats, wacky events, politics, it’s all of genuine interest. Until next week,