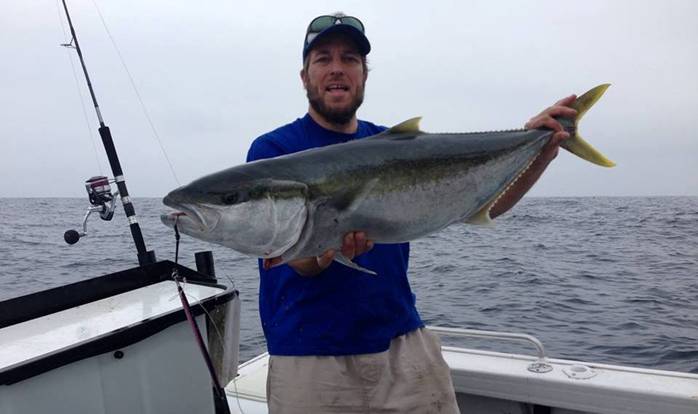 Hey Andrew, quick report from Greenwell Point. Think I was lucky to get this 1m King at the Banks this morning (on one of your jigs) Didn't see another boat land a fish and the radio chatter was saying everywhere was quiet. Cheers Dave 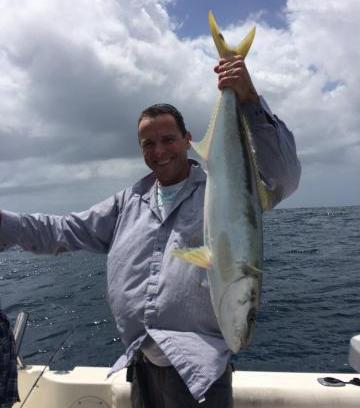 Andrew - headed out today early - ended up a beautiful day on the water. Picked up a few live squid and some slimies and yakkas. . Water temp crept up to 19.5 degrees and the fishing also picked up - although they weren't thick. Pick up this one which went 92cm the others went back. Downrigger worked a treat. All the best Richard

That's terrific Richard and very grateful, for your mid week report. Helps our readers plan their weekend. Of course, it's not all one metre kings. I'll fish for them at any size. Which is why I was pleased to hear of Jack Scoles’ result, from Sunday: 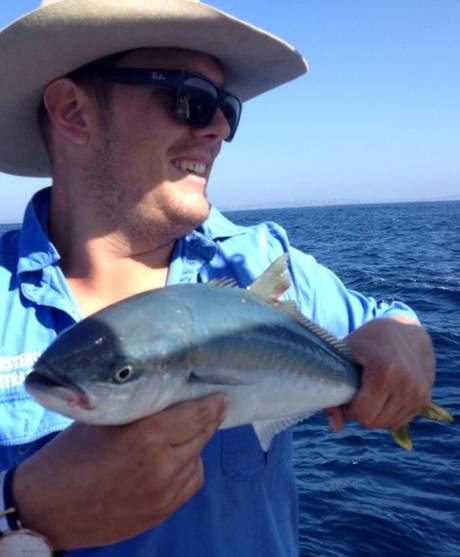 Hey mate Dropped my new jigs I bought from you on Friday, down at the Peak Saturday morning. Got this in the first 10 seconds. 63cm. Unfortunately pretty slow after this.

Jack, I’ll never forget the shock I felt when a client told me you could turn a 63 into a (legal) 67, by grabbing the king by the tail and swinging it fast like a ferris wheel. He’s a funny bugger, so that was probably a joke. Probably. Team Bazley out there doing it too: 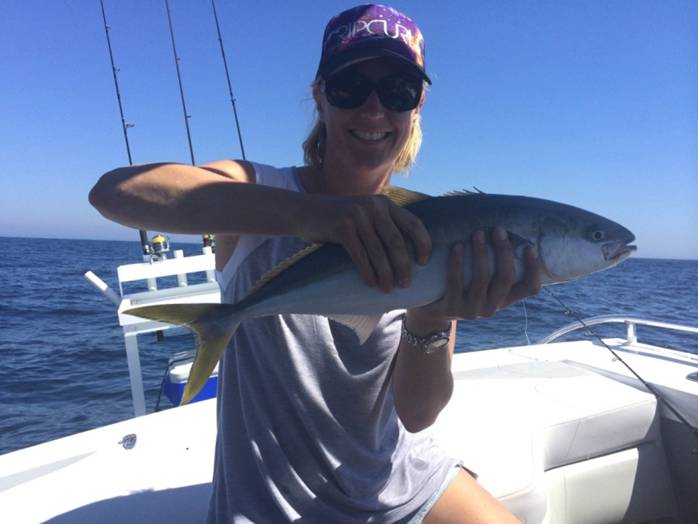 Went to the the Peak and caught nothing, so headed out to Twelve Mile and managed a 55cm undersized Kingfish for my Mum to bring in on the first drop.   We got the Kingy on one of your knife jigs.   We also caught a big leatherjacket.   It was a great day on the water. Thanks Will Bazley

Top result and thanks so much for writing, my young friend. I had a couple of very hard core fishos on the phone today and they both thought that, with a dry year forecast for 2015, the fishing can only get better and better. Hoping that's true! Good weekend weather has seen a lot of families out on the water chasing fish. Alex Whitlock: 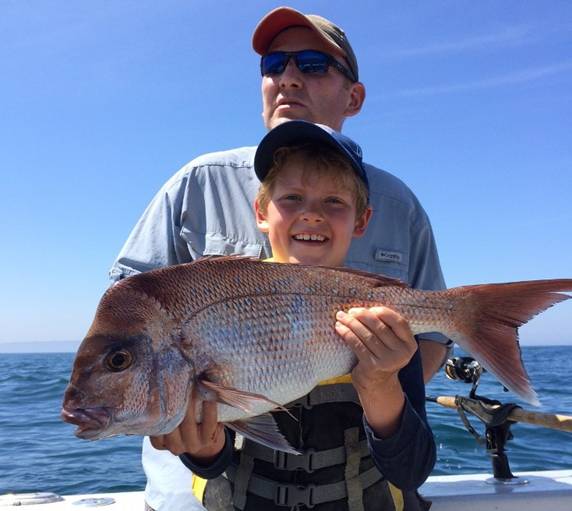 Took young Josh and his dad Greg out on Sunday and the young bloke hooked his first nice reddie.  As you can see he was stoked with the 60cm fish which took him a good 5 minutes to land, fishing in 30m off Broken Bay. Nothing better than the smile on a kid’s face when they land a beauty like that!

Dead right Alex, and good on you for putting Josh onto that nice red. Of course, not all youngsters as enthusiastic. Michael Gates: 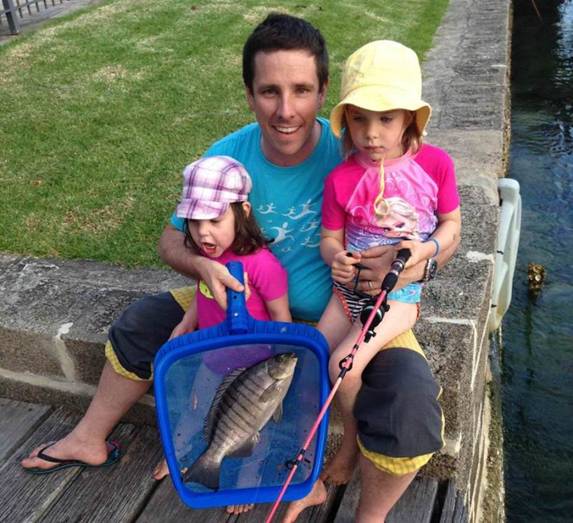 Andy, popped down to the harbour after work yesterday with the family for some digging in the sand and took the daughters rod rigged with a float and some bread hoping for a small bream or yellowtail.  Threw in some burley and saw it being eaten but without my Polaroids couldn't tell what was eating it.  In goes the bait and bang zzzzzzZZZZZZZ.  Little girl freaks out and gives me the rod and after some ducking and weaving around mooring lines up comes a very healthy blackfish.  I have never caught a legal one before so that means eldest daughter has caught a Bigger one than dad.  She loves fishing but hates fish, in fact is terrified of them which explains her facial expression we had to bribe her to be in the photo.  Hahahahaha  Weird eh!!!!!!!

He he. Glad my child rearing days are over. Not that I got too closely involved, anyway. J Dan Falanga land based too: 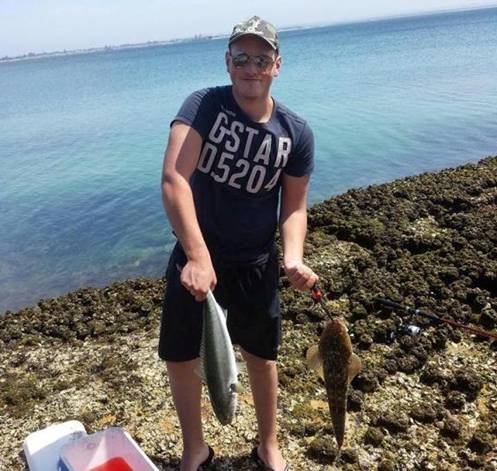 Hey Andy, fished off the rocks at yarra bay, La Perouse yesterday and caught these 2 beauties in crystal clear water !!

Very nice, Dan. The water looks so good. Our Man in the Sand Dave T has been battling – successfully – some health issues recently. So it’s great to hear he’s out there again: 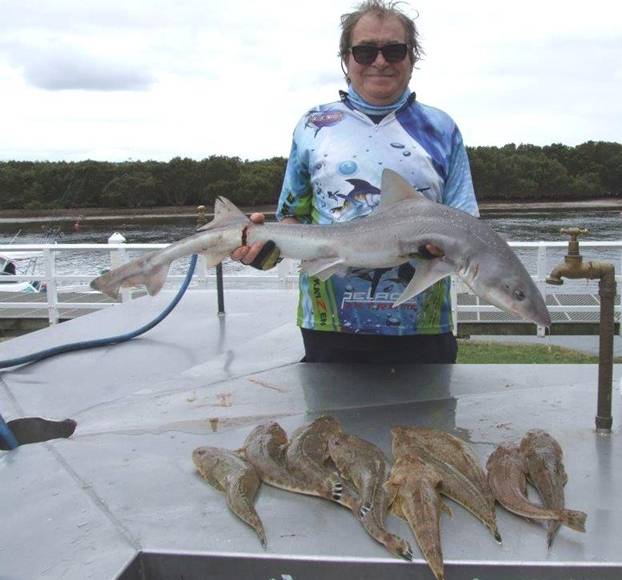 Hi Andrew, health problems have kept us at home for a while but we are back on the water  at last. 3 hours out in JB yesterday provided dinner for 2 for many nights. Gummy shark and flathead fillets provide a culinary delight.

Yes they most certainly would, David. Truly glad to hear you’re back on deck. One bloke who’s been on fire this spring is Dave Rowbotham. Sydney has some hard fished waters but week after week he keeps finding gold: 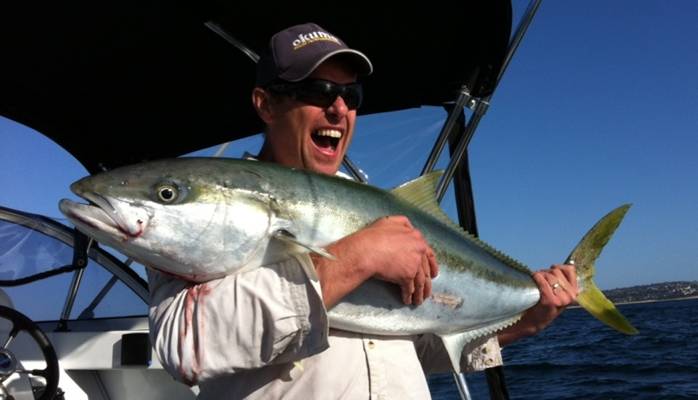 I didn't weigh it but it went 123cm. Happy days

Truly jealous! I'd love one like that. Oh well, the season’s just starting. Congratulations, Dave. For consistent big kings we all know New Zealand’s the place. Jay and Simon headed for Tairua earlier this month, to fish with Epic Charters: 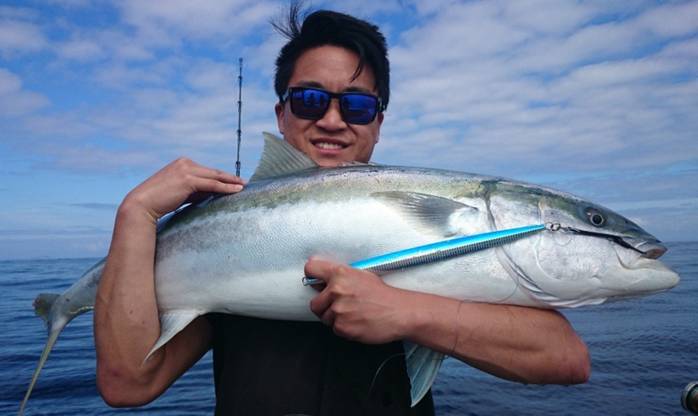 A standard Epic trip at Tairua, your jigs nailing some choice kingies! Only problem is coutas loved them too. Cheers, Jay 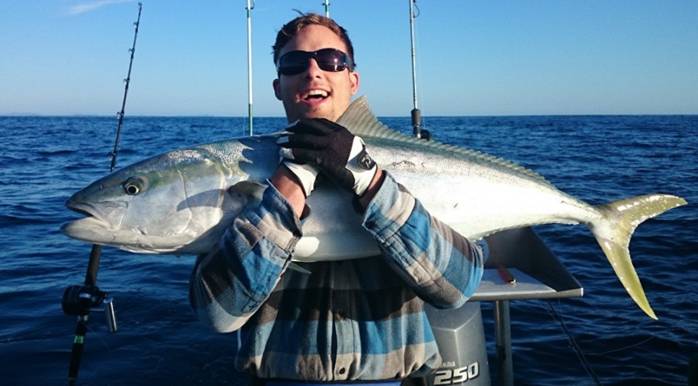 That's brilliant. So glad it worked well for you buddy because I was concerned you’d get some horrible nor westers at this time of year. Even gladder you took the time to send a report and pics. To tackle, and Ronnie from Eden phoned to order one of our big electric 80W reels. He was generous enough to send a pic of his current set up. This one is a belt drive powered by a golf buggy motor: 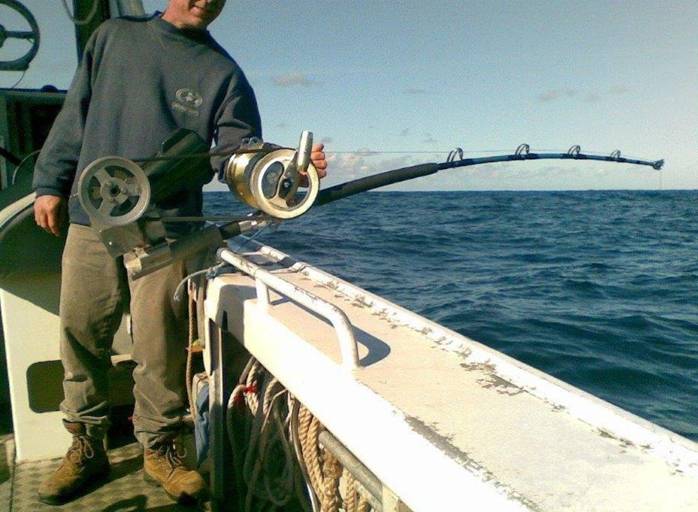 And here's a 25 kilo blue eye cod it brought up from the deep: 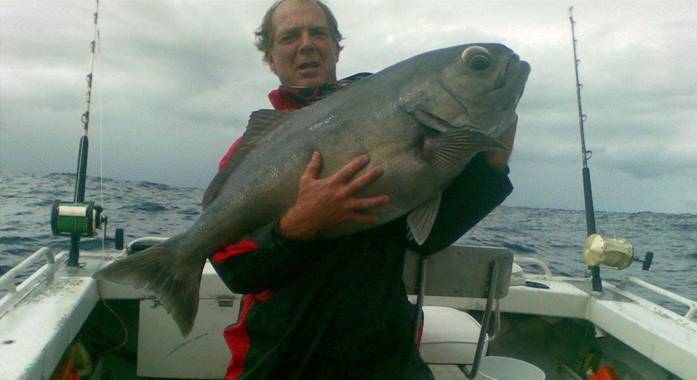 Meantime back at Downrigger HQ we were getting all excited about the arrival of our new micro jigging reel. The Daiwa Exceler 4000 is the perfect match of size, weight and drag for light jigging. Only downside, it comes from the factory with a too-small plastic reel knob uncomfortable, for extended use. So we decided to tune it. First up, Tim fitted carbontex drags with Saltiga drag grease: 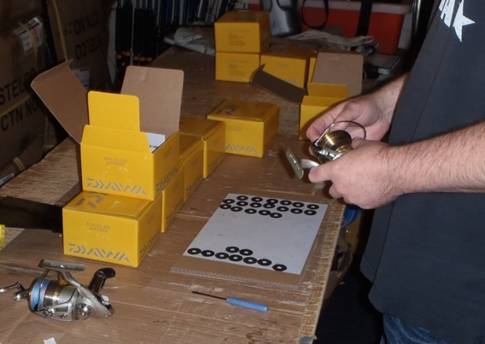 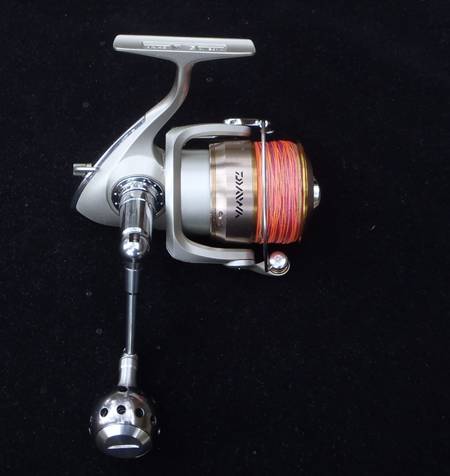 Here's specs and pricing. If you'd like one, please e-mail or call? You won't be disappointed: 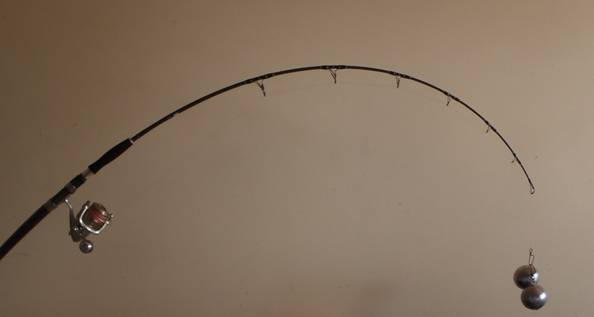 I can vouch for what Andy is saying.

Start up inertia is non existant after the upgrade and you get a heap more usable drag.

I upgraded a Saltiga 4500 and the performance increase was drastic, before the upgrade i tested the drag on scales and it was getting sticky start up after about 6kg, now i can pretty much lock the drag and the start up is smoooooth can run 9-10kg of drag through this reel now.

Funny thing is thats the drag output Daiwa says the reel is capable of.

I agree it can put out that much standard but in my opinion its not usable drag, too sticky.

Boating, and you really do wonder how some of our fraternity get their pride and joy into such a mess: 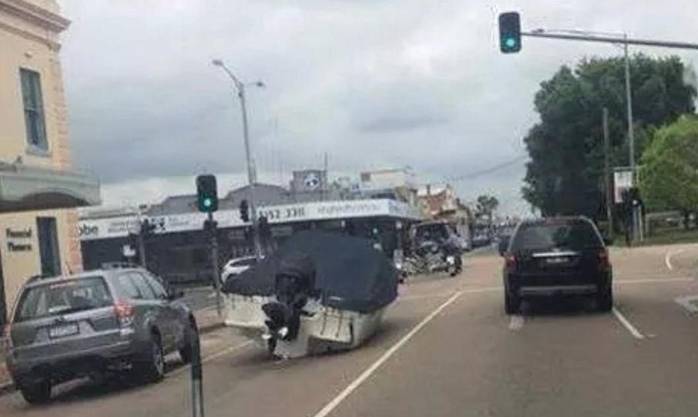 Natural disasters (like recent high winds) perhaps more explainable, like when roving reporter Gatesy spots this maritime mishap. Jim Fleming asks on the Facebook page whether the boat’s name is ‘Scotch.’ Good one: 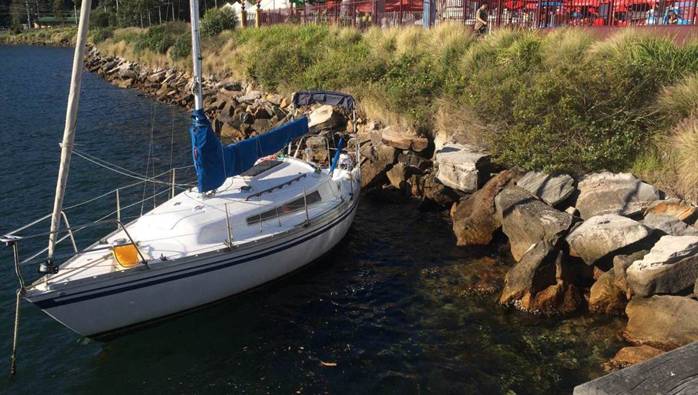 Hey Andy, saw this boat on the weekend that had broken its mooring and had drifted onto the rocks in the harbour. Not sure what happened to it but I bet there is an annoyed owner out there somewhere.

Hoo yeah. On the more positive side, I was very impressed with the paint job on a CC in Peter Webster’s ‘Boat Mag’, this month. Doesn’t grey and white look great: 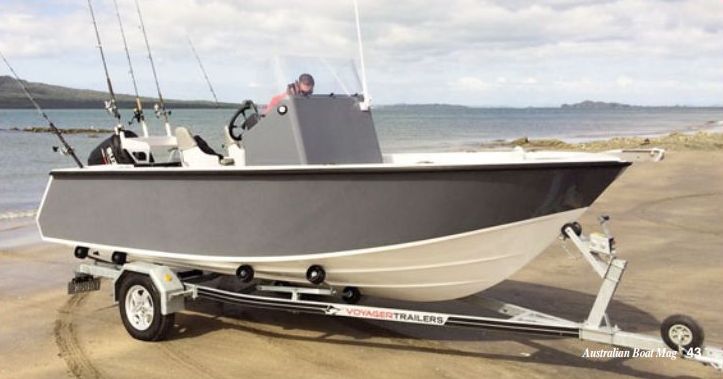 Speaking of the Boat Mag, Peter Webster gets into nearly as much trouble as I do, by giving his opinion without fear or favour. In this month’s issue he writes a piece for blokes who want to get into boating but are a bit challenged, budget wise. His basic proposal being to buy a quality 5m trailerboat with a tired or neglected outboard, and update with a new Parsun 90HP. Hard to argue with his line of reasoning: 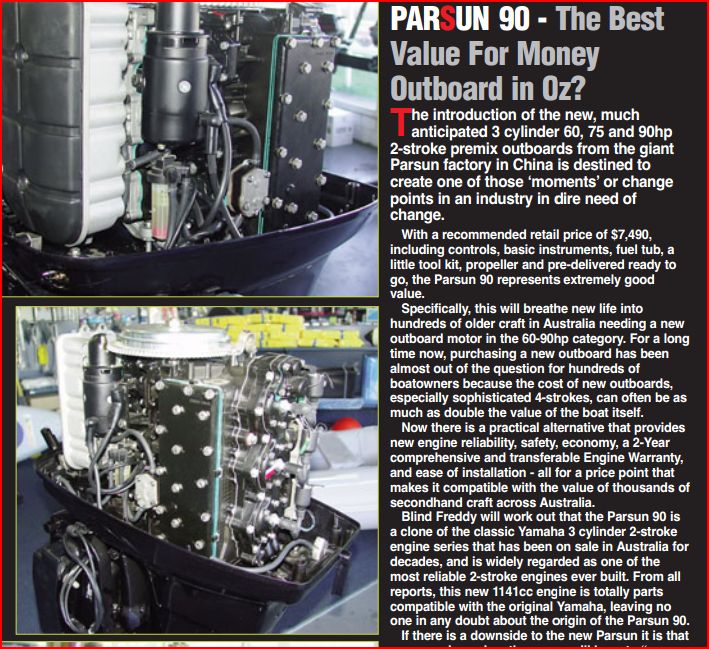 To politics, and before getting started can I just say how much I hate ending the weekly report on a downer note? So many of the political stories covered this year have been about attacks on our right to fish by the same politicians who scramble for our vote at election time. First up, the NSW Labor Party, who’ve learnt nothing from their comprehensive thrashing in March 2011: 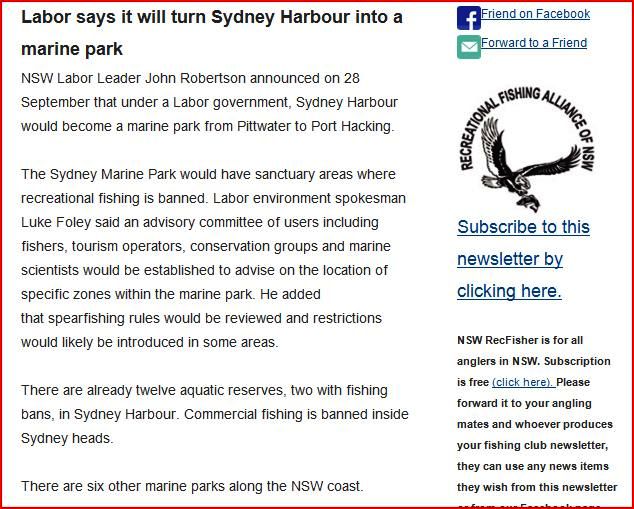 No explanation, no reasons, no conservation value. Just a straight pay for play, lock up Sydney Harbour for Green preferences next March. But is the Liberal/National coalition government in NSW any better? Well, yes. But not by much. Readers will remember our coverage of northside greenies’ plan to close Long Reef, for fishing. According to a story in last week’s Manly Daily that plan has progressed considerably: 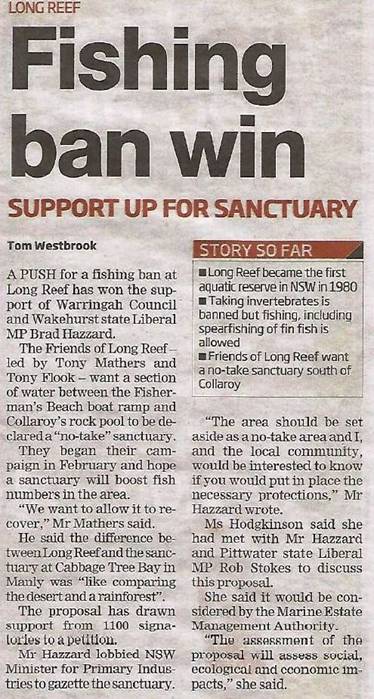 Brad Hazzard is the local MP mentioned in the story above. He’s lobbying Fisheries Minister Katrina ‘Bodgy’ Hodgkinson for a no fishing zone at Long Reef, after being presented with a petition calling for same with 1100 signatures. Note that, like all greenie petitions, most of those signing wouldn’t even know where Long Reef is. They send these petitions around online, and some watermelon in Seattle or wherever signs on. Let’s compare the numbers of licensed fishos on Sydney’s northside with Hazzard’s 1100 petitioners. Would you believe 11495 fishos? Yep. Ten fishos, for every greenie. Just like there is at election time. Yet useless oxygen thieves like Brad ‘Hap’ Hazzard suck up to them and put green interests ahead of those who voted for his government. Here’s the numbers of fishos statewide. I’ve added the number of licensed firearms owners, knowing how fed up that fraternity is with this state government too:

And here’s fishos and shooters on by electorate on Sydney’s northside, those most likely to be affected by the fishing ban:

But these numbers are from March 2010, over four years ago. They’re outdated, but at that time NSW had 239,000 licensed anglers. How much has that number grown, if at all? Here’s figures from November 2013, as supplied by NSW Fisheries:

Sixty percent increase in licensed anglers to 384,000. Total votes correctly cast at the last election were 4.15 million. Meaning licensed fishos are 9.3% of voters. Add the shooters and that percentage jumps to 14.6%:

By way of comparison with the 14.6% figure, the Greens received 10.3% of the vote. The National Party, 12.5%. Something to think about, with the next State election five months away, and both sides of politics trading our fishing rights away for self interest?

In closing, can I say on behalf of our 5000+ readers how grateful we are to those who contribute reports and pics? Your thoughtfulness brings enjoyment to a lot of readers, and they often tell me how grateful they are. I’m grateful too. Until next week,